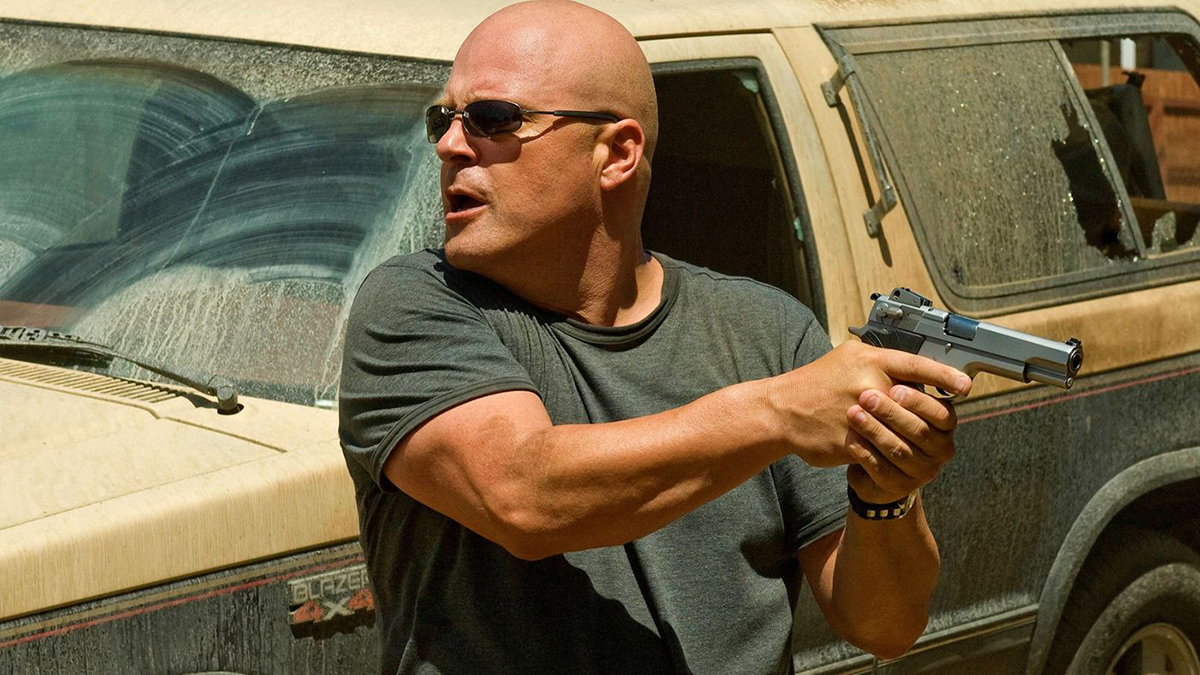 Here’s something you might find refreshing: I don’t have an opinion on the Mad Men finale. For seven seasons, watching Mad Men was the rare pleasure in my life that I enjoyed in an uncritical fashion. It’s not that Mad Men didn’t make me think — I just felt no obligation to shape those thoughts into grand theories and deeply entrenched positions. I do enough of that already. I’d rather appreciate Mad Men as one would a sunset off the coast of Big Sur.

I figured it would be a bad idea to pore over the reactions on Twitter, as I didn’t want strangers ruining my Zen-like, post–Mad Men serenity. I’ve mostly avoided the recaps as well. However, there was one tweet from my friend Scott Tobias, a film critic for The Dissolve, that somehow wormed past my defenses and into my brain. While it didn’t “ruin” the Mad Men finale for me, the tweet did point out how far off it was from the very best series finale ever.

Do people still remember The Shield? It was sort of a thing when it debuted on FX in 2002, back when centering a TV drama on an amoral antihero was still a novel concept. As the Golden Globes are wont to do, they rushed to honor The Shield early on, awarding it Best Television Series–Drama after the first season. The show’s star, Michael Chiklis, also won a Golden Globe (and Emmy) for his portrayal of Vic Mackey, the smug commander of a corrupt corps of L.A. cops known as the Strike Team. Tony Soprano might have been TV’s most famous “likable” SOB, but Mackey upped the ante. Whereas Tony’s badness was embedded into his profession as a gangster, Mackey’s ruthlessness was justified as a necessary guard (or “shield”) against the terrifying underworld he was required to traverse and nullify each day. The veneer of legitimacy that Mackey had as a police officer — and the ease with which he perverted it — was the very thing that made the character so unsettling.

Three months after The Shield premiered, another show about complicated cops started airing on HBO. We all know what The Wire became, but for a few years, The Shield was better known and more celebrated. A decade ago, The Shield was routinely mentioned among the best TV dramas, along with shows like Deadwood, Six Feet Under, and The West Wing that over time have been similarly relegated by critics to TV history’s junior varsity squad. (Meanwhile, 20th-century phenomena like Hill Street Blues, L.A. Law, and NYPD Blue might as well no longer exist.) For those inclined to compare The Shield to The Wire, the latter’s elegant storytelling style and progressive politics jibes better with the tastes of the modern TV aesthete than does the gritty grindcore of The Shield, with its screaming nu-metal theme song and coterie of macho character actors who bust heads and ask questions later.

But what I think really diminished The Shield in the view of history was the emergence of Breaking Bad, the most action-oriented of modern TV’s four-sided A-list canon (with The Sopranos, The Wire, and Mad Men). Like Breaking Bad, the drama on The Shield usually hinged on putting the protagonist in an impossible situation and then watching him squirm his way out. For Mackey, this mainly involved slipping out of IAD investigations into his various crimes, the most egregious of which was committed at the end of the pilot episode. What elevated The Shield (and Breaking Bad) beyond standard genre fare was the acting, the cinema-level quality of the filmmaking, and the writing, which infused Greek tragedy into the barrage of shootouts and screaming matches.

I’m still a huge Shield fan, which I was reminded of Sunday night when I rewatched the series finale, “Family Meeting,” right after the last Mad Men episode. Now, I hadn’t seen “Family Meeting” since it first aired in 2008, nor have I watched any Shield in several years. Nevertheless, “Family Meeting” plugged me right back into the dread and catharsis that had been built up over the preceding episodes. When “Family Meeting” was over 75 minutes later, it was 1:30 a.m. and I knew I wouldn’t be sleeping well that night. My serenity was gone. Once again, The Shield had chewed me up and spat me out. Watching The Shield after Mad Men was like chasing an amaretto sour with several shots of Everclear.

What do we want from a series finale? Is it a feeling of closure, so we can walk away feeling as if the story in which we’ve invested our time has been settled in proper fashion? Is it ambiguity, so we can pick up the story from the storytellers and play out possible scenarios in our imaginations and online arguments for years afterward? The answer is, “Yes, both.” It’s a near impossible demand, and no finale delivered both closure and ambiguity better than The Shield.

I’m about to discuss the end of a series that many people still haven’t seen. Here’s my problem: I would love for more people to watch The Shield. But in order to entice those people, I have to divulge details that might dampen their enjoyment. So, if you don’t want spoilers, I’ll just say this: The Shield is awesome. The cast is great. The guest stars are great. Have I mentioned that Anthony Anderson plays a drug lord and it’s incredible? I swear that’s not a spoiler. Just watch the show already.

The motivating incident of The Shield occurs in the pilot, which ends with Mackey and the Strike Team setting up a new member (played by Reed Diamond of Homicide, The Shield’s spiritual forebear) working undercover for IAD. In the midst of carrying out a raid, Mackey and his sidekick, Shane Vendrell (Walton Goggins), murder their fellow cop, a crime that will haunt them both right up through “Family Meeting.”

For all the awfulness that Vic and the Strike Team commit during the run of The Shield — they rob an Armenian “money train,” profit from various drug deals, and mentally torture Glenn Close and Forest Whitaker, among a multitude of other transgressions — that murder at the conclusion of the pilot is never quite set aside. Rather, the sin festers and grows more inflamed over the next 86 episodes, until Vic and Shane receive their punishments in “Family Meeting.”

For Vendrell, it’s closure. On the run from the police with his pregnant wife and young son, he winds up in a rundown hotel with few options and no hope of escape. Goggins solidified his cult status as a regular on Justified, but his performance on The Shield as a wild-eyed redneck who grows a conscience too late remains a personal favorite, particularly in the final episodes, when his hopped-up desperation reaches a poignant breaking point.

Telling you how Vendrell’s story ends — he puts a bullet into his head while his family lies dead in an adjacent bedroom, poisoned by Vendrell’s hand — technically counts as a spoiler. But the impact of the scene only registers if you’ve seen everything that comes before it. If you know the characters, it’s truly one of the most gut-wrenching scenes to ever appear in a TV show. For a show as loud as The Shield often was, the deathly quiet of the camera’s slow pan across the bed roars loudest of all. It wrecked me the other night just as much as it did when I first watched it.

For Mackey, it’s ambiguity. After he’s cut a shady deal for immunity with the feds, he’s the only member of the Strike Team to avoid prison or an early death. But based on the twisted logic of The Shield’s world, Mackey’s fate is perhaps the worst of all. No longer allowed out in the wild to brutalize gang members or barter with drug kingpins, Mackey is forced to work in an office, where he analyzes crime reports while wearing an uncomfortable, ill-fitting gray suit. His family has left him, as have all of his friends. He looks shrunken at the end of “Family Meeting,” though it’s also implied that he’s about to break the stifling conditions of his plea agreement. Somewhere in my mind, Mackey is lurking the streets of Los Angeles in search of one last bit of trouble.

“None of it is done,” Jon Hamm told the New York Times in response to criticism that the Mad Men finale was too pat. “Matt [Weiner] had said at one point, ‘I just want my characters to be a little more happy than they were in the beginning,’ and I think that’s pretty much true.” On The Shield, which wrapped in much grimmer fashion, the story didn’t feel “done,” but the finale did implant itself with a certain definitiveness on what came before. For a show that might seem oppressively testosterone-heavy, The Shield foreshadows the end of the man’s man “antihero” era in TV that Mad Men has officially closed. It remains the most unsparing portrait of a bad person whose inner rot is exposed to the world, and the finale has a lot to do with that. On Mad Men, Don Draper achieved enlightenment and restored his career. Breaking Bad concluded with Walter White receiving a measure of redemption by saving his surrogate son, Jesse. Even The Sopranos ended with Tony surrounded by his family. But at the end of The Shield, there is only desolation. And it still has the power to destroy you.