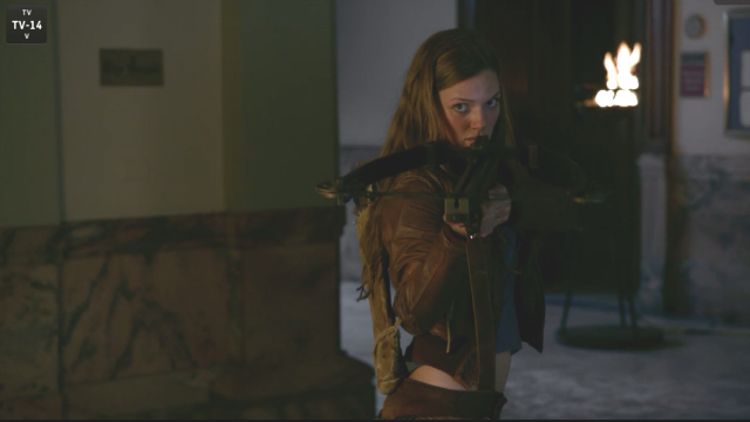 What would happen if the world lost electricity, the lifeblood of modern society? NBC’s Revolution, which premiered last night to (surprisingly?) strong ratings, has the answers: Civilization would quickly collapse. People would start sawing cars in half and converting them into horse-drawn buggies. There would be an acute shortage of asthma inhalers.

And then we’d start murdering each other with crossbows.

As a service to you, the reader who may have skipped Revolution in favor of Monday Night Football or a time-shifted Mob Doctor, we have cataloged every crossbow death — and there were many — in the pilot. Do with this information what you will (i.e., use it to watch only the parts where there is crossbow-delivered justice; the show wasn’t very good once you got past all the crossbow killings). 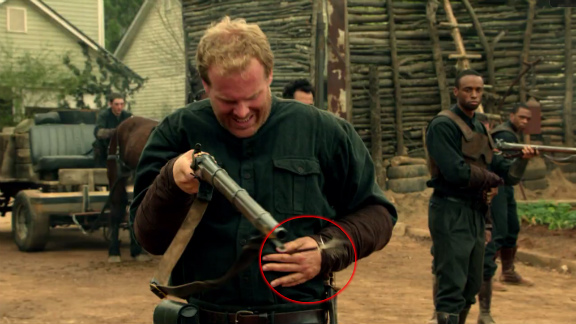 [*Given the arrow placement and the presence of body armor, he may not actually die. But taking into account the sorry, neoprimitive state of medicine in an electricity-free world, our money’s on a very painful, infection-hastened demise.]

12:47 A militia guy shoots a rioting settler with a crossbow, the force of which lifts him four feet into the air.

[Note: It’s shortly after this point that Gus Fring, fed up with the medieval inefficiency of acoustic warfare, starts shooting everybody with a handgun. A guy can only stand by and watch so many of his people get clocked in the head with shovels before he has to handle shit himself, you know? Oh, yeah, there are guns on this show.]

19:28 In a meet-cute, Nate Walker (the show’s Peeta, for Hunger Games fans following along) shoots comely Charlie Matheson in the heart with an arrow … of desire. Fired by his eyes. His smoldering eyes.

23:16 Nate arrives, just in time, to save Charlie and her settler friends from an in-progress rape-and-murder spree inside an abandoned airplane.* Nate’s more of a regular-bow guy, though. Keeps him more in touch with the art of archery.

[*In an electricity-free world, planes fall from the sky — a terrifying sight we’re treated to in the show’s opening minutes!]

24:57 Aside: the wandering settlers come across the ivy-covered ruins of Wrigley Field. Nothing’s killed, except for the hopes of Cubs fans who think Theo Epstein will have things turned around by 2027. Alfonso Soriano’s contract really was the end of the world.

30:03 Danny and Charlie’s uncle Miles (Billy Burke) throws off an intense C. Thomas Howell vibe. As fine as Burke is, it’s hard not to wish that they got CTH for the part. Apologies; this is also not a death, but it’s been seven minutes since a crossbowing and we’re getting antsy. The mind wanders.

36:11 After some bullshit sword fight (swords: booooooo!) escalates, Miles kills an invader with what appears to be a mini harpoon gun. The payload is pretty arrow-like, so we’re counting it. This is our game. We make the rules.

37:04 Charlie breaks up a really boring swords-and-guns melee with a crossbow bolt to a guy’s back, saving Miles from sure death. 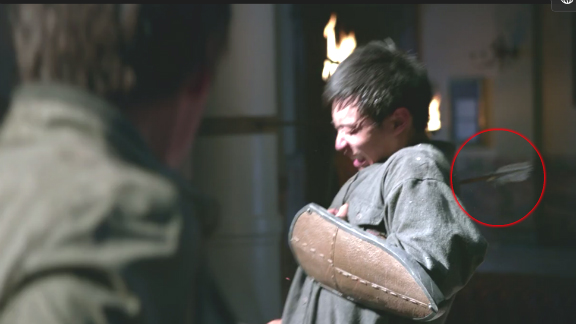 38:08 As Charlie bravely (and unrealistically, let’s be honest) fends off a sword attack with her crossbow, Nate cold-cocks her assailant with his bow. Yeah, we’re counting that. We can’t stress enough how tired we are of swords.

Our minds have been murdered by the crossbow of betrayal.