A Date With Myself: A Nice Dinner and The Lucky One 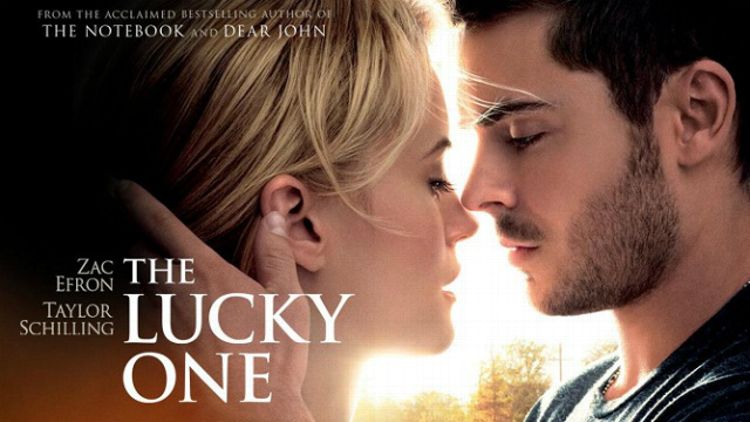 A couple of weeks ago, during a quiet afternoon in the Grantland offices, I noticed Hollywood Prospectus editor and general sadist Mark Lisanti glancing back in my direction. The look on his face could best be described as “devious,” and from his spot two cubicles away, he did a slow Dr. Evil spin of the chair before uttering six terrifying words:

As the office movie-going fanatic, I’d already opened myself up to Lisanti’s cruelty once before. The result was about eight pounds, 40 points on my cholesterol, and 90 minutes of Katherine Heigl that I can never unsee. This time, the look on his face was just as menacing.

“I want you to go see The Lucky One,” he said. I laughed. OK, I said. That’s not so bad. I’ve gone to bad movies. Hell, I’ve gone to a lot of bad movies. Enduring one Nicholas Sparks travesty wouldn’t be all that new.

No, my task was to figure out what merits one might find in The Lucky One, and more specifically, to evaluate its merits as a date-night movie. That meant not only an hour and 45 minutes of Zac laying it on thick, but also a romantic meal for two. Well, sort of.

A date with me, myself, and Zac Efron. Like I said — a sadist.

Looking up show times on Friday night, I figured it was best to just lean into this. That meant a 7:30 showing at The Grove in the Mid-City area of Los Angeles. For those unfamiliar, The Grove is an upscale, outdoor mall between Beverly Boulevard and Third Street that should never, under any circumstances, be visited on a weekend. The drive around the parking garage was a six-floor climb that took about 15 minutes, and when I finally did make my way down, the requisite combination of date-night couples and teenagers was everywhere. As I walked past the large fountain in front of the theater, I could see the lines for the automated ticket machines stretching to the opposite wall.

Since I was already a few minutes late, I tried moving to a line staffed by actual human employees. The result wasn’t much better. Everyone in front of me seemed confounded by the chance to choose his or her own seat, and by the time I reached the front, it was already 7:40.

“I’ll have one for The Lucky One.”

I picked the most secluded seat available, and after taking the ticket, moved toward the theater. Thankfully, the lights had already gone down, and I slid into my aisle seat without too much notice. I turned in my seat to get a glimpse of the crowd. There were no surprises — mostly couples and groups of teenage girls.

I quickly realized that I might have walked in a bit late, because almost instantly upon sitting down, Zac Efron sees a glistening object in the sand that sets this whole thing in motion. Bending down to pick it up, he realizes that it’s a photo of a beautiful blonde with a simple inscription on the back: “Keep Safe.” For the rest of his tour, the photo helps him do exactly that, and taking his (soon-to-be killed) best friend’s advice, he vows to find his good luck charm (her) if he ever makes it back. And you know what? I’m cool with that. Good on him for giving thanks where thanks are due.

Then he walks from Colorado to Louisiana.

Somehow, after figuring out where this woman lives based solely on a lighthouse in the background of the photo, Efron and his trusted German shepherd, Zeus, start on foot toward Louisiana. Apparently, a walking trip from Denver to New Orleans would take about 17 days. And to be fair, we do see him sleep — twice.

Upon arriving, Zac wastes no time trying to tell his mystery woman why he’s there. The only problem is she’s too busy offering him a job to hear it. Needless to say, he takes the gig, and with his tireless work ethic, superhuman empathy, and way with her violin-playing, chess-master son, wins the girl. The prospect of winding up with Zac is what finally causes Taylor Schilling’s character to stand up to her abusive, insane, moronic ex-husband, whom I can best describe as Biff in a sheriff’s uniform. (It’s actually Stan Rizzo from Mad Men in a sheriff’s uniform, but meh.) It’s after she tells him off that she can return home to engage in some steamy outdoor shower sex with this kid.

Not so surprisingly, she eventually discovers — via some expert snooping by Biff the Cop — that Zac has the photo of her that was given to her Marine brother when he was deployed to Iraq. Also so not surprisingly, this is a problem for her, and it’s time for Zac to pack up and walk back to Colorado. Somehow, Zac manages to figure out how it was her brother died, and that makes it all OK. At one point, a tree house falls on Biff and he dies, and then Zac and his lady make out in the road. The timing of that seemed sorta awkward, but I don’t know, I was fading in and out for the last 10 minutes or so.

Of all the impossible elements of the film, the one I was most baffled by stuck with me until the end. As the sunlight shined through the trees onto our star-crossed lovers, I only had one thought — How is Zac’s stubble absolutely perfect through this whole movie? Did he pack a trimmer in that single duffel bag that somehow also holds 20 shirts? Do we never see him on days he shaves? I need answers.

Hoping to piggyback on the sexual energy of tatted-up Zac and his shower-banging, I decided to treat myself to a candlelit meal across the street at Terroni. I’d been before, on a real date with my real girlfriend, and like The Grove, it seemed easier just to lean into it. When I walked in, the bar was crowded with people waiting for tables, and as I walked to the hostess stand, I figured I would soon shamefully join them. Seeing movies alone is one of my favorite pastimes — I probably do it 50 times a year — but outside of a foreign country, I have never gone to a sit-down restaurant alone. This is the moment I’d been dreading all night.

The hostess looked back at me for a moment without saying anything, and then, politely as she could, told me in her Italian accent that she could seat me at the chef’s table in the back.

I followed her through the restaurant to a 10-foot-long wooden table with a view of the rest of the dining room. I sat down and noticed that every other table was filled, mostly with people who looked to be on dates, or friends enjoying a late dinner. The other side of my table was littered with partially empty glasses of wine, and next to me was some Scotch being sipped by what I presumed to be one of the chefs. I’d been there for about five minutes before the first server asked me if I’d been helped. I don’t blame them. I’d be confused too.

At random, I chose a glass of red wine. As the server departed, I was left with the realization that I had no idea how best to conduct myself. I looked at my phone for a minute, put it down, picked it up again. On the wall to my right a black-and-white movie was projected onto the screen. I watched for a bit before giving up on trying to decipher the plot. I thought back to the movie I’d just watched and about how despite knowing the language and having sound, I’d walked out just as confused. What followed was what I imagined to be the conversation I’d be having with my girlfriend about the movie — the only issue being that, ya know, I was alone.

I picked my phone up again, clicked on the IMDb app, and hoped for some direction. Because I often find myself out of the loop about these things, I assumed before seeing the movie that Taylor Schilling, who was given top billing right along with Mr. High School Musical, was some sort of up-and-coming actress. There had to be some reason she was so prominently involved here. So it would be easy to imagine how surprised I was to find that she has starred in, well, absolutely nothing (I’m choosing to glaze over her lead role in the critically adored Atlas Shrugged).

Because I hadn’t expected much, I realize as I go back over my thoughts that I hadn’t given enough credence to the truly awful dialogue throughout. Some Zac highlights:

I’m glad Zac absolved Biff of his sins, because it wasn’t long before our not-so-lovable sheriff was floating downstream under a pile of lumber. It should be noted that the passionate embrace shared by our two lovers just hours after his death was only the second-most-awkwardly timed sexual encounter of the night. No. 1 clearly goes to Schilling straddling Zac in a chair while her son asked from the house whether he could have some ice cream, a handsy session Schilling followed with the not-so-subtle, “Would you like some ice cream?”

Just thinking about it all made me need more wine. A few sips in, I made eye contact with the woman sitting at the table to my front right. Her smile was a combination of politeness and embarrassment. I smiled back before averting my eyes.

A meal that started with a lack of service had suddenly become full of it. My position near the computer in the back brought a server by every couple minutes, and my happiness now seemed their utmost priority. At one point, a manager came over to see how I was enjoying my meal.

“This is a great table, huh? It gives you a good view of the whole restaurant.”

“It really does, I said.

“What’d you start with there, a salad?”

He commended my choice, and during a pause in the conversation, I explained that I’m just out enjoying a date with myself.

“A little me time is always good,” he said. Sure is.

I have two theories for the staff’s newfound interest in me: (1) They thought I was some sort of food writer who came there to review the restaurant and deserves the all-hands-on-deck treatment, or (2) I was a sad, lonely man who was in dire need of genuine human interaction. No, I’m just a guy who treated himself to dinner and a really awful movie, thank you very much. Maybe I was a little sad about how the movie turned out.

Waiting for my car at the valet, I noticed a billboard for The Lucky One a block west on Beverly. It was the scene at the end, post-Biff death, with Zac and Taylor making out in the street. All I could notice was the stubble. How the hell is it so perfect?