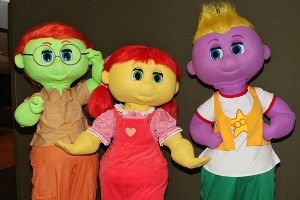 Every year, right in the middle of that grotesquely smug, garrulously sycophantic tradition known as movie award season, come the Razzies, gleefully pointing their finger right at the bottom of the Hollywood barrel to soothe the blackest hearts among us. But the Razzies aren’t just here to make bitter people feel better — at this point, with 33 years in the game, they’re a tradition-bound counterbalance that, through both their diligently chosen nominees and snubs, offer their own particular honorifics. In other words: The Razzie Nominations for 2013 were announced last night (and are posted below) — who’s looking good?!

Battleship turned in a typhoon of a performance, sailing right into the top category, Worst Picture. And caught in the swell, as was to be expected, were Rihanna and Brooklyn Decker, who were apparently too busy being already rich and famous to take acting lessons. But guess which Battleship star you won’t see below? Despite his horrific 2012, Taylor Kitsch has, for now, managed to avoid the wrath of the Razzies. That’s right: Tim Riggins is safe! Meanwhile, Liam Neeson’s nod in Worst Supporting Actor could be a blessing in disguise: Oskar Schindler has the kind of cred in this town to pull a Bullock/Berry and actually show up to this thing.

Last year, Adam Sandler had a Razzie performance for the ages, riding Jack and Jill to a record-breaking 11 statuettes, including Worst Picture. He couldn’t possibly go back-to-back, could he? Could he? Of course he could! Right in the thick of the Worst Picture race, there it is: Adam Sandler presents That’s My Boy. Meanwhile, Sandler can still laugh it off because his last movie racked up $300 million.

The Oogieloves in Big Balloon Adventure is up for Worst Picture, too, and Vanilla Ice’s performance in That’s My Boy was deemed juicy enough for a Worst Supporting Actor nod. And that’s just good clean publicity for those two: A Razzie might just be the thing to get The Oogieloves on the world stage; meanwhile, if Vanilla wins the award for his cameo, it will be a historic “Dame Judi Dench in Shakespeare in Love” moment for the Razzies.

But the big winners are … whoever came up with the nominees for Worst Screen Couple. “Any two cast members from Jersey Shore in The Three Stooges“? “Adam Sandler and Andy Samberg, Leighton Meester, or Susan Sarandon in That’s My Boy“? “Tyler Perry and his drag”? As always: good work, Razzies.

And the rest of the nominees: