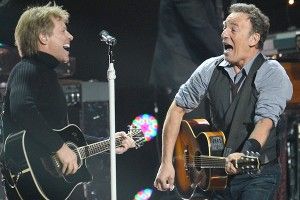 “12-12-12,” Wednesday night’s action-packed Hurricane Sandy relief telethon, offered, for better or worse, more than a few moments worthy of your attention. Let’s first remember that, yes, this was all for a good cause, and hopefully enough money was raised so that no hurricane shall ever again dare bring its meteorological phenomena to the New York/New Jersey area. And now, to the highlights! …

After an appropriately excitable Jimmy Fallon intro, The Rolling Stones kind of casually loped on stage, as if they’d just been topping off a nice bottle of rosé when a sweaty P.A. hustled them over. Mick Jagger gave us a boozy, “Hey, everybody!” and then it was on to the greatest rock and roll show on earth put on by game, but quite tired septuagenarians. No, seriously, much respect to these dudes for doing the damned thing after all these years. And I hope they all got a much-deserved good night’s rest afterward.

Adam Sandler reimagines “Hallelujah” as “Sandy Screw Ya,” and the only reason we know for sure he didn’t think of that five minutes before going on is that it came with a matching PowerPoint presentation, of all the horrible stuff “real” New Yorkers have to deal with: squeegee men, prostitutes, delivery men getting in the way, stoop puke, and, uh, Original Ray’s Pizza closing? Meanwhile, Leonard Cohen was at Jeff Buckley’s grave, listening to him turn.

With precision focus, Billy Joel and his battalion of a band dropped classics, and it’s hard to argue with the crispness of the man’s delivery. But it’s OK to smile, Billy! You’re on TV!

I could only find this 25-second-long video of Kanye’s performance, but it’s an action-packed 25 seconds: It comes right in the middle of his show’s traditional AutoTune rant/speech/manifesto, and it very ably spotlights his recent turn toward a post-apocalyptic Rob Roy/field hockey team captain attire. “Is there a heart in the house tonight?” he asks. There are plenty of them, Kanye, and every inch of every one of them is being used to love your look.

“Recently, some guys asked me to go and jam with them,” McCartney says, by way of introducing this bit. “So I showed up, like you do, ready to jam. And in the middle of it, these guys kept saying, you know, ‘We haven’t played together for years … ’ I finally understood that I was in the middle of a Nirvana reunion.” And so it turns out the reason the Sun knew this was happening was because they got their hands on a copy of the teleprompter script: the quote the tabloid attributed to Sir Paul sounds a lot like what he said up there on stage. So … holy crap, BeatVana actually happened. More importantly, this song kind of slays? Other than the fact that everyone but Grohl looks either terrified or bored, this “Paul Is Kurt” thing was maybe a good idea? What a world we live in!