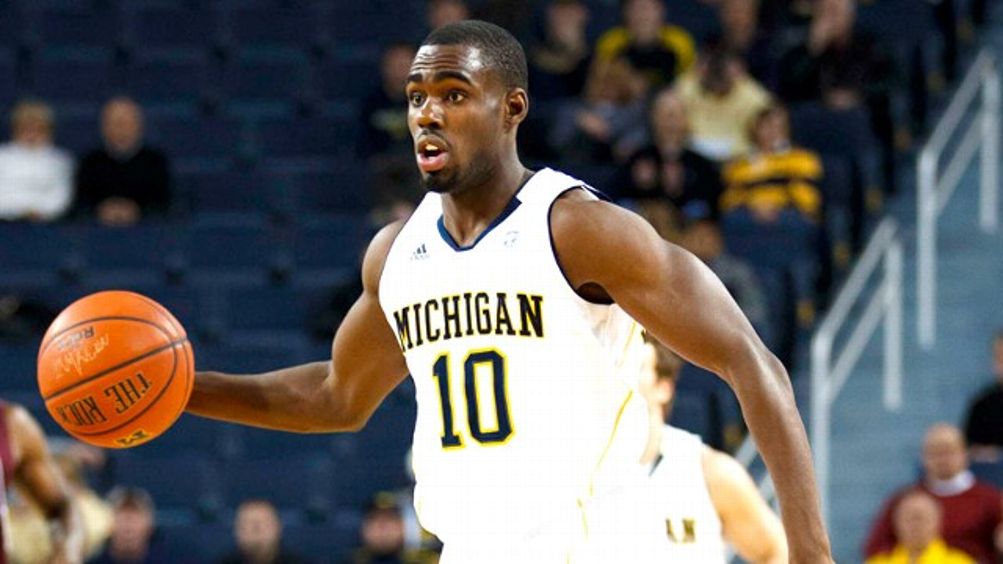 It’s been 26 years since the University of Michigan’s men’s basketball team last won a Big Ten championship. But with one game left in the regular season, the conference title is still within reach. Their success this year is in large part because of shooting guard Tim Hardaway Jr.

Hardaway’s father was a five-time NBA All-Star who played for the Golden State Warriors (where he was one-third of the Run TMC big three), the Dallas Mavericks, and the Miami Heat, but Tim Hardaway Jr. was something of a basketball late bloomer. He grew up an avid soccer and football player, and only began concentrating on basketball when he reached Miami’s Palmetto High School. Despite his pedigree (and the 42 points he dropped on Brandon Knight — who now plays for the Detroit Pistons — in the 2010 state championship game), Hardaway was barely recruited before he chose to play for Michigan coach John Beilein. Last season, as a freshman, he led the Wolverines to the second round of the NCAA tournament, where they lost to Kyrie Irving’s no. 1-seeded Duke Blue Devils by just two points.

With March Madness just around the corner, Hardaway spoke to Grantland’s Davy Rothbart about Michigan’s chances in the tournament, his evolving relationship with his dad, and his NBA dream.

Right now, Michigan is projected to be a 3-seed in this year’s NCAA tournament, which would be its highest seeding since 1998. Realistically, how deep can you guys go?

We still have a chip on our shoulder from last year and the loss to Duke. This year, we’re coming back even stronger, with our heads held high and a sense of urgency. We’ve been learning throughout the season, and our hopes and expectations are high. If we play as hard as we’re capable of playing, don’t make mistakes, and come together as a veteran group, we could go really far.

ESPN premiered the Fab Five documentary, about the legendary Michigan team that made a run to the 1992 NCAA title game, on the eve of last year’s NCAA tournament. Have you and your teammates watched the film? Have you had contact with any members of the Fab Five?

Click here for all of our interviews with fascinating people from the worlds of sports and pop culture.
Most definitely. We saw the movie that night, Selection Sunday, and it gave us the utmost confidence going into the tournament. It really sparked us as a group. I’ve had the chance to meet Jalen Rose, Juwan Howard, Jimmy King, and Ray Jackson, but not Chris Webber. It’s incredible to talk to those guys and take in all that history. They’re always willing to give you feedback about your play, and they give you an idea of what being a Michigan Man is all about and how basketball is supposed to be played here. Jalen always tells me that even though there’s times when I need to take control of the game, especially after [Los Angeles Lakers rookie and former Michigan star] Darius [Morris] left, I have to remember it’s not one man’s team — it’s “the team, the team, the team” — and to keep winning, we need to involve everyone.

Your dad was an NBA All-Star. Did you grow up playing against him? At what age could you beat him?

Yeah, when I was a kid we played a seven-game series every Saturday. I used to go to open gym to play with my friends and teammates, and I’d get there 30 to 45 minutes early so I could play one-on-one against my dad. When I reached ninth grade, I was finally able to beat him. He’d win the seven-game series, mostly, but I knew if I got two or three wins I could tell everybody that I’d beat my dad one-on-one. That’s when I knew he was done.

But even when I started beating him regularly, he wasn’t mad at all. He’d still teach me things I could get better at. To this day, I go up to him and ask him for advice about what I need to work on, and he always does a great job helping me out. That’s not to say there wasn’t a lot of trash talking when we played one-on-one.

What kind of trash talk, specifically?

You must have grown up around a lot of NBA personalities. Which of your dad’s teammates were you closest with?

Actually, one of them was Juwan Howard. I’ve known him ever since I was a little kid. My dad played with him when he was with Dallas, and in the offseason my dad would train in Chicago with [trainer] Tim Grover, and Juwan, Quentin Richardson, and a lot of other Chicago natives would be there. I’d watch them and hang out with them, and Juwan’s son became one of my good friends. Believe it or not, Juwan wasn’t the reason I chose to go to Michigan — I didn’t even know he went to Michigan till I watched The Fab Five.

Alonzo Mourning was another guy who took me under his wing. He played with my dad on the Heat, and I got to be good friends with his son, Trey. Juwan and Alonzo are both still in Miami, and I talk to them any chance I get.

Your dad was famous for his killer crossover dribble, called “the UTEP Two-Step,” while he attended the University of Texas, El Paso. Do you have a signature move, and if so, does it also have a clever nickname?

I like dribbling to my right and acting like I’m going hard to my right, but then pulling it back right in front of me and shooting the 3 — like I did last season against Wisconsin toward the end of the game from the top of the key. I wish I had a name for that move — if anyone comes up with one, let me know!

After retired NBA player John Amaechi revealed in his book that he is gay, your dad said, “I hate gay people, so I let it be known. I don’t like gay people and I don’t like to be around gay people. I am homophobic. It shouldn’t be in the world or in the United States.” He later apologized, but the comments caused public outcry and a media backlash. How did the episode affect things at home?

It was a really hard time for our family. He was so stressed out about the reaction to it. I remember how critical he became of me and my play on the court. After every AAU game, if I played a bad game, I would hear it from him. I wouldn’t want to talk to him because every time I got in the car I’d hear something negative, which would lead to an argument. The whole thing was tearing our family apart. Then one night, my junior year, after a game we won, in the car on the way home he apologized to me and the whole family for the mistakes he’d made and how bad everything had gotten. After that night, we never discussed the issue again. And after that apology, I blossomed into who I am now.

After hitting 37 percent of your 3-point shots last year, you’ve struggled at times this season, shooting 27 percent from behind the arc. What can you do to get back on track, and what else would you like to do to improve your game?

With the outside shooting, a lot of it’s just getting the reps in. I’m one of those guys who stays behind after practice to try and get better. Me, [Matt] Vogrich, [Stu] Douglass, [Zack] Novak — we’ll each put up about 150 to 200 shots. Unguarded, I’ll make seven or eight out of 10. If it’s a good day, I’ll make nine out of 10, or sometimes 10 out of 10. The more reps, the more it translates during game time. I’m also trying to get better at using ball screens and handling the ball. My teammates have developed confidence in me, seeing me find the open guy. But it’s something I can keep working on. And defense. You can always work on improving your defense.

Is this your last season at Michigan?

No. We don’t know yet. I’m not sure. We have to let the season play out. I’m not answering that question, but I can tell you I don’t plan on leaving.

Whether it happens this summer, or a year or two down the road, let’s pretend we’re at the NBA draft, and your name has been called. You’re up onstage, shaking David Stern’s hand. How do you feel?

Emotional. My heart would stop. I wouldn’t be able to say a word. I wouldn’t even know what to do but take it all in. I would just be starstruck because it’s actually happening. If I make it there, I’ll be one of the happiest guys ever — all the hard work and effort will have paid off, and I’ll be fulfilling one of my biggest dreams. Making it to the NBA is a big goal in my life, and one day I hope to conquer it.