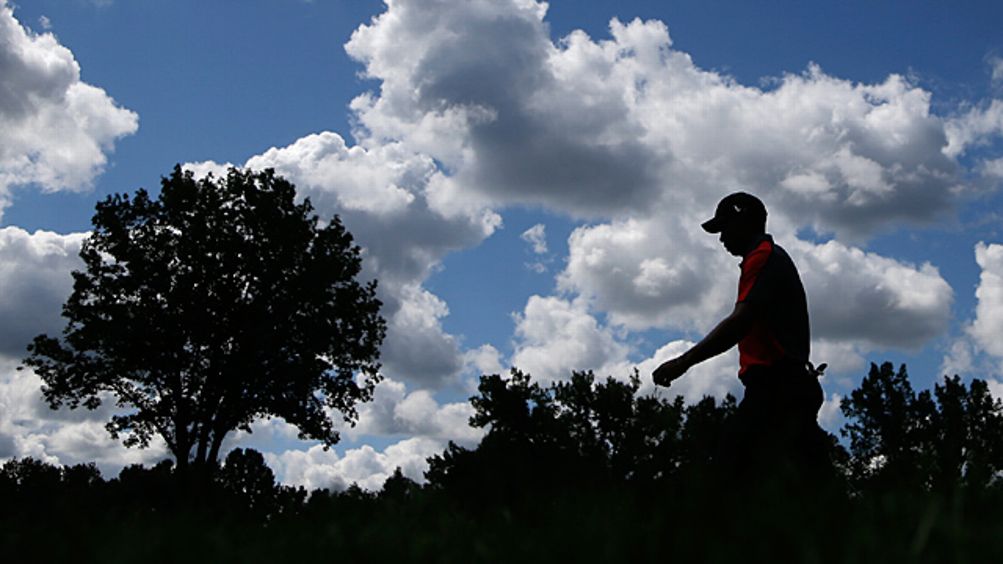 Jesus, I thought to myself, that’s something I do.

In fact, I always do it before I swing a club. I don’t know that it does me any good. Very often, I do it as a distraction and, perhaps, as a kind of preemptive alibi; that way, when the ball goes where it’s not supposed to go, which is very often, I have established that I have termites eating my spine or something. Now there was Tiger Woods, who used to look as though he were made of electrified wire, cranking up the sacroiliac the way that I do. And, yes, he’ll be 38 this December, but there was a time in which he was so young that he looked ageless, a time in which the future blended so seamlessly with the present that the future looked as inevitable and predictable as the past. I met him then, and the aftermath was somewhat unusual, and this was the first time we’d been in the same area code since the afternoon we had spent together, and he’d had his picture taken, and he’d told some jokes, and had wondered whether or not women followed basketball players because they thought black men had larger penises, and now he was down under a tree, doing the same back exercises that I do. He knocked it a little ways past the hole, drained a putt coming back, and ground out another par.

“Having a chance on the back nine on Sunday, I can live with that,” he said later, after flogging an even-par 70 out of the course and finishing even for the weekend, another major championship slipping away. And Jack Nicklaus’s record of 18 major championships, which once seemed so easily within his grasp, now slips a little deeper into the mists of an uncertain future. “It’s always frustrating going out there, and I’m 3 over today, got to 7 [over], and I’m grinding my tail off coming in just to shoot even par for the day. And I’m nowhere in it.”

It was Woods himself who made the pursuit of Nicklaus’s 18 majors the Mount Everest of his career, so it’s hard to muster up much sympathy for him if he’s getting a bit winded in the middle of the North Col. He has won five times on the Tour this year, most recently burying the field just a week earlier. He is the no. 1 player in the world. None of those things matters because the PGA Championship is a major, and he did not come close to winning it, and that is going to be the way his career will be defined no matter how many times he tears it up in Southern California or rural Ohio.

(The cynics in the audience wondered why Tiger couldn’t just join the rest of the golfing world and pretend that the PGA Championship isn’t really a major but, rather, a John Deere Classic jumped up with historical resonance. Walter Hagen, as the story goes, once left the Wanamaker Trophy in a taxicab and it went missing for years. That was the last remarkable thing that happened at a PGA Championship.)

He walks a burdened walk now, even when it is going well. He walks the same way, above par or below, birdie or bogie. He birdies and he tips his cap, but his head is down. He talks to the ball more when it is in flight — “Get right!” “Down, DOWN!” — than he once did. By contrast, on Saturday, Phil Mickelson had a round so bad he should have been escorted off Oak Hill by the EPA, and he looked like he was having more fun than most of the gallery was. His steps were light and his smile was easy. He did not walk the burdened walk. But he did blow town quickly.

Of course, Mickelson won the British Open a couple weeks ago, and he’s not the guy who defined his career success by how many majors he won. Woods was never effervescent, even in the glorious heart of his young career, but he didn’t look the way he does now, coming up the fairway toward the green like an aging farmer coming to work in fields he knows are burnt and fallow but remembers with fondness and with pain the verdancy they once had.

I am not one of those people easily bored by excellence. I do not find the remarkable tedious just because it happens more than once. I still love the dunk contest at the NBA All-Star weekend because, frankly — call me crazy — watching human beings fly is still a class act to me. I never rooted against Tiger Woods when he was winning all the time just because he was winning all the time. People asked me if I did, because of our odd collision back in 1997, when a magazine profile I wrote became one of those Media Things just as the country’s taste for those Media Things was beginning to turn into an addiction. Tiger and his people — and his father, Earl, whom I adored and still miss — said some things about the article that were transparently bogus, but that was all right with me, too. That was the way Media Things worked, as we moved swiftly into the age of the Internet, and Drudge, and Monica and Bill, and as communication accelerated in so many directions that our internal information management circuits all burned out and died. I never rooted against him. I never speculated, as a lot of silly people did, that his success was somehow “bad for golf,” that he hit the ball too far and too accurately for the courses he was playing. Let the game catch up to him, I thought. Let the other golfers catch up to him. (And, it should be noted, it has and they have.) I wanted him to win because I am not easily bored by excellence.

In fact, lost in all the noise about the profile was the fact that I predicted in that same piece, and with considerable confidence, that he would go sailing past Nicklaus’s record. I thought his athleticism seemed boundless and his confidence unassailable. He hit shots designed to cut the hearts out of the competition. He hit shots in April the mere memory of which would destroy other players in August. I didn’t think he could fashion himself a mountain that he couldn’t climb.

Over the years, when his life began to go sour and he seemed incapable of achieving the goals he set for himself, people came to me for answers, and I really had none. Some people write profiles and then live with the subject, one way or another, for the rest of their lives. I am not one of those people. I drifted through his life under extremely circumscribed circumstances one weekend in 1997. What came out of it was a moment in time. He was very young. He was extraordinarily gifted. He did not yet walk the burdened walk.

At the Masters this year, Jack Nicklaus opened up just a little bit on the subject of the task that Tiger Woods set himself all those years ago, and about the difficulty of chasing a figure like Nicklaus, and how that differed from his own career, when he had no Nicklaus to chase. (Nicklaus piled up his majors without thinking about it. All he ever wanted to do was kick Arnold Palmer’s ass.)

“Obviously the older he gets and if he doesn’t win, it makes my record move out further,” Nicklaus said. “But I’ve said it, and I continue to say it, that I still expect him to break my record. I think he’s just too talented, too driven, and too focused on that … From this point, he’s got to win five majors, which is a pretty good career for most people to start at age 37. You know, I still think — still he’s got to go do it. He’s played very, very well this spring. I think if he wins here, I think that it would be a very large step toward regaining the confidence that he has not won a major in, what, three and a half years?”

(Actually, Nicklaus was reminded, it has been five years since Woods won a major championship.)

It is compelling in its own mad way to watch Woods have a weekend like he had at Oak Hill, saving pars all over the place, as though, for this weekend, that is the sum of his gifts now. He saved some miraculous pars, and even picked up two crisp birdies on the 14th and 15th when he briefly regained his putting stroke. (It was a long slog of a round, largely because Brooks Koepka, his playing partner, saw more of upstate New York than General Burgoyne did.) He closed it out playing 3 under par on the back nine, his best sustained stretch of the weekend, and finished the tournament tied for 40th. At the end of it, he talked about the majors, because that’s all that’s really left for him to talk about. He won five times this year. He is the no. 1 player in the world. That is a career for most players. But most players did not build themselves the mountain to climb that he has.

“Yeah, I was close in two of them,” he said, smiling easily at the notion. “I was right there, and I certainly had a chance to win the Masters and the British this year. The other two, I just didn’t hit it good enough. That’s just the way it goes … As I said, I was there in half of them, so that’s about right. If you’re going to be in there three-quarters or half of them with a chance to win on the back nine, you just have to get it done.”

He is not the way he was when I first saw him. The galleries, still vast, do not buzz the way they once did. (There is even the occasional joker like the guy who hollered at him as he was walking toward the parking lot, “Hey, Tiger, remember to buckle up!”) They walk the burdened walk with him, whether he’s winning, the way he did at Bridgestone, or losing, the way he did at Oak Hill this weekend. He is the no. 1 player in the world, and he was done by 2:30 in the afternoon Sunday, gone from the last major he had a chance to win this year, no closer to the top of the mountain. The sweet twilight hours of the tournament would belong to someone else.