An Open Letter to Mike McQueary 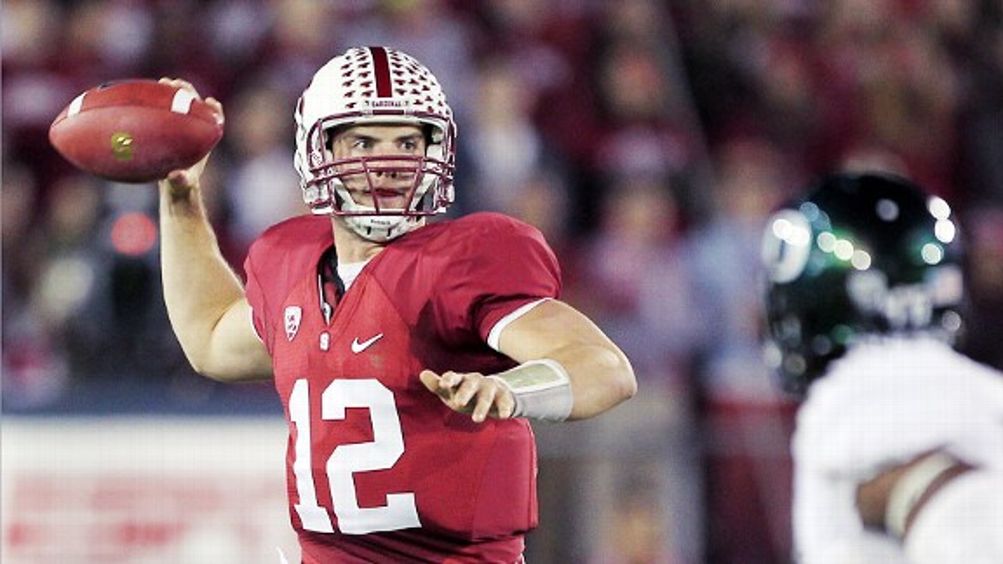 At about 8 a.m. last Saturday, a wide, grassy clearing on Stanford University’s campus called the Oval, which is normally reserved for reading and relaxation, was filled with hundreds of cheering collegians. They had gathered for ESPN’s College GameDay, and would serve as the program’s backdrop while waiting for the no. 4 Cardinal to play no. 7 Oregon later that evening. Students had been there since 6 a.m., holding signs with messages like, “The Oregon Fail: You Have Died of Dysentery Andrew Luck.” Just a few years ago, it was hard to give away Stanford game tickets. Then Andrew Luck happened.

The challenge of making football matter at Stanford, and the rarity of that morning’s scene, is multifaceted. Over the years, the school has been known for its sterling academics, its long roster of students who also happen to be Olympians, and celebrity students such as Chelsea Clinton and Tiger Woods. It has not been known for football. From 2002 to 2006, the Cardinal won a combined 16 games, and in 2006 went 1-11. The team didn’t matter on the national stage, so it didn’t matter to students, either. When former Stanford center Chase Beeler first got to Stanford in 2007, the year Jim Harbaugh became head coach, teammates used to refer to Stanford Stadium as “The Library.” “It’s quiet,” Beeler says, “you come in, get your work done, and you leave.”

Upon arriving in Palo Alto, Harbaugh orchestrated one of the quickest turnarounds in college football history. In his first season, Stanford went 4-8, including a win on the road over 41-point favorite USC. By his fourth season, the Cardinal were 12-1 and in a BCS bowl game. The leap came as Luck emerged as the nation’s best quarterback, and perhaps the best college quarterback since John Elway made his way through Palo Alto. With Harbaugh now in the NFL, Luck became the central figure in maybe the biggest day in the history of Stanford football. “It’s still Stanford,” Beeler says, “and that’s inherently different. But it does feel much more like any other college game now. And it’s pretty amazing to me that that transformation has taken place. ”

Although winning is enough to make that transformation at many schools, Stanford football had to do more to gain the attention of its student body. Most who come to Palo Alto don’t come for kegs and eggs at dawn. “[When I got here] there was just very little familiarity or awareness of football amongst anyone in the student population,” Beeler says. Even now, Luck is treated as more of a celebrity nationwide than he is in his own classes. “I’m sure it’s happened,” Luck’s advisor and head of the Stanford architecture program John Barton says. “But I can never remember him walking into class and someone starting a conversation about football. You have to remember, that’s just Stanford. They’re all here to be educated.”

The same goes for Luck, who announced he would forego this year’s NFL draft and return to Palo Alto for another season. Barton says that like most at Stanford, Luck is a student first, and an exceptional one. But there was also the opportunity to put Stanford football on a plane it had never reached before. Luck may go unbothered at the library, but his impact was evident all over campus on Saturday. The eucalyptus groves surrounding the stadium were full of children in red no. 12 jerseys playing pick-up football. Red and yellow “Luckamania” T-shirts dotted the student section.

Luck has done all he can to defer the attention back onto his teammates. “He just doesn’t get it,” Barton says. “To him, all of this, it goes to depths of insanity.” At one point last season, Luck did a TV interview for ESPN that he knew would air as the team prepared for practice. “He goes around very quietly before the interview comes on and turns off the TVs,” Beeler says. “He just doesn’t want the press. He doesn’t want guys to feel like he’s getting more attention than they are.”

At the end of every GameDay telecast, the crew brings out a well-known figure associated with the host school to pick the last handful of winners for the day. When the time came, former Stanford quarterback Jim Plunkett emerged from the orange Home Depot-sponsored bus parked on Palm Drive. More than Elway, Plunkett is the symbol of lost relevance for Stanford football. A Heisman Trophy winner in 1970, Plunkett lead the school to its first of two straight Rose Bowl wins. Back then, Stanford Stadium held more than 90,000, and sellout crowds flocked to the campus every weekend. And as Lee Corso picked the Cardinal to defeat Oregon and danced with the Stanford Tree, and the students cheered and snapped pictures with Plunkett as he left the stage, one had to wonder: Can it last?

The stadium was full well before the game began and the student section was bursting with energy as the Cardinal took the opening kickoff. The loudest cheer came as Luck was announced as the quarterback and the first drive began. Both offenses had sluggish starts. The first Stanford possession ended in only the team’s eighth three-and-out of the season, and early on it looked as if the Cardinal had enough to slow Oregon’s hyper-paced running game of LaMichael James and Darron Thomas.

Luck’s value to the Cardinal on every play was evident before the ball was even snapped. Many schools run what are deemed “pro-style” offenses and are merely simplified versions of NFL systems. Luck allows Stanford to deploy a system that mimics some of the most advanced at the professional level. When asked about just how complex an offense Luck runs, Beeler, who is on the practice squad for Harbaugh in San Francisco, laughs. “How complex of an offense he runs,” Beeler says. “Literally, that he runs out on the field, sometimes calling his own plays. It’s astounding. I had a good sense while I was at Stanford that what we were doing is more complex than most universities, and that it took a very special person in Andrew to orchestrate that. I always thought it was as complex as an NFL offense, and in reality, it’s more complex.”

Luck’s pre-play adjustments weren’t much help early on. Cardinal receivers struggled to get separation from an athletic Oregon defense, and facing a third-and-9 from his own 49-yard line early in the first quarter, Luck threw an interception to Dewitt Stuckey that set up Oregon’s first score of the game.

As the first half went on, it looked as if Oregon’s speed would be too much. The Ducks scored touchdowns of 58 and 41 yards, and the Cardinal needed a near-perfect 84-yard touchdown drive from Luck at the end of the half to keep it a one-score game after two quarters. The problems only worsened in the second half. It took four plays for the Ducks to extend their lead back to 13, and it felt as if there would be no more stopping them. James and wide receiver De’Anthony Thomas seemed to be playing at a different speed than the Cardinal defenders, and the Stanford receivers could not find space in the Oregon defense. Whether it was the early interception or the lack of open receivers, Luck seemed hesitant in the pocket. When he fumbled deep in his own territory, and Oregon extended its lead to 20, the game felt all but over. Stanford responded, as it would twice more, and when the offense took the field with five minutes remaining and trailing by 16, there was still a sense that somehow Luck would bring them back. But on the second play of the drive, a Luck pass bounced off freshman wide receiver Ty Montgomery’s hands and into the arms of Oregon linebacker Boseko Lokombo, who took it all the way to the end zone.

Finally, the stands began to clear out. A father and son moved down the tunnel behind the student section. “I really thought this was it,” the father said. And his son nodded. Even in a game in which Stanford looked badly outclassed, losing had become hard to believe.

Stanford’s postgame press conferences are held in a 200-square-foot room in the back of a small building it uses as a game-day locker room. As more than a dozen reporters and a handful of cameramen crammed in, someone joked about the tight fit. “Well,” one reporter replied, “it was built when five people covered this team.”

Luck was joined at a table by three of his teammates, and when the questions began, most were directed toward him. His responses were short, but not curt, his distaste for prying only intensified by the freshness of the Cardinal’s first loss in more than a year. Yes, they were fast. No, not any faster than we expected. How did I play? Not well enough to win.

“It’s disappointing, obviously,” Luck said. “We haven’t had that long to digest it, I guess. You always want to win every game. So, disappointment, yes. But life goes on.”

The questions ended, and Luck and his teammates moved back into the locker room before being replaced by Stanford coach David Shaw. When asked if being this close to a national championship was any consolation, Shaw reaffirmed his confidence in Stanford’s future. “Our program is close to where we want it. It’s never right where you want it. You’re always pushing to be better.” Next year, the program will bring in a top-25 recruiting class that includes players who spurned schools like Alabama and Georgia in favor of Palo Alto.

The Cardinal shuffled out of the locker room one by one, each making the walk up the path back toward campus. “There is still football to be played,” Luck had said earlier, and he’s right. He has two more games in Palo Alto, but neither will come with the anticipation that visited Stanford Stadium on Saturday night. And when the clock hits zero against Notre Dame two weeks from now, Luck will make that final walk, and Stanford football’s newfound sense of hope just might leave with him.