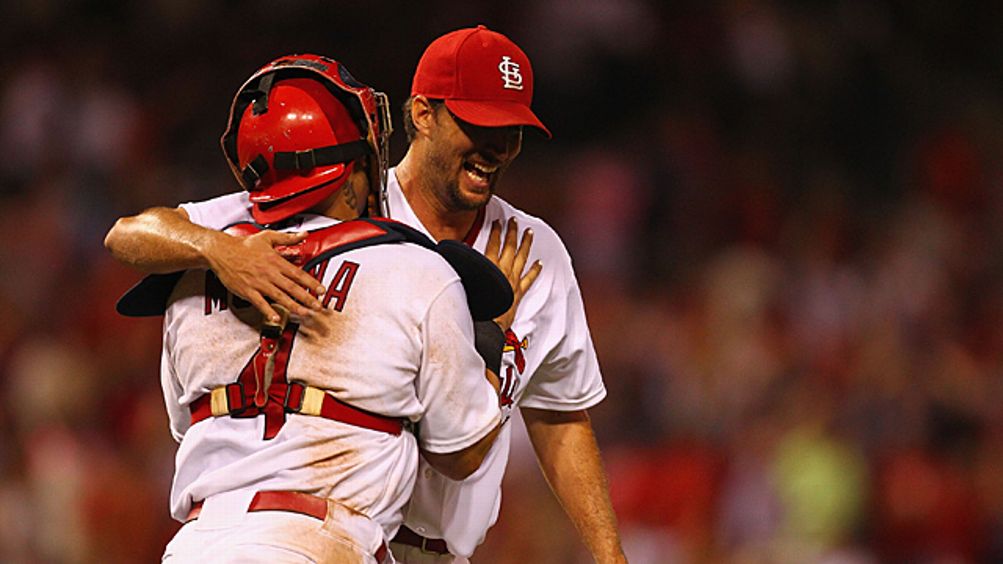 You walk up the stairs from the train toward a corona of ballpark lights forming a great arc against the night. The train is called the MetroLink, and it is not a subway, but the effect is still the same. Your work bag is over one shoulder, and you climb the stairs to the great, spreading lights, and it is a wonderful old-school sportswriting moment. Up from the train, through the crowds, up toward the lights of the ballpark, the glow enfolding the place against the night. Isn’t this the Polo Grounds? Aren’t I John Kieran?

I got to St. Louis late on Friday, just as the Cardinals were finishing up an atypical — for the Cardinals, anyway — 3-1 victory over the Atlanta Braves. It was atypical because the Cardinals were Patient Zero for what my pal Bob Ryan calls “creeping La Russaism,” a terrible affliction that comes upon baseball managers and forces them to overthink their jobs to the point where they use six pitchers to get two outs. On this Friday night, with Mike Shannon’s outdoor shebeen rocking to some of the most godawful music ever recorded, the Cardinals beat the Braves behind Adam Wainwright, and Wainwright pitched the entire game, as he has done more often than any other National League pitcher this season. He threw 128 pitches. I climbed the stairs from the train and into the spreading light and it was the eighth inning, and Adam Wainwright was sailing along, and there were cheers from behind the lights. I watched the last inning at Shannon’s restaurant. People were dancing. It was a baseball night in St. Louis, and that is one of the few things in American sports that is not overrated at all. 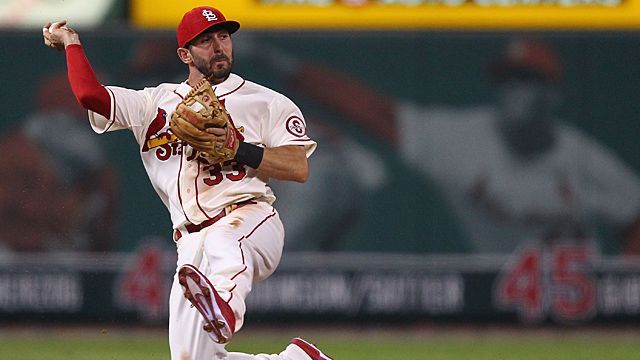 Good lord, though, they don’t make red-asses like they used to anymore.

On Sunday, the Braves managed to salvage one game out of four here, pasting the Cardinals 5-2. At one point, St. Louis starter Lance Lynn and home plate umpire Mike Muchlinski seemed to be having a kind of spirited chat. This prompted the intervention of both Cardinals catcher Yadier Molina and Cardinals manager Mike Matheny. Now, in the past, this might have occasioned a general hooley. The modern Cardinals are a competitive bunch, but relatively mild given the franchise’s history for stirring pots. After all, it was the spike-dancing of a giddy St. Louis immortal named Ducky Medwick that nearly forced the cancellation of a World Series game against Detroit in 1934. I don’t even want to think about what would have happened to Muchlinski if it had been Bob Gibson, and not Lance Lynn, on the mound for the Cardinals. I suspect there might only have been a smoking, greasy spot left behind home plate.

Afterward, though, for his part, Lynn was fairly mild about the whole business. He was upset at the umpire, true, but he was also hollering his support for Molina, who’d thrown out an Atlanta runner who’d been trying to steal. Maybe the umpire got confused. Yeah, that must have been it. “I guess wait until we get back to the dugout to tell Yadi good job next time,” said Lynn. Matheny was a little more animated about this interlude than his pitcher was. He has his team in a pennant race with Pittsburgh and Cincinnati with a solid and maturing starting rotation. He has to walk a very thin line between reining them in and letting them fly. “The guys who stick around,” Matheny said, “are the guys who can stay pretty level … But that makes it tough with young players. We tried it with Lance, and it didn’t work. If he’s going to hack some people off, so be it. We’re not here to make friends. We’re here to win ballgames.” There were more than a few echoes of Gibson and Medwick in what Matheny had to say.

For my money, the Cardinals were America’s Team before Jerry Jones sank his first oil well. There were only a few truly transformative programs in the days in which mass media consisted of the radio. These were shows that united distant people, that were so powerful and so pervasive that they changed the nature of the cultures and the countries at which they were aimed. They included “Hockey Night in Canada,” “The Grand Ole Opry,” the shows hosted by a crew of radically subversive DJs at WLAC in Nashville, and St. Louis Cardinals baseball broadcasts, carried by KMOX. Because of the strength of KMOX’s signal, and because of the innate historical charisma of the franchise, in the years before the major leagues discovered California the Cardinals made fans out of practically everybody who lived south of Champaign, Illinois. Larry Bird grew up in French Lick, Indiana. He grew up a Cardinals fan.

Now they are in an extraordinary three-way race in their division — Atlanta, even with the recent beaning of Jason Heyward, has the National League East pretty much in the satchel — and they are coming into a stretch of scheduling that is positively surreal. Starting tonight at home, the Cardinals will play 13 games, over the next two weeks, against either Pittsburgh or Cincinnati, the two teams with whom they are contesting the NL Central Division. (The last time this happened, at the end of July, the Cardinals lost seven in a row, to Atlanta and Pittsburgh, before beating the Pirates at the end of a five-game set, 13-0, to begin a four-game stretch in which St. Louis scored 44 runs.) “We’re going to continue our very boring approach,” said Matheny. “That’s to leave nothing on the table every night.”

“That was probably about as good as we’ve seen him in a long time,” Matheny said. “It was a different style a little bit. His stuff was electric, but he was in the lower part of the zone more tonight than we’ve seen it in a long time … That was the best cutter by far that he’s had all year. And that’s a pitch he didn’t start the season with, so it’s nice to see him being able to add to what he has. That’s going to be a real big pitch for him. He had a lot of swings and misses.”

“The cutter,” Miller said, “is starting to take over the game.”

Miller got rocked for a home run in the first by Freddie Freeman, and then Matt Carpenter tied it in the St. Louis half of the inning. Carlos Beltran homered again for St. Louis in the third, and Miller managed to hold the 2-1 lead until creeping La Russaism reasserted itself briefly. It took four Cardinals pitchers to complete the last two innings. 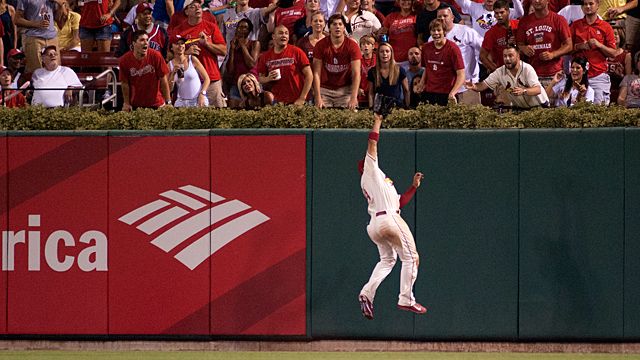 Even on Sunday, Wainwright was still floating, just a bit, at what he’d accomplished on Friday night, though he took pains to already have moved along from the 128 pitches he threw to win the game. They still make clichés like they used to, that’s for certain. Everybody still plays it one at a time, even in the shadows of the past that surround baseball in St. Louis the way the spreading lights still surround the blocks around the ballpark.

“The hardest thing sometimes is to realize when you’ve pitched a good game numberswise and you know that you did something that won’t work necessarily except that one day. Maybe you got away with a lot of different pitches because your delivery was a little off here and there, or your game plan was off. When sometimes the world says you did a good job when you know you could have been better, that’s the hardest part.”

So, in this modern ballpark in a very old place, a legitimate three-way pennant race continues tonight. And it does so among three ancient franchises, all places with new ballparks surrounded by bronze statues of old players, where the tenements used to rise where luxury hotels stand now, but where the corona of lights still softens the darkness of the early night.