Death of a Screenwriting Guru 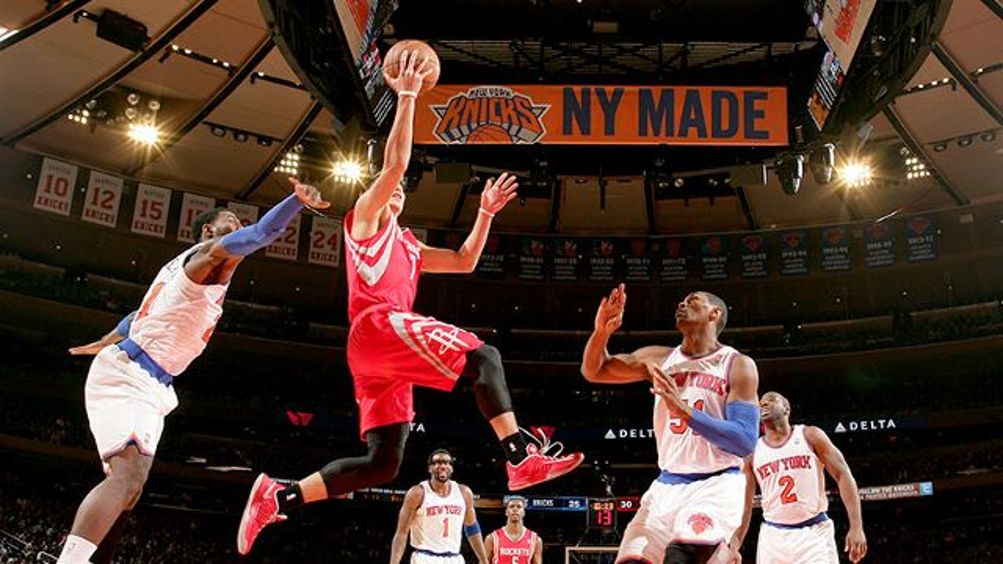 On Thursday night, Jeremy Lin stood in the visitor’s locker room of a familiar building surrounded by a throng of New York City reporters whom he must have vaguely recognized. The reporters asked Lin how it felt being back in the city and all the usual revenge-narrative questions, and Lin did what Lin always does — he was polite and noncommittal and thanked everyone and talked about how he was happy that the Rockets had beaten the Knicks. Patrick Beverley, who now starts ahead of Lin as Houston’s point guard, sat across the way, a towel draped over his lap. He seemed amused by the whole spectacle, although not in any malicious or snarky way. “I’m just glad I don’t have a locker anywhere near his,” he said. When Chandler Parsons came out of the shower, he corralled a Rockets team employee. “You gotta help me out,” Parsons said. The team employee gathered up all the bass in his voice and began edging his way through the mass of bodies and recorders and cameras to Parsons’s locker, adjacent to Lin’s.

The scene, while lively, almost felt like a chore for the gathered press. Jeremy Lin’s return to Madison Square Garden is still a story, albeit one with diminishing returns. On Thursday night, even the fans couldn’t muster up too much enthusiasm for Lin’s return. There were a few boos when he went to the foul line or checked in at the scorer’s table and certainly more Asian dudes than one would usually find at Madison Square Garden in mid-November.

Thankfully, the second return of Jeremy had come with a bonus story line — for the first time since Linsanity erupted here in February 2012, Jeremy Lin was playing well. On November 11, he scored 31 off the bench in a double-overtime win against the Raptors. Two nights later, he hit nine 3s against the Sixers and put up 34. Many, myself included, had come down to Madison Square Garden to see if they might catch the start of something big-ish. If Lin dropped 40 or 50, a fellow reporter mused, Linsanity II might be upon us.

Lin scored only 21 points, but he threw down a dunk and hit a few big shots in the second half. The Rockets beat a struggling Knicks team that has been trying to whip itself back into last year’s form. It all felt like a letdown, but only because of the preposterous expectations set by the original Jeremy Lin story.

Last year was bad, by all standards. The aggression Lin had shown with the Knicks was mostly gone. His first step looked slow and he couldn’t seem to figure out how to finish at the rim. Compounding those issues, Lin shot under 40 percent on spot-up opportunities and couldn’t figure out how to score in Houston’s transition offense. By the end of the year, Beverley had clearly become the better option and Lin was relegated to the bench. The Knicks, meanwhile, won 54 games with Raymond Felton at point guard, leading many to conclude that the team had been smart to let Lin and his poison-pill contract walk.

This year, Lin has improved across the board. And while he’ll never again be the sensation who led the Knicks to all those thrilling wins in February of 2012, he has become more or less the guy we thought he’d be when he left the Knicks — an above-average scoring point guard who can go for 30 on any given night. The offseason work he put in on his shot with the Rockets staff has paid off; Lin is shooting 51.2 percent on spot-up jumpers and 44 percent from beyond the arc. For players who have run more than 100 plays in the half court this season, Lin’s 1.06 points per possession ranks 10th in the league. Aside from his defense, which can be generally described as “not great,” Lin, at least through the first 11 games of this season, has turned himself into the player the Rockets need — an efficient secondary scorer who can shoot from distance when James Harden is on the court and who can take over the load when Harden rests.

More importantly, the enthusiasm seems to be back — despite his modesty in interviews and his Christian, clean-cut image, the best Jeremy Lin is actually an irrational-confidence guy. You want him to believe that he deserves to have the ball in his hands and that he can score on anyone. If he can merge the gunner Jeremy Lin with this new version that seems content to play off of Harden, there’s no reason to think he couldn’t earn out the remainder of his average salary, regardless of how heavy the hit might be in the last year of his poison-pill contract. Let’s not forget that Tyreke Evans, who, in actuality, is probably a somewhat comparable but much less efficient player, earns $11 million per year. The bust fears have been mostly put to rest. And although Lin will probably never make an All-Star Game without fan-vote rigging, there’s no reason to think he won’t enjoy a productive, lengthy career in the NBA.

If Lin has stabilized into something like the 15th to 20th best point guard in the league, what has happened to his status as the Great Yellow Hope? At the height of Linsanity, it would not have been too much of a stretch to say that Jeremy Lin was on the short list of most important Asian Americans in our country’s history, railroads be damned. Today, even the phrase “the importance of Jeremy Lin” feels dated and passé, like discussing Bret Easton Ellis at a literary function. He has not quite yet become “just another basketball player,” but he has certainly faded into something resembling that.

I know here’s where I’m supposed to say “hallelujah” and something like, “we have only made real progress when the Jeremy Lin story has nothing to do with the anomaly of his race.” Or whatever. If you resist the endless silly moralizing in the national conversation about sports and the hero-making and all that stupid, bankrupt talk about role models, you should probably also keep the straight line going and say that an Asian American basketball player signifies nothing more than that one very athletically gifted Asian American kid made it to the NBA. But that sort of thinking can only come out of a place of privilege. If you don’t need to scrape out role models wherever you can, if you can look at the spectrum of public figures and see plenty of people who could have been you, then you can afford to be objective and practical about the lot of them. You can quietly laud your heroes.

It’s discomforting to say, but the Asian American community still needs Jeremy Lin as a rallying point. The “Chink in the Armor” moment marked the first time in my life that we, as a unified people, voiced our outrage. Since then, Asian American outrage has become its own meme. Some video will come out from some awful band or some awful UCLA student or some awful record company invested in turning young kids into viral singing stars and the only reason this viral trash makes the rounds is because that awful entity said or sang something offensive about Asian people.

This past August, I attended a panel that featured Jeff Yang, a columnist for The Wall Street Journal. “Asian Girlz,” a wildly offensive, wildly bad song by a wildly dumb “band” called Day Above Ground, came up in the conversation. Yang acknowledged the offensiveness of the song, but wondered aloud if we had become too easy to troll. After all, “Asian Girlz” had almost no YouTube views and the song’s notoriety came almost entirely from people who shame-linked it through social media. Why, Yang asked, were we paying so much attention to these sorts of easily shareable, mostly meaningless offenses?

I tend to agree with Yang. If the lasting imprint of Linsanity is that Asian Americans can now express their outrage on the Internet, as they did with Ark Music Factory’s video for “Chinese Food,” or for “Asians in the Library: UCLA Rant,” or for the racist shit that racists say on Twitter, that means the legacy of that great month comes more from “Chink in the Armor” than from Jeremy Lin. I wonder why so much of the upswing in media attention on Asian American issues has targeted the worst parts of the Internet and not any of the more worthy issues within the community. Are we just lazy? Have we run out of things to complain about? Or is this simply the product of a larger trend in media, in which the only things we cover are exactly those things we can access through one glowing screen or another?

Jeremy Lin was and will continue to be a litmus test on how the greater country, in particular the media, talks about Asian Americans. Last week, a SportsCenter anchor named Jorge Andres said Lin was “cooking with hot peanut oil” during a highlight segment. Andres apologized later in the telecast and later clarified on Twitter that he was making a Duck Dynasty reference and not equating Jeremy Lin’s performance to the most commonly used oil in Chinese cuisine. There’s an argument to be made here that Andres’s quick apology is a sign of progress, but where does that progress lead? Andres should have been more careful with his words, sure, and this company’s history of “Chink in the Armor” should always be factored in, but I hope we have not reached a point where every stretch of great Lin basketball gets accompanied with dread over what people might stupidly and insensitively say.

If that sounds like willful ignorance, then fine. Sometimes it’s better to just roll your eyes and not pay undue regard to comments that are beneath all of us. It’s true that racism against Asians does not “count” as much as other racisms in this country. If a comedian or a talk-show host or even a tight end decides to lighten up the mood with a little off-color humor or if a Hollywood director needs a faceless, easily mocked villain, Asians often fill the role because the risk isn’t the same. Violence against Asian Americans is hardly ever covered by the news media as anything exceptional or troubling. This is the awful and maddening truth that Linsanity confirmed. But flaring up false equivalences like “if you substitute fried chicken for peanut oil, that guy gets fired” or digging for offensive content and whipping up your indignation only trivializes the truly offensive and disturbing.

“Chink in the Armor” felt like someone big and influential had taken a shit on the floor of our party. There’s no reason to let that hurt be the only thing we take away from Linsanity, especially when, in two or three or five years, he truly does become just another dude in the NBA.