Can the Indiana Pacers Really Contend for the Title? 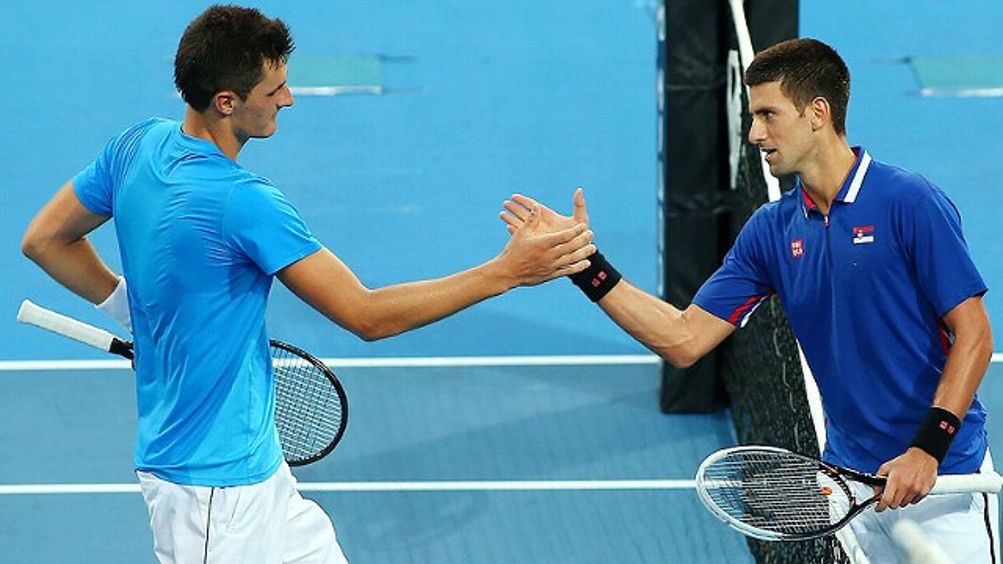 Bernard Tomic has a great slice backhand. It announces itself — racket head high, shoulders tightly turned — and succeeds by subtlety at the same time. He plays the modest shot like it would make a man famous. His follow-through, arms extended, brings him into a bow. While other players blister the ball and bully their opponents, Tomic rallies and lulls them. Then, bam, he hits a hard, flat forehand down the line. There was a time when the Australian was known for his ingenuity on the court and not for screwing up. He was a player to watch, and not only because of his run to the quarterfinals at Wimbledon in 2011, at the age of 18. He was a player to watch because watching him was a pleasure. Those hands, that touch. At the 2012 Australian Open, he beat Alexandr Dolgopolov in a remarkable battle of spins, speeds, and angles — a match that was thrilling for its strangeness. Tomic seemed poised to be the star that Oz so badly wanted him to be. Roger Federer crushed him in the fourth round, but losing to Federer at a major was still a kind of honor for a young player. That match exposed how much Tomic had to improve, but it seemed he would. “As Tomic moves up the rankings toward what seems an inevitable spot in the top 10 in the world,” wrote Craig O’Shannessy in the New York Times after the loss to Federer, “he will learn that he must move up the court to finish points.”

The first week of last year’s Australian Open had moments of restlessness, the way Januarys do. There was a sense that change was possible, and a hunger for something different, something new. Federer was 30 years old. Novak Djokovic was so 2011. Rafa Nadal was cursed with bad knees. Andy Murray was hopeless. The young kids were coming on. People were talking about the serve of the baby-faced Canadian, Milos Raonic. Kei Nishikori, barely 22 but already the most successful Japanese player in history, was blazing through his bracket. Grigor Dimitrov had a form so eerie it had earned him the nickname Baby Fed. Tomic was also reaffirming his promise. He was part of the future. He was young. Crafty. Unique. “Inevitable.”

By the end of the tournament, of course, the younger players were forgotten. Those at the top had shown they weren’t going anywhere. During those marathon matches that final weekend, they wouldn’t even get off the court. 2012 wasn’t a year of transition; it was mostly more of the same, the glorious same. Federer had occasional bad days, but he regained his crown. Nadal was injured, but he was still Nadal. No one was more consistently great than Djokovic. Andy Murray became the champion that he had always almost seemed. There were upsets along the way, but no threat was ever sustained. No one else could keep it together, set after set, round after round, tournament after tournament. Not only did Federer, Nadal, Djokovic, and Murray win all four majors — they have won 30 of the past 31 majors (the 2009 U.S. Open, won by Juan Martin del Potro, is the exception) — but they also continued their dominance of the Masters Series, winning 17 Masters tournaments in a row. (David Ferrer finally broke that streak in November.) There was something reassuring about all of this, I think. Partly because it produced so many great matches and story lines, but also because it was familiar. The only expectation more powerful than change is that things will stay the same. The younger players needed more time. There was something reassuring about that, too.

There was nothing reassuring about Tomic’s 2012, though. By the end of the year, he had become a joke: “Tomic the Tank Engine.” In retrospect it was easy to call the hype overblown, or to see warning signs: the arrogance, the helium of early success. He had a history of slacking off during matches. There were concerns about his passive style. Tomic tended to sashay, as if he were loosening his ankles instead of moving into position. He hung out inside the baseline, dangerous territory, trying to rally instead of taking his chances to close. He loved that backhand slice a little too much. Also, he acted like a brat, and then claimed immaturity as his privilege and excuse.

He had been a phenom. At the age of 15, he became the youngest winner of the Australian Open boys’ singles title. (He’d locked up representation from IMG and a contract from Nike even before that.) At 16, he won the U.S. Open boys’ title. His Wimbledon run two years later made him the youngest quarterfinalist since 1986. Maybe it’s unsurprising that he looked at his life and saw himself as exceptional and charmed. When he was 18, he moved to the tax haven Monaco. “Check it out: Ferrari, Ferrari, Maserati — this place is awesome,” Tomic said at the time.

For a while I wanted to cut him some slack, since I was drawn to his unusual game, and since I am seduced by the new and unusual. At Wimbledon, he wrecked his rackets in frustration and then talked openly about “my lack of effort, the way I have been training on court, off court, matches, and mentally.” Honesty!, I thought. Refreshing. But “lack of effort” became a kind of refrain for him. At the U.S. Open, against Andy Roddick, he barely leaned for reachable shots. In Shanghai, he admitted giving only “85 percent” in a first-round loss. Meanwhile, petty off-court troubles were turning him into a tabloid travesty. There were romantic spats, traffic violations, police disputes, and finally naked wrestling at a rooftop pool. “It was just a bit of a wrestle and a laugh around,” Tomic tried to explain to a reporter afterward. To a witness who called the police, it looked more serious. “The informant says … one is strangling another one,” said an emergency responder. “It looks like one male is going to fall off the side of the building. Looks like they are attempting to kill each other.”

The antics were tiresome. But the made-for-reality-TV act might not have mattered as much if his play hadn’t stunk. He dropped out of the top 50 by the end of the year. In December, Patrick Rafter, Australia’s Davis Cup captain, suspended him for the country’s next Davis Cup tie, citing his lack of commitment. “It’s not one specific incident, just an aggregation of his approach to the game,” Tennis Australia’s director of tennis, Craig Tiley, told Linda Pearce of the Brisbane Times. Tomic was becoming a disgrace to the tennis-proud nation. Something had to change. 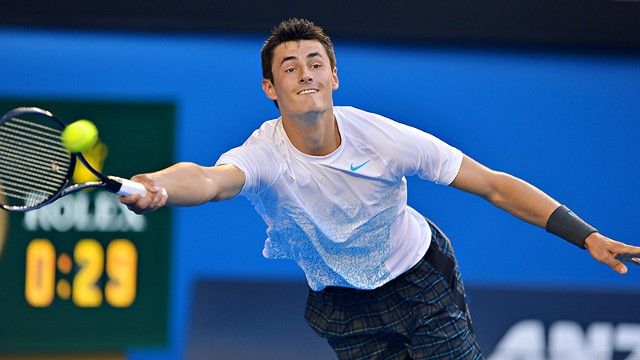 The restlessness has begun again. This year could be different. (Really, this time!) The Big Four may win all the majors again — smart money doesn’t bet against them — but their rankings will move. Nadal’s health troubles will keep him off the tour until the clay season, and David Ferrer, the first guy in line on the outside, will likely overtake him. Federer has announced that he will reduce his tournament schedule for 2013 to focus on slams and staying healthy, which may affect his spot. (Yes yes yes, he’s also turning 32.) Maybe Murray and Djokovic will have the rivalry that Federer and Nadal once did, but it’s not there yet. No one doubts Murray’s game anymore, but he still sometimes melts down (and dresses ugly). Even Djokovic started the season looking human.

It happened at the Hopman Cup. Granted, it was an exhibition. There was jet-lag. There was rust. But fact is, Tomic beat Djokovic. Tomic had twice as many winners as the no. 1 player in the world, and 13 break chances. (He converted only two, but that was all he needed.) One point in the second set stood out, for better and worse. After hitting a few looping balls, Tomic flattened out his shots. He started to move Djokovic back and forth along the baseline, pulling him wider and wider, and then hit a drop shot. Djokovic had to scramble to reach the nicked ball and could only float it back. Tomic was there to put it away, sort of. After hitting the drop shot, Tomic had casually wandered a few steps toward the service line. With a little lean and gentle touch, he blooped a backhand volley into the corner. It was a great point, and a maddening one.

Tomic hasn’t lost a match yet this year. He has been serving very well and hitting his ground strokes with more penetrating power. The shotmaking is still there, and he’s controlling points with more consistency than in the past. He won his first title, in Sydney, last weekend. “It’s about time, eh?” cracked the 20-year-old. He loves playing at home. He thrives on the adulation, the attention. Earlier today, he trounced Leonardo Mayer in straight sets, 6-3, 6-2, 6-3, in the first round. If Tomic can reach the third round in Melbourne — if he can get past the qualifier Daniel Brands — he could face Federer again.

He wants to be the prince who kills the kings. He says he feels “unstoppable.” “I’d like to reach the top 10 by the end of the year,” he told reporters. “I’m sure if I do the right things and commit like I’ve agreed to myself I’ll do quite well.” Well, as long as he’s agreed to himself. “I believe I can make the top 10. I should have achieved that this year. Now it’s up to me to change it. I will do that and really step up and be a champion.”

Federer rolled his eyes when he heard Tomic’s boast — “a big ask,” he called the top-10 prediction, and suggested that Tomic better worry about getting past the first round. Tomic’s impressive performance so far this year, after all, has only moved him back inside the top 50.

Tomic has not exactly shown significant signs of reforming off the court. The orange BMW went up for auction, but in Monaco he’s been driving a yellow Ferrari. (Vanity plates: “SINCITY.”) He’s sniped publicly with Rafter and even took a little shot at Federer. I’m sure that’s a good idea, insulting Roger Federer.

But on the court, his play has been inspired. Tomic is not going to win this tournament. I’ll be shocked if he makes the second week. But he’s right about one thing. “You don’t know what can happen,” he said. “Tennis is a funny sport, so we’ll see.”

Tennis is a funny sport, and it could get weird. There could be a crack in the wall between the Big Four and the rest. Who can break through? Probably not David Ferrer. Ferrer had the best year of his career last year, at the age of 30. Everybody likes him. Everybody respects him. Everybody agrees that he’s smart, he’s strong, he can run. But poor Ferrer! Everybody also thinks he’s reached the limit of his talents. Tomas Berdych and Jo-Wilfried Tsonga have higher ceilings but problems with their heads. Del Potro has that U.S. Open title and the scariest forehand, but he hasn’t competed consistently. Maybe Berdych will develop some mental strength to keep from breaking down. Maybe Tsonga will find some deeper drive. Right now, though, every clear contender seems to have some problem that rules him out.

Tomic should not be part of this conversation, not yet and maybe not ever. I might not even talk about him so much if he didn’t talk about himself so much. But you don’t know what can happen. Maybe Tomic will grow up. It’s hard to imagine — but the best things always are.