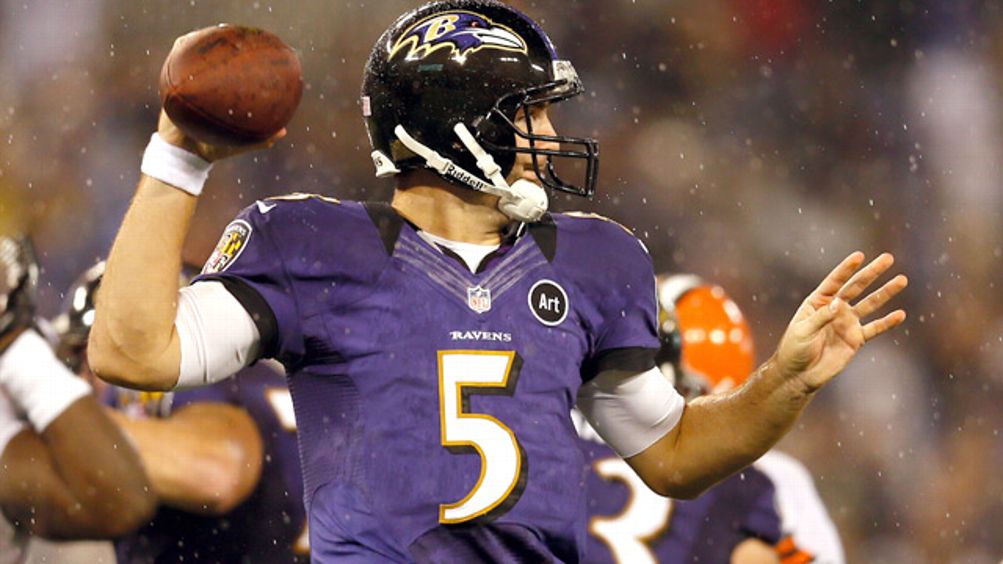 There are two guaranteed bits of patter that show up at one point or another between plays in Baltimore Ravens game. One, as I mentioned in the Trade Value Rankings last month, is that Haloti Ngata played rugby when he was younger. Did you know that Haloti Ngata is big and would be hard to take down if he still played rugby? It’s true!

The other factoid comes up when the Ravens are on offense, and it involves quarterback Joe Flacco. Inevitably, a graphic will pop up noting that Flacco has one of the best win-loss records for a quarterback at this young point in his career. That lends itself to a discussion of how Flacco’s an elite quarterback who doesn’t get the credit he deserves (if Flacco’s playing well), or how he’s a guy on the cusp of becoming elite if he could just take another step forward (if he just threw a hanger off his back foot that bounced off his receiver’s ankle).

It’s a disingenuous piece of trivia, and everybody knows it. For whatever good or bad Flacco provides, he has spent his entire career as the starting quarterback of the Baltimore Ravens, who perennially possess one of the league’s best defenses. He also has Ray Rice and a solid running game to go alongside him on offense. It’s safe to say that a win by, say, Cam Newton usually requires more work from the quarterback than one by Flacco.

That’s where I got the idea for a junk stat that might put Flacco’s gaudy record in its proper perspective. There’s a simple way to measure the benefit Flacco gets from his defense: Account for points allowed. By building a baseline for how frequently a quarterback wins with a given number of points allowed, it’s possible to get a vague estimate of how he’s performing versus expectations.1

How does that work? Well, I built models for each three-year period from 1993 through to 2011 that estimated a team’s percentage of winning, given a certain point total (with some smoothing). As an example, take Flacco’s first career win, a 17-10 victory over the Bengals in Week 1 of the 2008 season. As you might suspect, teams who only allow 10 points win that game very frequently; by my count, within that given three-year time frame and incorporating games in which teams allowed eight to 12 points, a quarterback will win that game 86.5 percent of the time. Since Flacco won, he’s credited with .135 wins2 over expectation. Had his team lost, Flacco would have produced -0.865 wins.

I went and ran this for the first four years of Flacco’s career and the vast, vast majority of starts for quarterbacks from 1993 through to the end of last season. And you know what? Joe Flacco’s win total isn’t really that impressive. Flacco’s Ravens won 44 of 64 regular-season games from 2008 to 2011. By my count, an average NFL quarterback3 with a similarly effective defense would have won 42 games with that same defensive output. Flacco’s winning ways, if you want to give him credit for them, were worth about a half-win per season.

The other quarterback who got heaps of credit for being a winner under similar circumstances was Mark Sanchez, but his situation was different. Sanchez enjoyed a similarly brilliant running game and defense under Rex Ryan in New York, but what put Sanchez over the top wasn’t his cumulative win totals; it was his playoff performances. Never mind that the 2009 Jets made it to the AFC Championship game while riding an incredible streak of five consecutive missed field goals in the playoffs, a random act that comes through town about once every 5,000 tries. Until the Jets collapsed and missed the playoffs last year, Sanchez’s reputation as a winner was golden.

The problem with that is that Sanchez really hasn’t won very much more than you might expect. From 2009 to 2011, Sanchez’s Jets went 27-20 during his regular-season starts. Over that time frame, an average quarterback with the same points-allowed profile would have won … 26.3 games. Given a dominant defense, Sanchez has held serve during the regular season before raising his game and playing more efficiently during the postseason.

Who actually has contributed far more wins than his defense’s performance would have indicated over the past 20 years? You’re never going to guess who comes up. In first place by a wide margin are Tom Brady and Peyton Manning! I know, stunning. Brady’s slightly ahead, as his 159 starts between 2001 and 2011 resulted in 124 wins against an expectation of just 92.8 wins. That difference of 31.2 wins translates to 3.14 additional wins per 16 games, which is the highest figure for anybody over that time frame. Peyton is right behind him at 3.03 marginal wins per 16 games.

After Brady and Manning are the likes of Steve Young and John Elway, but just behind them is a surprising candidate: Matt Ryan. Like Flacco, Ryan had a reputation as the guy who handed the ball off to a successful running game during his rookie season, but he appears to have grown into a more complete quarterback than Flacco by now, playoff performance (and win totals) aside. Ryan’s won a bunch more games than you might think. In 61 starts (excluding a three-pass outing against the Bucs), Ryan has won 42 games. An average passer with Ryan’s same points allowed would have won just 33.3 games, giving Ryan a difference of 8.7 wins, or 2.3 wins above expectation per 16 games.

On the flip side, David Carr was dismal. Carr won just 23 of his 79 starts, virtually all of which came as a member of the Texans. Carr didn’t have great defenses in Houston, but they were better than his performance, as their figures suggest that Carr “should” have won about 34 games, an 11-game swing. Among active quarterbacks, the worst candidate has been Bills quarterback Ryan Fitzpatrick, who won 18.54 games against an expectation of just under 23 wins.

Of course, there are plenty of limitations to this simple metric. It doesn’t incorporate game style or factor pick-sixes/other touchdowns not allowed by the defense into the discussion. Perhaps there is something about Flacco’s performance that is grossly underestimated in his statistical line and the defense’s points allowed that makes him so valuable. In reality, though, people want to use Flacco’s win-loss total as a measure of his level of performance, and when they do so, just about all they’re reporting on is how well Baltimore’s defense has played.