Maradona, Then and Now

The Secrets of Match Play 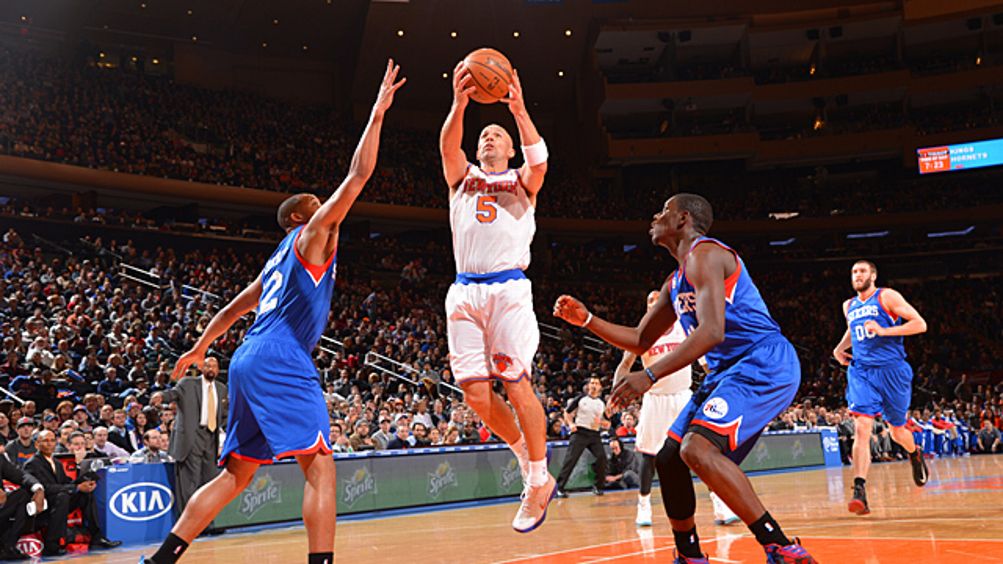 By this time in the NBA season, every team, good and bad, needs a healthy dose of ridiculous in its game to keep the fans interested and the snark flowing until such time as the playoffs begin and everybody has to get grimly serious about the whole business. (Back in the day, there was never a better time to cover the Larry Bird–era Celtics than during the trackless days of mid-February and early March. Those teams had Bird and McHale — and, earlier, Cedric Maxwell — as snarkmasters supreme and, eventually, they had Bill Walton come aboard as a dartboard. It was open-mic night four times a week.) Right now, and much to his dismay, New York Knick Jason Kidd is the element of ridiculousness that’s adding a certain je ne sais clang to what is, at the moment, the best team not only in your Atlantic Division, but also in your five boroughs.

Kidd is in a slump. No, check that. Kidd is in a morass. No, check that. Kidd is in the Great Grimpen Mire and we may never see him again. Jason Kidd, who already has a plaque gathering dust as it waits for him in Springfield, has missed 34 of 41 3-point attempts, including six Sunday night, in a closer-than-it-should-have-been, sparing–you–from–watching–Seth MacFarlane 99-93 win over the Philadelphia 76ers. He has missed them long and he has missed them short. He has barely missed them and he has missed them by a time zone or two. Anne Hathaway had as good a chance of hitting a 3-point shot Sunday night as Jason Kidd did. But what’s interesting is that this amazing pile of statistical roadkill likely will not even matter in two months. The Knicks didn’t sign Kidd to hit 3-pointers in February. They signed him to hit Carmelo Anthony in the eyeball with a pass at a critical moment of a game in June. And, if he is a step slow at that, too, and he is, he is still being paid a handsome $9 million or so for three or four passes that people will remember long after the sound of The Bells of St. Mary’s fades.

The Knicks came into Sunday night’s game deep in the dog days. They’d lost four in a row. They’d given up a spectacular 74 points in the first half of Wednesday’s game against the Indiana Pacers. And breathing down their elderly necks was the young and enthusiastic crew in the Barclays Center at the other end of the subway line. “When you get behind,” New York coach Mike Woodson said before Sunday night’s game, “you’ve got to be able to find that energy to get back in the game, and we haven’t been able to do that. There are all kinds of runs in every game and you have to be ready for them. We’ve got to get back to where we’re the aggressor, and we get out fast, and the other teams have to try and catch us.”

They’re a strange, motley bunch at first glance. There are seven players on the roster with more than 10 years in the league, and three with more than 15, including Kidd, who’s closing in on his second decade. There are players born under the administrations of Gerald Ford and Jimmy Carter. (For his part, Kidd was a Nixon baby, born a few days after one of the Watergate burglars wrote a letter to the judge in which he talked about hush money.) Their leading scorer is Carmelo Anthony, who is dead in the middle of his prime; with LeBron James and Dwyane Wade, he’s part of the great triumvirate that came into the league at the same time. He can be an unstoppable scorer — 29 points Sunday night, including 16 of 18 from the line. The Knicks kept isolating him at the top of the key against Thaddeus Young, and this was the equivalent of ringing the dinner bell. He also is a maddeningly apathetic defender, and there is a radius of unlikability around him on the court that’s hard to dismiss. There’s the smirk. There’s the passivity when his team doesn’t have the ball. And there are those moments when Melo tends to harsh the general mellow in unnecessary ways. Tangled up with Philadelphia center Spencer Hawes in the third quarter Sunday night, with his team up by a solid 14 points, Anthony swatted Hawes in the back of the head. Hawes went at him, and then New York’s Tyson Chandler went at Hawes, and a lot of woofing and flexing ensued to no great purpose. There was no point in caring about Anthony for the rest of the night.

(Again, I am not against woofing and flexing per se, but there’s a time and a place for it, and it should have a point. This was flexing and woofing because Spencer Hawes didn’t let go of Carmelo Anthony’s elbow soon enough. As a casus belli, that’s pretty lame.)

However, central to this Knicks win was the play of Amar’e Stoudemire — he of the many injuries and the wandering apostrophe. In 22 minutes he had 22 points, and it was his play, inside and outside, that gave the Knicks the lead they would not relinquish. His first two baskets were putbacks, and it became plain quickly that the Sixers couldn’t find an answer for him; Hawes certainly wasn’t it.. Stoudemire’s only been back from a knee injury since New Year’s Day, and his minutes are being limited, and he’s the star of the New York second unit, and that seems fine for him at the moment.

“He gave us a huge spark tonight,” Chandler said of Stoudemire’s play. “He brought a lot of energy tonight.”

“It’s all about taking what the defense gives you,” Stoudemire said. “It’s a matter of being aggressive, and of being patient, too.”

He has lived a life that is baroque even by the standards of NBA biographies, which always were considerably high and have risen even higher now that the league recruits the entire world. Stoudemire has led an interesting life, which may or may not have been a blessing. 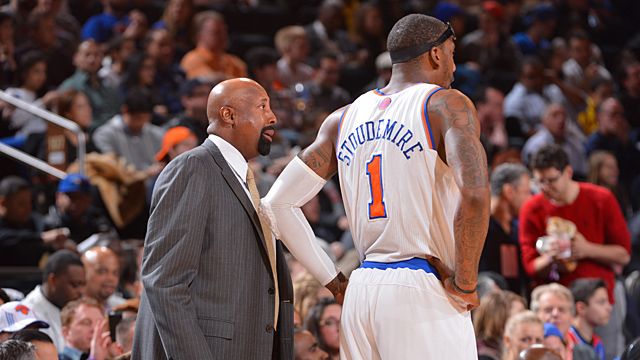 He was born in Florida. His father died when he was young and his mother was in and out of jail for most of his time in high school, a period of his life that is even more interesting when you consider that he attended six of them. He grew to be 6-foot-11 and 245 pounds, and he had all kinds of talent. He was supposed to go to Memphis and play with John Calipari, but he bailed on that for a number of reasons, most prominent among them being that he’d become a target for the pecksniffs at the NCAA. Stoudemire threw himself into the 2002 NBA draft. Phoenix made him the only high schooler picked that year — at which point his body began to break down. He’s had microfracture surgery. He stayed in Phoenix until 2010, through surgeries, a detached retina, and that completely weird episode in the 2007 playoffs when he got suspended for leaving the bench in a series that the Suns lost to San Antonio.

He signed with the Knicks to deafening fanfare, and he scored 30 points in nine straight games during his first season with the team. Midway through the season, the Knicks completed the deal that brought Anthony to New York from Denver, and things were going splendidly until Stoudemire hurt his back trying a stunt dunk in Boston. He gained weight during the lockout the following year and, at the end of the 2011-12 season, his back went out on him again. (Stoudemire’s recovery hit something of a snag in the playoffs when he lost a fight with a fire extinguisher box during the series in Miami.) He also became a more fascinating person. In 2010, during a visit to Israel, Stoudemire tweeted that he was researching his Jewish roots, which he claimed were on his mother’s side of the family. His genealogical researches failed to bear this out, but it showed an active and interesting mind, in any case. To watch him on the floor now is to see just enough of the skills that make you wonder what he might have been, had injuries and fire extinguisher boxes not gotten in the way, and also just enough of them to make you admire the willpower it takes to summon up what’s left of them.

“I think the limited minutes of 30 is great for me so far,” he said. “It’s really keeping me fresh, and I feel great.”

A lot of NBA players are pursued by the doppelgänger of who they once were, or, worse, who they might have become. (In Jason Kidd’s mind, and in his memory, I guarantee those 3-point shots go in.) The question becomes how you live with that doppelgänger going forward. A lot of players never figure that out. Stoudemire seems to be learning how. After all he’s been through, what you see on the floor now is always shadowed by what could have been, and what remains in memory.