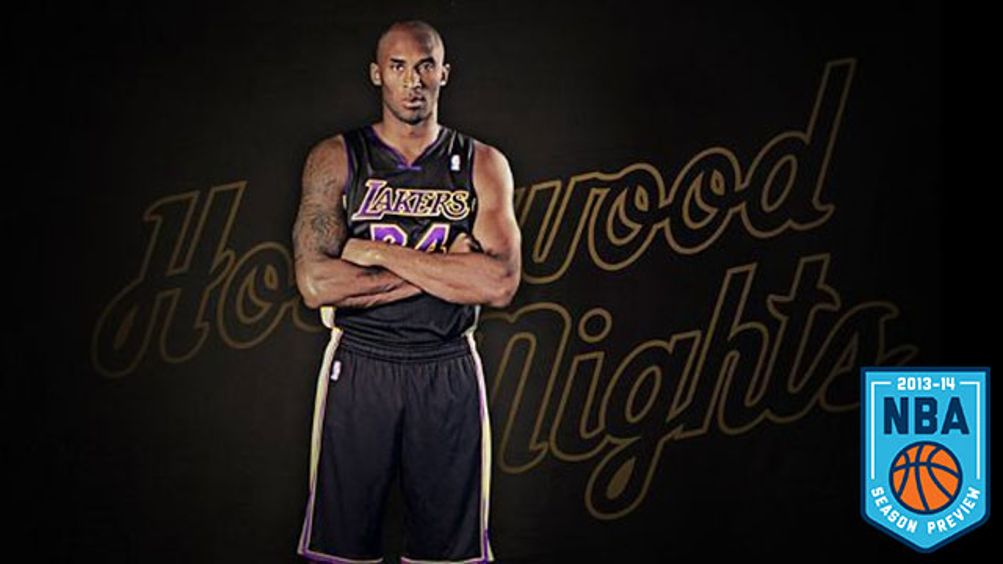 The NBA’s season doesn’t start until tomorrow, but some teams are already winning. Take the Golden State Warriors. Those short-sleeved jerseys are back. I know what you’re thinking: ugh. It’s true that they weren’t so hot when they debuted back in February. They were yellow. They were baggy. They landed a basketball team where no basketball team should go — somewhere between “golf caddie” and “Tour de France.” People carped about the sleeves. I carped about the sleeves. The problem, however, wasn’t really the sleeves. The problem was everything else.

The sleeves were actually pretty innovative. You could see what the league’s clothier, Adidas, had in mind. The shirts appeared to weigh less than the tank tops. They brought the sport in line with rugby and soccer. But in practice, you had five sloppy-looking gentlemen representing a happy, snappy city. As for the color, not even California is big enough for that much monochrome. I’ve seen Warriors yellow right next to that other yellow, and I’m sad to report that it just looks off-Lakers.

Nonetheless, the Healthcare.gov folks should take heart. The league has had half a year to fix a troubled rollout, and, for the most part, it has. Golden State’s short sleeves are now a lot less golden. Except for a flank panel of road stripes and a yellow strip along the rear collar, the revised edition is all white. It’s a smart swap that doesn’t represent a change in principle. It’s a company saying, “We’re trying to get this right.” The engineered mesh that has become standard across the league gives each shirt a deceptively complicated blend of design and science — someone’s really been thinking about what it means to sweat.

The new jersey also seems more likely to flatter more body types. David Lee and Harrison Barnes now stand a chance of looking equally good. Gone, too, are the hideous pinstriped shorts, which looked like a block of Cheddar had a baby with Yankees pants. The new pair is white with a lick of blue on the outside and features more yellow to lend the whole package continuity. Now during the six games for which the Warriors are currently scheduled for short sleeves, they’ll at least be wearing a uniform. 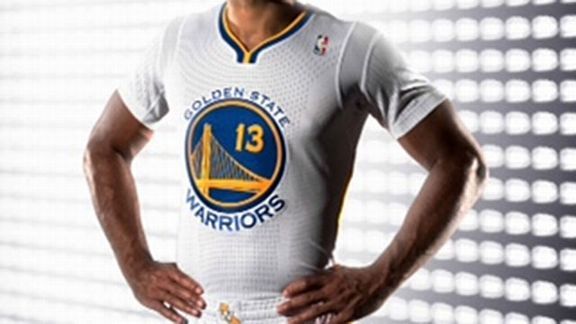 The other day, I spent part of an afternoon looking at a tableful of what’s new in the league this year. The Warriors’ short-sleeved jerseys made a huge impression because they were the most wearable of what the NBA had that day. If there had been anything remotely in my size (they topped out at double extra large), I would have tried one on. They looked chic and incredibly comfortable. This is the kind of shirt a man would want to wear for an athletic occasion.

Surveying the eight other jerseys, I hoped to see a statement piece or two, a garment that wasn’t afraid to dial it up a notch. The Heat have something called a “Red Zone Pride” jersey. It’s maroon and sleeveless, with the “Heat” name stitched in chalk-outline white (a little flame still shoots out of the t). Chris Bosh will look great in it on the nine evenings the jersey is scheduled to be worn. It even looks expensive — an authentic one will retail for $300. But this shirt doesn’t advance the Heat narrative. It simply holds it in place. My guides for the afternoon were Christopher Arena, the NBA’s VP of identity, outfitting, and equipment, and Sheena Morales, one of the league’s marketing specialists, and Arena told me the jersey’s statement was to evoke classic, Pat Riley–era Miami. It doesn’t not do that. It just doesn’t do anything else. 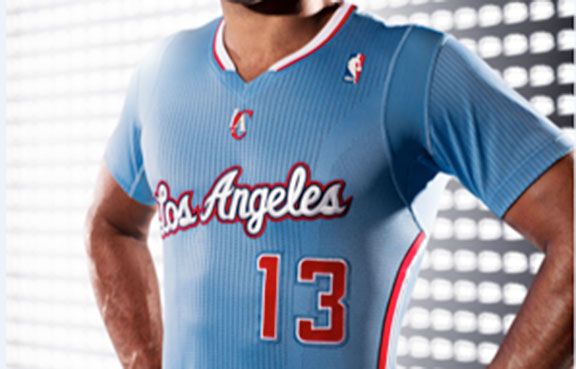 The Clippers, however, have a great, blue, short-sleeved number that makes the most of a good situation. For nine games, the team will be playing in its so-called “Nautical Pride” uniform. Hopefully they’ll be thrilled to do so. The confectioner’s blue of the fabric and red contrast stitching on the white Clippers logo will put you off of happiness pills. Let your eyes pop one of these instead. It’s not for everybody the way Golden State’s jersey is. But if worn unbegrudgingly, it could be special.

That jersey wins the battle of Los Angeles, because the Lakers have unveiled a sleeveless something called “Hollywood Nights.” It is black and silky, with the Lakers’ purple and gold flashing like a neon sign. It’s scheduled to make six appearances. It will look great on television, but there’s cause for concern. The team issued a photo of the jersey on Kobe Bryant. Practically reeking of 35 points per game, he looks unimpeachably like himself. He also looks like he’s wearing lingerie.

I didn’t get to see Detroit’s Motor City uniforms in person. But I’ve seen Greg Monroe starring in the announcement photos, and I’m nervous that he’ll see images of himself wearing his excellent collector’s item (sleeveless, ink blue, with “Motor City” in white block letters with orange trim) and think it’s too tight. He’ll be wrong. For any number of reasons, a lot of players take a size up from what they’d normally wear. I’m opposed. These pride uniforms are meant to be celebrations of the cities the teams represent. Shouldn’t that pride extend to the players’ bodies? 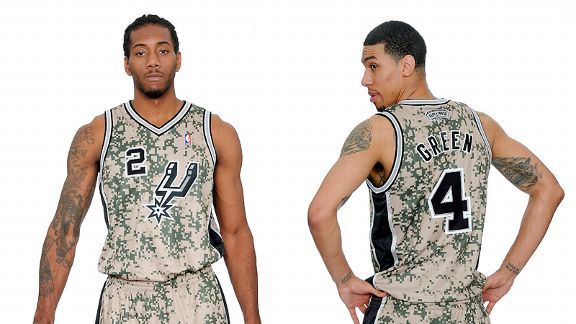 This jersey illustrated the fine line between throwback and throw-out. All the detailing looks glued-on. And the camouflage print looks less than professional. This just isn’t something one does to a Parisian. There’s some consolation to be found in the news that the team has committed to wearing the jersey and matching shorts for all of two games — against the Wizards and Bobcats, no less. Arena assured me that Adidas was devising a solution to the horror on display. There’s no reason to think it won’t arrive at one. In the meantime, wearing this jersey is the least the Spurs can do for men and women who do a lot for us — even if, uniform-wise, you wish the team were able to do a little more. 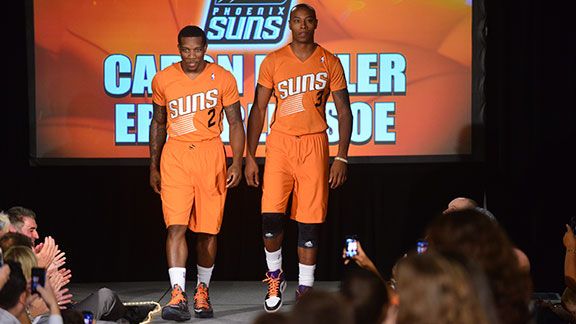 Wearability is important, but it’s not everything. I stand by what I said before about the popularity of the Golden State uniforms. They’ll be a hit. Arena likens the complaints about the sleeves to Apple iOS shock. “You get to it, and then you’re happy,” he said. He then noted that the other night Chris Paul had one of his best games ever in a sleeved jersey. It was the preseason. But you get Arena’s point: Get over it, people. And to that end, I’d like to bring your attention to the strongest piece of the season: the sleeved jersey to be worn by the Suns.

For years Phoenix’s uniforms have tried all kinds of burning, shooting basketballs. The Suns’ design has been limping along much the way the team has limped of late — there have been virtually no design changes in 13 years. But the sleeved Suns jersey does away with the basketball. There is simply the impression of a speeding orb. The jersey also comes colored in a perfect, regionally apt adobe.

The Suns’ jerseys themselves are beautiful. Mesh perforation pocks the fabric lengthwise. The word “Suns” comes in embossed white ribbing. The numbers have a black mesh that’s fun to touch. You can see and feel love for a team that, of late, has received almost none. Bantering with Bill Simmons earlier this month about the Suns’ dim prospects for the coming season, Jalen Rose characterized the situation this way: “You’d much rather be playing in Laker purple-and-gold than playing in Phoenix.” Uniform-wise, not this year.

Seeing the jerseys in person makes it clear: If these pieces are going to work on players, players are going to have to work on them. They’re going to have to trust the Adidas promise of natural movement and wear the pieces true to size or tell the company it needs to add even more give to the jerseys. For what it’s worth, this weekend, a few minutes before I picked up some pants from my tailor, Kris Humphries had been there. He wasn’t adjusting his suits. He was altering his sweatpants.