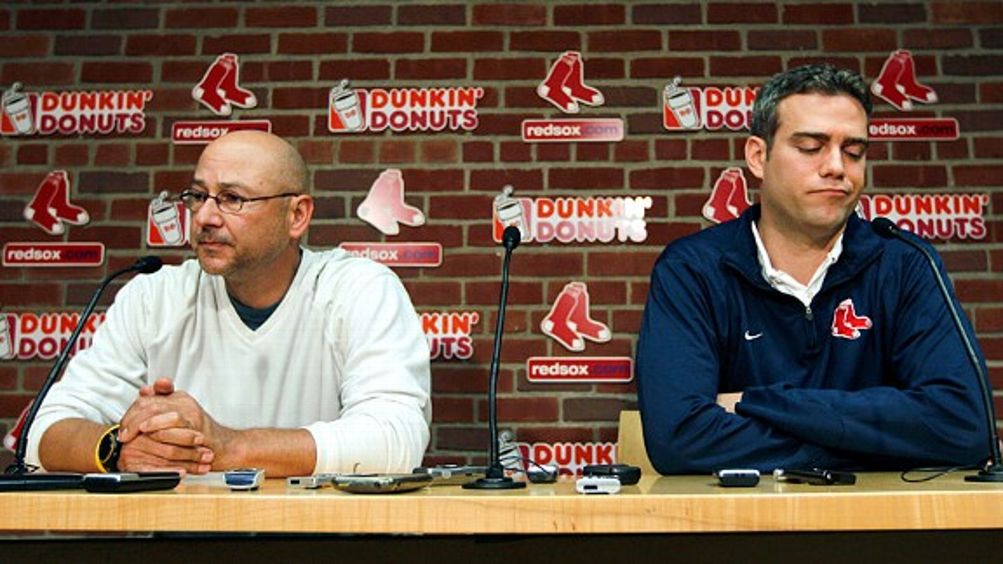 If the Red Sox had won two more games last year — one in early April, say, and one in September — would any of this be happening? What if they’d gotten hot (or, really, just lukewarm) and won the ALDS? The ALCS even? What if — and this was absolutely possible — they’d won the World Series?

We know the answer, actually. Bob Hohler’s Boston Globe article probably isn’t written, or if it is, it’s one-fifth as long and entirely ignored, because: Who cares? Reports of fried chicken and beer in the clubhouse are seen as evidence of Texas Forever-flavored camaraderie. Carl Crawford and John Lackey get a pass because they hung in there under tough circumstances. Francona might still leave, and Theo might still leave, but the headline is “Nothing Left to Prove, New Challenges Await” instead of “Oh Holy God Make the Pain Stop.” If the Sox even just barely make the playoffs, this script unfolds very differently; two games — one in April and one in September, maybe — form the thin line between “we’ll get ’em next year” and an entire institution collapsing in on itself like a dying star.

The details are ultimately unimportant. I personally don’t care whether the troublemaker was John Lackey or Josh Beckett or Nomar or Wil Cordero. Players can be traded. Contracts can be eaten. Leaders can emerge. Bad luck can turn to good luck. What worries me, and what should be worrying all Red Sox fans, is the return of the narrative that colored every moment of the franchise for 86 years. Specifically, to boil it down:

This narrative was never supposed to arise again in Boston after 2002. This is the old narrative — the one in which the team with (1) a license to print money, and (2) the most loyal fans in the world routinely screws those fans over with mismanagement, terrible decision-making, and dysfunction at every level. The one in which the team squabbles and fights and collapses under pressure and just can’t get its shit together no matter what. This narrative, need I remind you, included a clause that the team might be cursed — like, by a mean ghost — and it was such a powerful narrative that some people believed it.

Obviously, the great irony at work is that this was all supposed to have been put to bed forever by the arrival of the very same guys who are now leaving. Because those guys were smart and good at their jobs and they won. The new narrative they brought with them was: “We have tons of money and we’re not racist idiots, so we can win baseball games.” In 2005, the last time Everything Was Falling Apart, Epstein somehow held it together, with nothing more than a gorilla suit and several rational conversations with the owners. This was the best evidence yet — yes, even better than actually winning the World Series a year earlier — that the old ways were banished forever.

But those smart and talented guys are gone now, and, worse, the old narrative is sneaky-peteing back into our lives and indeed has now expanded to include those smart and talented guys, even implicating them as part of the problem. That’s right, people — this old, crappy, ugly, horrible narrative is now threatening to retroactively ruin the legacies of the best manager and the best GM this team has ever had.

This is why the details are unimportant. The fact that Josh Beckett ate hot wings and played Call of Duty 4 in the clubhouse couldn’t matter less to me, especially when juxtaposed with the fact that someone high up in the Red Sox organization told a reporter that maybe Terry Francona had a fucking drug problem.1 That’s some old-school Boston Narrative bullshit. An anonymous team source just going to town on the ideas of loyalty, decency, and propriety, and (perhaps more immediately harmful) the idea of organizational cohesion.2 This old narrative is stubborn, tenacious, and destructive. It ruins careers, forces bad trades, and drives free agents to other cities. This narrative has already, I would guess, driven David Ortiz away. It’s made Jacoby Ellsbury dream about his press conference in San Francisco in 2013. It’s causing people on Red Sox message boards to demand the trade of Jon Lester — the best pitcher on the team, who has a shockingly reasonable contract through 2014. It ruins everything it touches.

Boston, as cliché mongers are fond of pointing out, is a fishbowl. The narrative is like a hot pot underneath the fishbowl that cooks the fish alive.

In media offices all over the Boston metro area, long-dormant knives are being sharpened. Ancient attack angles are being mapped out. There’s a frisson of negatively charged energy that hasn’t been felt since 2002, when a smart, talented, and competent group of people took over the team (again, it’s worth noting, marking the very first moment in the franchise’s entire history that its team was, in any way, competent). Blame the players, if you’d like, but players come and go. The last time this narrative ran the joint, it took an executive as talented as Theo Epstein and a manager as patient and stalwart as Terry Francona to turn things around. And guys like that don’t grow on trees.

Michael Schur is the co-creator of Parks and Recreation and co-founder of the blog Fire Joe Morgan. He is a co-author of Pawnee: The Greatest Town in America. Go order it now. It is funny.