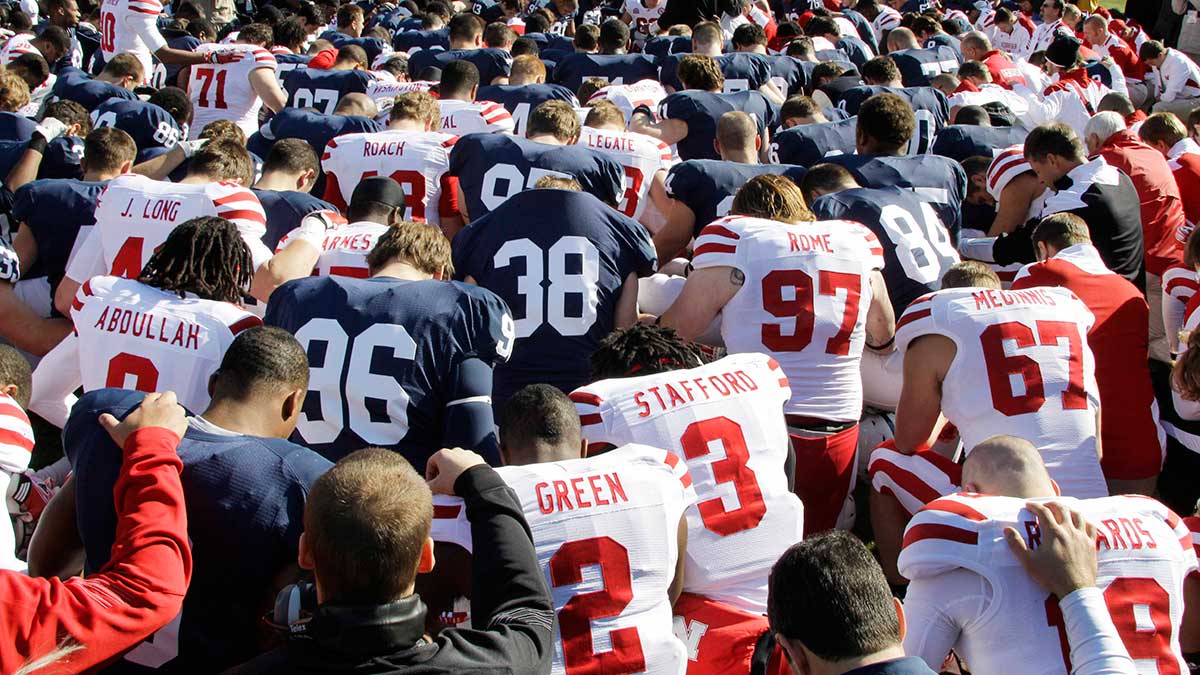 “But you, when you pray, go into your inner chamber and, locking the door, pray there in hiding to your Father …”

It was midway through the pregame prayer session that the gorge hit high tide. There is always something a little nauseating in large spectacles of conspicuous public piety, but watching everyone on the field take a knee before the Penn State-Nebraska game, and listening to the commentary about how devoutly everybody was praying for the victims at Penn State, was enough to get me reaching for a bucket and a Bible all at once. It was as though the players and coaches had devised some sort of new training regimen to get past the awful reality of what had happened. Prayer as a new form of two-a-days. Jesus is my strength coach. Contrition in the context of a football game seemed almost obscene in its obvious vanity.

So, when the feeling had subsided somewhat, I dropped by the sixth chapter of Matthew, and then I went on to the Teacher in Ecclesiastes, who warned his people:

For God will bring every deed into judgment, including every hidden thing, whether it is good or evil.

And I felt better, but not much. There is solace in Scripture, but there are also too many places where the guilty and the morally obtuse can hide.

(Those people who will pass this off as an overreaction would do well to remember that the Roman Catholic Church is reckoned to be a far more durable institution than even Penn State University is, and the Church has spent the past decade or so selling off its various franchise properties all over the world to pay off the tsunami of civil judgments resulting from the raping of children, a cascade that shows no signs of abating anytime soon.)

There will now be a decade or more of criminal trials, and perhaps a quarter-century or more of civil actions, as a result of what went on at Penn State. These things cannot be prayed away. Let us hear nothing about “closure” or about “moving on.” And God help us, let us not hear a single mumbling word about how football can help the university “heal.” (Lord, let the Alamo Bowl be an instrument of your peace.) This wound should be left open and gaping and raw until the very last of the children that Jerry Sandusky is accused of raping somehow gets whatever modicum of peace and retribution can possibly be granted to him. This wound should be left open and gaping and raw in the bright sunlight where everybody can see it, for years and years and years, until the raped children themselves decide that justice has been done. When they’re done healing — if they’re ever done healing — then they and their families can give Penn State permission to start.

If that blights Joe Paterno’s declining years, that’s too bad. If that takes a chunk out of the endowment, hold a damn bake sale. If that means that Penn State spends some time being known as the university where a child got raped, that’s what happens when you’re a university where a child got raped. Any sympathy for this institution went down the drain in the shower room in the Lasch Building. There’s nothing that can happen to the university, or to the people sunk up to their eyeballs in this incredible moral quagmire, that’s worse than what happened to the children who got raped at Penn State. Good Lord, people, get up off your knees and get over yourselves.

There is something to be said, however, for looking at how it happened. Which is not the same thing as trying to figure out how it “could” have happened. The wonder is that it doesn’t happen more often.

(How many football coaches out there work with “at-risk” kids? How many shoes are there still to drop? Unfair? Ask one Bernard Law, once cardinal archbishop of Boston, if you can pry him out of his current position at the Basilica of Our Lady of the Clean Getaway in Rome.)

It happens because institutions lie. And today, our major institutions lie because of a culture in which loyalty to “the company,” and protection of “the brand” — that noxious business-school shibboleth that turns employees into brainlocked elements of sales and marketing campaigns — trumps conventional morality, traditional ethics, civil liberties, and even adherence to the rule of law. It is better to protect “the brand” than it is to protect free speech, the right to privacy, or even to protect children.

If Mike McQueary had seen a child being raped in a boardroom or a storeroom, he wouldn’t have been any more likely to have stopped it, or to have called the cops, than he was as a graduate assistant football coach at Penn State. With unemployment edging toward double digits, and only about 10 percent of the workforce unionized, every American who works for a major company knows the penalty for exercising his personal freedom, or his personal morality, at the expense of “the company.” Independent thought is discouraged. Independent action is usually crushed. Nobody wants to damage the brand. Your supervisor might find out, and his primary loyalty is to the company. Which is why he got promoted to be your supervisor in the first place.

It is not a failure of our institutions so much as it is a window into what they have become — soulless, profit-driven monsters, Darwinian predators with precious little humanity left in them. Penn State is only the most recent example. Too much of this country is too big to fail.

Further, the institutions of college athletics exist primarily as unreality fueled by deceit. The unreality is that universities should be in the business of providing large spectacles of mass entertainment. The fundamental absurdity of that notion requires the promulgation of the various deceits necessary to carry it out. The “student-athlete,” just to name one. “Amateurism,” just to name another. Of course, people involved in Penn State football allegedly deceived people when it became plain that children had been raped within the program’s facilities by one of the program’s employees. It was simply one more lie to maintain the preposterously lucrative unreality of college athletics. And to think, the players at Ohio State became pariahs because of tattoos and memorabilia sales.

On July 20, Enda Kenny, Taoiseach of the Republic of Ireland, rose before the Dail Eireann and excoriated the Vatican and the institutional Roman Catholic Church for the horrors inflicted on generations of Irish children, horrors that they both committed and condoned. This was an act of considerable political courage for Kenny. The influence of the Church had been a deadweight on Irish politics and the secular government since the country first gained its freedom in the 1920s.

“Thankfully … this is not Rome. Nor is it industrial school or Magdalene Ireland, where the swish of a soutane smothered conscience and humanity and the swing of a thurible ruled the Irish-Catholic world. This is the Republic of Ireland, 2011. A Republic of laws … of rights and responsibilities … of proper civic order … where the delinquency and arrogance of a particular kind of ‘morality’ will no longer be tolerated or ignored … as taoiseach, I am making it absolutely clear that, when it comes to the protection of the children of this state, the standards of conduct which the Church deems appropriate to itself cannot, and will not, be applied to the workings of democracy and civil society in this Republic.”

He did not drop to his knees. He did not ask for a moment of silence. He did not seek “closure” but, rather, he demanded the hard and bitter truth of it, and he demanded it from men steeped in deceit from their purple carpet slippers to their red beanies. Enda Kenny did not look to bind up wounds before they could be cleansed. And that is the only way to talk about what happens after the raping of children.