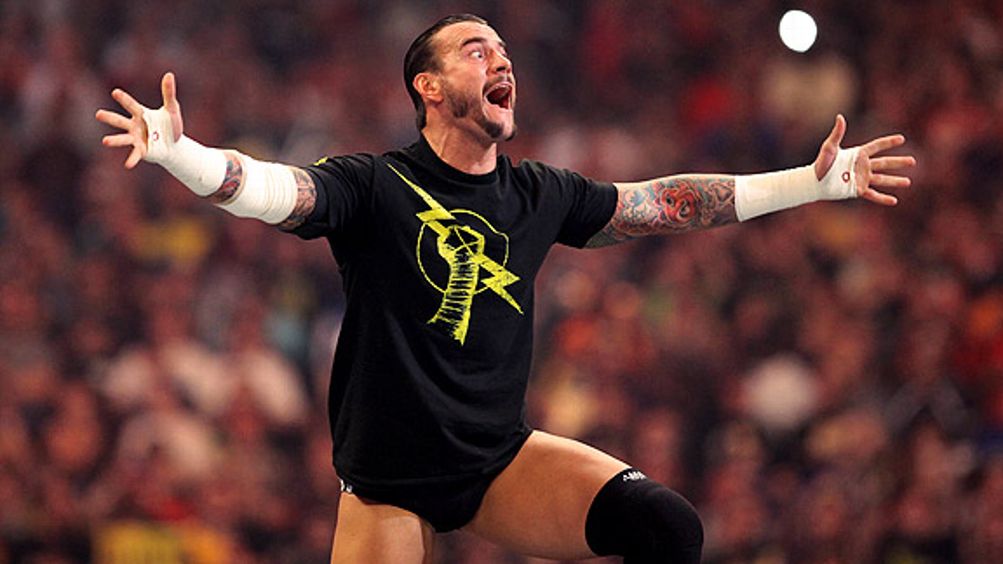 CM Punk is doing snow angels in the wrestling ring. Punk — the most consistently compelling character in the WWE for the past two or three years, the guy who was getting buried as recently as a few weeks ago because, reportedly, he was balking at signing a contract extension — opened the show Monday night on Raw and sat cross-legged in the ring. He made an almost compelling case for being the no. 1 contender to John Cena’s WWE Championship and staged a sit-in, demanding the Anonymous Raw general manager make that designation official.1 The GM insists Punk return to the locker room, and Punk lies back and starts doing snow angels in the ring.

This isn’t just impudent; it’s a direct assault on the tough-guy ethos that undergirds the inanity of the whole wrestling enterprise. When the GM announces that Punk will face off with Alberto Del Rio and Rey Mysterio in a three-way dance to determine the new top challenger, the outro music hits, and Punk starts arguing into the microphone, which has (of course) been turned off. Punk glares at the mic and tries to yell into it again, hoping for a different result. He screams now, in frustration with technology and with his lot in life. His face twists in cartoon anguish. Even on a stage as overblown as pro wrestling’s, it’s the little things that make all the difference.

Of course, it’s the big things that make the history books. Big things like winning championship matches at pay-per-view events. Ten years from now, it’ll probably be written somewhere that John Cena and Randy Orton retained their respective titles at Capitol Punishment this past Sunday night. But if there’s any justice in the world, it should be recorded that CM Punk and Rey Mysterio’s match — with minimal build-up and midcard placement — stole the show.

If had you thought that the Washington, D.C., setting would be incidental to the proceedings, you would have been wrong. Aside from the boorish title of the event, the giant TV screens that make up the set were plastered with images of the White House, and the fireworks that shoot off to start every broadcast were colored red, white, and blue — a spectacle that struck me as a cross between the Fourth of July and the evil forces of COBRA instigating an international incident. Oh, and there was an Obama impersonator, who interacted with some of the lesser talent backstage and came out to the ring before the main event to dance with a wrestler-cum-announcer named Booker T. I wish I could say there was a particularly offensive racial element in there, but alas, it was just stupid.

The ending was so patently unspectacular that all I could remember with any clarity when I woke up Monday morning was the Punk-Rey contest, and Punk’s promise to do that unprecedentedly honest something.6 Only Punk, I thought, could somehow validate such an over-the-top proclamation.

A bit of backstory: For months, rumors have been circulating that Punk’s contract was coming up, and due to a dissatisfaction with his place in the company — he was shuffled back and forth between headline feuds and curtain-jerking spots — and possibly his disillusionment with the wrestling industry at large, Punk was threatening to walk. Those rumors, of course, led to more curtain jerking and losses in big matches; if he was on the way out, the thinking goes, the WWE wouldn’t let him leave on a high note.

So if it was a minor surprise that he won his match at Capitol Punishment — to overanalyze such things in the absence of access to Vince McMahon’s therapy transcripts would be largely fruitless — it was a real shock that Punk was allotted the show-opener spot on the three-hour special “Power to the People” edition of Monday-night Raw. (The gimmick, if it’s not self-evident, is that fans can text in votes to choose matchups or stipulations in real time during the broadcast.) The informed fan would take this as evidence that Punk had re-upped with the WWE. But that wouldn’t exactly prove to be the case.

To get fans to shell out their $50 for a monthly pay-per-view event, the WWE has to build to the affair as if it’s a critical, momentous night, the culmination of a month’s (or more) worth of storytelling. But the past several years have seen the wrestling audience shrink, and it’s the free Monday and Friday TV shows that can serve as siren calls to the disaffected fan — the hugely valuable potential PPV buyer — and so mega-matches and big storyline swerves are advanced on free TV so as to woo the undecided crowd. (Making it even more complicated is the WWE’s deliberate decision to target younger viewers — presumably to replenish the fan base for the next decade — which means it’s primarily serving a clientele who can’t order a PPV without their parents’ permission.)

Punk never quite seemed to fit in with the rest of the pro wrestling coterie. (He’s straight edge, which means no beer or PEDs.) Maybe it’s even the most outlandish things he says seem feasible. Maybe it’s because he’s thumbing his nose at the wrestling establishment, and for that, we secretly want to believe in him.

This was never more apparent than on Monday, when the feuds highlighted at Capitol Punishment were not only revisited but, for the most part, seemingly perpetuated. The whole thing wrapped up with a three-on-three match between Cena, Orton, and Riley against their opponents from the previous night, R-Truth, Christian, and The Miz. The match was elimination-style; the endgame had Orton pinning Truth, Christian pinning Orton, and then Orton hitting Christian with his RKO finisher so that Cena could pin Christian and win the match. Cena and Orton celebrated to end the show.

That’s all well and good, but I’d guess that if the WWE fans got to vote on whether they’d see that ending or something, you know, different and unique, they might have chosen the latter. For the second night in a row, Cena and Orton were victorious, and the most memorable moment was CM Punk midway through the night.

Which brings us that moment of honesty that Punk promised: He acknowledged that his contract was almost up. And (in a hint that the storyline is too convenient to be completely true), he said his contract just happened to end the day after the next pay-per-view event July 17. And that he was going to win the match, and quit as champion.

It should be established that real-life contract disputes have been used as storyline fodder before — basically everything from “real life” has at some point or another been dragged into the murky waters of pro wrestling’s unreality. But Punk’s pronouncement seemed somehow legitimate. Maybe it’s because, as natural as he is on the mic and in the ring, Punk never quite seemed to fit in with the rest of the pro wrestling coterie. (He’s straight edge, which means no beer or PEDs.) Maybe it’s because his constantly evolving messianic routine has made even the most outlandish things he says seem feasible. Maybe it’s because, just as with the snow angels, he’s thumbing his nose at the wrestling establishment, and for that, we secretly want to believe him.

And now comes this guarantee of a victory and subsequent retirement. Pro wrestling has a long and robust history of career-ending matches: the I Quit match, the Loser Leaves Town match, the Career Versus Career match. It’s common enough for a wrestler to say that he’ll quit if he loses; it’s shocking for him to say he’ll quit if he wins.

I know if you’re not a wrestling fan there’s not much I can say to talk you into it, but if you’re on the fence, or if you’re a lapsed fan sitting at home on a Monday night, just watch: the next month is going to be fun. Just DVR the show and skip ahead to Punk — he’s the sketchy looking gutterpunk with the chest piece and stars on his briefs. He doesn’t look much like a wrestler, at least not the kind you’re used to seeing on TV. He looks more like the sort you’d see laying into his buddy with plywood and hammers in a backyard garbage match. He works because he’s so unlikely, because we’ve had it so firmly ensconced in our thinking that a guy like Punk can’t be the guy Punk has become.

In the end, it seems near-certain that Punk’s pending exit is just a storyline. Despite the fact that his current contract is, in fact, about to expire, there are deliberate echoes of the angle Punk ran in Ring Of Honor before he left for the WWE (and Internet sleuths, god bless ’em, have discovered that Punk’s late-Monday tweets affirming his decision to walk away are word-for-word echoes of his LiveJournal statements from 2005, when he was quitting ROH). The beauty of the Punk character is his believability, and, even within the constraints of pro wrestling storytelling, his unpredictability. If he says he’s going to walk away, he might just walk away. He’ll have us wondering, anyway — he has us in the palm of his hands.