Jalen and Jacoby on Police Violence, the NBA, Lil Wayne, and More 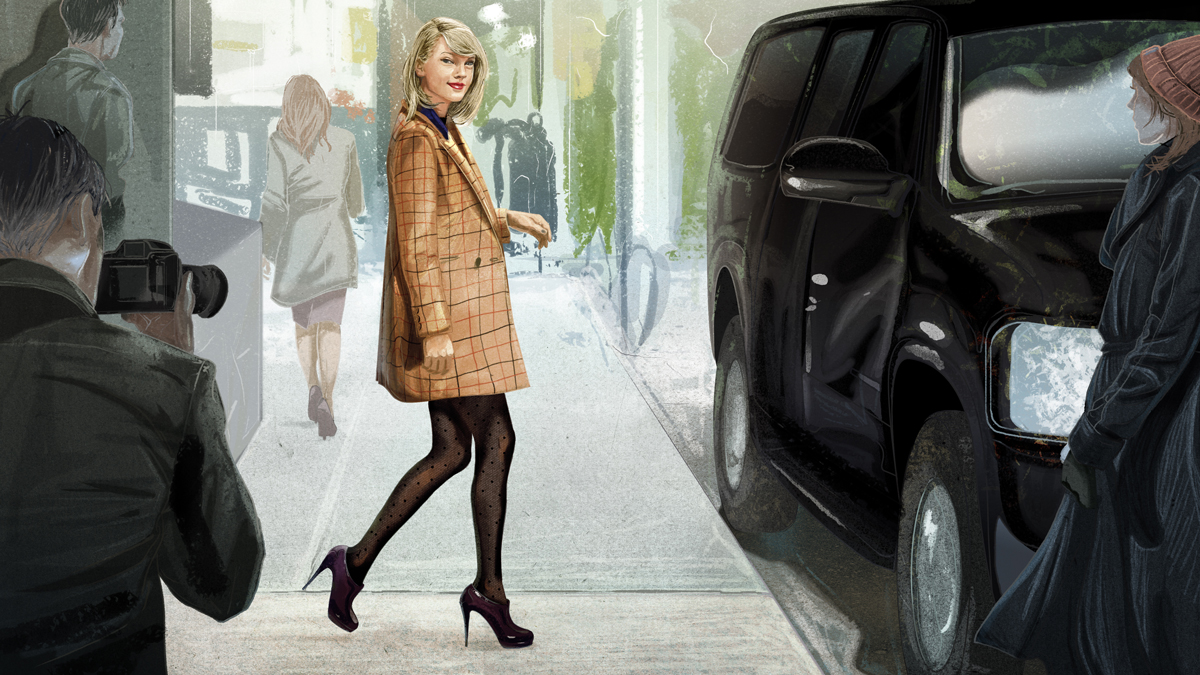 For months leading up to the release of her new album, 1989, Taylor Swift was photographed walking out the door of her new New York town house. Sometimes she was by herself. Other times she was meeting up with a friend like supermodel Karlie Kloss. Whatever the occasion, Taylor’s outfits were always meticulously planned. Swift’s New York style was very femme and purposely put together, often in direct contrast to Kloss, who lives in the off-duty model’s uniform of tees and sweatpants (probably pricey Alexander Wang sweatpants, but nevertheless). Posts featuring paparazzi photos of Swift leaving her house became so common on the celebrity gossip site Oh No They Didn’t! that they got a name: Taylor Swift Walking Posts. Fans would pick apart her outfit choices, speculate about her new music, and wonder why she hadn’t been photographed on any dates with boys lately.

As it turned out, this impromptu parade for the paparazzi was a purposeful new strategy to take the focus off of Swift’s romantic life and put it on all the other awesome parts of her existence. Taylor’s new musical direction on 1989 materialized in advance through her clothes. Where she’d always been known for her vintage-leaning Betty Draper style, the new Swift tried out a variety of up-to-the-moment trends. Old Taylor had been characterized by her extreme modesty; even her bathing suits were high-cut. But the single-in–New York version of Swift was kind of a second-generation Carrie Bradshaw, wearing all kinds of midriff-baring outfits and chic minidresses with impractical heels, making the street her runway. Taylor was a fashion blogger’s dream, staging her own editorials every time she left the house, with a model’s good looks and a rock star’s aura of personality. She experimented with difficult hats, kneesocks, and pets, carrying her cat around like the world’s cutest living accessory. (How does she get her cat to stay still and not freak out? It’s because she is magic.) Most of these outfits, to be honest, fell flat. Taylor is so type A that she can’t achieve a “thrown together” look. Even her most haphazard looks tend to be matchy and styled. Some people have speculated that Taylor’s lack of high-fashion cred stems from the fact that she mixes expensive items with achievable mall brands like Aldo and cherry-picks the best things from online shopping sites. For 1989, she transformed from a Modcloth minx into more of a Nasty Gal. But of course, that is also part of Taylor’s shtick: Just because she can afford expensive high-fashion clothes doesn’t mean she has to wear them. She may not look perfect, because she looks too perfect — but she looks like she’s having fun. She looks like what she is: a twentysomething trying on identities in a metropolis, seeing what suits her best. 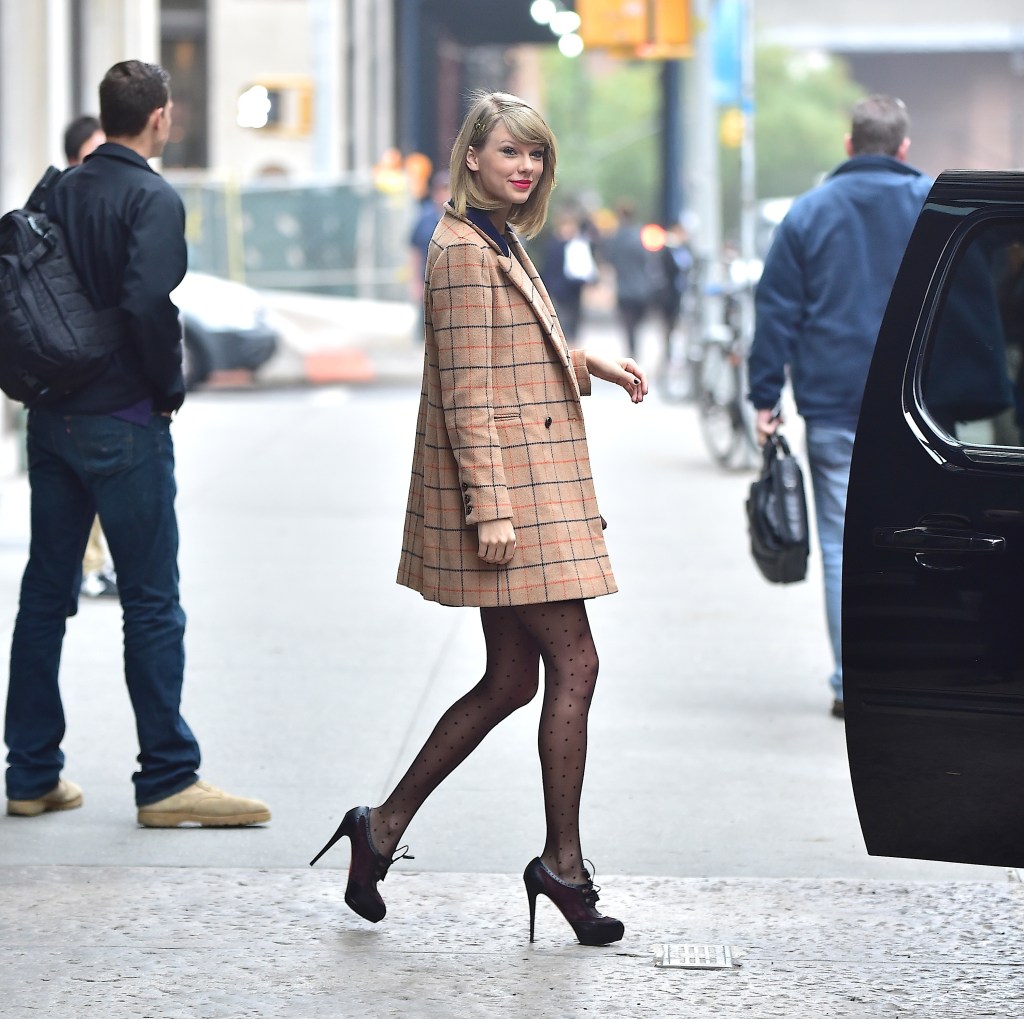 Even though Taylor has been a megastar since she was a teenager, this year she achieved a new level of popularity. She has it all: record-breaking album sales, critical clout, a posse of supermodels to rival ’90s Leonardo DiCaprio’s. What made her not merely rich and famous but an avatar for today’s celebrity, though, was how she managed to temper her megafame with down-to-earth displays and shows of accessibility. After inviting handpicked groups of fans over to her various properties to hear her new album (in a series of “Secret Sessions”), she started buying fans early Christmas gifts after reading about their wishes on Tumblr. With any other performer, these might feel like nutty publicity stunts. But Swift doesn’t need the extra publicity. She’s drowning in publicity. Playing Secret Santa for fans is a natural extension of her brand’s core earnestness. She just really loves Christmas, and she just really loves her fans! It’s something harder than an act. She is pulling off the appearance of living her private life in public.

Some days Taylor looked less than thrilled to see the photographers, but she always managed at least a little fake smile. As the summer wore on, though, she got a little less performatively pleasant, a little more comfortable flashing photographers a less-than-amused expression that would not have looked out of place on Lou Reed. Gone was the “who, me?” surprise face, and in its place was a knowing smirk. Swift was truly becoming a New Yorker. This subtle but believable transformation in the walking photos was a brilliant promo for 1989, crafting Taylor’s new image as a modern Holly Golightly and helping to free her from her previous image and its affiliation with country music. You see, Taylor had always been country, and accordingly, she used to live in Nashville. The move to New York, which had been in the works forever, allowed Taylor Swift to reestablish herself as an urban artist. Sure, laugh it off, but you know that Kendrick Lamar collaboration is coming any second now.

Taylor’s year of treating her front porch like a fashion show paid off. By the time 1989 dropped, we were all already familiar with Taylor 5.0.1 Taylor’s Instagram feed was a carefully curated compilation of her outfits, her apartment hangout playdates with famous friends like Lena Dunham, and, as always, the things Swift baked — a lifestyle blog without the lifestyle blog. Then she started a Tumblr, which she uses to reblog fans and to show off photos of even more things she baked. (Seriously, where does she find the time to do all of this? Is she Wonder Woman?) She just posted a picture of her Billboard Woman of the Year cover with the comment “Thanks Billboard. Also thanks, YOU. (Does dorky celebratory dance then trips over a cat toy).”

Taylor was always aware of what she was doing. She invited us to look at her so that she would not be watched. A Rolling Stone cover story interview revealed her obsession with surveillance and paranoia that her private world could be invaded through technology. It was a year when a number of female celebrities had their privacy invaded in a very violent way, and Swift was well aware she was a target. Her paranoid outlook in the Rolling Stone profile — that she might be snapped changing in a dressing room or bathroom by some untrustworthy soul — was justifiable. We all increasingly live in a surveillance state. But Swift lives in a Brian De Palma movie.

The extremely public Swift is, brilliantly, a cover for the extremely private Swift. It allows her to have publicity and privacy on her own terms. Just like anyone who creates a projected hologram of their meatspace existence through the use of social media, what Taylor is really giving the world is just the appearance of her everything.

Swift provides fans with thoughtfully directed looks into her glamorous life via several routes: Instagram, Twitter, the bonus demo tracks on the deluxe version of 1989. She even released a “360 immersive app” with the Don DeLillo–novelish name “American Express Unstaged Taylor Swift Blank Space Experience App,” which does not actually plug you directly into Taylor’s thought-stream, but the concept seems to imply it. All of this is meant to make us believe we really are getting 360 degrees of Swift’s life. The genius is that we’re really only getting 180. Everything behind the red velvet stage curtain is off limits. And thus, Swift proves again that while she is a Star, she is also just like Us. Her use of social media is like most people’s: presenting a glorified, idealized, faux-carefree version of life. Her songs are an open book, but she writes the stories. Her online persona is just an open tablet — fun, vivid, top-of-the-line, but ultimately two-dimensional. The best part is, it totally worked. She had lost control of the narrative about her dating life. So she changed the conversation. She couldn’t be the sad and crazy single girl stalking her exes if she was the fun, chill single girl enjoying her millions of self-earned dollars in a very expensive place. She even owned up to writing about her exes, recognizing the double standard in how male artists are treated when they spill about their personal lives. Taylor Swift wanted the world to know that not only is she not desperate, she’s also a player. It turns out we’re the ones who love the game.