‘It Hasn’t Been a Disaster’ 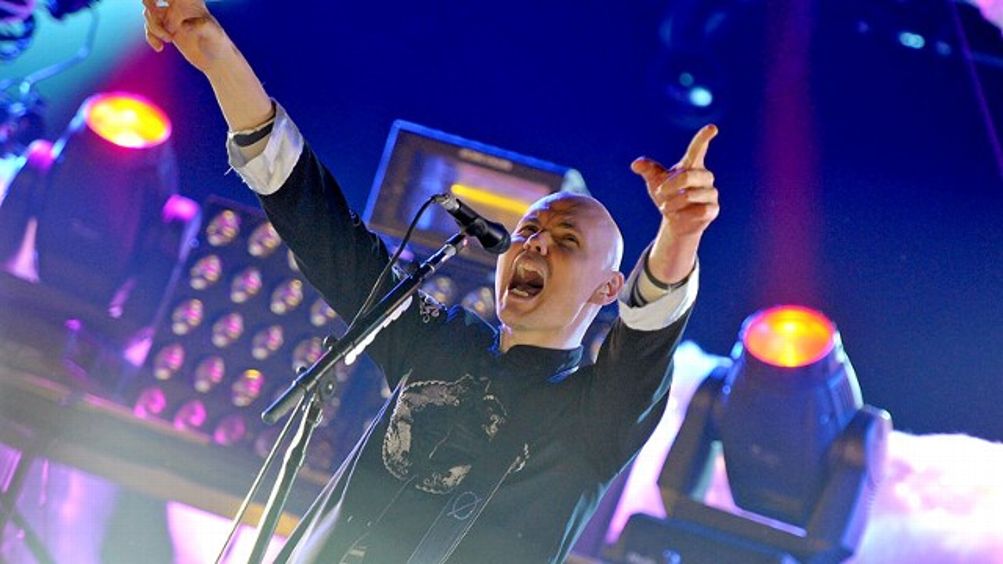 In the annals of ’90s rockers turned frequently insightful and even more frequently vulgar interview subjects, Noel Gallagher’s no. 1 (and probably only) rival is Billy Corgan. And as a new album cycle churns, Corgan has taken the pole position. Recently he’s been in the news for (1) suggesting in an interview with Antiquiet that he’d like to piss on Radiohead because of “pomposity” and Jonny Greenwood’s overrated guitar-playing, and (2) Oceania, his first album under the tattered banner of the Smashing Pumpkins in five years. I’ve listed these stories in order of most reported, not necessarily greatest entertainment value. For those inclined to pay attention to Corgan even when he’s not talking about micturating on alt-era rockers with superior critical reputations, Oceania is a pretty enjoyable record. I’d say it is the best Smashing Pumpkins record since 1995’s Mellon Collie and the Infinite Sadness, though Adore is better than people give it credit for. But if you only follow the Radiohead story and don’t care about Oceania — and that will be most people — you’ll still learn as much about the album (particularly Corgan’s reason for making it) as you would listening to it.

Here is the full quote from Corgan’s Antiquiet interview: “I can’t think of any people outside of Weird Al Yankovic who have both embraced and pissed on rock more than I have. Obviously there’s a level of reverence, but there’s also a level of intelligence to even know what to piss on. ‘Cause I’m not pissing on Rainbow. I’m not pissing on Deep Purple. But I’ll piss on fuckin’ Radiohead, because of all this pomposity. This value system that says Jonny Greenwood is more valuable than Ritchie Blackmore. Not in the world I grew up in, buddy. Not in the world I grew up in.”

If you’ve been following Corgan for these last 20 years, and know how to parse the cogent thoughts from his thatches of twisty-turny grandiosity, you might understand that he’s not talking at all about Radiohead here, and only a little bit about Weird Al and perhaps slightly more about Ritchie Blackmore. That Billy Corgan quote is mainly about Billy Corgan; Al and Ritchie are manifestations of how Corgan sees himself and his place in rock music. He is criticizing the value system that says fashionable and arbitrarily acclaimed (in his view) bands are considered more valuable than he is. Unfortunately, this is the world you grew up in, buddy. Corgan’s feelings of persecution at the hands of a vast, underground, oppressively aloof hip-stapo have been central to his music since at least “Cherub Rock,” one of the few golden-era Smashing Pumpkins oldies that Corgan never seems to tire of playing.

In interviews promoting Oceania, Corgan has talked about rediscovering his creative voice, and how he hopes the album “reignites the flame within [him] and the audience.” I have no idea if Oceania will “reignite” the audience, but it’s not a totally crazy idea; judging by contemporary rock radio, where mid-’90s Smashing Pumpkins hits are ubiquitous like Foreigner’s 4 on 100-point-something The Bear, Corgan’s corps of fans is bigger than you might expect. And Oceania is his first honest attempt in a shamefully long time to deliver a record that this group might actually want to hear. Not that Corgan wanted any part of that sort of thing initially; dubbed an “album within an album” spun off from the web-based, 44-song Teargarden by Kaleidyscope project, Oceania is intended to galvanize a fan base that’s been only fitfully interested in Corgan’s ongoing and insanely ambitious plan to paint his masterpiece one MP3 at a time. All his fans ever wanted in the first place was a regular goddamn Smashing Pumpkins record, and Oceania is Corgan trying not to be a dick about it for once.

If you grant Corgan a mulligan for the preposterous opener “Quasar” — the one where Billy whines, “God right on! / Krishna right on!” like an adenoidal George Harrison — Oceania gets off to a winning start with the somewhat less preposterous “Panopticon,” as a six-string army marches heavenward toward one of those spotlessly shiny Billy Corgan choruses hearkening back to a simpler time when Itos danced and Matt LeBlanc displayed promising chemistry with chimps and Lisa Kudrow. Then Oceania really gets cooking with a decent “Disarm” redux (“The Celestials”), a solid stab at rewriting the epic Gish era B-side “Starla” (the nine-minute multi-part title track), an almost-excellent synth-pop number that nods to Adore (“One Diamond, One Heart”), and a nice duet with the fake D’arcy whom Corgan now has playing bass (“Pinwheels”). There’s even a good Achtung Baby knockoff (the stately “Pale Horse”), since he was already in the neighborhood of the ’90s and all.

There’s no question Corgan can still make propulsive pop-rock ear candy when he wants to. Where the doubt comes in is whether he’s too late. Any lingering interest in newly written, squint-and-you’d-swear-it-was-them approximations of “Today” and “Bullet With Butterfly Wings” has perhaps already been sated by younger chuckleheads like Silversun Pickups. But make no mistake — the flame has definitely been reignited in Corgan, and it burns hard and bright on a steady supply of his oldest, truest creative fuel: resentment.

Resentment was very good to Corgan when he invented the original incarnation of Smashing Pumpkins and made it the biggest band of alt-rock’s last, lurching stand in the mid-’90s. It grew — as only the purest, most potent reservoirs of resentment do — from out of the Midwest, festering inside the pinched heart of a nerdy metal kid who knew he would never be accepted by the Thurston Moores and Stephen Malkmuses of the world, with their stupidly perfect mussed hairdos and mysteriously crucial connections to skateboard culture and world-class noise-rock collections. To them, no matter how fast he shredded or how high his choruses soared, Billy would always have sweaty palms and pockmarks and a ruthlessly flowing mullet. Guys like that can just smell the hayseed on you, even through your paisley-colored rock-star clothes, and they’ll never let you forget your place.

In reality, this scenario was only at most 65 percent true. But it motivated Corgan to construct the sparkling guitar cathedrals of 1991’s Gish and 1993’s Siamese Dream. If they wouldn’t induct him into the cool-guy alt-rock fraternity, he would crush them with enough guitar overdubs to choke Tom Scholz. Corgan blew his wad of spite on the double-album magnum opus Mellon Collie, which cinched him as a one-man Brill Building for grunge singles while suffocating his muse in the process. Superstardom vindicated Corgan, but vindication was the last thing his music needed, because it proved once and for all that his ambition wouldn’t ultimately redeem him. Popularity ended up killing off Corgan’s most vital self; he soon shaved his head and dolled up in white face makeup like a real Nosferatu, only he truly was an undead creep cursed to hunger for what he couldn’t have for all eternity. And so he remains, even when he plays the loyal entertainer on Oceania. Corgan’s fate is to be successful and estranged from the world, or marginalized and ignored by it.

Here is another, not-quite-random example of Billy Corgan talking about himself under the guise of talking about another band: “Every once in a while you have an artist that is very sophisticated, but somehow in their sophistication they don’t alienate the common person. They’re really a people’s band. The great hole in their career is that they’ve never been truly accepted by the intelligentsia … What was it? They just don’t fit in a neat box.”

This is taken from the 2010 documentary Rush: Beyond the Lighted Stage, where Corgan appears as a talking head alongside guys like Foo Fighters’ Taylor Hawkins and the dude from Pantera with the majestic sideburns. Corgan, unsurprisingly, stands out from the pack, admitting he spent a year in his bedroom learning how to play all 20 minutes of “2112” and reminiscing that he once sat his mother down, Zooey Deschanel in Almost Famous–style, to play her “Entre Nous” (from 1980’s Police-biting Permanent Waves) so that she might peer briefly into young Billy’s soul. Only Corgan’s bitching about “the intelligentsia” rings false. Not because what he says isn’t true (for Rush or himself), but because it has no place in the Rush universe.

This is a band (unlike Smashing Pumpkins) that has kept the same lineup in place for nearly 40 years, in part because (unlike Corgan) Geddy Lee, Alex Lifeson, and Neil Peart have always accepted who they are and who they are not. Rush is our great asexual rock group. (Sorry, Iron Maiden!) It is celebrated for taking the work of polarizing firebrand Ayn Rand, gutting the troublesome fascism, and stuffing it full of teenage alienation and ridiculous time signatures. Musically, where most rock bands aspire to the spontaneous recklessness of a barroom brawl, Rush emulate the studied precision of an expert marksman, striking with anal-retentive directness and whizzing, high-pitched shrieks. In form, Rush is the antithesis of punk; in spirit, it is the epitome of rock-and-roll perversity. Rush never complained about not being perceived as cool because being cool was never the point.

Even for Rush, their new Clockwork Angels is aggressively Rush-like. It is a wonky, pointedly proggy sci-fi concept record about the power of the individual to overcome any hurdle; in this case, it’s an evil watchmaker (he’s named The Watchmaker) who battles the hero amid a steampunk-inspired hellscape populated by pirates and carnies. (If that sounds too heady for a rock record, you can wait — no joke — for the planned novelization.) Like everything Rush has ever done, this will either sound amazing or as palatable as listening to two guys from Guitar Player argue over the accuracy of their favorite Dream Theater tablatures. As Neil Peart (arguably rock’s greatest drummer and inarguably its greatest drummer/polemicist) has sternly reminded us, over and over again (since “Anthem” on 1975’s Fly by Night, the first song of his first LP with the band), the choice is yours, young Padawan. Either way, Rush will not change, and therefore will never have to change back.

By the way, I’m solidly in the “amazing” camp on Clockwork Angels — though I’ve listened to it front-to-back at least a half-dozen times, and I’m still not sure if the songs are really as great as I think they are. It’s possible they only sound great — Lee’s bass playing is absolutely metallic and flails about with steely talons, Lifeson goes nuts with a myriad of guitar textures and roid-rage riffs, and Peart remains rock’s preeminent percussionist ninja. The only track that jumps out at me is “Wish Them Well,” which also happens to be the simplest and poppiest. (I also love the boisterous “The Wreckers,” which the liner notes tell me is the one about a disastrous pirate attack.) But otherwise Angels is that oldest of dinosaurs: an album that is best appreciated when heard in its entirety, preferably alone, in a place where you can air-drum without judgment.

There I go, pulling a Corgan and worrying about that damned intelligentsia. In the realm of Rush, Clockwork Angels is business as usual, the latest outgrowth of a big, wide world that was born when Lee and Lifeson first bonded over being oddball outsiders in the eighth grade. Rather than try to fit in, they built their own tent and invited other oddball outsiders to gather under it. Over the years, that tent has grown improbably large; Rush is a group that even many serious rock fans know nothing about. If you like them, you’ll never know as much as the hard-core allegiants. One of those oddballs was Corgan, though he eventually left to be a rat in a cage, despite all his rage. If only he’d found his own Geddy Lee in junior high, things might’ve been different.