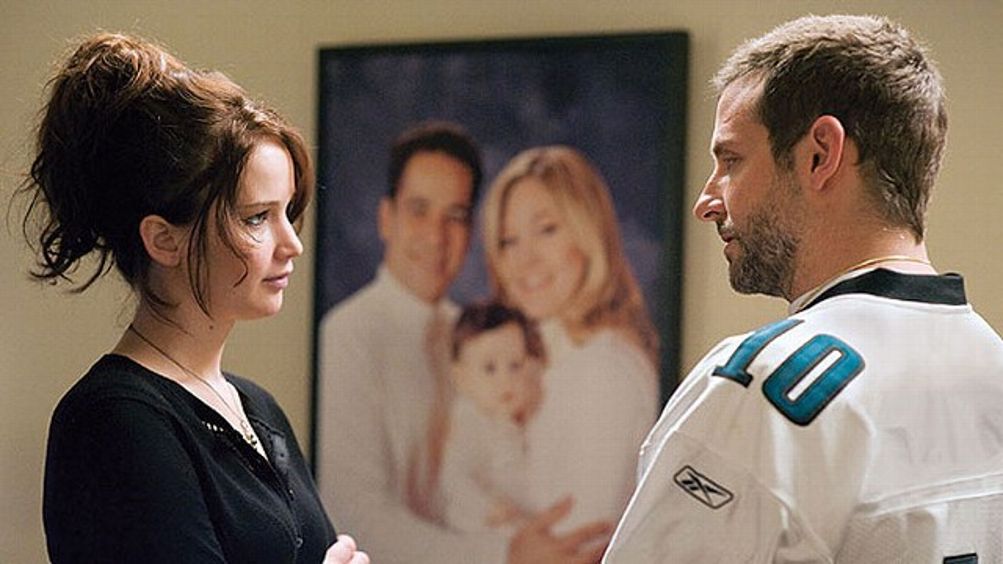 Let’s start here: Silver Linings Playbook is the best sports movie in years. Maybe not in the traditional sense — we never even see a game. But in the sense of how we live with sports in the context of our daily lives, how they organize all kinds of other life experiences that have nothing to do with sports, how the teams we like make us who we are in small but specific ways? Best sports movie in years.

The film has been out in limited release since Friday, so maybe you already know a little bit about it. Bradley Cooper plays Pat Solatano, a violently bipolar schoolteacher coming off eight months in a Baltimore psychiatric facility — his timid mother (Jacki Weaver, wearing a Kevin Kolb jersey) checks him out, probably prematurely. Pat moves back home into his parents’ house in Philadelphia, where his dad, Pat Sr. (Robert De Niro, in an almost unrecognizably present performance), having lost his job, dreams of opening a cheesesteak restaurant with money he plans to make gambling on Eagles games. Pat Sr. has been banned from the stadium after getting into too many fights, so he watches at home on Sundays in an OCD trance, clutching a handkerchief, wearing a bright-green cardigan, doing superstitious things with the remote control.

The younger Pat comes home resolved to win back his estranged wife (Brea Bee), an English teacher, through a self-improvement regimen that consists of running around wearing a garbage bag and reading great books from her high school syllabus, like Lord of the Flies. At a dinner party one night — he arrives wearing a DeSean Jackson jersey — he meets Tiffany (Jennifer Lawrence), a young widow who is as elaborately damaged as he is. She draws him in by promising to help him get his wife back; in turn, he agrees to be her partner in a local dance competition, which is how you know you’re watching a David O. Russell movie.

The ways in which Pat, in his pitiable mix of out-of-control rage and deranged optimism, is a product of his struggling underdog city and the maddening football franchise that it hosts will probably be obvious to most readers of this site and lost on a solid percentage of non-sports fans who go see the movie. You have to know Philly, know the Eagles to really get it, how each of these characters is simultaneously badly scarred and up for more punishment. Silver Linings Playbook is a few different movies at once, but one of those movies is about the complicated interplay between a city’s sports teams and a city’s citizens, the way that over time the two start resembling one another.

If there’s been a better representation of the complicated but very real overlap between the football field and the city full of people that surrounds it, I haven’t seen it.

The film is set in 2008, and in one scene, De Niro’s Pat Sr., devastated in the aftermath of a loss to the Giants and despairing of his erratic son, begins yelling at Cooper’s character, telling him he’s dropping the ball on his life like DeSean Jackson dropped the ball at the 1-yard line — the end zone loomed wide open for both, and neither could find a way in. The comparison tells you everything you need to know about this family and the younger Pat’s failure to be a good member of it. It also tells you a lot about certain kinds of fathers and sons, how they talk to each other, the way in which invoking Jackson is a safe way of invoking something that’s dark and otherwise hard to say out loud. If there’s been a better representation of the complicated but very real overlap between the football field and the city full of people that surrounds it, I haven’t seen it.

It’s a romantic comedy, mostly. It takes a little while for that fact to emerge. Everyone is so damaged and wounded and off-kilter that you don’t initially see that it might just work out for them — in that sense, it’s like The Philadelphia Story, a movie that takes place just a few miles from where Silver Linings Playbook is set. David O. Russell is an optimist at heart, he’s drawn to happy endings, but his way into a character is always through his or her flaws. He’s old-fashioned in that respect. He knows that people are most lovable not at their best but at their worst. The first night Cooper’s Pat and Lawrence’s Tiffany meet, at a dinner party with her sister (a flinty Julia Stiles) and a friend of his (John Ortiz, an underrated comic actor), she tells him: “We’re not liars like they are.” In the world of David O. Russell, there is no higher compliment.

Once, George Clooney was seen as a lightweight, a soap opera guy, and Russell — along with Steven Soderbergh, who directed Clooney in Out of Sight — almost single-handedly helped change that perception, finding in Three Kings angry fissures in the actor’s then repellently smooth persona. Russell does the same thing for Cooper here. Gone is the heavily lidded bachelor party mascot of The Hangover and Wedding Crashers. In his place is a wild-eyed husk of a man who wakes his parents in the dead of night to complain about the unhappy ending in A Farewell to Arms and who accidentally punches his mother in the face when she won’t help him find a VHS copy of his wedding video. He roams the neighborhood in his garbage bag, does the bird dance at Eagles games, banters gamely with his best friend (a melancholy, charismatic Chris Tucker, about to see a hundred Adam Sandler–in–Punch-Drunk Love type of scripts), and tries desperately to stay positive even as he loses what little control he has. It’s a you-know-nothing-of-my-work-caliber level of intelligent, empathetic performance from a guy who once seemed doomed to a career’s worth of characters named Faceman and Sack.

And you might not even notice that he is there, because Jennifer Lawrence is playing opposite him, and she is — I mean, she is Godzilla stomping a building, she is a Just Blaze beat, she is all the natural disasters at once. Her Tiffany — married to a dead cop whose wedding ring she still wears — is all brave exposed nerves, honest about herself to the point of sadism. “There’s always going to be some part of me that’s sloppy and dirty,” she tells Pat. But most of the time, at least, she’s OK with that. For a while, she ambushes him while he’s jogging — Russell makes a running joke of it, pushing in the camera from weird angles, leaving Pat surprised every time she suddenly arrives — and then they become dance partners, which sounds unbearable in the abstract but in practice is played matter-of-factly, as though this is just what two crazy people do to help each other get better. And it works, after a fashion — they take turns escalating and soothing one another; she nearly gets him arrested, and he calls her a “married-to-a-dead-guy slut.”

In one late scene, De Niro’s Pat Sr. blames a string of bad betting luck on his son’s lousy karma. Tiffany responds with an avalanche of winning Philadelphia sports scores and their corresponding dates, which invariably match up to time she and Pat spent together. What is the delicate way to say this? Jennifer Lawrence angrily rattling off select Eagles victories and highlights from the Phillies’ 2008 championship run, score after score, game after game? If you perhaps happen to be from Philly you might have a heart attack right there in the theater.

I guess here is as good a place as any to admit that I do happen to be from Philly, and that this movie’s sports-as-autobiography conceit is heroin to a person who has lived big pieces of this particular sad story. What I remember from 1993 is the Wild Thing and Joe Carter’s bottom-of-the-ninth home run. Summer camp was a daily three-day-old Phillies box score sent in the mail by my mother. In moments of stress I still see McNabb in that two-minute drive that lasted four, heaving in the huddle. I received a 7:41 a.m. text message from a friend back home while writing this paragraph. It read: “Can the walrus.”

Silver Linings Playbook isn’t explicitly about Philadelphia, exactly, but it’s still among the best movies ever made about the city — at least since Trading Places and Philadelphia, and maybe ever. When Pat lapses on his medication, or fails to behave, his family threatens to send him back to the psychiatric facility in Baltimore, which is in a way every Philadelphian’s worst nightmare, being sent to Baltimore. Tiffany’s husband dies en route home from the Victoria’s Secret at the King of Prussia Mall. The movie is mostly set in Upper Darby but there are scenes in the parking lot of the Linc and in the Diamond District and at the old Benjamin Franklin Hotel. Cooper, a Philadelphia native, goes light on the accent but wears the native uniform — white T-shirts and thin gold chains and stray bruises on his face from scrapping with his own father — like a natural.

It’s nice that it’s Philly, but it didn’t have to be: Russell did a similar thing for Lowell, Massachusetts, in The Fighter. He understands that the city makes the man, whatever that city happens to be. Every place on the planet has a version of the particular existential abyss that is the wasted Andy Reid timeout. Everyone carries something like the Phillies’ ghastly all-time win-loss record around with them. It’s in our blood, like the mental disease the movie suggests Pat Sr. passed down to his son: the father’s OCD manifesting as something more unhinged and dangerous in his child. But that specific form of insanity is also what unites them, what provides their common language — just as Tiffany and Pat come together not in spite of their respective neuroses but, in an important way, because of them.

Riding to the stadium one day, Pat Sr. gives his son some advice, advice he as a man failed to follow, advice that is at once particular to this family and as universal as can be. “Don’t drink too much, don’t hit anybody, you’ll be fine,” he tells Pat, dropping him off at an Eagles-Cowboys game. Pat drinks too much, hits somebody, and is not fine. But at least — like everyone else in this great movie — he’s trying. At least he’s got help.