The Song of Solomon 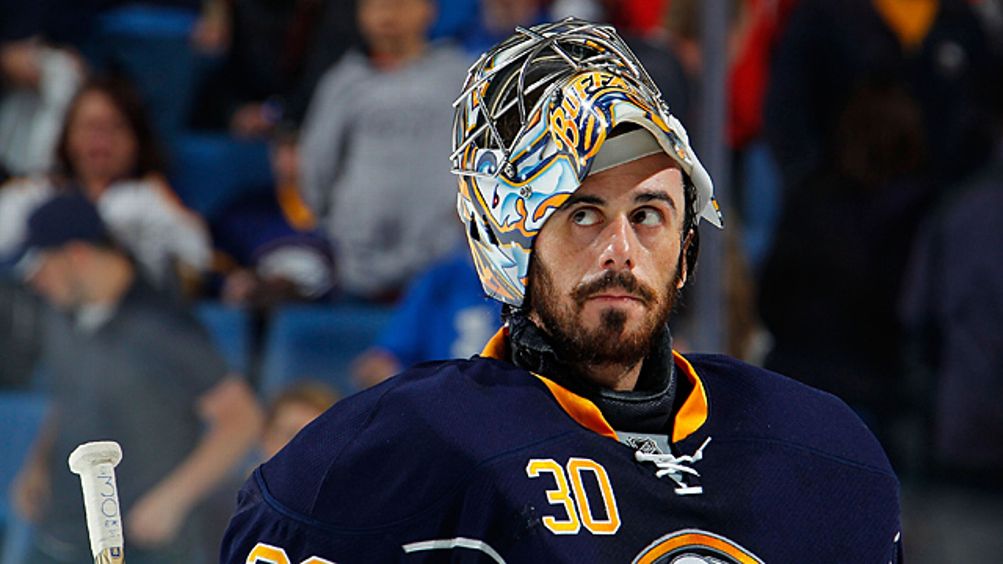 After weeks of rumors that they were on the verge of a major deal for a marquee goaltender, the Edmonton Oilers finally pulled the trigger on the season’s first trade Monday, agreeing to send … a fourth-liner to the Sharks.1

OK, so that may have been a little bit anticlimactic. But at least it was a reminder that we’re entering the part of the season when GMs start making moves. And this year, the early rumor mill has had a running theme: goaltending. That’s not terribly unusual, as the position is a point of focus for most teams, but this year’s chatter seems especially intense. At some point this season, the thinking goes, we’re going to see some blockbuster goalie deals.2

So it’s probably a good time to assess the trade market — what’s the established worth of a decent NHL goaltender? As it turns out, that’s not an easy question to answer.

First, let’s look at the current landscape. Last week, rumors flared that the Oilers might be close to acquiring Sabres goalie Ryan Miller, perhaps along with Thomas Vanek, in exchange for a package that would include 2012 first-overall pick Nail Yakupov. While Yakupov has struggled somewhat over his first two seasons, he’s still an elite prospect and would be tough to give up. After a few days of speculation and debate,3 it became apparent that nothing was imminent after all, and everyone moved on.

The Edmonton rumors won’t be the last to swirl around Miller, who was probably the best goalie in hockey four years ago when he won the Vezina and led the U.S. Olympic team to a silver medal. He hasn’t reached that level since, but he’s still very good, and this year he has played as well as anyone could expect on a terrible Sabres team. Buffalo will almost certainly have to move him before he hits unrestricted free agency in the summer. Miller may end up being the biggest name traded this season, and Sabres fan have already spent much of the season speculating on what the eventual return will look like.

But Miller is only one of several good goaltenders who could be available. Brian Elliott appears to be the odd man out in St. Louis. The Ducks could be willing to trade pending free agent Jonas Hiller, and the Caps might deal Michal Neuvirth. It’s less likely, but the Senators could decide to move either Craig Anderson or Robin Lehner. And the Leafs might trade James Reimer, assuming the newly acquired Jonathan Bernier solidifies his status as the full-time starter.

And that’s only a partial list, which leads us to our first problem: The list of teams with goalies to move seems notably longer than the list of those looking to acquire one. The Oilers — a talented team that stumbled through a disappointing first few weeks of the season — were the biggest name in the latter group. But incumbent Devan Dubnyk has been much better after a rough start, so the Oilers aren’t under as much pressure to deal.

Beyond Edmonton, the list of buyers gets pretty thin. Sure, the Penguins will want to add a solid backup if Tomas Vokoun can’t return,4 and other teams are always looking for depth at the position. But does anyone need a starter? You could make a case for the Islanders, where Evgeni Nabokov has been struggling lately. Maybe the Flames, but they’re rebuilding and wouldn’t be in a hurry to deal. You’d be tempted to include the Flyers out of force of habit, except Steve Mason has been fine so far.5

One slump or well-timed injury can change everything, but there just don’t seem to be many teams that need goaltending right now. And there certainly aren’t enough to provide homes for all the potential starters who could be available.

To further complicate things, there are still some decent goalies on the free-agent market. Jose Theodore is looking for work, as is Johan Hedberg. And then there’s our old friend Ilya Bryzgalov, apparently done with his ECHL tryout but still waiting for a shot to return to the NHL.6 Are any of those guys going to provide better goaltending than someone like Ryan Miller? Not likely. But if the choice is between trading valuable assets and adding a free agent who won’t cost you anything beyond cap room, then the second option can start to look appealing.

That means we’re left with lots of sellers, not many buyers, and a handful of reasonable options available for nothing. Suddenly, that goalie market doesn’t seem all that enticing.

This territory isn’t exactly unfamiliar, and goalies still get traded all the time, sometimes for excellent returns. But can we find any tendencies in those previous transactions that would help us figure out this year’s market for someone like Miller? I spent some time going through the list at The Goalie Archives, looking back at all the deals since the salary cap was introduced in 2005 to figure it out.

By my count, there have been just under 90 trades that involved at least one goaltender during that time, for an average of 10 or 11 per season. But most of those were deals for prospects or minor league depth guys in whom we’re not especially interested.7 So let’s narrow down our search by limiting it to trades that involve a goaltender who was either a recent NHL starter or moved to a situation where he had a good chance to become one.8

Those criteria bring us down to an even 30 notable goalie trades since 2005. Here’s the list, in chronological order:

August 10, 2005 — Chicago trades Jocelyn Thibault to the Penguins for a fourth-round pick.

March 8, 2006 — Minnesota trades Dwayne Roloson to Edmonton for a first-round pick and a conditional third.

July 5, 2006 — Vancouver trades Dan Cloutier to the Kings for a second-round draft pick and a conditional pick.

February 26, 2008 — Tampa Bay sends Mike Smith to Dallas, along with Jussi Jokinen, Jeff Halpern, and a fourth-round pick, as part of the deal that brought Brad Richards and Johan Holmqvist to Dallas.

July 1, 2011 — Washington trades Semyon Varlamov to Colorado for a first-round pick and a conditional second-round pick.

There are a few takeaways here, not the least of which is that we probably should have put some sort of warning for Maple Leafs and Flyers fans at the top of this piece to prevent them from reading any further.

More importantly, the return on a starting goalie is all over the map, ranging from failed prospects like Ty Wishart all the way up to future superstars like Tuukka Rask. That probably shouldn’t surprise us, since the trade market for goalies has always been unpredictable. Dominik Hasek was the reigning Vezina winner and arguably the greatest goalie of all time when the Sabres sent him to Detroit for a late first-round pick and one year of Vyacheslav Kozlov in 2001; the Blue Jackets got nearly as much in exchange for Ron Tugnutt the next year. A 31-year-old Grant Fuhr landed the Maple Leafs a proven 50-goal scorer and first-round pick in 1993; two years later, a 30-year-old Patrick Roy got the Canadiens barely anything at all.12

You get the picture. There’s clearly an element of timing, opportunity, and, yes, luck. But if we dig a little deeper, we do start to see some categories emerge. Such as:

• The good young goalie who’s pretty much considered a sure thing. This guy will come with a high price, usually a first-round pick (Varlamov, Schneider) or multiple prospects (Halak).

• The good young goalie who hasn’t had the opportunity to fully prove himself. He’ll probably get you a second-rounder (Bernier, Bishop, Lindback, Huet) or a prospect (Raycroft).13

• The dependable but unspectacular veteran who can usually be had relatively cheaply. Guys like Chris Mason, Jocelyn Thibault, and Steve Mason all went for a mix of midround picks and role players coming back the other way.14

• The apparently dependable veteran who turns out to be a lot more than that. This would include Sergei Bobrovsky and Kari Lehtonen — two guys who were both dealt in their mid-twenties and can serve as our cautionary examples of what can happen when trading away a youngish goalie goes horribly wrong.

A broader theme jumps out: the good goalie who just got stuck behind someone better (or at least it seemed that way at the time). That would include guys from almost every one of our categories, including Vokoun, Toskala,15 Halak, Schneider, and Bernier. In fact, that scenario seems to account for most of the big names who were dealt. It’s downright rare to see a team move a decent goalie unless it has a backlog at the position. 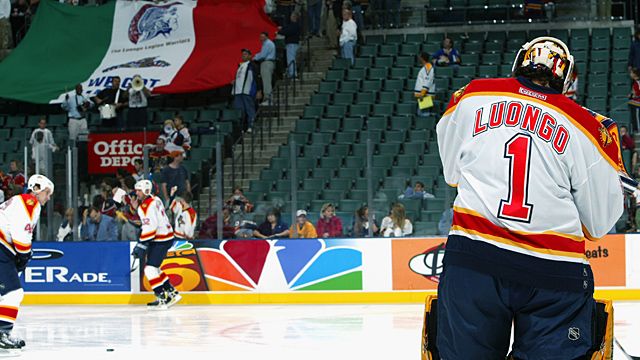 Buffalo will argue that Miller doesn’t fit into any of those categories and should instead be considered a star player still in his prime. And that leads us to the one major deal on our list that we haven’t talked about yet: Roberto Luongo going from Florida to Vancouver in 2006.

That scenario has some definite parallels to Miller’s. The 2006 Panthers were a bad team, as are the 2013 Sabres.16 Both goalies were established stars. Both were entering the final year of their contract before hitting unrestricted free agency. And in both cases, a long-term extension looked more and more unlikely as the process continued, making a trade start to feel inevitable.

But that’s where the similarities end. Luongo was 27 when he was dealt; Miller is 33. Maybe even more importantly, Luongo was dealt during the 2006 offseason, while the Sabres failed to move Miller this summer and ended up holding on to him into the season. That changes the dynamic significantly — of the 30 deals on our list, 17 took place in the offseason, including most of the big ones. If it’s rare to see a top goaltender traded at all, it’s especially rare to have it happen during the season.17

Miller and Luongo aren’t directly comparable after all, and that might end up being good news for the Sabres, since the Panthers and then-GM Mike Keenan got taken to the cleaners on the Luongo deal. Allen and Auld were barely more than throw-ins, meaning this deal amounted to Luongo for Todd Bertuzzi. And while Bertuzzi had been considered one of the league’s best wingers as recently as 2003, he was 31 years old and still dealing with the fallout of his attack on Steve Moore.18 He played just seven games with Florida before being sidelined with a bad back, and was eventually traded to the Red Wings for Shawn Matthias and a pick. So in essence, the Panthers ended up trading Luongo — a multi-time All-Star and Vezina nominee — for a package centered on a player who scored one goal for them. Not surprisingly, the deal is widely regarded as one of the most lopsided in hockey history.

So settle in, fans of the Sabres and any other team with a goaltender on the trade block. You may be waiting awhile, you may have trouble finding a trade partner, and you may not get as much in return as you’re hoping you will. We may not know much at all about what you should expect. But at the very least, we know what the worst-case scenario looks like. Mike Keenan and the Florida Panthers have us covered there.