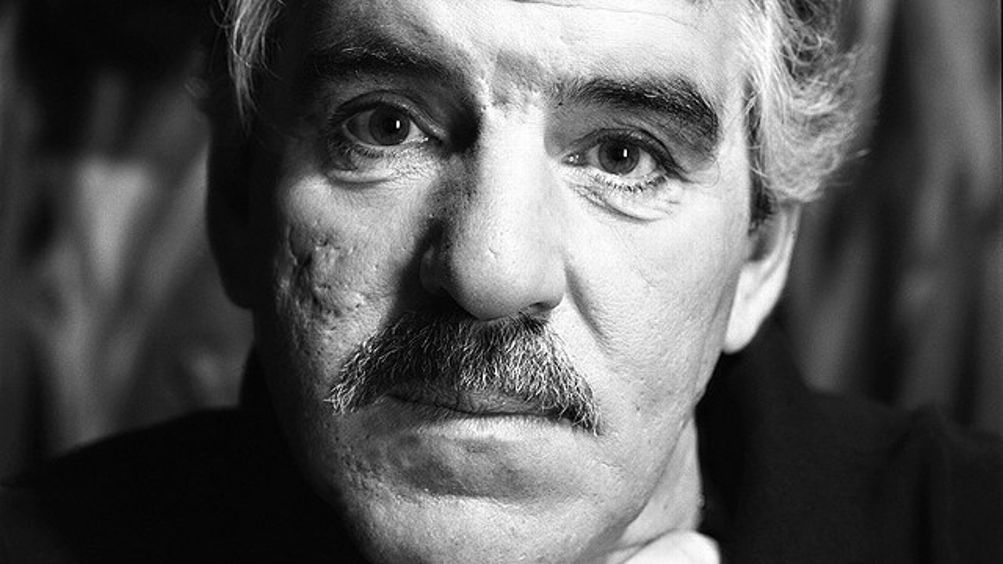 On Monday, when I read that the craggy ex-cop turned character actor Dennis Farina had died of lung cancer in Scottsdale, Arizona, the first person I e-mailed was my dad. I’m the second-biggest Dennis Farina fan in my family. My dad loved Miami Vice, whose first-season finale featured Farina as the mob boss Al Lombard. To this day, we’ve never had a conversation about Farina that didn’t involve one of us repeating the words Lombard cold-bloodedly intones to one of his thugs, regarding the disposal of a traitorous lackey: “Take him out. Shoot him.”

That’s my Dennis Farina story. My dad has a better one. Back in the ’90s, when he was a full-time ad guy, he had occasion to audition Farina as a potential voice for some radio and TV spots. My dad’s in a control room in San Francisco; Farina’s being piped in from somewhere else, maybe Chicago, via then-newfangled fiber-optic technology. He reads some copy. Everything goes well. Eventually the client will decide not to use Farina after all. But my dad takes advantage of the moment and asks Farina if he’ll do “Take him out. Shoot him”1 as a favor.

Farina obliges. Gives him a couple of readings. Then, over the wire, he says to my dad, “Poetry, ain’t it, Jim?”

Farina was a working actor for 30 years, but he didn’t start until he was 37. He spent three years in the Army after high school, then joined the Chicago police department in 1967. He started out as a patrolman, made detective, worked in the burglaries division, then moved up to the major crimes task force.

Farina had a friend named Chuck Adamson, who’d retired from robbery-homicide to seek his fortune as a writer in Hollywood. Adamson and Michael Mann worked together on the script for Mann’s first theatrical feature, Thief, an adaptation of the autobiography2 of a real-life Chicago jewel thief whom Adamson had sent to prison. When Mann went to Chicago to scout locations for the film, Adamson suggested he look up Farina.

“He did, and we talked and walked around a bit,” Farina told the Washington Post in 1987. He said he thought nothing of it after that, until his phone rang a few days later. Mann had decided to cast him in a small role in Thief, and the wardrobe department needed Farina to come in for a costume fitting. He still thought it was a joke. “I went down,” he said, “but I thought they just wanted to have breakfast.”

Thief featured a number of other destined-for-ubiquity tough-guy actors in their screen debuts, including William Petersen, James Belushi, and Robert Prosky, who played the Chicago Outfit boss who tries to strong-arm James Caan into working for him. But Mann also cast actual hoodlums as policemen, and vice versa. The bent cop Urizzi was played by John Santucci, a real-life safe-cracker whom Farina had once busted while working burglaries. Farina played one of Prosky’s thugs. In the film’s final shootout — set to a public-domain knockoff of Pink Floyd’s “Comfortably Numb” in what we would come to know as classic Michael Mann fashion — it’s Farina who almost takes Caan down.

Farina would always say that he’d seen acting as nothing more than a lucrative side job at first. After Thief, he booked a small role in an episode of Chicago Story, a short-lived network drama whose interlocking cops/lawyers/doctors story lines anticipated Law & Order and The Wire. He met John Mahoney on that set. Mahoney encouraged him to try the stage.

Farina played a cop with a troubled home life in a 1982 Steppenwolf Theater production of Thomas Babe’s Vietnam allegory A Prayer for My Daughter, directed by John Malkovich, and a brutal drill sergeant putting his squad of “maggots” through their paces in a 1984 production of Tracers, directed by Gary Sinise.

He didn’t turn in his badge until September of ’84. By then he’d been cast opposite Petersen in Mann’s second film, Manhunter, based on Thomas Harris’s Red Dragon. He was the first of four actors to play FBI director Jack Crawford onscreen — Scott Glenn, Harvey Keitel, and Laurence Fishburne (on TV’s Hannibal) would follow in his footsteps. Nobody talks enough about Manhunter because of Silence of the Lambs, but Farina’s great in it as the old-school fed struggling to follow Petersen’s near-psychic deductive leaps.

Note from an Avid Fan

Mann had left Miami Vice to shoot Manhunter. During filming he started talking to Farina about playing the lead in his next TV project, a period drama called Crime Story. The show premiered in 1986, with Farina as Lieutenant Mike Torello, a weary, hard-nosed cop obsessively chasing the mobster Ray Luca (Anthony Denison) through a simulacrum of early-’60s Chicago that had the same sick, dreamy neon glow as Mann’s Miami. Farina didn’t look much like a traditional leading man, but the show turned him into one, at least briefly; every episode opened with him strolling the darkened streets in his overcoat like James Dean in Times Square, smoking meditatively.

The show didn’t find much of an audience at the time. It got clobbered in the Tuesday-night ratings by Moonlighting, and NBC came close to axing it after two seasons. But its long-arc serialized storytelling feels strikingly contemporary today, as does the attention it pays to the home lives of its dogged crime fighters. Torello’s marriage hits the rocks before the first season is half over; at one point he comes home to find another guy waiting on the couch to squire his wife around town. “You can go on dates with my wife, you can sit on my sofa, but you cannot watch my TV,” he tells the guy before storming out with the set under his arm. Al Pacino gives almost the exact same speech in Heat a decade or so later, but Farina’s version (nowhere to be found on YouTube, tragically) is less histrionic and maybe even sadder — a cop reclaiming one piece of his life from encroaching chaos.

Was Farina investing these characters with lived experience from his time on the force? When he played hoods, was he drawing on some understanding of the criminal mind that he’d picked up on the street? He never encouraged that interpretation. He was acting. “One interviewer asked me how many people I had to kill when I was a cop,” he lamented, over beers with a Chicago Tribune reporter in 1988. “Can’t anybody understand that that life is over?”

As it happens, Farina was such a notoriously bad shot in the old days that they called him the “Great Wounder” around the precinct. Years later, when he was caught trying to board an airplane at LAX with a loaded, unregistered .22-caliber handgun in his carry-on bag, the arresting officers would rib him about this. Whether he’d actually killed anyone isn’t important. Authenticity in filmmaking is a kind of superstition; it makes a difference except when it doesn’t. What matters more is psychological baggage. You could somehow see, even if you didn’t know, that Farina had at one point lived a life that didn’t involve craft-service tables or air-conditioned makeup trailers. His past registered onscreen, giving him a kind of weight even in parts that weren’t written with much dimension.

There are other ways to come by that weight, of course. You can just make it up, for example. The best male actor of this generation is a former Mouseketeer who talks like a Bowery Boy despite having been homeschooled in his native Canada. We’ll never stop making movies about cops and hard cases and other blue-collar types, but as guys Farina’s age begin to pass on, we’re maybe seeing the end of the era in which those roles were played by actors with a real connection to that milieu. It’s worth noting that Farina’s also the only name actor in Saving Private Ryan who had actually served in the Army. Not that that necessarily matters, except when it does.

Farina could glower like a bull in the chute when a part called for it, and sometimes even when it didn’t. At the end of this priceless public service announcement, we’re supposed to believe he’s going inside to call a child-protection hotline and report the paperboy’s mom’s boyfriend, but because it’s Farina, it’s hard not to think that he’s going to take care of the problem personally.

But he could be oddly gentle, too. There was a tenderness to the way he sat up with Dustin Hoffman every night on HBO’s late, lamented Luck, even if he did dish out a savage restroom beating in what turned out to be that show’s final episode. And he was funny. He’s an acid fountain spewing colorful invective as the mob boss in Martin Brest’s Midnight Run. And Guy Ritchie has never gotten a comic performance out of anyone that beats the one he got from Farina as Cousin Avi in Snatch. “Do you have anything to declare?,” a customs agent asks him as he’s returning to the States from a disastrous trip to London. “Yeah,” Avi snarls. “Don’t go to England.”

He was a master of the f-word. Dennis Farina being handed profanity-laden dialogue to deliver was Steve Nash at the free throw line, Keith Richards on open-G rhythm guitar. Go watch him in Get Shorty, as the Florida wiseguy Ray “Bones” Barboni, arguing with John Travolta about the definition of “e.g.” (“Bullshit it’s short for ‘ergo'”) or laying into a limo driver who’s woefully overestimated Ray’s interest in the natural wonders of Los Angeles:

RAY: I’m from Miami-fuckin’-Beach, and you want to show me the fuckin’ ocean.

LIMO DRIVER: They say the smog is the reason we have such beautiful sunsets.

RAY: That’s what they say, huh? What a bunch of fuckin’ bullshit.

You could argue that he spent his career being benignly typecast, playing endless variations of the same two or three guys. But over time, the parts started to bend to suit him. Director Joe Maggio changed the setting of his 2011 indie drama, The Last Rites of Joe May, from Brooklyn to Chicago once Farina agreed to play the lead, an aging con man. (The movie’s fine; he’s great.) In the mid-’00s, when he joined the cast of Law & Order as Detective Joe Fontana, he was already living part-time in Scottsdale, so the writers made the character a Mercedes-driving dandy with a vain streak in order to explain away Farina’s deep golf-course tan. Better that than denying a retired cop his right to enjoy the sunshine.