The Year in Simmons 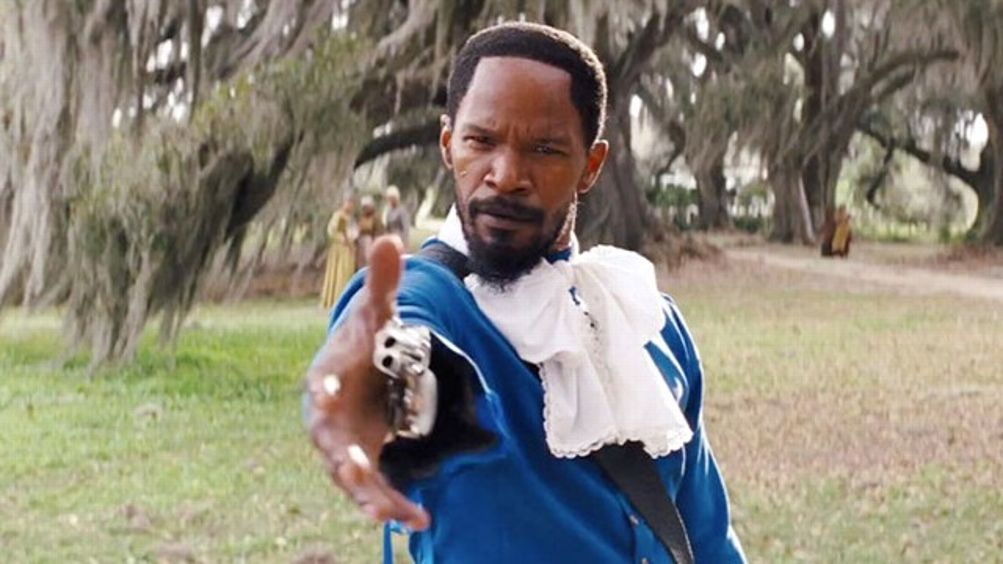 Quentin Tarantino long ago arrived at that point where the first question about his new movie will always be about how it relates to his old ones. He knows this better than anyone — it’s why he talks constantly about retiring, and about legacy, and about the proverbial kid who discovers one of his movies without knowing anything about the man who made it. That next, randomly chosen Tarantino movie that kid watches, Tarantino always says, can’t be the one Tarantino made to pay for his swimming pool or because he was 65 and past it and didn’t know any better. You get the sense he’s fond of Death Proof but that at the same time the existence of that movie keeps him up at night. “I don’t ever want to make anything lesser than that,” he told the New York Times this week.

It’s very much in character for Tarantino to relate to his filmography this way — which is to say, like a fan. He can still access the moviegoer in him who doesn’t know everything yet. Now that he does, he is acutely aware of how closely failure stalks even the really talented directors, and this in turn has helped keep him in their ranks.

Anyway, I’ve seen Django Unchained only once, which is barely at all compared to the amount of times I and everyone else have seen and reevaluated and argued over all the other ones, but here goes. Where does Django rank? It’s slacker, less tightly wound, slightly less total than Inglourious Basterds; I’d put it right on that Kill Bill tier, maybe a little bit above. It’s a similar movie in a lot of ways: also a revenge fantasy, driven by sundered love. In the same way that Kill Bill was an extended homage to Hong Kong martial-arts films and rape-revenge flicks and lost afternoons at seedy midday matinees, Django is Tarantino’s full-on spaghetti Western — a “Southern,” he calls it — right down to the Corbucci-checking title and the manic zooms and the operatic score, which mashes up James Brown with 2Pac and Rick Ross with Ennio Morricone and rides out at length to the chill mustache rock of Jim Croce’s “I Got a Name.”

You’ll be familiar with the basic plot by now. It’s 1858, “somewhere in Texas,” a little more than two years before the Civil War. Jamie Foxx plays a slave, Django, who is freed and then schooled in the ways of bounty-hunting by Christoph Waltz’s Dr. King — yes, Dr. King — Schultz, a gentleman German dentist with a very particular set of skills, few of which relate to actual dentistry. Kerry Washington plays Django’s wife, Broomhilda, who is sold to Leonardo DiCaprio’s Satan-bearded Calvin Candie. Schultz and Django, after they spend some time getting Django up to full killing speed, decide to pose as a pair of slavers themselves in order to buy Broomhilda back.

It’s romantic in that way, like Jackie Brown or the second Kill Bill. It’s also the most linear movie Tarantino has ever made. His source material is typically diffuse — Corbucci’s The Great Silence, Hercules Unchained, Mandingo, Sergio Leone — but the main myth he’s playing with is uncommonly straightforward. Like the Siegfried of German legend, Django must scale proverbial mountains, slay dragons, and walk through hellfire in order to recover his bride, so that together they may once again salute, as Wagner once put it, “light-bringing love, and laughing death.”

In one early scene, Schultz relates the story of Siegfried to his new partner as the two of them sit around a campfire — Siegfried endured these things because the woman he loved was worth it. Django listens intently, then nods.

Django is about slavery. It’s about heedlessly cruel slave owners and abject slaves, bigoted white people and a Southern economy dependent on forced labor. It’s about the violence of that economy, and the pervasiveness of it — the way that, for instance, Django can’t do much of anything, including simply riding a horse alongside Schultz, without provoking paroxysms of white rage. And though there is much that is anachronistic about the film, Tarantino does not shy away from his setting — there are proto-Klansmen in (amusingly ill-fitting) hoods, all manner of brutality visited upon black actors in chains, merciless and unceasing use of the obvious racial epithet. And so, like Zero Dark Thirty or Tarantino’s own Inglourious Basterds, Django is already being accused of being insufficiently horrified by what it depicts, as if that were the first job of screenwriters and directors, to make clear their distaste for what is distasteful.

But it’s worth noting that in many ways the central quality of the film is the way in which it weds humor to the basic humorless fact of slavery, redemptive violence to the kind of violence that cannot be redeemed. Django has dozens of great jokes in it and you can rely on critics not to spoil them, because only Tarantino would choose to write any of them down on paper. Well, OK: “Kill white folks and they pay you for it? What’s not to like?” That one’s in the trailer, and it already drove Matt Drudge into full race-war meltdown, especially after Foxx repeated a version of it in a recent Saturday Night Live monologue. This joke is also the movie’s most basic line of defense against critics, because it signals where the movie’s sympathies seem to lie — i.e., not with the oppressors but the oppressed.

But Django is a more sophisticated movie than that. It deliberately leads your sympathies to uncomfortable places. Because while you may or may not be laughing with or rooting for DiCaprio’s homicidal charmer Candie, who has slaves ripped apart by dogs for fun and is the greatest and most enthusiastic proponent of mandingo fighting upon the land, you are definitely laughing with, and rooting for, Foxx’s Django, who for the sake of his wife eventually acts the part of a slaver more vicious and heartless than any of his white contemporaries. How morally acceptable is it to laugh along with him or cheer when Django tells a group of slaves, “I’m worse than any of these white men here”? And how comfortable are you with your own white privilege, if that applies, or the white person sitting next to you in the theater, laughing his head off, if that applies, or the fact that this was all written by a white man whose relationship with black culture has always been somewhere between respectfully adulatory and borderline exploitative?

Like every other Tarantino film, Django aestheticizes violence to an almost comical degree. A running joke of sorts has red blood spattering over various white surfaces — snow, gauzy cotton, a horse’s pale back. But Django is also unstinting in showing the full unromantic cruelty inherent to the era: Slaves are locked in boxes, forced to fight to the death, branded, and humiliated. The ugly fact of it all is onscreen and unmistakable. This is not a movie that takes slavery lightly. Although it could certainly be accused of taking the murder of white slavers lightly.

That is not something that much bothers me.

It’s an interesting litmus test, maybe even a big part of the film’s artistic achievement — like a Jay-Z show during the moment when thousands of people yell the word they’re not supposed to yell. If there was awkwardness at my screening, it was audience-supplied. But only you can know the precise degree of evil white glee in your evil white laugh.

Broomhilda’s last name, by the way, is von Shaft; there is a none-too-subtle suggestion that she and Django are forebears to the Shaft, and so the narrative of revenge that begins in Texas just before the Civil War in a way continues for another hundred years plus, ending, as things often do for Tarantino, in a movie theater sometime in the 1970s. Django is a more mature movie in this way — all the usual Tarantino signatures are here, but they feel more purposeful than usual, more integral to the plot. Django, once freed to dress as he likes, dons a brilliant blue suit with white lace at his neck and blue bows at his knees — it is the costume of an 8-year-old boy playing lord, and Django doesn’t know that, and so it’s a characteristically tremendous visual gag and also deeply sad. “You mean you want to dress like that?” a fellow slave asks.

If there was awkwardness at my screening, it was audience-supplied. But only you can know the precise degree of evil white glee in your evil white laugh.

The first half of the movie is lighthearted, mostly. For a while it’s almost a buddy comedy. Schultz is a close cousin and yet the moral obverse to Waltz’s character in Inglourious Basterds — enamored with the sound of his own voice, friendly but murderous, resplendent in a giant silver mink coat. Foxx, as Django, gradually becomes more charismatic as the movie goes on; by the time he swaggers onto Candie’s Candyland plantation, it is to the sound of this, and it is everything you would ever want from a Tarantino movie. Once at Candyland, the movie darkens considerably, and also goes on for a while — there’s at least once false ending, maybe two.

In between, there are the expected cameos from semi-mothballed actors: Don Johnson, in a comically vain turn as a plantation owner and ineffective Klan leader; Bruce Dern; Tom Wopat; Tarantino himself, playing a doughy and dim-witted Australian slaver. But, somewhat unusual for a Tarantino film, the real star performances here come from stars. Samuel L. Jackson, as a gnarled house slave who is probably the most hate-filled and complexly realized character in the entire movie; DiCaprio, playing against type as Calvin Candie, sipping weird and pretentious drinks out of coconuts, lustily eying his own sister, turning his own considerable charisma into something darker and more self-aggrandizing. There is an ease and mischief to his performance here that makes you realize how tightly wound DiCaprio has otherwise become as an actor.

The film has the weird quality of being among both the most funny and the most serious of all Tarantino’s films. It’s about cinema, like all the other ones, but it’s also very much about justice and moral corruption and America’s original sin. When the German Schultz turns away from the graphic punishment of a slave, Django looks on, unblinking. “I’m just a little more used to Americans than he is,” he tells Candie. The anger is real. Some have suggested that Django is a kind of prelude to Inglourious Basterds, another act of winking historical revisionism and symbolism. But without giving anything further away, not much has changed by the end of Django — this movie is not about the end of slavery. But it is an indictment, a peculiar new application of Tarantino’s unparalleled technique, his humor, his blood-spattered mind: horror for horror.