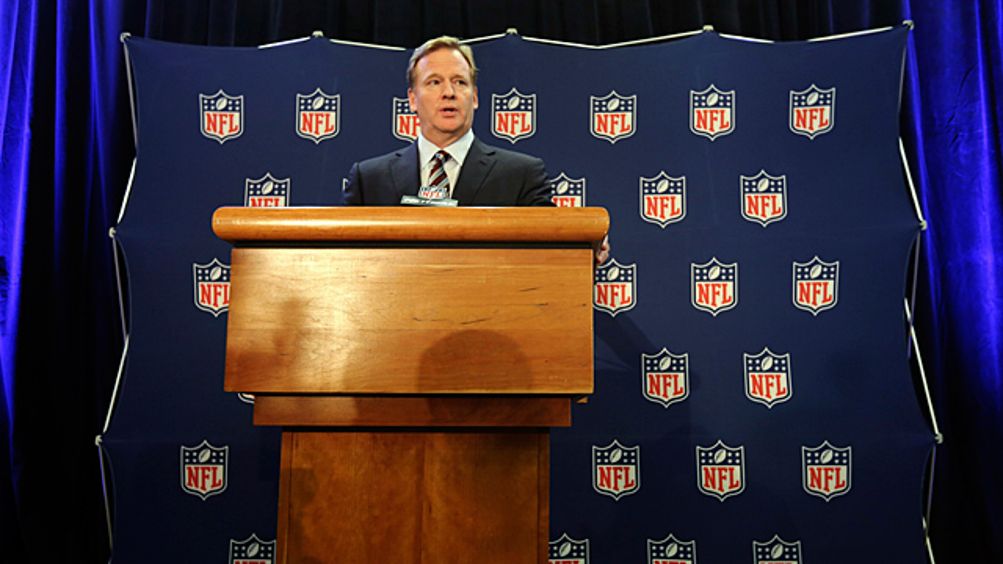 So it was this week, when I decided that Paul Tagliabue was probably more right in the case of the New Orleans Saints bounty program than was Roger Goodell. Tagliabue was brought in to deal with the appeals from the New Orleans players of their suspensions by Goodell, and, also, to head off at least some of the resultant lawsuits. In every way, Tagliabue was the preposterous. He was a former NFL commissioner being tasked with judging the actions of his successor. More to the point, he was a former NFL commissioner being asked to judge those actions by the standards of substantive due process, a concept heretofore as foreign to all NFL commissioners as quantum physics. Goodell was the authoritarian, a figure with whom it is impossible to sympathize, and whose actions would have been a legal embarrassment to North Korea. At the very least, what Tagilabue did was funny.

First, he fairly well justified the Nuremberg defense within the NFL. Tagliabue affirmed that a bounty program did exist in New Orleans. He also affirmed that Jonathan Vilma, Anthony Hargrove, and Will Smith were part of it, and that there wasn’t enough evidence to conclude that Vilma hadn’t once offered a $10,000 bounty on Brett Favre. In short, Tagilabue confirmed there was a culture of systematized extracurricular violence within the Saints during the time in question.

However, he also argued that Goodell’s punishment of the players was overly harsh, and beyond the scope of the commissioner’s authority, because of a pattern of “broad organizational misconduct,” [PDF] and because the players were acting out of this pattern at the behest of their coaches, who, Tagliabue said, thereafter “led a deliberate, unprecedented and effective effort to obstruct the NFL’s investigation.” According to Tagliabue, then, the Saints ran a bounty program and covered it up, but the players should not have been judged as harshly as they were because they were, you know, just following orders.

Further, Tagliabue emphasized that Goodell had done the right things the wrong way and that, as an investigator, Goodell pretty much makes Torquemada look like the chairman of your local ACLU. By vacating the suspensions levied by Goodell, Tagliabue may have defused a number of the inevitable lawsuits, and created a kind of détente with the NFL Players Association. (The NFLPA might well have settled for any finding that just made Goodell look ridiculous, which Tagliabue certainly did.) It is devoutly to be hoped that Vilma, whose lawyer may never stop crowing from the rooftops, goes ahead with his defamation suit against Goodell, because the discovery process alone in that one would be surreal.

There’s no question that Goodell got a good and proper hiding in Tagliabue’s report. In that, the report itself is completely unprecedented. And that is what makes what Tagliabue did preposterous, and therefore, very entertaining. Somewhere in his heart of hearts, every commissioner in the history of professional sports has thought that his power ought to be absolute. Of course, the smartest ones realize that they are hired to be fired by the various plutocrats and mountebanks who own the teams, but they believe that their power over the hired help should be completely untrammeled. Goodell clearly feels this way. And I would guarantee you that Tagliabue felt that way when he was commissioner, too.

And what is even more preposterous is that, in an age in which the NFL’s concern for the well-being of its players increases proportionally with the speed of the mother of all class-action suits that’s headed down the track straight at it, a lot of the cheering for what Tagliabue did is coming from the people who believe that same concern to be demolishing the exquisitely violent culture of the game they love. Make no mistake. A great deal of the criticism aimed at Goodell is directed at him by the why-don’t-they-wear-dresses crowd, an odd conglomeration of talk-radio brawlers and Internet tough guys whose vicarious lives have far too many rats running through them.

What Goodell did to those players was unconscionable, but very typical of the way commissioners act when nobody’s watching. (It’s also the way bosses behave in almost every American workplace these days, and in places where people don’t have Paul Tagliabue to go their bond for them.) The one thing I will not put up with is this notion that the various Saints in question — and I exempt Scott Fujita, who apparently really did get screwed, from all of this — are martyrs to union solidarity and the rights of due process. I admire not a single one of them, and this is why.

The Saints went out of their way to damage their fellow players for what amounts to tip money for most of them, and they did it in a perfect demonstration of the savagery that produced the current moral crisis in the NFL in the first place. And far too many people think Tagliabue’s criticism of Goodell’s authoritarian style justifies this plunge into a moral abyss, because that’s the way things always have been done in the NFL, where men are men and a lot of them don’t remember their names when they’re 50. For this group of fans, the important thing to remember is that Goodell’s power is broken, and not that Brett Favre’s body was. As far as I’m concerned — no matter how glad I am that his rights are now safeguarded — Jonathan Vilma can go pound sand.

The NFL still has so very far to go. It has to disenthrall itself from the fundamental dynamic that drives the devotion of its most fervent fans, who invest in it their frustrations and their truncated manhood, and the rest of the resentment that builds up all week and demands a blood sacrifice for catharsis every Sunday. It has to excise from itself the notion that it is something like a war, and get back to the notion that it is every bit like a game. It has to stop making excuses for its excesses, the way that Paul Tagliabue did in his report. It’s not about “broad organizational misconduct.” It’s about the encouragement of human destruction for private profit, from the owner’s box right down to the locker room. To say, as Tagliabue did, that the suspension of those players should be vacated because similar offenses in the past have gone unpunished is to rather miss the point of what’s been going on within the culture of the league for the past couple of years. And to argue, as the report does, that, “rightly or wrongly, a sharp change in sanctions or discipline can often be seen as arbitrary and as an impediment rather than an instrument of change,” makes Tagliabue sound like all those backwoods police chiefs complaining about the shackles that the Miranda decision slapped on them. The change has to start somewhere, with somebody.

I have no doubt that Tagliabue acted judiciously. By all accounts, his investigation of Goodell’s conduct was far more professional than was the one Goodell conducted of what went on in New Orleans. I suspect that Goodell will be chastened in the exercise of his office, and that’s all to the good, since he should not be trusted with absolute power for the same reason you do not trust your toddler with a hand grenade. But the simple fact remains that what went on in New Orleans still went on in New Orleans, and it is still an offense against the game, against the men who play it, and against basic human decency. What Tagliabue did was anything but a whitewash, but to the people who are clinging pathetically to whatever it is the NFL does to satisfy whatever it is in their souls they so desperately need to satisfy, it serves the same purpose within their withered consciences. And that is why I always side with the preposterous over the authoritarian. At the end of things, it’s the preposterous that is the most perfectly human thing of all.