The Face of the Watch 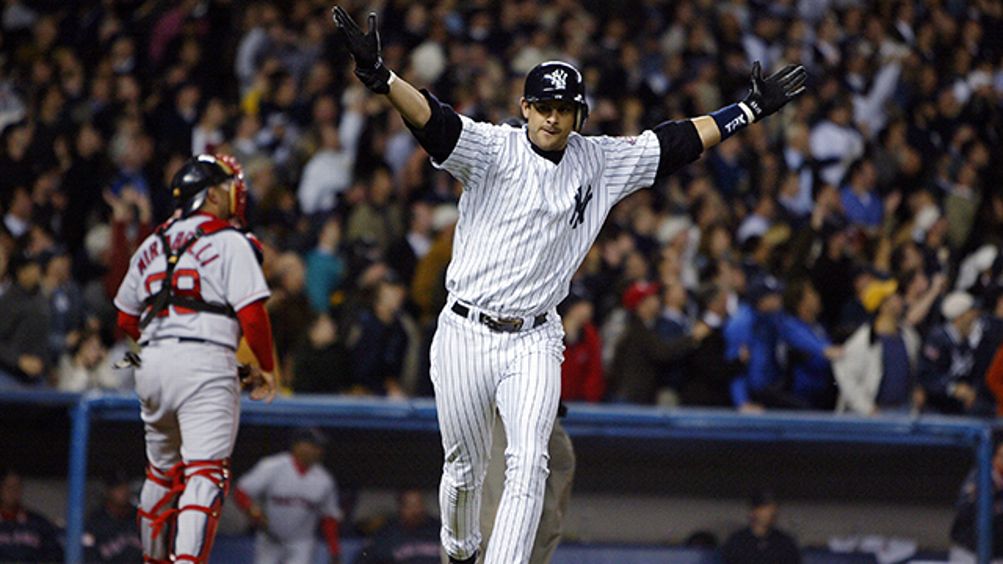 Editor’s note: This column originally ran on October 17, 2003 — the day after the Red Sox lost to the Yankees in the 11th inning of Game 7 of the ALCS.

Twenty minutes after the Yankees eliminated the Sox, I called my father to make sure he was still alive.

And that’s not even a joke. I wanted to make sure Dad wasn’t dead. That’s what it feels like to be a Red Sox fan. You make phone calls thinking to yourself, “Hopefully, my Dad picks up, because there’s at least a 5-percent chance that the Red Sox just killed him.”

Well, he picked up. And we talked it through. We always do. Dad’s voice was barely audible. He sounded like he just got out of surgery. Like every other Sox fan on the planet, he couldn’t understand one simple question: Why didn’t Grady take out Pedro? In the eighth inning, Pedro was running on fumes. Everyone knew it. Everyone but Grady Little.

Little did we know, our overmatched manager was saving his worst for last.

So it happened again. Nothing was worse than Game Six against the Mets, but this was damned close. I don’t need to tell you why. If the Red Sox were a girl, you would probably just break up with them. You would call them on the phone, explain to them calmly that you can’t take it anymore, let them down as gently as possible, then move on with your life. But sports aren’t like that. You’re stuck with your teams from childhood. It’s like being trapped in a bad marriage. You can’t get out.

Hey, this is my team. I came to grips with that a long time ago. They’re part of my life. Sometimes they lift me to a higher place. Sometimes they punch me in the stomach and leave me for dead. There’s no rhyme or reason. And there are thousands and thousands of diehards just like me, all trapped in that same bad marriage, united by our experiences and memories. We wear Sox caps, we pack Fenway Park, we travel insane distances to support our team on the road. We always have each other. And some days are better than others.

This was one of the bad days. Given that the f**king Yankees were involved, and the way things unfolded, it may have tied for the worst.

I can’t say this strongly enough: I will spend the rest of my life wondering why Grady let Pedro wilt to death in the eighth inning. This isn’t Pantheon Pedro anymore; honestly, it’s been over two years since he was doing his Mozart routine on the mound. Even if his best start is still better than just about anyone else’s best start, asking him to throw 125-plus pitches over three-plus hours in Yankee Stadium — in the most improbable, nerve-wracking setting imaginable — was indefensible at best and catastrophically moronic at worst.

Unlike the other devastating losses over the years, you couldn’t blame any of the Sox players for losing the series this time around (no, not even Nomar). This was a great group of guys — a resilient, likable team that almost always came through, just like they proved in Game Six. Every time you counted them out, they came roaring back. I loved that about them. Unfortunately, they couldn’t manage themselves. Switch Grady Little and Joe Torre and the Red Sox win the series. The two teams were that close. 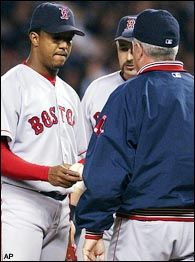 I would rehash the eighth for you, but frankly, I’m not in the mood. Nobody in his right mind would have allowed Pedro — 115 pitches on the odometer, struggling heroically with a three-run lead, running on the fumes of his fumes — to pitch to Hideki Matsui. Not with flame-throwing Alan Embree waiting in the bullpen. This isn’t even a debate. And the ensuing disaster — Matsui’s ground-rule double, followed by Posada’s bloop single to tie the game — wasn’t just predictable, it was downright sickening. It was ’86 all over again. Aaron Boone’s homer in the 11th wasn’t just inevitable, it was practically preordained.

Of course, the TV networks and newspapers got what they wanted: They spent the entire month gleefully rehashing those same “Curse” stories for both the Cubs and Sox, flashing graphics like “RED SOX WORLD SERIES WINS AFTER 1918: 0” and showing so many Babe Ruth pictures, you would have thought John Henry Williams had brought the Babe back to life. It was borderline pathological. Fox even made Boone’s brother a guest announcer for the Sox-Yanks series — apparently, Plan B was one of George Steinbrenner’s kids. Well, here’s your reward, guys: A Yankees-Marlins series that absolutely nobody will watch. Well done.

It was a little more simple for the 2003 Red Sox. They fell short because of their crappy manager, to the surprise of absolutely no one who followed the team on a regular basis. I’m sure he’s a nice man, and I’m sure everyone likes him … but when it comes right down to it, you don’t want Grady Little managing your team in the “Biggest Non-World Series Game Of All-Time.” I could give you about 150 Grady examples from the last two weeks — including him breaking the major-league record for “Consecutive games with a failed hit-and-run that resulted in a double play” — but that would be a waste of everyone’s time. This man would hit on 19 at a blackjack table because “he had a feeling.” That’s all you need to know.

As for me, I feel like Andrew Golota just spent the last two weeks punching me in the gonads. The A’s series sucked up 90 percent of the residual emotion in my body — it was like enduring a four-hour breakup with somebody, then deciding to get back together in the end. The Debacle That Was Game Three — Pedro acting like a baby and throwing at Garcia, Manny overreacting because Clemens threw a fastball within four feet of his head, Zimmer and Pedro re-enacting the Clubber-Mickey fight in “Rocky 3” — took care of the rest of my emotions. For the past few days, I was walking around with one of those weird, Daryl Hannah-like half-smiles on my face, like the lights were on and nobody was home. I was tapped.

Like I wrote last week, the baseball playoffs can do that to you. My friend JackO (a Yankee fan) called me on Thursday to say, “No matter what happens, I’m a carcass right now.” That’s the perfect word. Carcass. Of course, he doesn’t feel that way anymore, the bastard. His team came through. Mine failed. Again. You know it’s a bad loss when one of your friends is saying, “I just spent the last 15 minutes reflecting on everything that’s good about my life, and I guess I just have to keep doing that for the next couple of days to get through this” (actual quote from my buddy Hench). 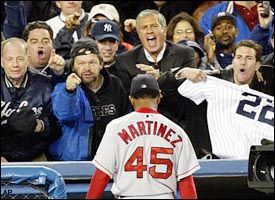 And I’m sure this game will be a staple on ESPN Classic, and that it will definitely cost Grady Little his job — thank God — but honestly, the last two weeks took something out of me. You spend six months following a team, you devote something like 1,000 hours of your year to watching-reading-discussing them, and then everything vanishes in thin air. And you feel like a moron for devoting so much of your time to something so, so, so … (I can’t even think of the right word).

Only one thing still bothers me. As a Sox fan, I take great pride in ignoring the past, thinking positively and blindly believing that “This is the year” under any and all circumstances. I don’t believe in the Curse. At least, I think I don’t. With that said, I watched the first 10 innings at my office last night, surrounded by a support system of friends from work. When the clock turned midnight on the East Coast, I noticed the “NY 5, Boston 5” score …

And I started thinking about it …

(Haven’t I been down this road before?) …

And I finally made the connection.

And it weakened my knees like Kerry Wood’s curveball.

It was like seeing the Ghost of Eighty-Six. Suddenly, I knew they were going to lose. I grabbed my stuff and quickly bolted out of there, looking like a guy grabbing his clothes after a bad one-night stand. My friends were in disbelief — it was like Montecore the Tiger was dragging me off the stage. I couldn’t possibly explain it to them. Ten minutes later, I walked through my front door, sat down next to the Sports Gal — who was dutifully watching the entire game on the sofa — then watched Aaron Boone crush that Wakefield knuckler into the stands.

I had been home for about 45 seconds. No lie.

Looking back, I can’t say I was surprised … just like Cubs fans can’t say they were surprised when the wheels came off after Gonzalez’s error. As a sports fan, sometimes you know when bad things are about to happen. You recognize the depressing signs because you’ve been there before. So maybe that’s the real “curse,” those moments when you turn into Haley Joel Osment in the Sixth Sense … only you aren’t seeing dead people, you’re seeing a dead ballgame. And when it’s happening to thousands of fans all at once, the resulting collective karma kills your team. 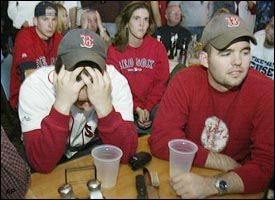 (Does any of this make sense? Of course not. I’m completely insane. The Red Sox have driven me insane. It’s official.)

Anyway, my wife understands now. She only jumped on the bandwagon a few years ago, thanks to me. Now her Sox virginity has been taken; she was near tears last night. “I finally understand why you’re so crazy about this team,” she kept saying. “I can’t imagine going through this for my entire life. This is horrible.” Add another one to the list.

As for my Dad, he’s still alive. When we were hanging up last night — right after we finished rehashing Grady Little’s mistakes — I mentioned how I had to stay up late to write a column.

“You have to write something tonight?” my father said, incredulous. “Damn. I’m going to bed.”

“You can go to sleep right now?” I asked.

“Of course not. I’m just too depressed to do anything else.”

That’s my Dad. He’s 55 years old. I hope he gets to see the Red Sox win a World Series some day.