Jay Electronica and the Rothschild Affair 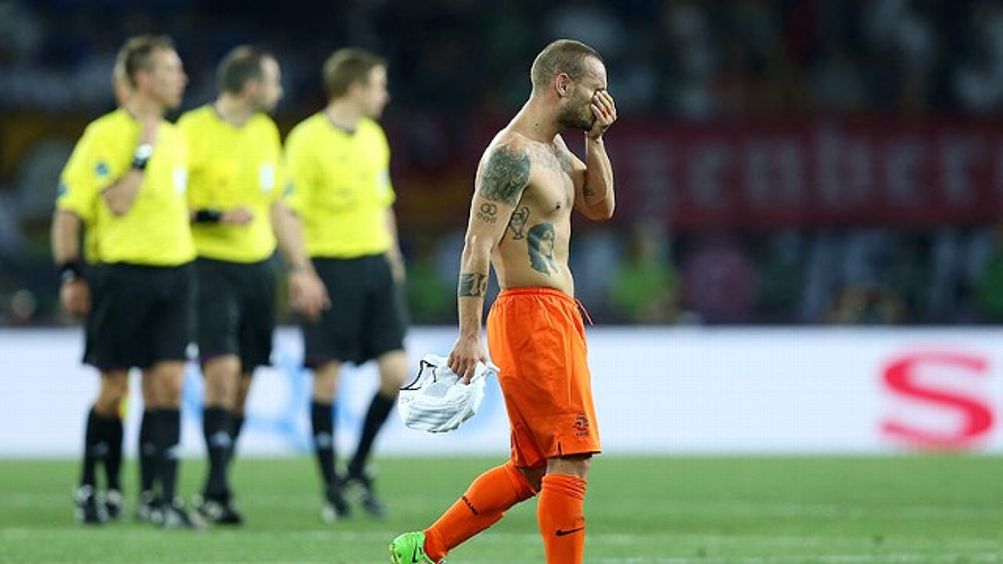 Game of the Week: Germany 2, Holland 1

When the final whistle blew on this Group of B (B is for Death) match, one image in particular kept running through my head. There was Arjen Robben and his crinkled, baby Benjamin Button face, dickishly taking the long way around to the Dutch bench after being substituted for in the 83rd minute. He didn’t try to hype up his teammates, he didn’t shake hands with his sub, Dirk Kuyt, or give a quick man-shake to his manager. Nope, instead he tore off his jersey, parading past the famously passionate, good-traveling Holland fans, looking like a kid who’d just been Tasered while sucking on a lime.

Anyone who has ever had the impulse to throw their laptop through the wall, light a canvas on fire, hit erase on some piece of recorded art, or simply make everyone else around them as miserable as they are, knows exactly how Robben feels. They may not have pulled that act in front of millions of people and they may have more forgiving hairlines than the Bayern Munich winger, but they know. Nothing went right for him on Wednesday night. He knew it, his teammates knew it, and his manager knew it. And because of that he threw a tantrum. I don’t subscribe to many myths, but I frequently renew my belief in the idea that with creativity comes the inclination to be destructive.

In a way, you can’t blame Robben. He is an artist. I hate his work, but it definitely belongs in a gallery: His little space creating step-overs, arms out, running like he’s tap dancing to drum and bass; his always-expected but nevertheless effective cut in from the flank; and that lethal long-range shot. But then, nobody ever really blames artists; it’s one of the only jobs where being a fucking baby isn’t just expected, it’s often appreciated. The thing is, you can’t have a football team full of them. For a side to win, especially a national team with limited amounts of training time, there has to be a predetermined balance between artists and engineers.

Apparently this idea was lost on Holland manager Bert van Marwijk, because he only brought the former and none of the latter. Oh, he brought some gargoyles with him — his son-in-law Mark Van Bommel and Xabi Alonso’s old internist Nigel De Jong — but he didn’t bring any engineers, and the Dutch will likely exit Euro 2012 because of it.

Starting for the Dutch on Wednesday were Robin Van Persie, Wesley Sneijder, Robben, and Ibrahim Afellay. On paper it makes a kind of sense. Play RVP up top, Sneijder behind him, and have your wings a little off-kilter with Afellay moving in and Robben hugging the touchline, switching flanks when needed. The problem with this is none of these guys particularly relish defending and, with the exception of Afellay, all enjoy being the focal point of their club sides’ attack. I don’t speak Dutch, but I can pretty assuredly tell you that when Robben would take a dozen or so too many dribbles and fire a shot into the Ukrainian night, Van Persie and Sneijder were not shouting, “Good job! Good effort!” Robben didn’t care. The artist was at work.

I feel bad for Germany because Holland was so off that it’s difficult to tell how good they were. But give them tons of credit. You could say the Germans won by dominating the parts of the field that the Dutch left most vulnerable. When van Marwijk wrote teenager Jetro Willems’s name on the team sheet, he might as well have hung it on a bull’s-eye, as the Germans oh-so-logically went after the inexperienced and not particularly impressive PSV Eindhoven defender. So simple was Mario Gomez’s 38th-minute second goal, which came largely at Willems’s expense, the Bayern striker barely bothered celebrating.

But really, the main thing the Germans did was out-Holland the Dutch in the most German way possible. Total Football, the philosophy developed by manager Rinus Michels and Johan Cruyff, has served as a template for Dutch football for the last several decades. It’s based on, to quote David Winner, author of the fantastic book Brilliant Orange, “flexible space.” It’s easy to sound like a Design Within Reach catalog when talking about Total Football, but if you want a good example just rewatch Germany’s performance against the Dutch.

It seemed like every time there was a pass, players were moving to receive the next one. If Thomas Müller picked the ball up on the wing, Jerome Boateng was breaking on an overlapping run past him and Sami Khedira was positioning himself as a safety valve somewhere deep. And there was Bastian Schweinsteiger moving up and Mesut Ozil moving back and Mario Gomez breaking toward the box. It was a collective act of artistry. It wasn’t like Kraftwerk; it was Bad Brains. They were locked in. Each player knew where the other was moving; each player knew when to break, when to cover. Everyone was working together collectively to create something.

Perhaps nobody appreciated this creativity more than the Dutch (though they’d never admit it). It certainly seemed that way. Sometimes Schweinsteiger was playing all on his own in midfield, moving the ball around at will as De Jong and Van Bommel chased shadows, making up for the lack of defending by Holland’s front four.

At the end, Sneijder tried to confront Ozil over something that must transpired over the match. The Real Madrid no. 10 walked away, looking pretty unbothered by it all. Sneijder had to be comforted by his teammate Rafael Van der Vaart and the German Müller. As he began to settle down, exchanging his jersey with Lukas Podolski, you could see him on the verge of crying. I’m sure it was because his team was on the edge of elimination from the tournament, but I’d like to think there was something else going on there. He had just seen something beautiful, something to aspire to. Maybe it moved him to tears.

• This was, in truth, the second-best game of the day. Grantland’s Ricardo Bernard predicted before the tournament began that Denmark could make some noise in the Group of Death, and so far they’ve made an unholy racket. They took out the Dutch, 1-0, in their first match and nearly sank Portugal, losing 3-2 on a late goal from Silvestre Varela.

• Cristiano Ronaldo is going to want to name his next child Silvestre Varela. I’ll accept Silvestre CR7 Varela, but he’s got very little wiggle room. How else could the second-best player in the world thank the Porto midfielder after he saved Ronaldo’s jamon iberico in such a big way? CR7 made LeBron look like Mariano Rivera with this fluff.

But Varela came through with an electric late-match volley to win it for Portugal.

• Even with two goals in Wednesday’s match, Nicklas Bendtner still came off like a goober. The striker, most recently a Sunderland player, on loan from Arsenal, pulled down his shorts just enough to show the logo of a gambling firm on his drawers. You could practically hear the blood vessels burst in Michel Platini’s face.

Four Things to Watch for Next Week

• Under 73-year-old Giovanni Trapattoni, Ireland are rather adept at parking the bus, throwing 10 men behind the ball, and soaking up pressure. Thursday afternoon they face Spain. Against Italy in their first match, Spain played Cesc Fábregas in a kind of false-9/non-striker-striker role. Will Vicente del Bosque elect to play Fernando Llorente as a focal point against the Irish? They can’t afford to draw a second straight group match if they want to defend their Euro crown.

• Can Andriy Shevchenko produce another folk-song worthy performance when Ukraine face France on Friday? And does he need to? Sitting at the top of Group D, Ukraine can draw out the rest of the way and have a good shot at advancing to the knockout stages.

• Will anyone actually want the ball during the Greece-Russia match? If you find the Greeks boring to watch, you’re going to be pull an Oedipus on Saturday (and I’m not talking about your mother). This could be eye-stabbingly dull, with the counterattacking Russia, always looking to dispossess the opposition and break, and the defensively well-drilled Greeks sitting deep.

• Does Germany rest their stars and ease up on the gas against Denmark Sunday? They’re almost through to the quarters and they’d just as soon not see teams as talented as Portugal and Holland (on the off, off chance they squeak in) advance. Joachim Low doesn’t seem like the tanking type, but don’t be shocked if you get a Marco Reus or Mario Götze sighting. In fact, be excited: They are the future of German football.