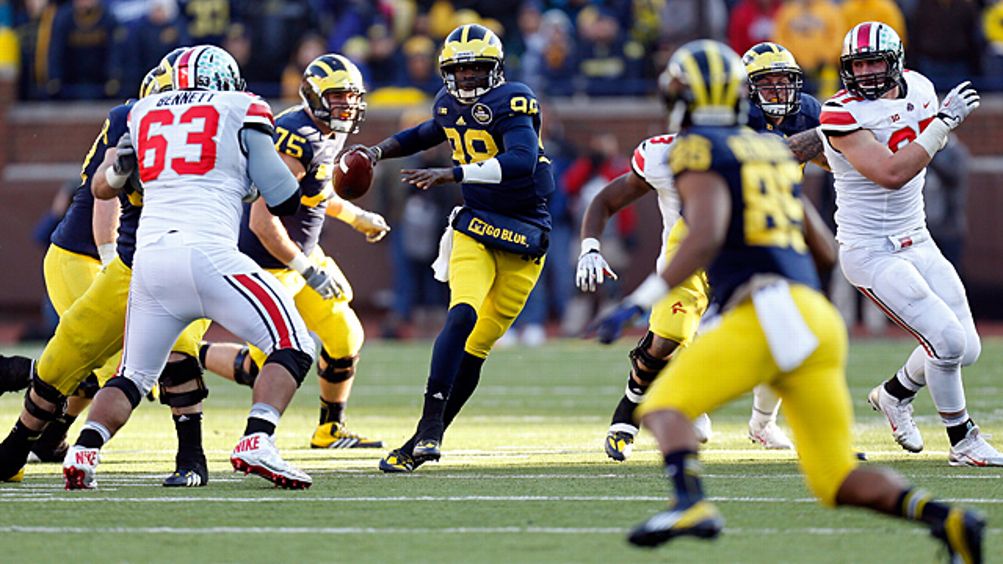 College football needs days like this more than it needs a playoff. And it damn sure needs Ohio State–Michigan more than it needs those god-awful conference championship games this coming Saturday. Those aren’t football games, they’re elaborate fund-raisers, ATMs with head trauma. Michigan played Ohio State to a standstill last weekend, however — down to the final half-minute — and it was only the second-best ending to the second-best college football game of the day. That brought great clarity to the sport — clarity that not even a national championship can bring. This game is still about life and love and memory more than it is about ratings, television checks, and a big Waterford Crystal football.

Conference championship games begin four days from now. The schedule narrows and the stakes elevate from here. But we can’t leave this weekend behind. Not just yet.

Suddenly, on Saturday afternoon, as the autumn haze burned away, there was no BCS. There were no delicate made-for-TV calculations. When and where and against whom undefeated Ohio State would be playing at the turn of the year became irrelevant within the confines of the Big House. (And may we now paraphrase the late football aficionado R.M. Nixon and point out that it is, indeed, a Big House.) Because of the way simple history can reassert itself, this game, this one right here in Ann Arbor, and later that one down in Jordan-Hare Stadium in Auburn, solved all of college football’s annual end-of-the-season conundrums. History solved all those conundrums by complicating them, and by providing the simplest answer of all to the question “Who’s no. 1?”

The answer: Who the rammer-jammer hell cares? Did you see those games?

(Let us pause briefly and honor a modern phenomenon in college football by borrowing a trope from the Landlord here and cite the Saban Face, which, as a friend of mine emailed shortly after the hysteria had subsided at Auburn, looks like the living rendition of the great George Carlin line — the look of a man realizing that an ax has gone through his head.)

In Michigan Stadium, the statistics were positively baroque. Michigan and Ohio State combined for 83 points and 1,129 total yards. Michigan quarterback Devin Gardner threw for 451 yards, which turned out to be only two fewer than he needed to win the game. Ohio State’s Carlos Hyde ran for 226 yards, and his quarterback, Braxton Miller, ran for 153, or one more than the entire Michigan team. It added up to something ludicrous, something gloriously excessive. It was what college football was supposed to be, before we handed it over to the bean counters and the computers. And, of course, it was just goofy enough to be remembered as unique even in this rivalry’s long, proud history of public invective.

Before we go into detail about the happenings at Saturday’s annual Rust Belt Battle of the Bands, we should pay homage to a legend a’borning, a legend that will be handed down through the generations as long as this fabled rivalry is played.

“Tell us again, grandfather, of the Day of the Double Bird.”

In the second quarter of what already had been a carnival of a first half, Michigan had just scored to take a 21-14 lead. Ohio State’s Dontre Wilson fielded the kick at his own goal line and ran it back 16 yards. However, deep in the pile, ill feelings mysteriously arose. Family relationships were disputed loudly. Within seconds, a WWE card broke out. Helmets flew, as did at least one punch. An exaltation of penalty flags took wing. By the time the game officials had finished approximating who had done what to whom, and whose mothers had been most grievously insulted, two Ohio State players and one Wolverine found themselves dismissed.

“I was disappointed in that,” Ohio State coach Urban Meyer grumped afterward.

(It is devoutly to be hoped that the Buckeyes followed the direction of their governor, John Kasich, regarding the letter “m” and remembered to call people “otherfuckers” in the scrum. These are the things I worry about.)

One of the expelled, offensive lineman Marcus Hall, was particularly exercised. He slammed down his helmet. He kicked what I can only hope was the bench. And then, as he was being led off into exile up the tunnel, Hall enthusiastically flipped off the Michigan crowd with both hands. This being Thanksgiving weekend, there were a lot of people out there watching with nothing in their hands save beer, and nothing on their hands but time. Within two minutes, Hall’s gesture had been GIF’ed approximately 9,678 times. This guaranteed him the kind of instant fame only the Internet can provide. It also guaranteed that Marcus Hall never will have to pay for a meal in Columbus for the rest of his life — whether he and the Buckeyes play for the national title or not. He demonstrated vividly that he don’t give a damn for the whole state of Michigan. I know I’m supposed to be outraged by this, but I can’t be. That would require me to be a TV drone and worry about things like The Image Of The Sport. Hell with that. Marcus Hall lived the dream of every Ohio State fan since the series began in 1897.

As Meyer said after the game, it was an instant classic, and in so many ways, too. 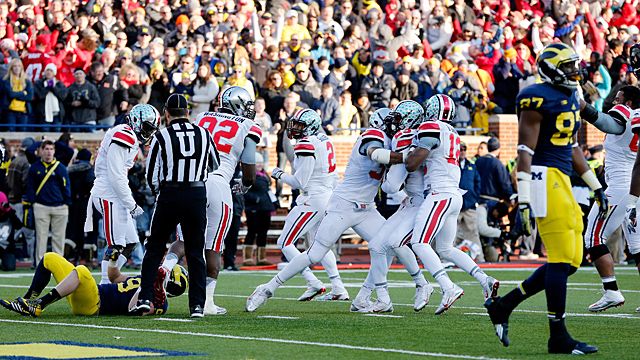 The 42-41 final wasn’t locked in until there were but 32 seconds left. All afternoon, Michigan had given itself a good puncher’s chance. But, with a minute remaining in the third quarter, its defense looked played out. Hyde, a considerable load at running back, ran the ball down to the Michigan 22. At this point, Miller dropped back and, having enough time to find a receiver on Craigslist, settled on tight end Jeff Heuerman. That put Ohio State up, 35-21. This is when championship teams put 7-4 teams away.

But Michigan came back with an 83-yard drive in 11 plays that ended with an 11-yard pass from Gardner to Drew Dileo. They tied it six minutes later, only to have Ohio State score again, using Hyde to punish the Michigan defense on three carries in five plays before finally, almost contemptuously busting over from the 1. Michigan started its last drive on its own 16-yard line with two minutes and 20 seconds left. It was a desperate, stumbling thing. Gardner got himself sacked with 50 seconds left on the Ohio State 40-yard line, but somehow scraped himself off the ground again and found the two most elegant names on the roster, Justice Hayes and Fitzgerald Toussaint, on consecutive passes to get Michigan down to the 2. With 32 seconds left, tight end Devin Funchess posted up in the left corner of the end zone and Gardner found him for the touchdown that brought Michigan to within a point.

It was at this moment that history — or something very much like it — came seriously into play. It had become Ohio State–Michigan. Period. Because of that, the decision for Wolverines coach Brady Hoke was an easy one. The only question this 7-4 Michigan team still had to resolve was its jersey color in a lower-tier bowl game somewhere. What they had left was a chance to beat Ohio State, and that is something that never changes. Do that, and your season is made, bowl game or no bowl game. Do that, and people talk about you along South Main Street in Ann Arbor forever. The Wolverines lined up for the two-point conversion.

“Ohio State’s head coach called timeout. We went over, and [Coach Hoke] asked us as seniors, ‘Do you want to go for it?’ and I don’t think there was one guy that said no,” said Michigan tackle Taylor Lewan. “Every single person said yes. We were behind the coaches 100 percent. We fight for them and our brothers.”

“We weren’t doing a good job slowing them down,” Hoke said. “We wanted to go win the football game.”

The decision was suited to the moment. The play call, alas, was not. All day long, Michigan had befuddled Ohio State with misdirection, especially on throwback screen passes across the formation. This time, though, it sent Dileo on a simple slant to the right side, and Buckeye nickelback Tyvis Powell, who knew exactly where the ball was going to go from his film study that week, dove in front of Gardner’s pass, picking it off a few inches off the ground, and there was all kinds of celebrating and swaggering that was a bit unsuited to the achievement of winning by a single point after giving up 41 to what is now a five-loss team.

“I was like, ‘Yeah, we watched that on film,'” Powell said. “Me and Josh Perry made a swap call. Josh ended up going on the blitz. He got the pressure on him, [Gardner] threw the ball, and I listened to [Buckeyes assistant coach Kerry Coombs] and, boom, there it was.”

“I threw an interception that cost us the win,” Gardner said. “That’s what I will remember.”

Too tough, young man. Much too tough on yourself. History will be kinder.