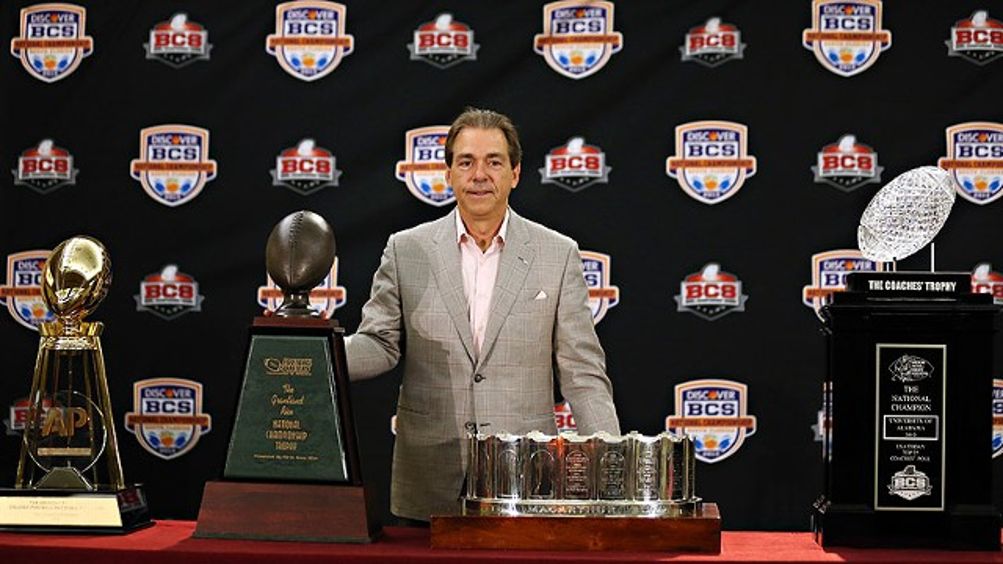 His given name, if you must know, is Ha’Sean Clinton-Dix, but his grandmother referred to him as “HaHa” when he was a child, and so the rest of us will forever do the same. There came a moment in the first half of last night’s BCS title game when HaHa began making tackles for the Alabama defense, and the public-address announcer in Miami intoned that name twice in a row — “HaHa Clinton-Dix” — and the fans on the Notre Dame side of Sun Life Stadium sank deeper into their $2,000 seats and suppressed a series of paroxysmal titters, as if this, too, might be some twisted element of the elaborate joke being perpetrated upon them.

By the time HaHa made a sprawling sideline interception in the third quarter, this contest was more of a Muntzian source of mockery on social media than an actual football game; it turned out that we were not in for a defensive struggle or a cautious back-and-forth between two programs with elite defenses or any of those hyper-optimistic prognoses forecasted by those of us who were really just hoping to shake up the status quo. It turned out that the status quo is the status quo for a reason. It turned out that this 42-14 Alabama win was straight-up over 177 seconds after it started, when Alabama scored its first touchdown on the first of several furious topspin corner-pocket bursts by tailback Eddie Lacy.

It turned out, in retrospect, that this whole damned shebang was decided back in December, when the regular-season standings shook loose and Notre Dame went 12-0 by the skin of its teeth and Georgia came up five yards short against Alabama in the SEC championship game and Oregon, the one team that might have at least forced Alabama out of its comfort zone, blew its chance in overtime on its home field. It turned out that we’d been deluding ourselves about Notre Dame’s defense, about their potential to win a game like this with an inexperienced quarterback and no real dynamic on offense, and about the Crimson Tide’s vulnerability to a team willing to go toe-to-toe with them on their own terms when they might just have the best offensive line in modern history.

It turned out, in case we had doubts, that Nick Saban really is just better at this straight-up no-gimmicks football thing than everyone else, that he has micromanaged himself into immortality — and that he is already, as I write this, preoccupying his mind with next season and the mental gymnastics required to assure his players that three national championships in four years doesn’t mean a damned thing come Wednesday. (I assume that the closest Nick Saban comes to laughing during football season is when he calls out HaHa Clinton-Dix for covering the wrong zone.)

And I accept that this is the landscape of college football as we veer toward the playoff era: an individual dynasty tucked neatly inside a regional dynasty, with no real expiration date in sight. It might be kind of funny if it didn’t feel so serious.

A moment, please, to celebrate Saban’s austere brilliance before we hypothesize ways to combat it: The other day, the coach told a story about his father that drove him to something resembling actual emotion. When he was 11, he said, he started working at his father’s service station in West Virginia, a full-service joint with a Dairy Queen attached to it; he cleaned windows, he checked oil, he gauged the tires, and he washed cars. He especially hated the blue and the black ones, because if his dad found a single streak, he’d make him start over again.

“That sort of perfectionist type of attitude that my parents instilled in me,” he said, “that’s probably still the foundation of the program we have right now.”

The shadow of Saban looms so large now that it is already shading into myth: There was a report, the day of the game, that Saban had ESPN removed from the televisions at the team hotel to avoid the chatter of the talking heads. I asked Alabama lineman Barrett Jones about this in the locker room afterward, and he assured me it was utterly false. But it certainly seemed plausible. It is, after all, Jones said, those small details that Saban notices that set him apart. “He’s full of little things,” he said.

This morning, in the conference room of the hotel where I’m staying, I went to a press conference where Saban, summoning a photograph smile, posed with four separate national championship trophies — and if ever there is proof of the laggardness of college football’s present system, it’s that we still need four separate trophies — and in the midst of it, someone asked Saban a simple question: Why? In other words, why keep doing this, and why keep striving, and why not pull a Spurrier and slip off to the golf course on some August afternoon during a two-a-days and delegate to one’s coaching staff? Like, why so uptight, man? And Saban sort of stared down the questioner for a second, and then he said this: “Why do you do what you do? Are you driven to be the best at what you do?”

And as Saban’s eyes bored into the deepest recesses of the reporter’s conscience, he replied, “Yes, sir.”

From there, Saban wound into a story that centered on an old Martin Luther King sermon about a shoeshine man who took pride in his work, and he said something about being the best street sweeper you could be, and I think we got a little glimpse of why Saban is one of the best living-room recruiters who ever blew through the South. I hurried back toward my hotel room, all fired up to be the best damned street sweeper I could be, just as soon as I stopped at Starbucks and checked Twitter and Facebook and watched a few minutes of CNN and ESPN and stared out at the pool seven stories below my window and let another hour of my life pass me by without accomplishing much of anything except the completion of this sentence.

Which, I guess, explains this as well as anything. 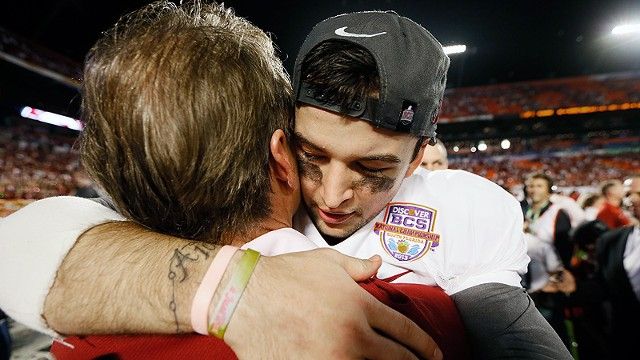 I‘m not sure how much longer this can go on. I know that college football is given to dynastic eras, and that these eras often crash to a conclusion in unexpected ways, whether through scandal or through the cycle of graduation or through a coach anxious for a new challenge.1 I presume that complacency cannot be combated forever, even in Saban’s zealous little fiefdom, where distractions are spayed and neutered before they can procreate. I presume that programs like Oregon and Johnny Football U. will continue to close the gap by expanding the boundaries of the game itself; I presume that Florida State will someday be able to make it through a season without all that talent tripping over its own shoelaces; I presume that Urban Meyer is going to win a hell of a lot of games at Ohio State; and I presume that a four-team playoff will ensure at least a little bit more randomness than what we have at the moment. I wish we had it now, if only because it would have been fascinating to see what bizarro Scott Van Pelt–placard variations Chip Kelly might have been able to devise during a month of preparation for HaHa and the gang; I wish we had it now, because it seemed pretty clear by the end of the season that Oregon-Alabama was the matchup we deserved, and that Notre Dame — at least this year’s version of the Irish — was indeed nothing more than a glittering obstruction in the way of potential progress.

“I think we should make more decisions based on what the fans like, and what the fans want to do, and what gets fans in the stands,” Saban said, and this is a thorny question, of course, because fans will tend to like whatever is best for their own particular cut of this college football universe.2 Nobody in the South is particularly disturbed by the makeup of the last seven national champions; it is up to the remainder of the country to devise a way to stop it. In the case of Alabama in particular, it is up to others to shake things schematically, to bust through the Tide’s physical and psychological wall the way Texas A&M (now part of this Southern hegemony, as well) did — by prolonging plays and ad-libbing a sort of improvisational Johnny Football jazz, a Wild West scheme that ran through Saban’s fists like water. The best hope of frustrating a perfectionist, I guess, lies in preparing something unpreparable.

So this is where we are. This is the state of college football in 2013. Toward the end of last night’s mercy killing, Jones and his quarterback, AJ McCarron, were seen going after each other on the sideline for some inconsequential miscue, and it felt like one team was approaching this with grave seriousness and the other was just playing a silly little game. It’s what Saban does so effectively: He can lead you to question your presumptions about yourself, to combat complacency, by forcing you to look inward. I imagine most football coaches would like to think they have the ability to do this — I imagine Brian Kelly thought he’d prepared Notre Dame about as well as he possibly could for this game — but Saban studies it, and hires psychologists and counselors to help him achieve it, and has no real interest in pausing to observe the macroscopic at the expense of all the little things that allow this factory to run. It’s a fun thing to joke about, and it’s a frightening thing to consider, because it makes you wonder if he’s the only one of us who isn’t wasting his time away.

“Next year’s team is 0-0,” he said this morning, and with that, the streak started all over again.