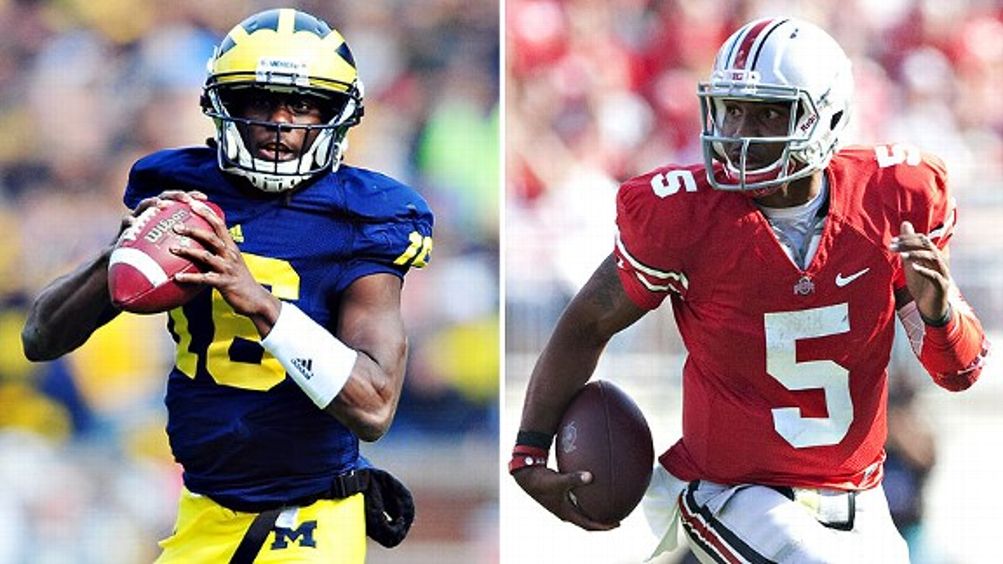 Editor’s note: For Rivalry Week, we invited the sports editors of several college newspapers to compete in a friendly write-off. To vote on who won, visit our Facebook page. To read the first, second and third parts of the series, click here and here and here.

On Saturday, take a look at the big, slightly overweight man on the Michigan sideline. Really look at him. Without even coaching in it yet, he’s changed The Game. When coaches arrive at Michigan and Ohio State, it’s the first thing they mention. The Game is bigger than any one man, but the rivalry is defined by the coaches who were a part of it: Woody, Bo, Lloyd Carr, Jim Tressel.

Now it’s Brady Hoke’s turn. And for Michigan fans, that’s something to celebrate. A Michigan assistant for eight years, Hoke left after the 2002 season for his first head-coaching job. Hoke spent the next eight seasons righting two different programs, and as the Rich Rodriguez era came to a merciful end, Hoke was given the chance to come home.

All he’s done since is prove that there’s a bit of wizardry in the big man with the strained voice. It took one training camp for him and defensive coordinator Greg Mattison to save the defense Rodriguez claimed Vince Lombardi couldn’t fix. The Wolverines are sixth in the country in scoring defense, and even as Urban Meyer looms on the horizon for OSU, Saturday feels different. And it’s not just because it’s Ohio State, or because Hoke refuses to wear red, or because he refers to the Buckeyes as simply, “Ohio.” It’s different because Hoke’s here and he’s angry.

His seniors, the ones he raves about so much, have endured the worst three-year stretch in Michigan history. Seven straight losses to Ohio State — and nine of the past 10 — removed hope. Well, according to the record books, last year didn’t happen, so make that six straight and eight of the past nine. Still, there’s no hiding it: Lately, Michigan fans have gone into Ohio State games the same way you go into a one-on-one game with your older brother. All belief is snuffed out as soon as he packs your first pathetic attempt at a jumper. Now the hope is renewed.

In the biggest game of his career, Hoke won’t have an off day. Not when Michigan is simply the better team. Say what you will about Denard Robinson’s arm, but at least he’s completed double-digit passes in a game. Braxton Miller is the smaller Terrelle Pryor who can’t throw, which really just makes him a slower Robinson with less-cool hair. The Buckeyes are 108th in the nation in total offense, behind powerhouses like Tulane and San Jose State. Michigan is in the top 40 in total offense and top 15 in total defense. The only thing Ohio State can do is run, and the best thing about the Michigan defense is that they can stop it.

But this is a rivalry game, and if there’s one thing 24-hour sports television has taught our generation it’s that you throw out all the records and stats in this situation. I’ll play along. Let’s say this game is a toss-up, a true two-team, Tressel-less raffle. We’ll even ignore the vast difference in coaching competency. What qualities does a team need to win close games? Experience helps. Ohio State has five veteran starters and a freshman quarterback. Michigan has eight, and its quarterback has been here before. Home-field advantage will play a factor. Michigan has that. Tressel used to get the breaks when it mattered, but now he’s gone. And his replacement is a coach whose team just lost to Purdue because it couldn’t kick an extra point.

When Tressel was fired, plenty of OSU fans stopped making their moonshine long enough to march to his house in support. From his doorway, Tressel shouted:

“We” doesn’t include Jim anymore. The losing streak doesn’t matter anymore. Everything is different. There’s a new chief of the rivalry. And he’s not losing his first Game.

There will be no Big Ten championship game for Ohio State football in 2011, but, boy, what a show it might have been.

After OSU’s 26-23 overtime loss to Purdue on November 12, Buckeyes players and coaches stopped just short of conceding their chances of Big Ten glory. “We got plenty more years to go,” freshman linebacker Ryan Shazier said. “We’re just going to do what we can to finish out strong.” Seven days later, Penn State came to Ohio Stadium and claimed a 20-14 victory that officially ended any chance of the Buckeyes advancing to Lucas Oil Stadium in Indianapolis for the conference’s inaugural title game.

It was a tough pill to swallow for a team whose four conference losses came by a combined 19 points, but the Buckeyes have nothing to show for the near losses except the satisfaction that they stood toe-to-toe with the Big Ten’s best. Ohio State’s 10-7 loss against Sparty on October 1 showed that the team could compete even when the offense was ineffective. A week later, Buckeye Nation saw its team play arguably its best three quarters of football in 2011 on an historic occasion at Nebraska’s Memorial Stadium. Ohio State jumped out to a 27-6 lead before a fourth-quarter surge by the then-14th-ranked Cornhuskers led to a 34-27 Buckeye defeat.

The disappointment of opening conference play with two losses was short-lived as the Buckeyes rattled off three consecutive wins against no. 16 Illinois, no. 15 Wisconsin, and Indiana. After defeating the Hoosiers on November 5, OSU stood at 6-3 overall and 3-2 in the Big Ten. Above all, Leaders Division-leading Penn State still faced what is always considered the unenviable task of traveling to the Horseshoe in Columbus, Ohio.

Hopes were high, and the prospect of a Big Ten championship even in a down season seemed within reach. Then came the gut-wrenching overtime loss to Purdue and a loss to Penn State to seal OSU’s conference fate.

Big Ten fans know how the Buckeyes competed and scrapped in 2011. A turnover here or a made extra point there and fates might be reversed. But a five-loss season is a five-loss season, and now all that remains is a trip to Ann Arbor for “The Game.”

At a Monday press conference, Buckeyes coach Luke Fickell said that the 2011 campaign has been reduced to a one-game season. “It’s still the Ohio State-Michigan game. Still the greatest rivalry in all sports,” Fickell said. “We wouldn’t attack it any other way. That’s what is remembered.”

Fickell’s first head-coaching appearance against Michigan may also be his last. A new head coach, and a possible ticket to next year’s title game, may be arriving in Columbus shortly. According to a report from WKMG-TV in Orlando, former Florida coach and current ESPN analyst Urban Meyer has agreed in principle to become OSU’s next head football coach. OSU spokesman Jim Lynch did not deny that a deal had been completed for Meyer, saying, “We have not been commenting on rumors and speculation.”

Michigan, currently sitting at no. 15 in the BCS standings, is 9-2 entering Saturday’s game, and is favored to beat OSU and end its current six-game losing streak to the Buckeyes. Nothing is certain when it comes to “The Game,” and both Michigan and OSU have upset one another on occasion. A year from now, Meyer may be guiding the Buckeyes in their annual game against the Wolverines, and Michigan’s upper hand could be as short-lived as a single season.

Sadly for OSU fans and the Big Ten, these are all “what ifs.” Ohio State will spend Saturday trying to salvage something of a disappointing season, and the Buckeyes will be watching the Big Ten championship game on TV in Columbus this year. But this week is still “The Game,” and next year, there’s the hope that once again it might mean that much more.