No Chattering in the Press Box 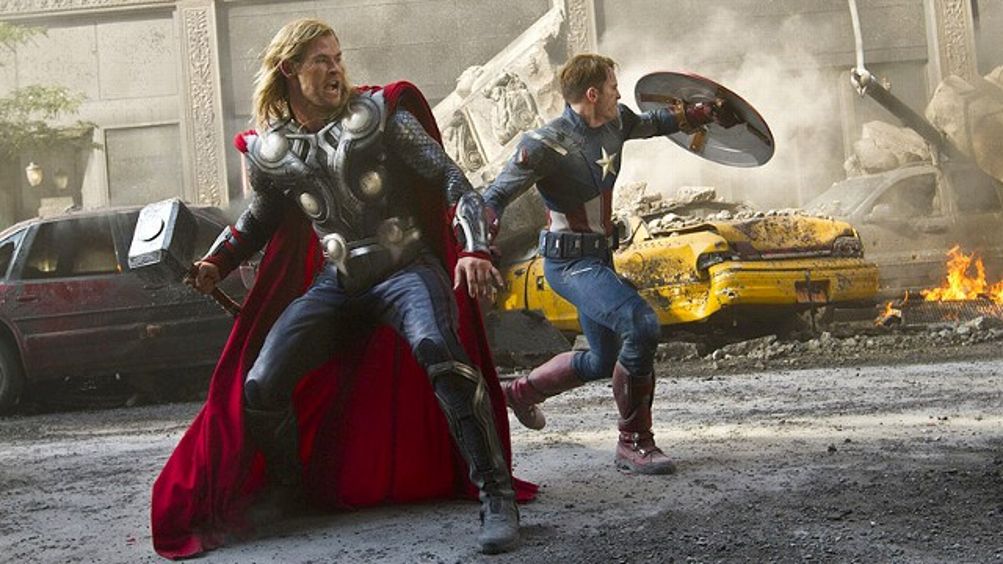 Now that The Avengers has already stomped all over box office records in Taiwan, the Philippines, Hong Kong, Mexico, Brazil — and come within a hair’s breadth of similar glory in fickle Australia — it seems guaranteed that when the bloodless dust of a thousand dead superhero foes settles on Monday morning, Disney will at last have a genuine 2012 blockbuster on its hands. As it should.

Joss Whedon’s meta-tentpole blockbuster is as good — or at least as emphatically What It Was Supposed to Be — as fanboy prophecy has tremblingly suggested. Barefoot Scarlett Johansson as Black Widow, speaking scornfully in Russian while tied to a chair! Robert Downey Jr.’s Iron Man, making sardonic Shakespeare in the Park jokes at Chris Hemsworth’s Thor’s expense! Mark Ruffalo’s tweedy, colonial chic, as his Bruce Banner hides out from the Hulk in a colorfully otherized Calcutta! The obligatory, wanton destruction of — SPOILER ALERT, assuming it is possible to spoil even a single scene in one of the most well-publicized and advance-marketed films of all time — New York City’s admittedly unloved general midtown area!

But it is perhaps worth noting, before we plunge into another long summer of Dark Knight Rises trailer scholarship and strange, ineffable feelings about Taylor Kitsch, how much we suffered to get here. Avengers, of course, could not exist without the uneven and often rote five films — Iron Man, Iron Man 2, the now superfluous Edward Norton–starring Incredible Hulk, Thor, and Captain America: The First Avenger — it took to introduce its odd-couple sparring partners. But it’s also probably true that the super-involved, brands-within-brands-within-brands franchise ideal The Avengers represents is pretty much precisely what made 2011 a legitimate contender for one of the worst summer movie seasons of all time.

On the likely chance you’ve blocked the months of May, June, July, and August of last year out of your mind forever, let’s try to make this as brief and non-traumatic as possible. There was the colossally ill-advised attempt to make a star out of Ryan Reynolds and a successful movie franchise out of Green Lantern, a beloved comic book with a wholly impenetrable native mythology (something about “the emerald energy of willpower” and the color yellow, I think). In Transformers: Dark of the Moon, Michael Bay forced real-life American hero Buzz Aldrin to salute one CGI robot and nearly raped Rosie Huntington-Whiteley with the creepy animated tendrils of another. And on it went — the sound-stage costume buffoonery of Avengers precursor Thor; X-Men: First Class, a good, kitschy insta-reboot that disappeared into the swamp of a hundred other comic book movies; Cowboys & Aliens, a marketer’s dream with a tagline for a title and a sad pile of sawdust and 10-gallon-hat brim sweat where its heart should’ve been. Avengers will or won’t be the best summer movie of 2012. But it was certainly the best summer movie of 2011, a year that it dominated despite not even existing yet.

It is well documented by now, the vicious, self-sustaining loop by which we disappoint ourselves each summer at the multiplex. Since, as the story goes, the heady, lucrative late-’70s summers when audiences flocked to Jaws and Star Wars, theatergoers have drifted to a style of summertime cinema that has become steadily bigger, louder, and more expensive — emphasis on the latter. The insane advertising and development costs of the Harry Potter–style franchises we consistently reward at the box office have turned studio heads into marketers trying to find audiences big enough — i.e., young enough and male enough — to justify the cost of movies whose budgets routinely exceed $200 million. At that kind of rarified airspace, in which the marketing budget amounts to as much as half or more of whatever is spent on the actual film, you need a sure thing, like a toy, or a preexisting brand; auteur types and people with new, unproven ideas are dangerous and threaten the bottom line. Better to just make a movie called Candy Land starring Adam Sandler and pray that people remember that a board game of the same name once existed.

Avengers is perhaps the purest product of these pressures, maybe of all time.The film is less a tentpole than an entire lean-to built of other, lesser tentpoles.

And Avengers is perhaps the purest product of these pressures, maybe of all time. The film is less a tentpole than an entire lean-to built of other, lesser tentpoles, featuring a geek-god director, in Joss Whedon, fed to the lion of 75 different constituencies — studio heads, comic book nerds, Marvel executives, Whedon’s fellow franchise directors. Avengers banks on not one star or preestablished character but six of them, all of whom compete for screen time and top billing. Whedon, who has placed women at the center of nearly everything he’s ever done, has said in interviews that he went out of his way to develop Johansson’s Black Widow as a strong female in a film otherwise dominated by and marketed to men — perhaps because of this, Johansson’s single most indelible moment in the film comes when she’s wearing a cocktail dress and being slapped across the face at the command of legendary Polish film director Jerzy Skolimowski.

Is Avengers a good movie? Relatively speaking, sure. It is the platonic ideal of the largely failed spectacles of last summer, many of which failed precisely because they attempted and were unable to achieve what Whedon has succeeded in doing here. Avengers is certainly a far superior film to that other pre-summer Disney blockbuster, John Carter, the spectacular failure of which helped prompt former studio boss Rich “Rick” Ross’s bridge leap into the horizon a few weeks ago. Whedon is very good at finding the tiny human actors in the midst of city-size battles — one sequence in particular, in which the camera follows one Avenger to the next as they roll, tumble, and soar around New York, is as impressive as anything you’ll see in a film of this ridiculous scale. And while Johansson’s Black Widow and Jeremy Renner’s bland, purposeless Hawkeye don’t quite have the chemistry they’re supposed to have as the two resident non-superheroes onboard, the script’s simmering Iron Man/Captain America crypto-erotic tension is a thing to behold.

Whedon is often criticized for having his characters crack irreverent Galaga jokes at one another’s expense in the midst of otherwise “serious” and mythically important moments, but here he has tapped into probably the most interesting conflict this set of uncomfortably mated characters could provide. There is a natural animosity between Tony Stark, self-described “genius billionaire playboy philanthropist” — also, trust-fund baby — and Captain America alter-ego Steve Rogers, who represents every rugged American value of homespun independence, fidelity, and enterprise, except for the inconvenient fact that he got most of his special abilities from a lab experiment conducted in part by Tony Stark’s dad. Whedon gets plenty of humor out of this pairing. But it’s also the perfect lens through which to tease out the moral issues of power and responsibility and merit that are pretty much the only things that make the Avengers an interesting group of people rather than a mere Marvel greatest-hits reel.

In the end, Avengers is at once a great summer movie — a well-written, well-directed blockbuster that does an admirable job making sense of a universe in which the Norse god Thor has to make casual conversation with Mark Ruffalo — and a bright shining example of why the medium seems to disappoint us more and more frequently. It’s a model; just not, perhaps, the model we actually want. Looking ahead to the rest of the summer season, we are in for everything but a surprise. There is The Dark Knight Rises. There is Ridley Scott’s Alien prequel Prometheus. There is yet another Spider-Man, starring Andrew Garfield; a follow-up to GI Joe; MIB3; a Total Recall reboot; and a Bourne Legacy that swaps out Matt Damon for Jeremy Renner, an actor who seems to have pledged himself exclusively to sequels at this point. There are other, less schematic movies coming, too, of course — from Wes Anderson (Moonrise Kingdom), Steven Soderbergh (Magic Mike), Woody Allen (To Rome With Love), and whoever directed that movie that stars Joseph Gordon-Levitt as a bike messenger, among others — some of which might emerge as genuine successes, even if they largely represent an idea- (rather than brand-) driven model that is never coming back to summer.

Which is fine. There is nothing wrong with franchises, or blockbusters, which at their best basically embody nearly every pleasure humans seek at the theater — at least once the temperature cracks 80 degrees. But as the pitiable 2011 summer-movie slate and the long, awkward run-up to Avengers showed, there is a cost to doing business like this beyond the typically cited homogeneity of the type of films we get when everyone is forced to wear a cape. With huge amounts of studio money, not to mention idea guys like Whedon and actors like Robert Downey Jr. tied up and off the market for years’ worth of byzantine contracts for sequels, spin-offs, and product tie-ins, movies like the Avengers don’t just need to be good; they need to compensate us for everything we don’t see in their place, not to mention the inevitable lackluster attempts to replicate their outsize success. Because with every year that goes by, we have fewer and fewer other options.

The Avengers is already a smash. Our reward? Iron Man 3, Thor 2, Captain America 2, and if the obligatory post-credits sequence in Avengers is any indication, Avengers 2. Whedon did something near miraculous, making Avengers into something entertaining. But that is an awful lot of a good thing.

Zach Baron’s other favorite blockbuster in 2011 was Fast Five. Find him on Twitter at @xzachbaronx.