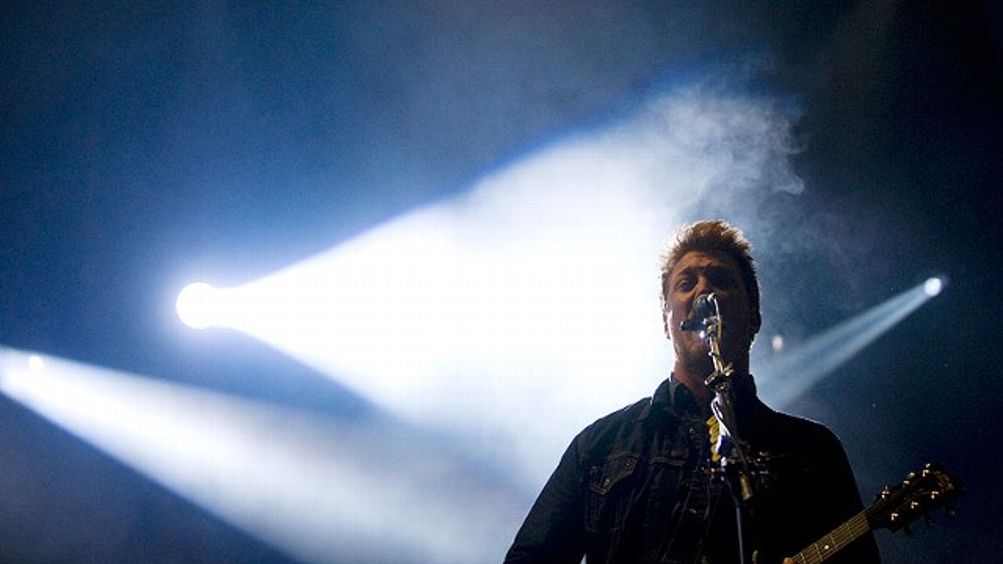 Unless you’re a person who is obsessed with comic books, fantasy novels, and iconic sci-fi franchises of the ’60s and ’70s, pop culture is not presently configured to satisfy your deepest, most unquenchable desires. Instead, you must be patient. More important, you must be lucky. The best you can hope for is a rare moment of cosmic alignment, when art and commerce briefly work in concert to facilitate your exact perfect thing. This happened for me in 2002, when Queens of the Stone Age put out their third album, Songs for the Deaf. I realize that rock geeks wear a different shade of trench coat from denizens of more predominant forms of nerd culture. But for those of us who have melodic, brainy, and self-aware hard-rock bands roaming in our imaginations like Dothraki warriors stalking the countryside, Josh Homme was our J.J. Abrams, and Deaf was a Patton Oswalt fever dream of Deep Purple riffs, Cheap Trick melodies, Frank Zappa cultural irreverence, and Nirvana fructose-enhanced fuzz. This was an album that addressed a topic near and dear to the hearts of alienated rock fans: the dispiriting and inherent suckage of commercial rock radio. And it was hooky enough to actually get Queens of the Stone Age on the radio — how genius was that? Deaf was heavy in places but never dunderheaded; it was also light at times but never wimpy. It boasted excellent musicianship and mookish energy. It sweated out sex and exhaled sophisticated song structures. It was everything you could possibly want from an early-’00s pop-metal record and never thought you’d get again in the wake of nu-metal.

Next week, Queens of the Stone Age will release … Like Clockwork, its sixth studio record and first in six years. It’s (just) pretty good. I think I’m a little disappointed by it, frankly, given how high my expectations were going in. But to be fair: It has three songs I love and none that I hate, which isn’t a bad ratio for a band 15 years deep into its discography. Also, I’m probably not playing it the correct way. I’ve only been able to hear the album digitally, and I suspect it was constructed with the vinyl version in mind. Side A is the “song” side — the record’s sleekest heat-seeking pleasure missiles (“I Sat by the Ocean,” “My God Is the Sun”) are stockpiled here. Side B (which I’m guessing would begin with the sixth track, a dreamy prog-rock robo-ballet recital called “Kalopsia”) is the “menacing experimental side” — it feels twice as labored over by Homme as Side A, and four times as long.

Because of the extended wait between albums, and Homme’s much-advertised all-star supporting cast (which includes Dave Grohl, Trent Reznor, Elton John, Alex Turner of the Arctic Monkeys, Scissor Sisters’ Jake Shears, and Mark Lanegan, plus Scott Caan and Casey Affleck in the comic relief roles),1 … Like Clockwork has the look of a Deaf-like statement, when in fact it’s been conceived and executed as another workmanlike post-Deaf QOTSA record in the vein of 2005’s (somewhat underrated) Lullabies to Paralyze and 2007’s (more or less accurately rated) Era Vulgaris. It’s a welcome, though not essential, addition to the band’s canon. This is due (at least in part) to the context in which this album arrives. Songs for the Deaf was clearly the best record of its kind in a largely barren era for hard rock; it was defined as much by what it was against as what it was propagating. … Like Clockwork might’ve been that kind of record if it had dropped in 2002. But now, in a more enlightened 2013, it isn’t even the best metal-tinged rock album coming out in the next two weeks.

Stalwarts will insist this has always been the case, but for the rest of you: Anyone interested in forward-thinking rock music should focus on metal right now. As indie bands continue to either reiterate the same preapproved set of post-punk and ’80s college-rock influences, or back away from rock entirely, the current generation of adventurous metal groups is setting its sights high by boldly mixing genres, exploding verse-chorus-verse songwriting formulas, and cutting caustic noise with spritzes of breathtaking beauty (and vice versa). Metal is the last refuge for artists who still believe that rock music can be a venue for heady artistic ambition and innovation — the genre has been filthy lately with four-sided concept records and songs that wind through ridiculously complicated “movements” over the course of 10 or more minutes. What’s even more exciting is how approachable a lot of this music is.

Lest we forget, the history of popular rock music going back more than 40 years has been dominated by populist chin-scratching headbangers. It’s no coincidence that in the last decade, as rock music receded from the commercial landscape, many of the era’s best metal bands opted to cater exclusively to a metal-only audience. What was commonplace from the early ’70s through the late ’90s — the artistically credible and hugely popular metallic pop band, from Led Zeppelin and Black Sabbath up through Guns N’ Roses and Metallica — became an endangered species in the ’00s. But recently, a shift back to this archetype has started to take place. In 2011, Mastodon — probably the best and most influential metal band of the last 10 years — took a break from making literate story records about whales and wormholes to release The Hunter, a straightforward, easily digestible, and mostly fantastic pop-rock record. Last year, Georgia sludge-metal combo Baroness harked back to overstuffed alt-era classics like Smashing Pumpkins’ Mellon Collie and the Infinite Sadness and Nine Inch Nails’ The Fragile with its double album Yellow & Green, while Miami power trio Torche produced the excellent bubble-grunge LP Harmonicraft. 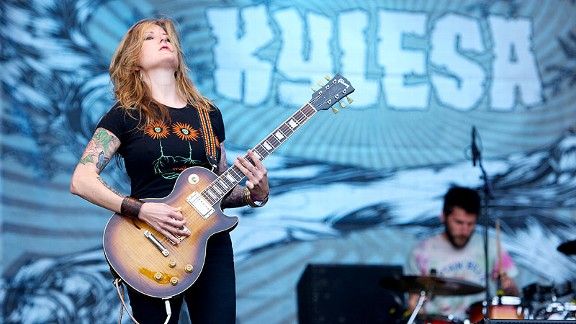 Both records seem to have been dreamed up rather than recorded. They invite you to crawl inside and take up residence in fully realized worlds. True-blue metalheads might question whether they’re metal records at all — both groups delve deeply into plush soundscapes that are reminiscent of early ’90s British shoegazer bands. (Deafheaven’s moniker is a tribute to the great dream-pop outfit Slowdive.) On Ultraviolet, guitarist Laura Pleasants assumes a more prominent vocal role over singer Phillip Cope’s guttural, hardcore-inspired throat blasts, taking Kylesa down a more ethereal path away from the chunky psych metal of its previous records. A hard-charging unit that utilizes two drummers along with the requisite wall of guitars, Kylesa still hits with plenty of force on Ultraviolet, but the sparkling “Unspoken” and molten “Steady Breakdown” are also unmistakably tuneful, even poppy.

Sunbather, which will be released on June 11, is more extreme — the melting-Nazi screams of singer George Clarke will be an automatic deal breaker for the uninitiated. But if you can accept the vocals as another ecstatic instrument in a bracingly emotional surge of sound, Sunbather will reveal itself as the most flat-out majestic rock record of the last few years. On the group’s 2011 debut, Roads to Judah, Deafheaven seemed to be grasping for something grander while also establishing its black-metal bona fides. But Sunbather leaves all genre designations behind. It’s an album composed of warring juxtapositions: darkness and light, calm and terror, guitars that roar like a Wagnerian opera or glide softly like a sleepy bedroom strum. The resulting alchemy achieves an unlikely serenity. You know that part in I ♥ Huckabees when Mark Wahlberg and Jason Schwartzman slam each other in the face with a rubber ball until all conscious thought has temporarily exited their brains? Sunbather is like that. It pummels you until all that’s left in your cranium is a sweet, gaping expanse of nothingness. This is to say, it will blow your mind.

… Like Clockwork will not blow your mind. Turns out all the talk about the guest stars was a red herring. Grohl plays on half the record, but everybody else shows up in just a few places: the glammy sing-along “Fair Weather Friends,” which ranks among the album’s weaker cuts, and the Mephistophelian rager “If I Had a Tail,” which might be the best. Homme has often talked about the first three Queens of the Stone Age records — 1998’s self-titled, 2000’s Rated R, and Deaf — being a self-contained set. Clockwork completes Homme’s second trilogy, which has been more introverted and concerned with atmosphere and texture over snappy songs. Clockwork is the kind of record that a guy makes in his own studio when he’s on an open-ended deadline; it’s commendably crafted and intermittently urgent, a purposefully minor work from a formerly important band.

If that sounds more negative than I intend, it’s just my greed talking. I want Queens of the Stone Age to keep giving me perfect things. How quickly I forget my own advice about patience and luck. I should just be happy for what … Like Clockwork is rather than mourn what it isn’t. Rock geeks no longer need Queens of the Stone Age to be great; it’s nice just to have them be.