Klitschko vs. Haye: Why you should care 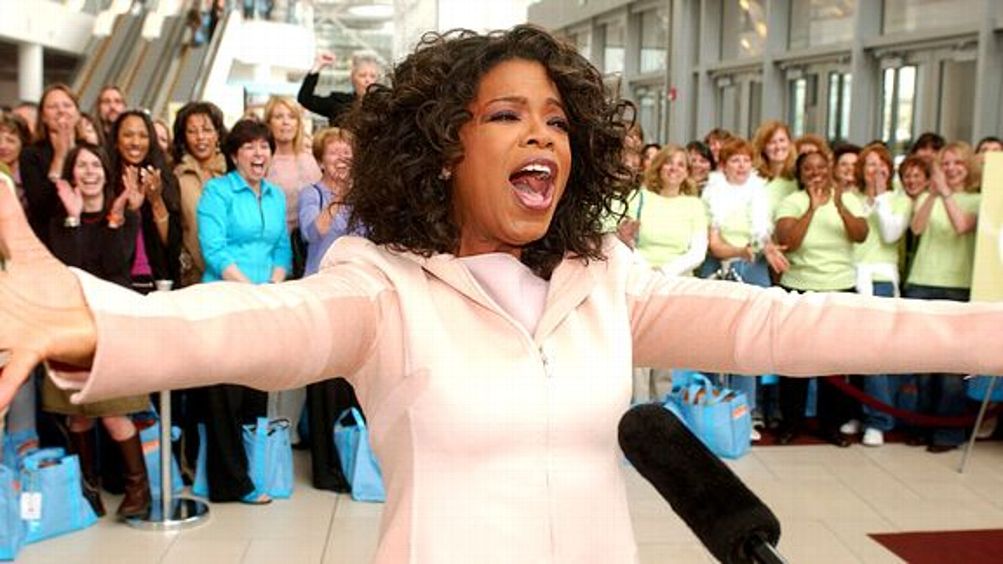 You probably already know this, but I’m going to remind you anyway: Oprah Winfrey is big-time. Big. Time. She is a saint, an epoch, a tectonic-level mover-and-shaker. And I wouldn’t need to tie a sentence around your finger about it except — get this — folks have been all “Post-Oprah” now that she’s left a The Oprah Winfrey Show-sized black hole in daytime TV (RIP, crosses heart, pours mid-afternoon latte).

But peep: Jordan played ball in the post-Jordan era. And Obama runs the point in the post-Obama era. So, too, can Oprah hold court in the post-Oprah era. That’s why nothing — nothing! — is chipping at the corners of my heart like this awkward sense that the collective culture at large is pooping on Oprah. Do not shake your head and tell me no. It’s out there, I’ve seen it. I’d link except I don’t want to point flashlights.

Oprah, dawg? We pooping on Oprah?1

From a distance, sure, I grok it: Oprah as cultish religion, Oprah as orthodoxy, Oprah as narcissism run amok. But I wonder how quick we’re to forget the Oprah that got us here. The post-racial Oprah — who was first to transcend race with her wallet. The post-information Oprah — who showed us what was worth sharing, and oversharing, through her own personal stories of child abuse, teen pregnancy, smoking crack, not to mention the well-chronicled weight issue. Then there’s — and pardon my stretching — post-feminist Oprah. The most influential woman on the planet, with no children of her own, but spirit-mom to the universe.

Some artists raise you. And maybe that’s what I’m trying to reclaim here. Oprah’s OS needs an update. Some new apps. A breath of fresh sensibility source codes. I hate to say it, but, your OWN ratings are embarrassing, like ill-fitting mom jeans. It’s time for a makeover!

So here we are. The Pitch: New shows for the Oprah Winfrey Network. Five ideas, two for hip hop, two for blog-media, one for the young m’ladies, three relevant genre-things (categories) that have evolved in the post-Oprah era. Dim the lights, pop some corn, retrieve one of your favorite things. Let’s program our mom’s television:

YOU MIGHT BE A RAPPER
Elevator Pitch: Curb Your Enthusiasm meets 8 Mile
The Hook: Imagine Larry David or a Seinfeld as an idiosyncratic self-loathing up-and-coming emcee.
The Tagline: A rhyme is a terrible thing to waste. Terrible!
The Time: Monday, prime time.
The Competition: Entourage, How To Make It In America, Curb
Replaces: I don’t know if current Monday evening staple Unfaithful: Stories of Betrayal is good, but I can dig that premise. Airing out infidelity is very relevant in the Tiger-Weiner era. So this might make a good complementary lead-in.
Summarily Speaking: Privilege knows nothing of nothing — it has no experience with that. And one of the accomplishments of Seinfeld and Curb was to make that ornery entitled misanthrope accessible. To make privilege funny. (The maid! Ach!) Hip-hop affords its own idiosyncratic privileges — Smoke weed every day! N-word, my N-word! Ogling booties can be done without becoming self-conscious! All ripe for exploration.
Oprah’s Moral: With great power also comes great privilege. And vice verses. Thrice curses. Sliced bursars.
The Crucial Ingredient: A black Owen Wilson. Donald Glover comes to mind. This clip of him being nebbish over the n-word is exactly what we need to see more of from grouchy rappers. Groucho Marx me. Yes please. Plus Donald’s career has hit the point where he should get a test drive as engine of a show. Done and done.

THE BLUE ROOM
Elevator Pitch: Glee meets The Wire
The Hook: At a Connecticut boarding school a band of kids “from the inner city” meet weekly in a makeshift “Blue Room” to talk beats, rhymes, and life.
The Tagline: Too school for cool.
The Time: Sunday evening.
The Competition: Glee, Community
Replaces: Currently OWN has Oprah Behind the Scenes and Shania Twain’s Why Not. Both have built-in expiration dates, so this can slide right in.
Summarily Speaking: The kids from The Wire Season 4 (-) The Wire (+) Flight of the Conchords (/) the twee.
Oprah’s Moral: Get your nerd on. Hip-hop culture needs a My So Called Life or Freaks and Geeks.
The Crucial Ingredient: Good music. Nothing is tuned out faster than bad hip hop beats. Get some headliners to keep heads nodding: Kanye and Jay should be down with the for art and profit agenda (Jay just inked a development deal with Adult Swim). Perfection is a donation from Pinkett-Smiths and Carter-Knowles Foundation for No-Duh-Let’s-Do-This Entertainment.

BEAUTY & THE BLOGGER
Elevator Pitch: Sex and the City meets Fight Club meets The United States of Tara
The Hook: A socialite type (think black SJP) is blogging, having fun, until her militant, feminist side starts showing itself more and ruining relationships.
The Tagline: Online no one can hear you scream … “Hegemony!”
The Time: Thursday night (so the fem-blogs can write about it before the weekend).
The Competition: Sex and the City reruns on TBS.
Replaces: What Would You Do?, a hidden-camera show. This show can offer the same voyeuristic elements, but better than candid is crafted.
Summarily Speaking: SATC always needed more 1. Multicultillectuals (multicultural + intellectuals) 2. Digital internet culture. As our femme fatale deals with boys, blogs, and — OMG, are those blahniks for sale? — her “dark” side can ask if she’s only shopping for the white-boy patriarchy. Sprinkle some occasional “how your blog-media sausage gets made,” and voila! A strong maybe of a show!
Oprah’s Moral: Be comfortable with yourselves. All of them.
Crucial Ingredient: Michelle Rodriguez has the ethnic ambiguity and gender-neutral ambivalence we’re shooting for. Maya Rudolph would get the humor.

CULTURE RAT 3.0
Elevator Pitch: Tosh 2.0 meets Radiolab
The Hook: Not all viral videos are punch lines, this is culture shock therapy for culture shock.
The Tagline: Putting the Cult in Culture.
The Time: Weekday afternoons.
The Competition: Whoever is on in weekday afternoons. Ricky Lake?
Replaces: The Gayle King Show. I don’t want to hate on Oprah’s BFF, and I’m sure she does a credible job. But do we need another samey-same talk show? Oprah maxed this line of credit out.
Summarily Speaking: We really needs some swag freshener on the frat-boy-in-front-of-a-green-screen shtick (no offense to Daniel Tosh, I see his humanity straining from behind the glass). But we can turn this medley of clips-and-marginalia conceit into a no-frills Daily Show for the creative underclass.
Oprah’s Moral: Always be learnin’ (Oprah’s spin on Mamet/Baldwin Always Be Closing).
The Crucial Ingredient: Picking the right voice from the healthy pool of irreverent-but-still-political-and-opinionated Vloggers out there is key, but before that comes a producer/editor with a golden touch for panning the web, curating clips, etc.

SWIMMING LESSONS FOR DIRTY GIRLS
Elevator Pitch: Dan Savage meets iCarly
The Hook: The sex-positive-dating-advice show for young girls. Everything they need to know, but you darn sure can’t tell them.
The Tagline: 1 + 1 ≠ 0.
Time: Weekday after school.
The Competition: There is no competition.
Replaces: In the Bedroom with Dr. Laura Berman. Nothing personal, but I prefer to keep the advice-givers and soothsayers fresh.
Summarily Speaking: The inter-litter-box is purring with the sounds of young ladies who grew up Oprah, watch Dr. Drew, and find their synapses ablaze with ideas on how to cope with being sexy, ambitious, and oh-so manic-adorable. On the Internet the terrorists have won (2-Girls, 1-Cup was 9/11 for the web?), and we need to soldier forward in a world where anything, from Friday to Double Rainbows, can destroy your world in an instant.
Oprah’s Moral: To quote Donna Martin from Beverly Hills, 90210: If you have a swimming pool, and you’re afraid your kids might drown in it, you can forbid them to go near it, even put a fence around it. But don’t you think you should at least teach them how to swim?
Crucial Ingredient: Someone well-versed in What Generation Y Girls Need to Know about hook-up culture, online chat, texting and “sexting,” online pornography, chat roulette, bullying, and politicians. Someone with Janelle Monae’s energy, Olivia Munn’s spunk, Zooey Deschanel’s emo-literacy, and, maybe twice a month, Chelsea Handler’s drunken promiscuity.

Or maybe, I don’t know, is there a young Oprah?