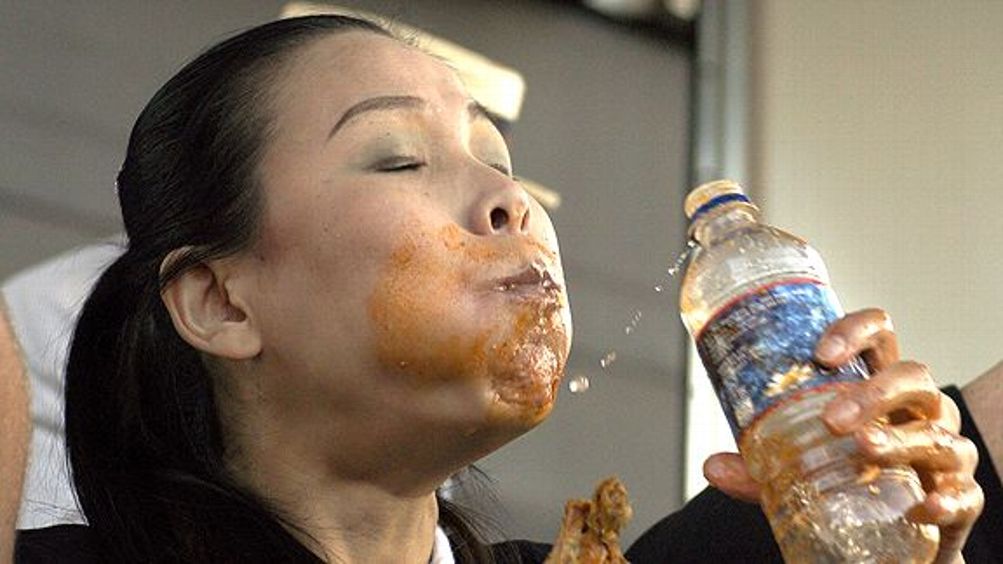 Say what you will about competitive eating: It glamorizes gluttony in an already fat nation and the sport is sustained by an unseemly blend of gross commercialism and drunken fraternity culture. Argue, if you really want, that it’s not a sport at all. But when the bout begins and those greasy chunks start to scatter, competitive eating has always had equality. Man and woman at the same table, mocked and cheered together as they battle through the same incomparable pain.

Not anymore. This year, for the first time in history, Nathan’s Famous Fourth of July International Hot Dog Eating Contest will play out in two parts — one showcasing eating royalty such as Joey Chestnut, Pat Bertoletti and “Notorious B.O.B.” Shoudt, and a separate, earlier contest, for ladies only.

It would appear that no one stands to benefit from this development more than Sonya Thomas, a Korean-born Burger King manager from Virginia who can down a couple hundred chicken wings in one sitting. Thomas, whose nickname is “The Black Widow,” began her career in 2003 and quickly became the best eater in America. Although she set U.S. and women’s records for hot dog consumption, Thomas never seriously challenged Takeru Kobayashi’s dominance back then, and in recent years she has fallen even further behind reigning champ Joey Chestnut at the Nathan’s event.

For the first time, Thomas will be the favorite this weekend when she steps up to the big table by the boardwalk. The Mustard Yellow Belt, the $10,000 first prize, the knowledge that she’ll retire as a champion — they’ll all be hers, thanks to the new format.

The decision to create a women’s contest, like so many decisions in sports, seems largely driven by marketing. Chestnut has won the past four Nathan’s contests. Kobayashi won’t be around to challenge Chestnut or bum-rush the stage (or so he says). There was no new storyline to sell in this year’s hot dog challenge until Major League Eating announced in April that women would be eating at their own table, with a prize purse worth $15,000 less than the men’s. MLE President George Shea initially rationalized that the extra exposure for women eaters would more than make up for the money difference, but Nathan’s soon ponied up enough cash to match the men’s prize.

Thomas says she was “kind of shocked” when she heard the news that she’d be performing at a separate table, and that suddenly she might actually win. At 43 years old, Thomas has slipped from two to five in the MLE rankings, and her chances of taking the Nathan’s crown were becoming progressively slim. Now her closest competition comes from Juliet Lee, who finished ninth each of the past two years, and Stephanie Torres, a first-time contestant who qualified with 23 dogs.

“I cannot eat 60 hot dogs in 10 minutes, no way. Fifty is difficult. So I’m never gonna reach no. 1,” Thomas says. “I have a chance to win now.” Her personal best is 41, a women’s record. Most years she eats in the mid-30s. She says her 19-pound stomach capacity is a little smaller than most men, but that’s rarely a factor in a 10-minute contest. Her slightly smaller esophagus could be a disadvantage with hot dogs, however, because they require a lot of chewing.

Years ago, MLE founders George and Richard Shea were fond of comparing Thomas to Billie Jean King (along with Anna Kournikova and a “jackal loose on the Serengeti“), but Rich Shea went with a different tennis analogy this year in an interview with the New York Post: “Serena Williams didn’t have to beat Roger Federer to win the Wimbledon title, and we don’t think Sonya Thomas should have to beat Joey Chestnut.”

So MLE declared a women’s winner in each of the dozen or so qualifying contests held around the country this year and offered a free trip to New York for any female qualifier who finished with more than 10 hot dogs. Nine women will take the stage on Monday.

Under MLE and the Shea brothers, competitive eating has become a complex parody, a sport that’s also about sports, roping in the crowd by tying popular narratives to real people and using it all to sell everything from Nathan’s hot dogs to Pepto Bismol. Now MLE is adding a new layer to the parody. Almost 40 years after Title IX, 15 years after the WNBA’s founding, the Nathan’s contest is segregating in the name of progress.

Thomas, who’s 5 feet tall and 105 pounds, became accustomed to being the only woman at events, starting with her first bout, a Nathan’s qualifier in 2003 at a rest stop on the New Jersey Turnpike. “They’re looking at me like, ‘Oh? That little girl is gonna win?'” Thomas says. “I like it. I’m the center of all the men, something like a flower.”

A flower that can eat 41 hot dogs in 10 minutes. Clearly, the gross-out side of competitive eating has never bothered Thomas. “Sometimes when you eat past 20 hot dogs or 25,” she says, “you’re feeling like my throat or my stomach [is] getting full, and there’s a sickness coming out.” But Thomas insists she has never vomited during an event.

She doesn’t train for contests. She just drinks massive amounts of Diet Coke at work. Chicken wings are her specialty. Last September, Thomas beat Chestnut at a wing-eating contest in Buffalo, with nearly five pounds in 12 minutes. She calls Wing Bowl 12 back in 2004 her “happiest time.”

Wing Bowl, the long-running Philadelphia tradition held early in the morning a few days before the Super Bowl, represents pretty much everything you might want to criticize about humanity. Promoted by a morning radio shock-jock, the contest is mostly an excuse for Philly fans to scream and get wasted a little earlier than usual. Professional eaters from out of town invaded Wing Bowl 12, and Thomas unseated fan favorite and then-champion Bill “El Wingador” Simmons with a 167-wing overtime victory.

When she returned in 2005, the crowd was not happy. Thomas says it didn’t get to her — “25,000 people and cheering, it’s so much fun” — but here’s how Jason Fagone describes the scene in his book Horsemen of the Esophagus:

Sonya enters the Wachovia to an immediate chorus of boos. She is the main villain this year. One of the eaters, Hank the Tank, had already circled the arena holding a crude sign that read SONYA, WHERE’S MY MASSAGE! Now fans brandish signs with similar sentiments. SHOW YOUR WONTON. SUCK MY EGGROLL. BLACK WIDOW, SUCK MY WING. BLACK WIDOW, SWALLOW MY BLUE CHEESE. The rain of garbage begins immediately.

“You have the wingettes, who are all of the local Philly strippers,” recalls Jenny Drumgoole, a Philadelphia-based artist. “They’re the ones who are serving the wings. They [the crowd] shout ‘show your tits’ the whole time.” Drumgoole, whose latest project is a series of videos submitted to Paula Deen’s “Real Women of Philadelphia” contest, including one recipe for the talking cream cheese head of John Rambo, learned about Thomas and became one of her most passionate supporters. “I started reading articles about this little woman who won this eating contest,” Drumgoole says, “and I sort of got obsessed with her as this sort of hard core guerilla feminist.”

Drumgoole won a spot as Thomas’ personal wingette and accompanied her into the fray in 2005. “I knew it was going to be bad,” she says. “People were throwing full glass beer bottles at us. By the time we got up, my hair’s wet, people were throwing garbage. Blocks of cheese hit me in the head. There was a part where it was a little scary — people were shaking those barriers.”

In the grudge match that followed, judges ruled that Thomas hadn’t eaten three of her wings cleanly, and she lost to Simmons by a single wing in overtime. Thomas is still skeptical of the judging.

But Thomas’ performance made an impression on Drumgoole. “I love the idea that she was beating the guys at their own game,” she says, “and doing it in a way that was sort of not making her being a woman an issue.”

Major League Eating’s promoters christened Thomas “The Black Widow” because she’s a man-killer at the table. She may not have chosen it, but her stage persona has been set. This year at Nathan’s, when Thomas joins eight other women behind those giant piles of franks, her moniker might seem less apt.

Michelle Lesco, a first-time contestant who ate 21.5 hot dogs at a qualifier in Arizona, has used the pseudonym “Cardboard Shell” — a reference to “Deep Thoughts” by Jack Handey — when she entered restaurant eating challenges in the past. She’s still not sure the MLE lifestyle is for her. “The hot dogs are completely different,” Lesco says. “Racing against people is different, as well. Every time I talk about hot dogs I think about Field of Dreams, where the kid chokes to death.”

Drumgoole has other concerns about the new contest. “One of the thoughts that I had was that it’s just gonna become this weird fetish,” she says, “because there are dudes that like to watch women eat.” She does have one suggestion to help level the playing field: “Put some men behind them in Speedos, holding the numbers for the women.”

The MLE isn’t likely to heed Drumgoole’s advice, but Shea insists the contest will bring positive attention to women in the sport: “It’s gonna send a message that competitive eating is fully acceptable for women.” It may not be Wing Bowl, but before a party weekend crowd at Coney Island, with models in swimsuits keeping score, it may be asking a lot to expect something far more dignified than, say, Lil John’s women-only chicken and Olde English contest in 2009. It’s sports, and it’s advertising, and the contest full of women is still a setup for men.

“If you take a look at Sonya and Juliet, both extremely slender, very elegant women — and then, bang, along comes Stephanie Torres — they all have a true feminine charm,” Shea says. “Any man that is in the room is gonna feel the power of the femininity in a very positive way.”