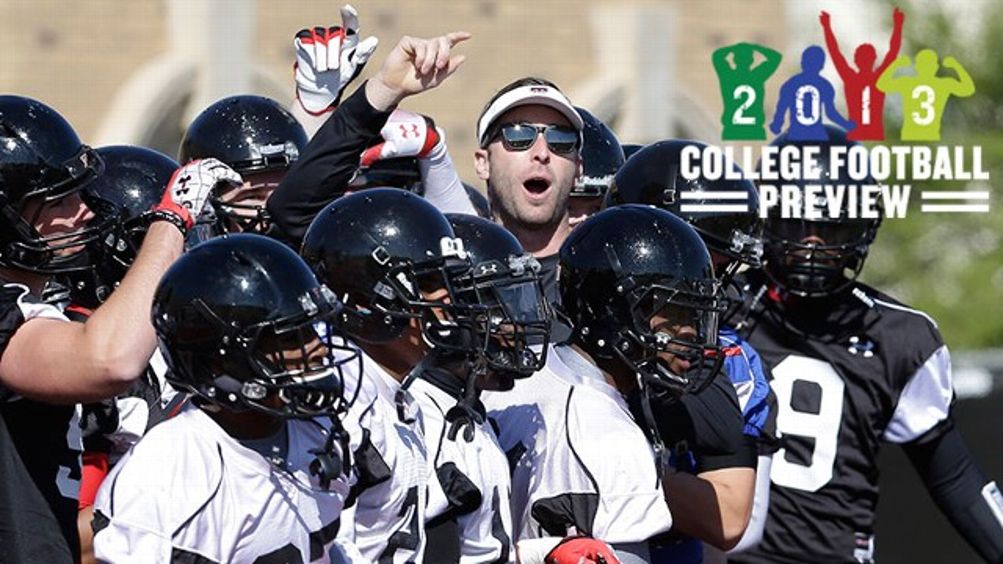 1. The Short Way Back

The first permanent head coach hired at Texas Tech following the acrimonious ousting of Mike Leach will not linger long in the collective memory of Lubbock, and that’s neither a bad thing nor a slight directed at Tommy Tuberville. This is highly unscientific, but it still just seems off to us that he was ever there at all, so entrenched in American football culture was The Way Of The Leach. Safe and splashless, the move was a perfectly executed “nothing to see here” gambit on the part of Tech’s administration, and begat a mostly serviceable tenure: two largely forgettable 8-5 seasons sandwiched around one losing 5-7 campaign before losing Tuberville himself to the Cincinnati job.

By that time, the Red Raiders also had a new athletic director — and Kirby Hocutt, who’d previously displayed a penchant for mining young talent by luring Al Golden to Miami from Temple, pulled a spiritual 180 from the T-Tubz era by plucking a coaching cousin of Leach’s, another young gun from the Air Raid coaching tree. Kliff Kingsbury had toiled in the coaching ranks since just 2008, when he was hired at Houston as an assistant and reunited with OC Dana Holgorsen. He was elevated to co-OC and quarterbacks coach in 2010 before following head coach Kevin Sumlin to Texas A&M in 2012. You are probably already familiar with what happened next.

For his part, Kingsbury, who will turn 34 just prior to the start of the season, believes the narrow age gap between him and his charges makes him more relatable to players. “I still feel like I could play at times. So I don’t feel very far removed from it. When we’re in meetings, I look around and say, ‘Hey, I was just sitting there not too long ago, and I know what you’re going through, and I’ve been in the exact same situations, in the exact seat you’ve been in.’ And so I try to take that into account, and when I deal with them I try to keep it on that level.”

Despite Kingsbury’s early success at mentoring such dissimilar talents as Case Keenum in Houston and Johnny Manziel in College Station, handing over a Big 12 program to a first-time head coach under the age of 35 might have caused some pearl clutching but for one other, crucial factor: Kingsbury’s ascension is not an arrival, but a return. He was the starting quarterback of the Red Raiders for three full seasons under Leach (2000-02), a Baugh Trophy winner, and an Academic All-American — and those credentials lend Kingsbury’s hire a kind of local credibility that he hasn’t been alive long enough to earn on the sidelines.

It’s not hard to imagine a hometown hero overwhelmed by the kind of expectations that are bound to be placed on Kingsbury at Tech. But despite his inexperience and the scrutiny he’ll face, he insists he feels less pressure, not more, coming back to Lubbock. “I tell everybody, pressure is being OC at Texas A&M when you used to quarterback at Texas Tech. So being back, where I’m very familiar with this place and what we’re trying to accomplish, I just feel at home.”

And now for the first question on everybody’s mind when an Air Raid cousin comes to town: How y’all gonna score? There are no Johnny Footballs (Johnnys Football?) readily apparent in Tech’s practices, but as Kingsbury shepherds Michael Brewer and Davis Webb through a starting quarterback race, remember that Manziel himself was a late surprise to his own coaches. Receiver depth would seem to indicate that Kingsbury will be pass-happier here than at A&M, but he’s made his way so far by working with what he has at hand. “I think we take a lot of pride in adapting to our personnel. Last year we had one of the best offensive lines I’ve ever seen in college football, and obviously a quarterback who could run, and great backs, and we ended up leading the SEC in rushing, which, nobody would’ve seen that coming at the beginning of the year. But we’ll play to our strengths. When we were at the University of Houston, Case Keenum had a bunch of great receivers, and was great at finding ’em and broke every NCAA record passing. So I’m excited to see what we’ve got at fall camp, and we’ll adjust our offense accordingly.”

And nobody touch those fire extinguishers by the scoreboard. They might be needed again sooner than you imagine.

• This didn’t used to be part of the job. How do guys like Kingsbury prepare guys like Johnny Manziel for having every syllable they utter and every character they type parsed by a ravenous smartphone-armed public? “That’s the million-dollar question. I don’t know if you can, really. I think it’s a thing where he’s got to learn on his own and figure it out. And luckily, Johnny’s a smart kid, very savvy. You let him learn on his own, and you try to guide him as much as you can, but you don’t want to put clamps on him and say, ‘Hey, you gotta do this, you gotta do that.’ I think Coach Sumlin did a great job of letting Johnny be Johnny.”

• Coachspeak has not fully kicked in yet. He already knows better than to divulge his favorite hangout spots in Lubbock (“I don’t want to piss anybody off”), but Kingsbury will confess his favorite road-game destination: “Actually, Kansas State. It’s their fans. They’re pretty choreographed, they do great cheers and chants, and they’re always rowdy. That’s a great atmosphere.” The wait for a coach to go on record saying he likes going to a rival school because their crowds are sparse and leave early, letting his guys work in peace, continues.

• Player to watch: Jakeem Grant. Did consecutive kicks returned for touchdowns last season captivate anybody more than Jakeem himself? Whatever happened, it worked: Kingsbury was wowed by the diminutive sophomore in camp. “I knew he was good, but I was really blown away by how quick and how fast he is, watching him in spring ball. We’re gonna make sure he gets as many catches as he can handle. He’s that dynamic of a player. He had a great spring, and is really becoming a better receiver for us. But he’ll still get his touches on special teams and any other way we can get it to him.”

• This may come as a terrible shock, but we have yet to encounter a coach who envies Mark Helfrich his paint chip selection task. Administrative matters, Kingsbury says, “have taken up a lot more time than I’d thought, but nothing to do with colors of walls. Which is definitely good for me.”

• Get the look. Kingsbury sources those V-neck T-shirts from American Apparel and Urban Outfitters. As one does.

Just got my “Suns up, Guns up” painting finished for my office!! Incredible work by my friend Dave Grizzle. pic.twitter.com/beUyq8P75f

Grantland: What inspired you guys to have this done?

Kingsbury: I just had a big space on my wall, and he had done a smaller thing for me, and I just asked him if he could do an 8-foot-by-5-foot painting, and he said yeah, I’ll knock it out. He showed me some ideas, and I liked the whole “sun’s up, guns up” theme, and so we wanted to portray that, and he did an incredible job. Got it done.

Grantland: What do you remember about that night?

Kingsbury: I was actually here for that game; I was coaching at the University of Houston, and we had a bye week, so I came up. It was pretty much the pinnacle of Texas Tech football as we’d known it, the modern generation, and just to see the fans and the joy and the roll everybody was on was just an awesome feeling

• Mandatory viewing: Is “the entire rest of the Red Raiders’ Big 12 schedule” too vague an assignment? There’s no better conference if you just want to turn on, sit back, and watch the scoreboards light up like pinball machines, and Tech will need touchdowns aplenty to get through consecutive games against West Virginia, Oklahoma, Oklahoma State, Kansas State, and Baylor. We’d pick the Pokes or Bears games for maximum pointsplosion potential.