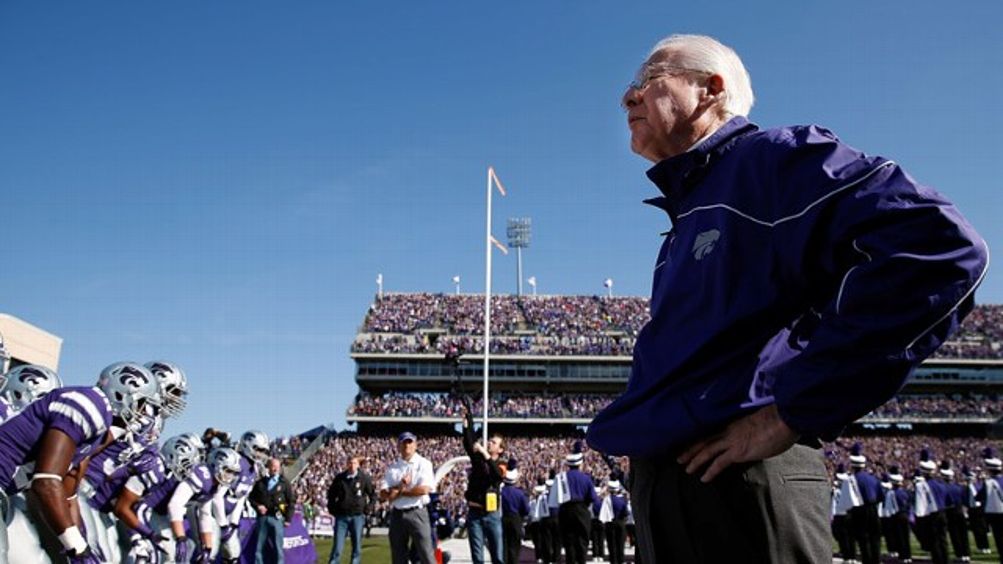 Evening broke clear and brisk on the plains, and Bill Snyder trudged through the tunnel of the stadium that bears his name, wearing an equanimous expression and a purple pullover from last season’s Cotton Bowl game. He kept his postgame speech uncharacteristically short, and when he arrived at his press conference and a reporter in the front row asked if he was so satisfied with his team that he had run out of things to say, Snyder blanched, and then he joked that he was working on his conditioning by moving so fast, and then he made another joke about wishing said reporter had gotten himself stuck in an elevator.

“I’m proud of our guys at this point in time,” he said. “What we do today will define us collectively. Not that I negate what they have done.”

He had yet to take off the pullover, which he has worn for several weeks and which has developed an online following of which I imagine Snyder is blissfully unaware: A couple of days later, someone would ask him a question about style points, and the coach would freely admit that he had no idea what in the world a style point was. His wire-rimmed glasses were perched on a vaguely avian nose, lending him, from the right angle, the look of a learned eagle. He spoke so softly that his voice barely rose above the echo of his own words from the monitor in the back of the room; he used the word “acclimation,” and he alluded to the fact that he’d begun to record his own pregame speeches, which was also a joke (I think). The whole time, he clutched a clear plastic bag in his right hand, as if he’d somehow detoured to a bulk-foods market for caramel creams on his way upstairs.

“You look around the country, and they make more of college football than they do of the presidential election,” he said. “The world is caught up in it, and it’s so easy to lose sight of things.”

Snyder is 73 years old now, and if he appears older than that, it is not just because he speaks like Linus Van Pelt: It is because he has already retired once, and has now rebuilt the Kansas State program twice. From the end of World War II until the mid-1980s, the Wildcats were so bad that no one showed up; the players would go door-to-door selling tickets to a largely empty stadium. Then Snyder came in and the university invested additional money in the program, and these two factors brought about what most agree is the greatest renaissance in the history of college football. Snyder quit after the 2005 season, his successor Ron Prince struggled through three lackluster campaigns, Snyder returned in 2009, and now, after Saturday’s 55-24 blowout of Texas Tech, the Wildcats are on the verge of the best season in school history, ranked no. 2 in the BCS standings with an 8-0 record.

I’m sure many of the reporters who cover Kansas State on a regular basis have become so accustomed to Snyder’s meanderings that these little philosophical digressions don’t even register anymore. They’ve made a big deal this fall in the Little Apple of Manhattan, Kansas, about Snyder’s 16 theses (defined officially as “Goals for Success”), which have become a sort of poetic shorthand to encapsulate the teachings of a coach who thrives on an occasionally inscrutable strain of micromanagement: He once railed against the serving of hard butter, fearing that it would inexorably alter his team’s digestion; he once reportedly became perturbed after the team bus got stuck at a railroad crossing, because he presumed that someone should have checked the train schedule. When he was 28 and coaching at a high school in Indio, California, he tried to hire a hypnotist so he could find a way to compress six hours of sleep into one. (The plan failed.)

On the surface, there is nothing particularly unique about Snyder’s 16 theses, other than the inexplicable fact that there are 16 of them. I have seen variations of such precepts posted on the walls of many locker rooms in many locations around this country, and, in fact, several of the 16 theses seem to overlap — I’m not quite sure what the difference is between “Expect to Win” and “Don’t Accept Losing” — but this is not the point.

The point is that unlike in most locker rooms, his players actually seem to buy into it. The point is that they actually seem to believe in the spirit of this stuff so much that they all kind of talk like their coach. They wear blazers and ties in public; they refer to brotherhood and family; they deliver platitudes that have clearly been drilled into them to the point that they can recite them in their sleep. Some coaches find their edge in an offensive philosophy or a defensive scheme; Snyder’s, at this point, seems based largely on accumulated wisdom.

“Even if the other team makes a big play, the possession is not over until they blow the whistle,” I heard one of his players say, as if reciting from a prayer book.

“Success is fleeting in this world,” another one said. “We’re all susceptible to complacency.” 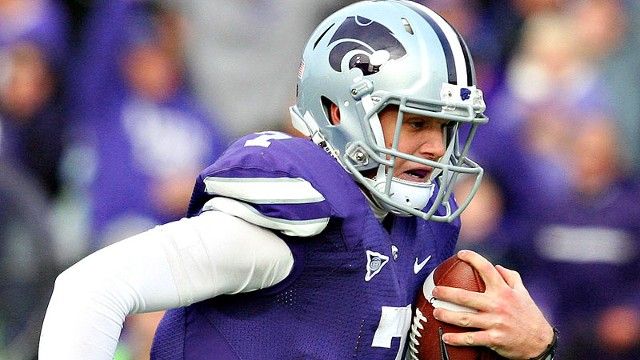 It was Collin Klein who uttered that last statement; as I write this, Klein has become the overwhelming favorite to win the Heisman Trophy, despite an awkward throwing motion that already has most NFL scouts projecting him as a tight end. Klein is actually not a bad passer, even if it looks like he is attempting to hurl a javelin through a windshield, but he is an utterly phenomenal runner; against Texas Tech, he squeezed through tiny windows in the defensive line. With Kansas State leading 20-10 in the third quarter, Klein slipped the football into the bread basket of running back John Hubert on a read option, and then yanked it back out at the last possible second, slipping through a hole that didn’t even appear to exist and outracing several defenders the 16 yards to the end zone. It was the kind of play they will rerun in New York in December, if K-State can find a way to stay undefeated in the Big 12.

It is impossible not to think of Tim Tebow when you watch Klein, who is so Tebow-esque that he even talks like Tebow. “I’m just trying to honor what the Lord has given me,” he said, and when I asked him if he looked up to Tebow, his eyes brightened.

“I admire Tim a lot, and I know what we have most in common is what we love the most, and that’s our faith,” he said. “It’s amazing the journey the Lord has taken us on.”

Snyder says he never really has to give Klein much advice, other than telling him to “Be Collin.” It’s kind of strange to think, in a sport that’s grown increasingly complex in the decades since Snyder first took over at Kansas State, that advice like this could still resonate. I mean, I have no doubt that Snyder’s football knowledge is as deep and varied as that of any coach in the country, but there is a reason why Snyder’s micromanagerial wisdom has proven so successful, and it’s because he is dealing with young men ages 22 and under. They are impressionable, and they yearn for father (or grandfather) figures, and maybe it is easier for Snyder to mold them because Manhattan is so far from everything, so inherently Midwestern that it is hard to think of any college campus that more typifies the region. But whatever the reason, it is impossible to deny that it has worked: When Snyder left, K-State fell off. When he came back, they immediately improved again.

“It’s his blueprint,” said lineman B.J. Finney. “It’s what he believes. Stay focused on what’s at hand. Just be us.”

It is not surprising that all this unprecedented national attention makes Snyder uncomfortable; hence him spending most of that press conference diminishing the cosmic significance of most everything his team has accomplished, and insisting only on the reality of today. For years, he had to peddle a belief in Kansas State when no one else did, pitching the merits of an arid program located in a little town on the plains. And now, as the calendar turns to November, he finds himself faced with the opposite problem: His little empire, careering toward an undefeated season and anchored by a Heisman Trophy favorite, will grow too big to control.

“You could say that about life and all athletics,” he said. “You get one thing fixed, and something else pops up.”

I believe he was speaking about another topic altogether, but the wisdom applies here. It often does.