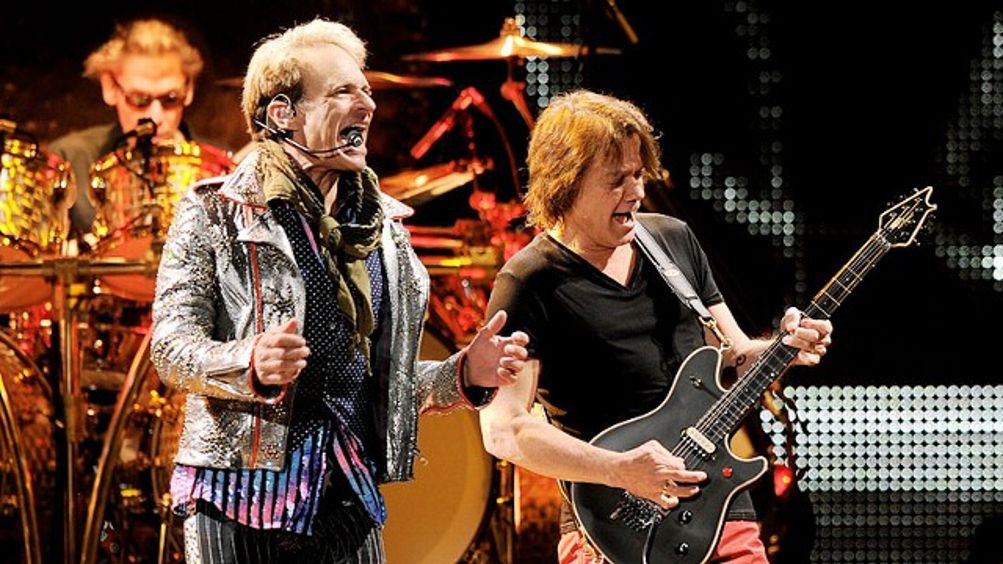 When I saw Van Halen at Café Wha? in January, I was operating from a position of accidental enthusiasm. I didn’t think I was even going to a concert, to be honest; I halfway expected to show up at the venue and find myself sitting through a press conference punctuated by an acoustic rendition of “Me Wise Magic” (or something of that order). But then I realized the band was going to play for real, with actual amps and electricity, in a claustrophobic basement. I got excited. And then they played, and then I got really excited. And then I went home and immediately wrote a 2,000-word review, and then I woke up the next day and realized the review I’d written made absolutely no linear sense, so then I immediately wrote another one, this time with my corpus callosum intact. And then (AND THEN) I kind of stopped thinking about the show entirely. I stopped thinking about the future of the band, or the fact that they were releasing a new album in February. Instead, I spent two weeks listening to old Van Halen albums and returned to my life. I started to wonder if maybe I’d spent more time worrying about Van Halen than any reasonable man should, and if maybe I’d written more sentences about Van Halen than any member of society could possibly need. I thought to myself, Maybe I should just quietly enjoy this music. Maybe this should become an interior process. But then it occurred to me that it doesn’t make a lot of sense to spend my life writing about things I don’t understand when there are things I actually do know about, which obviously includes Van Halen albums.

So … A Different Kind of Truth.

Let me open by saying that this is not a good name for an album. (It’s not a terrible name, but worse than a simple number or a series of numbers and not much better than a combination of numbers and capital letters.) I should also add that I’ve read many reviews of this album and I agree with most of them; in other words, I think this album is better than I expected (and certainly better than most reunion efforts), but not as strong as any of the old Van Halen records I traditionally adore. A Different Kind of Truth is really two EPs: Five (or maybe 5 ½) songs reworked from 1976, and eight (or maybe 7 ½) songs that are new creations. The conventional wisdom suggests the ’76 songs are awesome and the new songs are adequate, and this (of course) is roughly true. What’s most surprising about the fresh songs is how reminiscent they are of David Lee Roth’s solo career: “Blood and Fire” and (the excellent) “You and Your Blues” really belong on 1988’s Skyscraper. “As Is” has an Eat’em and Smile vibe (even the guitar playing). “Tattoo” feels like the third single off A Little Ain’t Enough, and “Stay Frosty” is uncomfortably close to 1998’s DLR Band. I’m not sure how this happened; it’s entirely possible that Roth has more musical ideas (and more force of personality) than most people give him credit for.

I realize everyone wants to compare and contrast A Different Kind of Truth to the rest of VH’s catalog,1 but that’s the wrong prism to employ. The two better metrics are literal (i.e., how the old songs compare to their original incarnations) and hypothetical (i.e., how the new songs compare with whatever one imagined they had the potential to be). First, the old stuff: The tracks sound good, but not as good as the ’76 demos. This is not because the band got worse; in most ways, they got better. But modern albums don’t sound the way they did in 1976, and particularly not recordings that were produced as cheaply as that 10-track demo. The most crucial aspect of Van Halen — more than the virtuosity or the attitude or the cocaine — is Eddie Van Halen’s guitar tone. It’s the most jarringly singular post-Hendrix guitar tone anyone has ever produced (EVH calls this the “brown sound,” which never seemed accurate to me … but it’s his sound to name). The finest Eddie Van Halen tones are found on 1978’s Van Halen, 1979’s Van Halen II, and those ’76 demos (now referred to as “Van Halen Zero” in bootleg circles). The fact that he can still shred is secondary. Rolling Stone critic and Grantland contributor Jon Dolan once told me that the core problem with Eddie Van Halen was that his solos were “way too Astroturf,” and I begrudgingly understand what he means — at times, there is an inflexible, synthetic aftertaste to all the finger-tapping and pinballing. Either by accident or on purpose, Eddie galvanized the universal belief in metal circles that playing fast was the only way to prove you were playing well (a collective assumption that lasted from the summer of ’79 until the advent of Slash). Sometimes his competence is repetitive. But his leads are almost always propulsive, and you can’t really criticize his tone; the only thing you can say is that sometimes that tone is better and sometimes that tone is worse. And it was better in ’76 (at least to me). It was better when it was analog. I also find the group’s decision to change the lyrics on those old songs a little ridiculous. Why turn a song called “Big Trouble” into “Big River”? What is the purpose of twisting the phrase “Put Out the Lights” into “Beats Workin'”? Such adjustments aren’t a crime (obviously), and the band can do whatever they want (obviously). But it’s clearly not fooling anyone, and it raises a lot of unnecessary questions. For example, they did not change the title of “She’s the Woman”. Is this because that particular message is somehow more meaningful, or is it because the phrase “She’s the Phantom” never occurred to anyone in the studio?

Which brings us to the new stuff … It’s not MJ with the White Sox, but it’s MJ with the Wizards at the end of a six-game road trip.

Still, it must be said: These are competitive songs. They’re loose, effortlessly heavy, and better than anything the band has made since “Cabo Wabo.” I suppose some will argue it’s cheating to rely on old stuff, but that makes no sense. Is there anyone on the planet who feels Eddie Van Halen isn’t inventive enough? This is not something that needs validation.

Which brings us to the new stuff.

It’s not great. That doesn’t mean it’s awful or humiliating or anything to get upset about — it just means that none of this new material is within the airspace of “Panama.” It’s not MJ with the White Sox, but it’s MJ with the Wizards at the end of a six-game road trip. The playing is tight, because Van Halen would never release an album that wasn’t hyper-professional. But a song like “Honeybabysweetiedoll” is just overstuffed with notes. It’s more impressive than enjoyable. This is my theory: When Sammy Hagar wrote his autobiography and described Eddie and Alex Van Halen as broken, booze-filled corpses (he compared EVH’s home with Valerie Bertinelli to the mansion from Grey Gardens), it motivated Eddie to get clean and re-crush society. The power of spite fueled his desire to prove he was still Godzilla. And — to his credit — he does seem totally recovered. The intro on “China Town” is like a condensed, economical version of the opening to “Mean Streets.” So why don’t I like it more than I do? Probably because it actually is what it sounds like — a condensed, economical, conscious replication of something that used to be an organic extension of his genius. It’s no one’s fault. Eventually, everyone becomes who they always were.

As for the rest of the group: Wolfie Van Halen gets an “A” and Alex Van Halen gets an
“A-,” but only because we’re grading on a curve and AVH has never performed poorly on any song I’ve ever heard. Roth’s effort is tougher to quantify. Whenever you write about Dave, there’s always an unspoken responsibility to note his “limitations as a vocalist,” but that misses the point. That’s an issue for American Idol. Gary Cherone had very few “vocal limitations,” and nobody in North America likes Van Halen III. Nobody likes John Corabi more than Vince Neil or Steelheart more than Hole or Stick It To Ya more than Powerage. Roth sounds the way the singer from Van Halen is supposed to sound, so he only competes with himself. He is, as we’re all well aware, exceptionally adroit at talking over the breakdown. Sometimes he can be self-indulgent, although that’s kind of like accusing Newt Gingrich of being too political. To a degree, Dave gets a lifetime pass just for proving that humans like himself can exist in reality. The only way he could ruin a Van Halen album would be by not participating.

I’ll be as straightforward as I possibly can: I don’t know what I’m trying to express here. My feelings are mixed to the point of being meshed. Going into A Different Kind of Truth, I unconsciously suspected my takeaway would be, “This is a bad album, but I love it nonetheless.” My actual sentiment is closer to, “This is a good album, but I just don’t like it, no matter how much I try.” And I’m disappointed in myself for feeling that way, somehow, which only proves that the things I understand most will always confuse me forever.