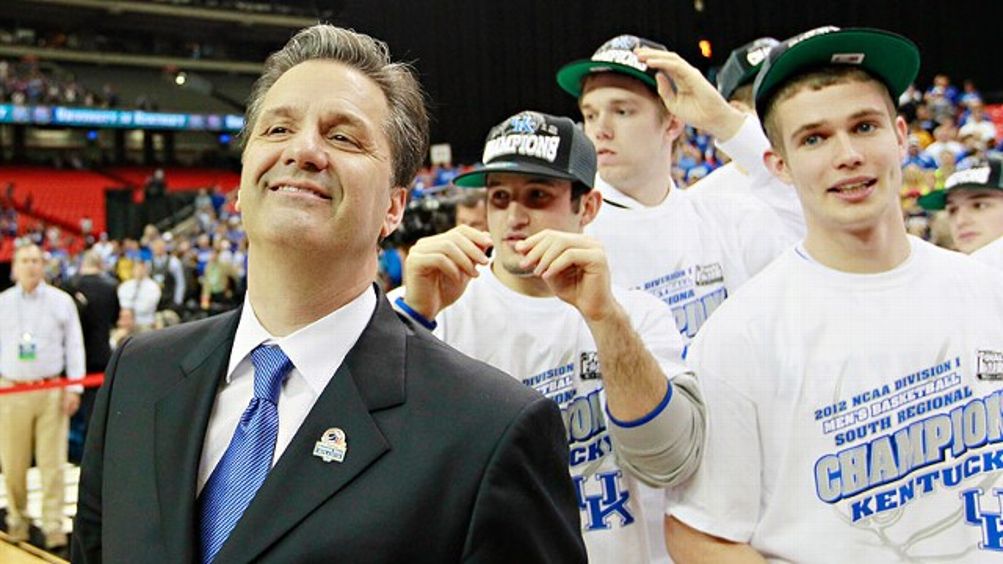 Kentucky might lose this weekend. Better teams than the Wildcats (UNLV in ’91, Georgetown in ’85, UCLA in ’74) have lost in the season’s last weekend, and college basketball is built for meaningful, memorable upsets. But if this happens, I will be shocked. I would be less surprised if they beat Louisville by 15 and Kansas by 20. Jayhawk Thomas Robinson is usually described as the best player in the country, but Anthony Davis is already better (and improving in real time, right in front of our eyes). He’ll go no. 1 in the NBA draft. Michael Kidd-Gilchrist might be the second pick. Every guy Kentucky puts on the floor looks like some version of a pro: They’re all highly skilled and weirdly unselfish. It’s not unfair, but it feels that way. So I expect Kentucky to crush everyone. I expect them to win for entirely predictable reasons. But then I will sit in my dark living room on Monday night and wonder: What happens now?

I’m not going to take any shots at John Calipari, because I’m starting to think he’s a pretty decent dude. When CBS interviewed Calipari and Davis the day after the Cats obliterated Indiana in the South Regional, they displayed a rapport that suggests Calipari is simply unlike the vast majority of men who spend their adult lives screaming at 19-year-olds for failing to box out. What makes him different, I suspect, is that he cares about “young people” more than he cares about The Game Of Basketball. And that’s a deceptively complex perspective.

I’m sure every coach in America would claim they care more about their individual players than about the sport itself, because it seems draconian to place a game above a human. Yet part of the lesson of sports (or at least what we always tell children) is that individuals must subjugate themselves to the team — and not just to win, but to show some level of amorphous “respect” for the game itself. I’m not sure I still believe this, or even if I ever believed it at all. But I do know that people who devote their lives to basketball tend to value it in a manner that transcends the involvement of all those who participate temporarily. In the specific, it’s easy to view Anthony Davis as more important than a random SEC game; in the abstract, whoever plays power forward for Kentucky is really just another impermanent pawn, contributing to a physical art form that will exist long after the death of everyone reading this column. If you love basketball, part of your mind (conflicted though it may be) needs to recognize and understand that kind of philosophical invention. But Calipari does not think that way, and that’s why guys like Bob Knight won’t even utter his name in public. Somehow, he’s both a good person and an amoral contrarian. He’s more important than he probably realizes.

Calipari has professionalized college sports,1 which is great for him and good for his recruits. It’s just discomforting for anyone who likes NCAA basketball, assuming they’re drawn to the same game that lives within their memory. He’s built awesome teams for seven consecutive seasons, usually by overhauling his entire roster with transitory superstars who are only attending college because there’s no reasonable alternative. He’s completely up-front about this strategy, and it’s irrefutably effective. In his three years at Kentucky, he’s never lost a home game. But here’s the rub: Every season, something goes wrong at the end — and that validates his critics. While coaching Memphis in the 2008 final, Calipari had the superior squad, but they couldn’t make free throws and lost in OT.2 At Kentucky in 2010, he had an obscene collection of talent (four of his starters went in the first round of the draft), but they self-destructed in the clutch, just as everyone who hates Calipari always insisted they would.3 It’s like there’s this indefinable weakness to his system that everyone4 hopes will eventually emerge; somehow, we want to believe that the way Calipari conducts business is intangibly doomed (because that reinforces the traditional view of what team sports are supposed to represent). It’s not unlike the way most NBA observers are predisposed to root against the Miami Heat: You should not be able to succeed in this way. You should not be able to arbitrarily construct a Super Team that automatically achieves Super Greatness. It cheapens the experience. It feels cold and uncreative. That’s why traditionalists are always relieved when Calipari’s template collapses: It suggests there’s some inherent flaw to his philosophy that even he cannot see. It balances the system.

But not this time.

If Kentucky is simultaneously the most straightforward finishing school for future professionals and the best place to win a national championship, there’s no reason for a blue-chip high school senior to go anywhere else.

It does not appear that Kentucky will lose a game by choking at the line (they made 35 of 37 versus Indiana) or by imploding in the closing minutes (oddly, they inevitably seem more mature than the veterans they face). They play prison-yard defense and swing the rock. Anything is possible in a single-elimination tournament, but these Wildcats looks less prone to self-induced injury. So let’s assume Kentucky succeeds. Let’s assume they rampage through their final two games. It will disprove a lot of lingering suspicions about what does (and doesn’t) work. It will mean that winning a title with freshmen and sophomores is not only plausible, but logical and inarguable. That realization will knock the system out of balance. Right now, there are always two foolproof arguments against the Calipari ideal — it reflects badly on the university, and it breaks down in moments that matter most. No one is going to emulate a program with a bad reputation if the end result is the same as doing things the way they’ve always been done. But that argument evaporates the moment Calipari climbs a ladder and cuts a net. If Kentucky is simultaneously the most straightforward finishing school for future professionals and the best place to win a national championship, there’s no reason for a blue-chip high school senior to go anywhere else. Calipari will dynastically dominate with a revolving door of sheer horsepower, and the only way other schools will be able to respond is by becoming exactly like him.

Now, I’m not suggesting that every single college will turn into a clone of Kentucky, because that’s impossible. There aren’t enough good players in America for that to happen. But Calipari’s scheme will become standard at a handful of universities where losing at basketball is unacceptable: North Carolina, Syracuse, Kansas, UCLA, and maybe even Duke. These schools already recruit one-and-done freshmen, but they’ll have to go further; they’ll have to be as transparent about their motives as Calipari is (because transparency is the obsession of modernity). If they resist, they will fade. And the result will be a radical amplification of what the game has already become: There will be five schools sharing the 25 best players in the country, and all the lesser programs will kill each other for the right to lose to those five schools in the Sweet 16. It will skew the competitive balance of major conferences and split D-I basketball into two completely unequal tiers. Final Four games will look more and more like sloppy pro games, and national interest in college basketball will wane (even if the level of play technically increases).5 In 10 years, it might be a niche sport for people like me — people who can’t get over the past.

Kentucky totally deserves to win. But I sure hope they don’t.