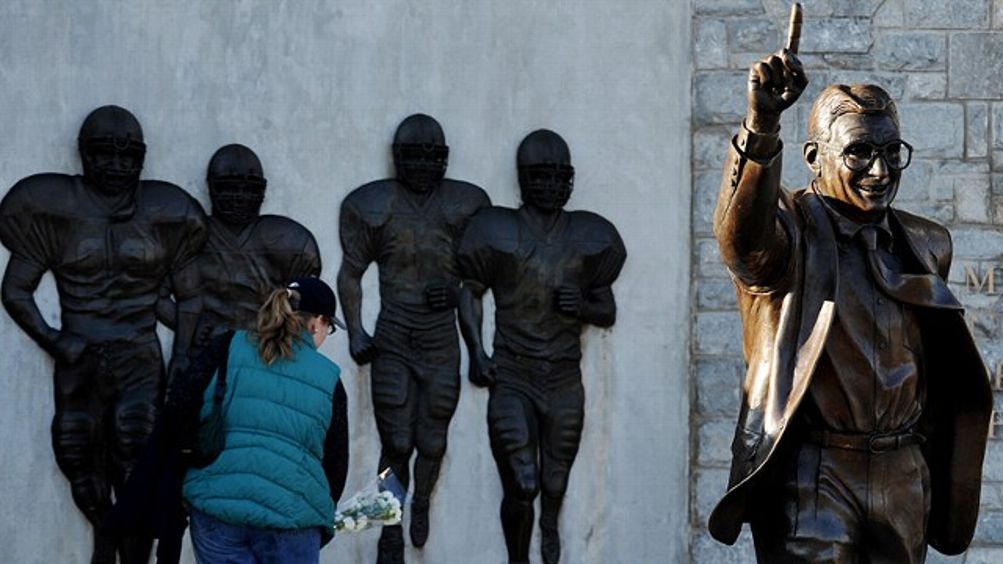 Last November, as the worst month in my alma mater’s history unfolded, a Penn State medical-school researcher named Craig Meyers went on the radio to detail a remarkable scientific discovery: He had discovered a potential cure for cancer. It went largely unnoticed, because Craig Meyers is a scientist and because no one associated with Penn State gave a good goddamn about science in that moment, because they were enveloped by football.

That’s what we are left with now that former FBI director Louis Freeh’s damning independent report on Penn State has been released: It is everything the lawyers and flacks and message-board apologists assured us it wasn’t. It is a football scandal, it is a Penn State scandal, and it is a fundamental violation of the very Grand Experiment — of the balance between academics and athletics, of the notion that football can elevate a university rather than weigh it down, of the idea that men like Craig Meyers benefit from men like Joe Paterno — that the school had espoused since the 1960s. It is a betrayal of every academic advancement Penn State has made since Paterno became its head coach; it is a betrayal of all of us who came of age within Paterno’s sphere of influence; and it is a betrayal, most of all, of those abused children who grew up as my neighbors, and who were ignored and then abandoned by their elders in apparent deference to the abuser himself.

Taking into account the available witness statements and evidence, the Special Investigative Counsel finds that it is more reasonable to conclude, that, in order to avoid the consequences of bad publicity, the most powerful leaders at the University — Spanier, Schultz, Paterno and Curley — repeatedly concealed critical facts relating to Sandusky’s child abuse from authorities, the University’s Board of Trustees, the Penn State community, and the public at large.

It would be easy for me to say now that I saw this coming, that the mythologizing of Joe Paterno in the town where I grew up always made me a little uneasy, that I had grown increasingly skeptical of the Grand Experiment as Paterno clung to his job long after it appeared to be time for him to let go. But this is not entirely true. Because my doubt was always outweighed by the notion that the people in charge, as distasteful as their treatment of the media might be, as much as they battled against transparency and disclosure and open records, had the best interests of Penn State at heart.

• Weinreb: Returning Home After the Scandal

• Weinreb on The Herd With Colin Cowherd

This was my fundamental mistake. This was our mistake, as a community. The Grand Experiment began as a sales pitch, as a way for Paterno to elevate the standards of the university he loved by using football as the lure. And then at some point, the lure outweighed the catch, and the sales pitch drove motivations, and we were too myopic to see it. At some point, the little white lies that Paterno hid behind — that he would retire after five more years, that Bowling Green was, in fact, a formidable opponent, that the culture of football was in no way segregated from the culture of the university at large — ballooned into this, into a lie so unthinkable that it takes your breath away.

I realize that, in the upcoming days and weeks and months, the focus will be on Paterno, because he was the face, and because he is the only one of these four “powerful leaders” Freeh mentions who has a statue in his likeness. But I couldn’t care less about Paterno’s legacy right now, and I couldn’t care less whether that statue stays or goes. For me, this extends far beyond a single cult of personality. For me, this is now and has always been about the legacy of the institution, about a university I grew up around, a university where I met some of my best friends, a university that I hold a degree from and return to several times a year. There are four men who betrayed this legacy, and I hold them all equally responsible. Beyond the egregious and irreparable damage to those children, I hold them accountable for a betrayal of the people who raised me: My father, who has spent 35 years at Penn State conducting arcane organic chemistry research and teaching a generation of premed students; my mother, who spent two decades working at the university library, a wing of which now bears Paterno’s name. My parents gave themselves to this university, as so many others did, and this university failed them, and instead of confronting their failures, the men in charge chose to “hope it is now behind us.”1 They made this a Penn State scandal. In so doing, they cheapened everything my alma mater ever purported to stand for, and that is unforgivable.

It is absurd, of course, to presume that the work of a cancer researcher will ever win more public attention than the exploits of a football team. Society is not structured that way, and the beauty of the Grand Experiment is that it seemed built to work around that flaw, to use football to impact the greater good. It is clear now that the most powerful leaders at my university perverted that cause, and if it takes a temporary shutdown or de-emphasis of the program to right that wrong, those of us whose primary concern is the integrity of this university we held dear will accept that. Anyone who doesn’t — and anyone who is more concerned with the lasting legacy of a football coach than that of the institution itself — is just furthering the lie. The Grand Experiment is a failure, and the entire laboratory is contaminated, and there is no choice but to go back and start all over again.