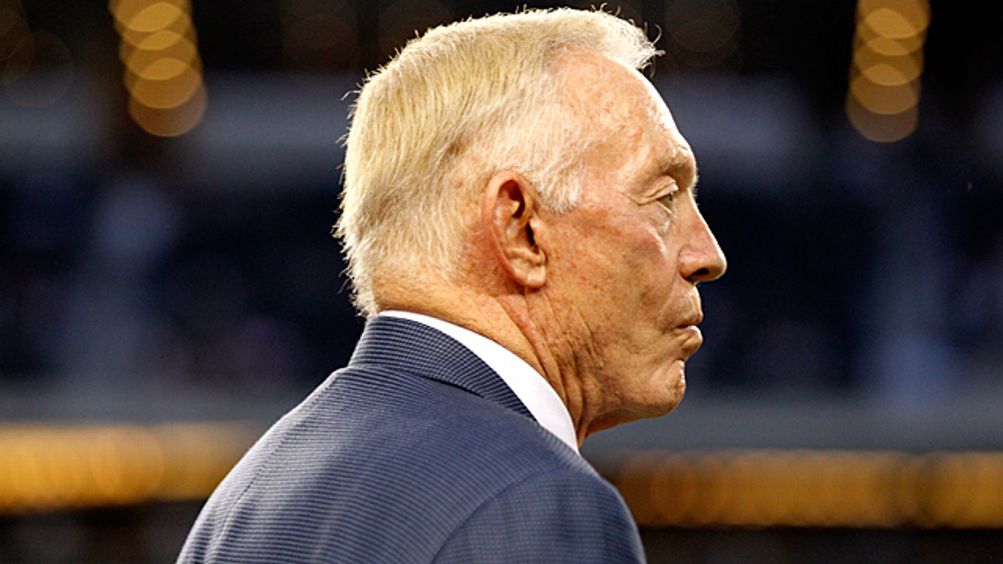 Here at the start of Week 5, Dallas Cowboys fans have reached a crossroads. We could keep watching Tony Romo and the Cowboys players. Or we could turn our undivided attention to Jerry Jones, the Cowboys owner. Let’s break down the matchup:

The actual Cowboys: Figure lots of humiliating losses like Monday night’s 34-18 rout, lots of sacks through the middle of the porous offensive line, and the same constant state of terror Romo feels when a ball is sailing toward Dez Bryant’s hands.

In Week 1, Jones was sitting in a box at MetLife Stadium while his son-in-law, Shy Anderson, cleaned his glasses. NBC cameras caught the tender act of subservience. With a less self-confident millionaire, it would rate as an embarrassment. With Jones, it was a chance to market Jerry Wipes microfiber cloths for $2.99.1

On TV, we Jerry Watchers were rewarded with the sight of Jones rapping. Actually, in an ad for Papa John’s, Jones did a white man’s rap parody that even the ad agencies abandoned in the early 1990s. (“Yo, it lights me up like a Roman candle / toppings and flavors almost too good to handle.”) Rappin’ Jerry was a sequel to Papa John’s ads featuring Dancin’ Jerry (doing his version of The Urkel) and Coachin’ Jerry (toying with the idea that was once every Cowboys fan’s worst nightmare). I’d include Negotiatin’ Jerry in this list, but that ad was for Pizza Hut.

Jones starred in a Monday Night Football commercial alongside Rob Gronkowski and Darrelle Revis. It’s no real surprise anymore that Jones would be cast in the spot instead of his players. Nor that Jones — instead of, say, Jim Irsay — would get a call to make a cameo on FX’s The League.

Jones has also played life coach. He imposed a set of rules on Dez Bryant, who was arrested for allegedly assaulting his mother in the offseason,2 that included a midnight curfew, no alcohol, and no strip clubs. Jones made news on the web. In a rare cheapskate moment, he lost out on the domain name for Cowboys.com, letting it become a dating site for small-c cowboys and the men who love them.

If we turn back the clock to April 26, Jones was (again) the star of the NFL draft, trading multiple picks for cornerback Morris Claiborne. Before Monday’s loss to the Bears, he opened a Victoria’s Secret PINK store inside Cowboys Stadium that has “lace-trimmed hipster panties” in its catalog.

Look, as a Cowboys fan, I’d rather watch the actual team. Yet it’s Jones who commands our attention. Through his spasmodic performance art, you can sense a cultural transformation taking place. Listen to Jerry — he explained it himself in the offseason.

I want me some glory hole!” Jones declared at a July press conference.

As soon as those words escaped his mouth, Cowboys PR man Rich Dalrymple stepped in and explained that Jones was using a term from his former career as an oilman. What he meant — to quote yet another Papa John’s commercial — was: “I’ve tasted greatness and I’m hungry for it again.”

But the slip was revealing, because Jones was signaling a shift that he — along with Mark Cuban, T. Boone Pickens, and others — has accomplished. When we used to talk about an utterly shameless, super-rich, “larger than life” Texan, we talked about an oilman. Now, we’re more likely talking about the owner of a sports franchise. J.R. has given way to J.J. The Texas sports owner is the new über-Texan, the man who embodies the state’s gonzo mythology.

In his book The Big Rich, Bryan Burrough marks off 1986 as the end of the decades-long reign of Texas’s “Big Four” oil families. But if Burrough was worried wheeler-dealers were being “replaced by a faceless plutocracy … somehow lacking some of that boisterous Texas joie de vivre,” he needn’t have been. In the winter of 1989, Jerry Jones bought the Dallas Cowboys.

The NFL had oilman owners before, like the Cowboys’ Clint Murchison Jr. and the Chiefs’ Lamar Hunt; in baseball, a wildcatter named George W. Bush owned the Rangers. But Murchison and Hunt and Bush inherited their first bundle and never had to scrape together a fortune. At age 23, Jones, the son of an Arkansas grocer, was juggling loan interest that totaled $100,000 annually, Jim Dent reports in his biography, King of the Cowboys. By the early ’70s, he struck oil on a tract of northwest Oklahoma land on which drillers had given up. Later, he switched to gas drilling, avoiding a plunge in the oil market and swelling his fortune into hundreds of millions.

His deal to buy the Cowboys — from another oilman, H.R. “Bum” Bright — was drawn up on a napkin.3 In the deal, Jones emptied his bank accounts and said, “I came in here with the purpose of rolling the dice.”

As an NFL owner, Jones has styled himself as an oilman. For example, in the 20th century, the oilman was the new-money nemesis to the dons of the Eastern establishment. When he got to the NFL, Jones pissed off “old guard” owners like the Maras and the Rooneys and Art Modell.

Part of the oilman’s mythos was that he went all-in on a hunch. Jones’s hunches have included dealing Herschel Walker for seven draft picks in 1989, and mortgaging drafts for Joey Galloway, Roy Williams, and Claiborne.

An oilman distrusts authority. Lately, Jones and Dan Snyder have been the only owners to challenge Roger Goodell. The commissioner penalized Dallas and Washington for spending too much money in an allegedly capless year, a decision that may still pulverize the NFL cartel. Jones has always fashioned himself as a more presentable Al Davis. In 1995, he negotiated his own soft-drink deal with Pepsi, snubbing Paul Tagliabue and the league-wide contract with Coke. At a press conference announcing the deal, Joe Nick Patoski notes in a new history of the Cowboys, Jones kicked a bottle of Coke to make his point.

Although oilmen ranged from whiskey-swillers to ascetics (sometimes over the course of the same lifetime), their capacity for partying was exemplified by the legendary 1949 bash at Houston’s Shamrock Hotel. Jones, too, threw enormous Super Bowl parties after his victories in the 1990s. Even now, a few weeks shy of his 70th birthday, it’s not uncommon to find a slurry Jones in Vegas holding forth on Tim Tebow.

H.L. Hunt & Co. didn’t just want the best of everything — they wanted the biggest. Hunt built a Dallas mansion he humbly called “Mount Vernon.” Cowboys Stadium, which opened in 2009, is a sports version of the oil palaces — with a price tag of $1.2 billion and one of the largest HD big-screens anywhere.

To offset their gaucherie, oilmen also packed their mansions with expensive artwork. “I kept thinking,” one millionaire oilman said, according to Burrough, “what if I could have, in Dallas, Texas, a collection of art that might be considered a tiny Prado?”

Jones, too, got him some artwork. For Cowboys Stadium, he commissioned pieces like Coin Toss, star, and, outside the owner’s club, Cheering Crowd, a canvas that the team says “captures the sensation of losing one’s self in a crowd only to find yourself as a part of something bigger, more powerful, and profound.” The urge to decorate something profane with something profound is very oilman.

As a fellow New Oilman, Mark Cuban gambles, thinks big, and distrusts authority. (Cuban might distrust authority more than anyone in the universe.) While not a franchise owner, T. Boone Pickens — a Dallas billionaire who made his fortune in oil and leveraged buyouts — now exercises his wildcatting through sports. He ponied up $165 million in a single donation to his alma mater, Oklahoma State, explaining, “I quit coming to homecoming games because we got beat.”

Cuban and Pickens embody another strain of the oilman ethos: political idealism. Despite his billions, H.L. Hunt was moved to self-publish a utopian novel, Alpaca. Cuban blogs about Wall Street, politics, and sportswriting ethics, while Pickens has promised to end all contributions to Okie State if the school ever gets caught violating NCAA rules.

The New Oilmen are useful to Texas. For one thing, they’re famous. For another, they keep alive the old notion that Texans are different from other Americans. As a Texan, I’m not sure this was ever true. But the New Oilmen make us think that Texans are not only different but also — in an interesting way — more fully realized.

This is probably a good place to note that Cuban has an NBA title, and Pickens has a Fiesta Bowl ring. Yet Jones’s team — as no one needs reminding after Monday night — sucks. I think that’s what’s so strange about watching Jones hawk Jerry Wipes or rap on TV. Oilman swagger without success feels as odd as, well, the Dallas reboot.

Swagger is all Jones has. Cowboys Stadium leads the league in attendance, but since its opening, the Cowboys’ home record is a mediocre 14-12. Forbes estimates the team is worth $2.1 billion, making it the second-most valuable sports franchise in the world, just behind Manchester United. Yet the Cowboys have won one playoff game in 15 seasons — five fewer games than the Saints. We watch Jerry Jones because his life is a glory hole well. His roster, his front office, and his coaching staff are the dry ones.