All-Star Behind the Scenes 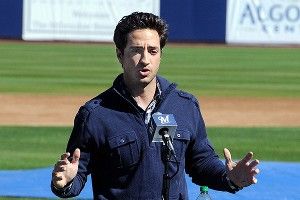 The system, we are told, worked. That’s always the second-last refuge of scoundrels. The system, we were told after the Watergate scandal, had “worked,” even though it hadn’t, not fully. The system had been truncated by a cheap political pardon, thereby allowing the main miscreant to spend 25 years walking on the beach, fashioning his own myth of persecution and redemption. In the case of Ryan Braun, whose suspension for allegedly taking one of those drugs of which baseball disapproves was overturned by an arbitrator last week, the “system” did not “work” because there should never have been a system in the first place, and Braun does not have his own San Clemente in which to hide. He will have to go out in public at least 162 times this year and own somebody else’s dreadful mistakes. I do not envy him that job.

A case like Braun’s was the inevitable outcome of what Scott Lemieux of the invaluable Lawyers, Guns, and Money blog calls baseball’s “War on (Some Classes of People Who Use Some) Drugs.” From its very beginnings, the “war” on performance-enhancing drugs in sports, and especially in baseball, has been legally questionable, morally incoherent, and recklessly dependent on collateral damage to make its point. Long ago, I went over to the purely libertarian position on this question simply because any other solution seemed to me to be incompatible with civil liberties and an equitable sharing of power in the workplace — and because every other “war” on drugs that I’d seen had been an enormous waste of time, money, and manpower.

There always have seemed to me to be two main arguments against this position. The first is the question of the player’s health. This is not one to be dismissed lightly, even though, in almost every other context in professional sports, it is always secondary to profits in the mind of management. And the second, more hazy argument is that it is somehow unethical to ingest a substance that will make you play better. Too often, it seems, the former consideration is used to camouflage arguments based primarily on the latter.

The health consideration is doomed to failure in the long run because, well, Science Marches On. Sooner or later, someone’s going to invent a substance that enhances performance without any risk to the athlete involved. The reason this will happen is because whoever invents the stuff is going to get wealthy beyond Warren Buffett’s wildest dreams. Eliminate the health-of-the-athlete fig leaf and all you’re left with is the moral and ethical argument and, on its own, that falls apart with the slightest nudge.

Can someone seriously argue that it is ethical to take a drug to make a performance possible, but unethical to take a drug that makes that performance better? Isn’t making a performance possible at all the ultimate performance enhancement? If there had been a drug that would have given us five more seasons of Sandy Koufax at the top of his game, how would that have been a bad thing, everything else being equal? Sports are rife with drugs. Without drugs of one sort or another, the NFL season would never begin, and the baseball season would end sometime in June owing to a lack of participating teams.

Now we have Ryan Braun’s experience with the “system,” and nobody can be surprised that his urine was badly handled. And, by the way, let’s stop calling it “the sample,” too, OK? That’s misdirection by euphemism, and it works to hide the personal violation that mandatory drug testing truly is. Ryan Braun had to give baseball some urine, and the baseball official tasked with handling Ryan Braun’s urine kept Ryan Braun’s urine in his freezer for 44 hours, which is a long time to keep someone else’s urine, to my way of thinking.

It can’t have surprised anyone who’s watched the casual way constitutional safeguards have been generally tossed aside in drug cases over the past 30-odd years. It can’t have surprised anyone who’s read the revelations about how the criminal justice system has been perverted by bungling crime labs and incompetent medical examiners. (Here in Massachusetts, we are rather the home office of the latter problem.) Ultimately, in any authoritarian solution, the people with the power get lazy, and stupid, and they start making enough mistakes that people get tired of living with them. It’s one of the reasons we don’t have East Germany anymore. And baseball always has had a sweet tooth for the authoritarian solution.

Translation: “The guy who hung on to Ryan Braun’s urine for 44 hours did nothing wrong because our instructions were written by half-bright marmosets. We are now on a nationwide search to find smarter marmosets.”

Until the late 1960s, baseball’s fundamental economic structure depended upon the authoritarian device known as the reserve clause. In the 1980s, it engaged in the authoritarian — and monumentally stupid — collusion strategy to regain the control of its players that it had lost to courts and to arbitrators. It maintained its authoritarian attitude toward racial segregation for longer in its history than any other sport. (That was the direct result of baseball’s hiring as its first commissioner Kenesaw Mountain Landis, who was so enamored of issuing authoritarian dictums from the bench that, as Tim Weiner points out in his excellent history of the FBI, some anarchists sent him a bomb through the mail. And that was before he demanded — and got — dictatorial powers from the baseball owners and authored his own authoritarian solution to the problem of the Black Sox.)

Indeed, looked at from a different perspective, the people who look to baseball because they yearn for constancy in a changing and accelerated world are expressing little more than what Lewis Lapham calls, in a different context, “the wish for kings.”

The steroid frenzy is of a sad piece with this history. It began, as all drug frenzies do, with a series of scare stories guaranteed to terrify the rubes. Then came the rush to pass laws and regulations without really thinking them through because this was The Greatest Crisis There Absolutely Ever Was. Then came all the people who made careers out of the laws and regulations prompted by the original frenzy. Then came all the reporters and commentators who got rich enabling the people most directly profiting from the frenzy and/or being professionally outraged on behalf of “the fans” but, really, only expressing their own anger at not being allowed to be 14 years old anymore.

You could hear it all again over the weekend. Major League Baseball was crying doom to anyone who would listen. Rob Manfred, MLB’s president of labor relations, took refuge in outraged bafflegab.

Translated from the original Bureaucrat, this reads, “The guy who hung on to Ryan Braun’s urine for 44 hours did nothing wrong because our instructions were written by half-bright marmosets. We are now on a nationwide search to find smarter marmosets.”

The “war” on steroids always has been Kafka rewritten by Lewis Carroll. It is always going to have victims like Ryan Braun — or, worse, some player is guaranteed one day to be the victim of a demonstrably false positive result — because that is the nature of all authoritarian solutions. Once, when Mick Jagger and Keith Richards received preposterously heavy sentences after being busted for pot, a British newspaper thundered in response, “Who breaks a butterfly on a wheel?” New butterflies, same old wheel.