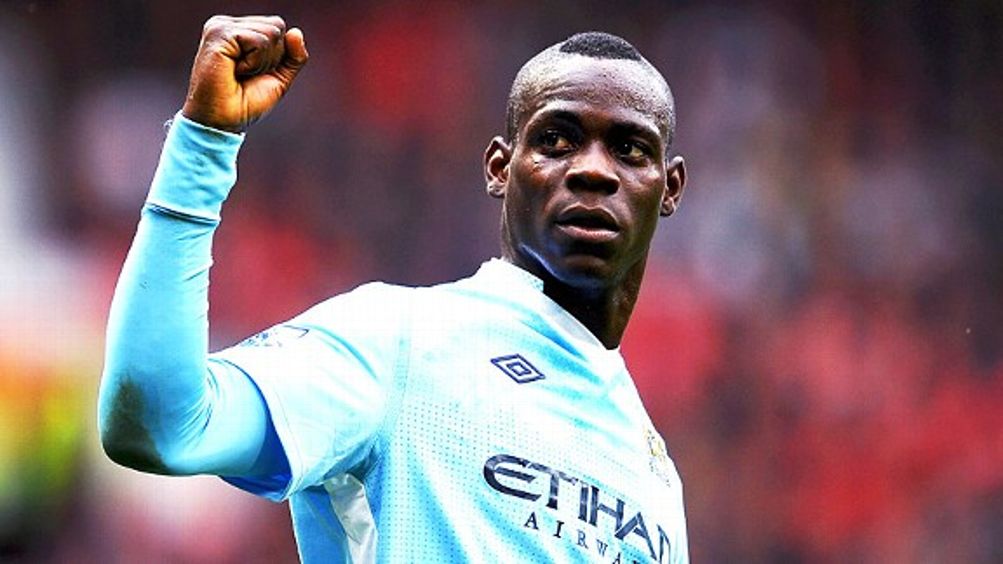 Sometime during the early morning of October 22, around the moment when the first reports started appearing on the Internet, Mario Balotelli ceased to exist. The headlines that caused his sudden dematerialization were, for the most part, surprisingly restrained, especially for the British press. You could even call them tasteful. “Mario Balotelli rescued by fire brigade after setting his house alight with fireworks,” the Mirror murmured. “Mario Balotelli’s house set on fire as he shoots fireworks from window,” the Guardian agreed. Maybe the copy editors were struggling just to fit in all the facts — none of them even alluded to the best detail of all, which was that the fireworks that ignited Balotelli’s mansion had been launched from the bathroom window. Or maybe the basic outline was weird enough that not even the tabloids needed to dress it up.

Either way, by the time the story had been digested by the international soccer public — meaning about 30 seconds after it first landed on Twitter — Balotelli was gone. He hadn’t died or skipped town, nothing as dramatic as that. Instead, Mario Balotelli, troubled but talented young striker for Manchester City, had been replaced by MARIO BALOTELLI!!, lurid media construct and certified sports lunatic. There’s not really a word for this role, but it’s a familiar part of modern sports culture. Somewhere on earth there is a human being named Mike Tyson, but the dude who wrestles forests and eats hood ornaments,1 the guy you and I click on whenever his name floats up out of the mists, has long since become MIKE TYSON!! And that was the transfiguration Balotelli underwent the moment the fire trucks rolled up.

Whether that’s fair or not, if you follow soccer, you know MARIO BALOTELLI!! has been developing for a while. Balotelli has produced his share of run-of-the-mill controversy ever since he was a teenager at Inter — he clashed with Jose Mourinho, was criticized for diving, and so on. But he’s also produced moments of genuinely breathtaking, what-is-this-kid-smoking controversy, moments that suggested that MARIO BALOTELLI!! was only a matter of time. He went on Italian TV wearing the jersey of Inter’s hated crosstown rival, A.C. Milan.2 He openly refused to apply himself in practice, to the point that his own agent attacked him in the press. He did things to his hair that suggested either terrible secret pain or defective contact lenses.3 At one point, after he’d flung his shirt to the pitch in disgust after being substituted in a Champions League game, a group of his own fans tried to assault him in the parking lot.

You can only generate so much cartoon publicity before people start to see you as a cartoon, and Balotelli, who’s all of 21, reached the threshold in July during a friendly match against the LA Galaxy. With Manchester City leading 1-0 in the 32nd minute, Balotelli ran onto a clever pass from David Silva that left him one-on-one against the goalkeeper. Rather than trying a straight-ahead shot, Balotelli decided to showboat, doing a full pirouette and trying to clip in a flamboyant backheel. Which — and this probably affected the firestorm that followed as much as the attempt itself did — he missed. The crowd booed,4 the announcers started ranting about how disrespectful the backheel was to the Galaxy, and Balotelli’s enraged manager, Roberto Mancini, yanked him out of the game. For the next few days, people who like getting mad about sports got mad, and only a tiny minority of fans on the Internet were left to ask, in their squeakiest little Oliver Twist voices, whether trying to do something entertaining in a meaningless friendly was really so horribly vile.

Take the guy who figured in all those stories and let him almost burn his house down by launching fireworks indoors, and yeah, it won’t be especially surprising if the world concludes that everything he does is automatically insane and hilarious. Balotelli confirmed the impression by showing up at Manchester City’s next game, a high-stakes derby against Manchester United played the day after the fire, wearing a T-shirt that read “Why Always Me?” The shirt was Balotelli’s wry acknowledgment of the advent of BALOTELLI!!, and the manner in which he revealed it, pulling up his jersey after scoring in City’s historic 6-1 atomization of United, only contributed to the widespread feeling that everything BALOTELLI!! did was comically outsize and wild.5 The feeling persisted even when he claimed that his friends, not he himself, had started the fire, and only grew when Manchester City put him on a poster as the face of history’s most ill-advised fireworks-safety campaign.

If I sound ambivalent about all of this, it’s because I am. I like Balotelli. I’ve never had a lot of patience for the anal-reactionary pundit code that wants sports to be a slog of joyless duties joylessly met. I like players who show off and keep me guessing — I watch sports to be amazed, not to have my will to live beaten out of me as two Big Ten coaches prove their manhood by running the ball up the middle 47 consecutive times. American and English soccer fans turn purple over the idea of stars not respecting their opponents, but Garrincha, one of the most beloved players in the history of the Brazilian game, used to pass up scoring opportunities to go back and beat defenders he’d already beaten once, not because it was sound tactics but because he just totally loved doing it. That approach obviously has its limitations as a competitive philosophy, but personally, I think it’s kind of marvelous.

So yes, if I had to choose between BALOTELLI!! and a player like John Terry, who built an unimpeachable reputation as an oaken-hearted warrior of England before he was revealed as a maybe-racist who sleeps with his teammates’ girlfriends, I’m taking Mario a million times out of a million. But there’s a problem here, which is that even if you love the caricature, BALOTELLI!! is arguably just as dehumanizing as the insistence on conservative virtue that produces figures like Terry. Players who become full-fledged lunatics in the media almost always wind up fulfilling a deeply strange sacrificial-wish-fulfillment impulse in sports fans. We collapse the distinction between celebrating them and mocking them so that we can simultaneously fantasize about a life without boundaries and punish the players for apparently living the fantasy. Just think about the tone in which someone might write “Balotelli is awesome!!” on Twitter. It doesn’t take him even a little bit seriously; it blows him up and cuts him down at the same time. And again, that’s from the minority of fans who don’t just reflexively hate him.

And there’s another dimension here as well, which is that over time, some players have learned how to exploit the CAPITAL LETTERS!! phenomenon in order to get attention, stay in the spotlight, maximize their endorsements, and so on. To be “crazy” in the style of 80 percent of NFL wide receivers takes an incredible amount of intelligence and planning. They were already in on the joke before we got there. But what about athletes who are actually crazy? One of the really uncomfortable things about following Mike Tyson over the years has always been that, under all the posturing, it was pretty obvious that this garishly entertaining tough guy was terribly vulnerable and suffering before your eyes. Even now, in his gloomy On the Waterfront stage, Tyson is easier to mock — the pigeons, the reading lists, the sense that he is eternally walking hunched on a beach at dawn in a skullcap and a hoodie — than to listen to. His attempt to become less ridiculous is just fresh grist for the ridiculousness mill. There’s a steady danger with figures like this that we are turning people who need help, or at least sympathy, into objects for casual consumption. I can’t stand sports morality, but I’m pretty sure that’s not okay.

So which is Balotelli? I’m really not sure. The “Why Always Me?” shirt was reassuring because it suggested both a degree of self-awareness and a sense of humor about the circus his life has become. On the other hand, some of his antics are clearly on the wrong side of unhinged. You don’t throw darts at the youth team to land a new Puma contract. Balotelli has been famous and controversial since before he was out of his teens, and before that his life was not particularly funny. He’s got a pretty rough child-of-African-immigrants/foster-family backstory, and if I had been subject to as much racial abuse as Balotelli faced in Italian stadiums, I might have wanted to blow up more than just fireworks. He’s talented enough as a footballer to transform his reputation through his play, but he’s still so young that plausible impulse control is a terrifyingly long way away. I want to go on being entertained by him — please, more madcap backheels — but whatever happens, I hope he can avoid the fate of other athletes who have become public cartoons of themselves.

Take the fate, for instance, of Antonio Cassano, another Italian striker with a reputation for consuming loopiness.6 Cassano, who’s 29, has lived through every variety of every form of scandal known to man, all of it exhaustively chronicled by the press. This past weekend, he was taken to the hospital after reportedly having a stroke. When I saw the news, the first thing that popped into my head, before I had time to think or feel anything else about a talented athlete in his late 20s suffering a life-threatening medical emergency, was “That is so ANTONIO CASSANO!!”

Previously from Brian Phillips:
Tim Tebow, Converter of the Passes
Patti Smith, the Curator of Rock ‘N’ Roll
Ronaldo vs. Messi
Noooo-klahoma!: The misery of rooting for the Oklahoma State Cowboys
The Problem with Novak Djokovic
Corruption, Murder, and the Beautiful Game: On FIFA’s scandalous history
The Long Autumn of Roger Federer