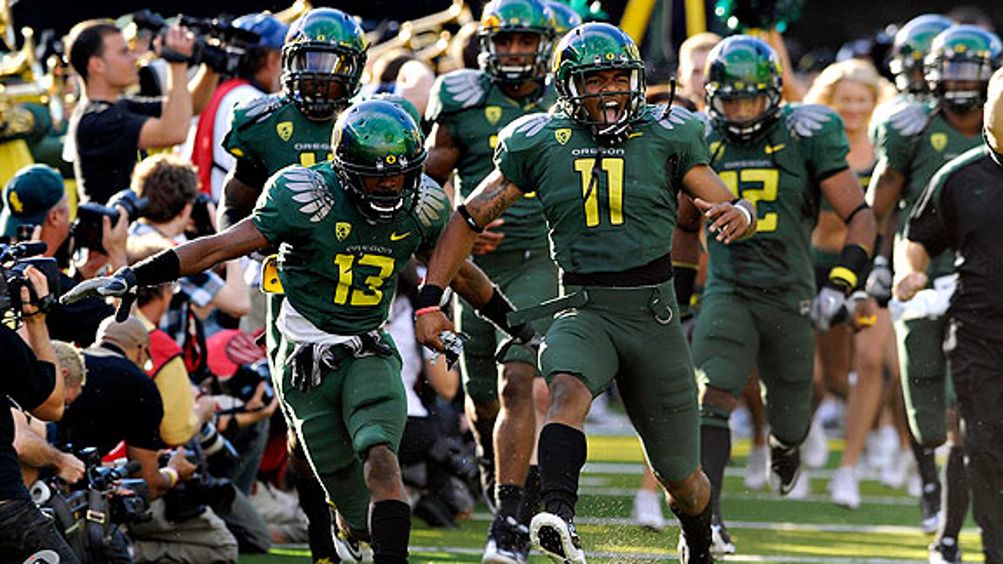 There is next to no reason the University of Oregon should have a good football team. Eugene is a small city and is not near a major media market, there’s very little local college-caliber talent,1 and for literally 100 years the Ducks did almost nothing but lose.2 But the past decade and a half has been different. They’ve been to the Rose Bowl, the Cotton Bowl, the Fiesta Bowl, and last year’s national championship game, and they will start this season Saturday night against Louisiana State in Arlington, Texas, ranked third in the country. How did this happen?

At the top of the list of reasons: their uniforms.

Not to Rachel Bachman. “It all starts with the uniforms,” said the sports business reporter for the Oregonian.

Not to Paul Swangard. “The uniforms, I think, more than anything else,” said the managing director of the university’s Warsaw Sports Marketing Center, “are probably the key ingredient.”

And not to Tinker Hatfield. “What is a more visible way to turn up the heat and create a personality,” the famous Nike designer said, “than through the football uniforms?”3

Oregon clearly is the beneficiary of its unique relationship with Nike boss Phil Knight, a 1959 alum who has used his fortune to give the Ducks every potential material advantage. But the most consistently conspicuous portion of Knight’s lavish contributions are the team’s much-discussed uniforms — the yellows and the greens, the blacks and the grays, the highlighter neons and the stormtrooper whites, the many different helmets and jerseys and pants and socks and shoes, the more than 500 possible combinations in all.

The Ducks lost both those games, but this, according to the creation tale,5 was enough to interest Knight. His company made so much money from the mid-’80s to the mid-’90s that smart people started writing books about what it was doing. Nike, the authors agreed, was a new kind of company in a new kind of world. The sneaker behemoth based in Beaverton, Ore., was selling packaging as much as it was selling products.

“Nike is not a production company,” Robert Goldman and Stephen Papson wrote in Nike Culture: The Sign of the Swoosh. It “designs, develops and markets the branded goods.”

“The whole thing happens on TV now,” Knight said in 1993. “The final game of the NCAA basketball tournament is better than any runway in Paris for launching a shoe. Kids climb up next to the screen to see what the players are wearing.”6

So after the Cotton Bowl loss, Knight asked the Ducks’ coach a question, and he asked Nike’s designers a question.

He asked the coach: What do you need from me?

He asked the designers: How can we make teenagers who are good at football want to come to the University of Oregon?7

About a year later, on the other side of the country, the head of a think tank and a visiting scholar at Berkeley’s Center for Research on Social Change gave a wonky talk at a conference in Cambridge, Mass. “We are headed,” Michael H. Goldhaber said,8 “into what I call the attention economy.”9

Economics is the study of the allocation of resources that are scarce. These days, more and more, information isn’t scarce. Stuff isn’t scarce. What’s scarce is attention. The companies that win in an attention economy are those that win the eyeballs of people who have too much to look at. Too many ads. Too many screens in too many places. Too many games on too many channels on too many days of the week.

“This new economy,” Goldhaber said in Cambridge in January 1997, “is based on endless originality.

“If you have enough attention,” he added, “you can get anything you want.”

John C. Beck cowrote a book called The Attention Economy: Understanding the New Currency of Business. “Just go back to what gets attention in the animal world,” he said.10 One thing is fear. Another thing is bright colors.

“If attention is now at the center of the economy rather than stuff, then so is style,” UCLA professor Richard Lanham wrote in The Economics of Attention: Style and Substance in the Age of Information. “It moves from the periphery to the center. Style and substance trade places.

“Push style to the extreme,” Lanham wrote, “and it becomes substance.”11

The answer Knight got from the coach was an indoor practice facility. The coach got that and more. Since then, Knight has spent some $300 million on stadium additions, luxury boxes, and palatial locker rooms. All of these things obviously are on the list of reasons Oregon’s football team got good.12

But back in Beaverton, the Nike designers did their part, using the Ducks program as part laboratory, part showroom.

Blocky, standard letters became sleek, modern fonts. Wings on the shoulders? Diamond designs on the knees? Silver shoes worn at Southern Cal? “Nothing,” Nike creative director Todd Van Horne said, “is off the table.” The paint for the dark green helmets was made with glass beads and cost $2,400 a gallon. There were fall fashion shows.

“They look hatched from an alien pod,” Bachman wrote in the Oregonian, “sent to Earth to seek first downs and souvenir sales.”13

This, Michael Smith wrote in the SportsBusiness Journal, was part of “Nike’s 15-year project to build Oregon football into a national power largely on the strength of marketing and branding.”14

“We wanted to be out there, to be purposely controversial,” Hatfield told Smith. “That’s a part of what we do that’s not very well understood. A lot of the sports writers at first hated it” — fans, too, by the way, and still do — “and that’s actually what we wanted. If you’re purposely trying to stir up the nest and increase visibility, you want them saying something.”

“It’s probably the easiest way for Oregon to cut through the clutter of college football, to be undeniably known for something,” Swangard said. “If no one knows your product exists, there is no demand for your product, and at the end of the day it’s about 18-year-old kids. The uniforms are the key ingredient to getting those bodies there, and the bodies are what win you football games.”

“The uniforms are awesome,” he said in 2008 when he was asked why he wanted to go all the way to the Pacific Northwest to play football.15

“I loved the uniforms,” he said before the 2010 Rose Bowl, “and then I got to know more about Oregon.”16 And then he became a Heisman Trophy finalist for the Ducks.

Climb up next to the screen.

To see what the players are wearing.

The past couple of years, as the Ducks were making their way to the Rose Bowl and their first no. 1 national ranking and then this past January’s national championship game, which they lost to Auburn on a field goal with two seconds left, more teams around the country started wearing uniforms that made them look like … Oregon. West Virginia and Virginia Tech. Miami and Boise and TCU. Now Arizona State and Oklahoma State and Wyoming.17

Nike’s designers are still working. The evolution is ongoing. All those other schools? They won’t look like Oregon for long.