Tears of a Fighting Clown 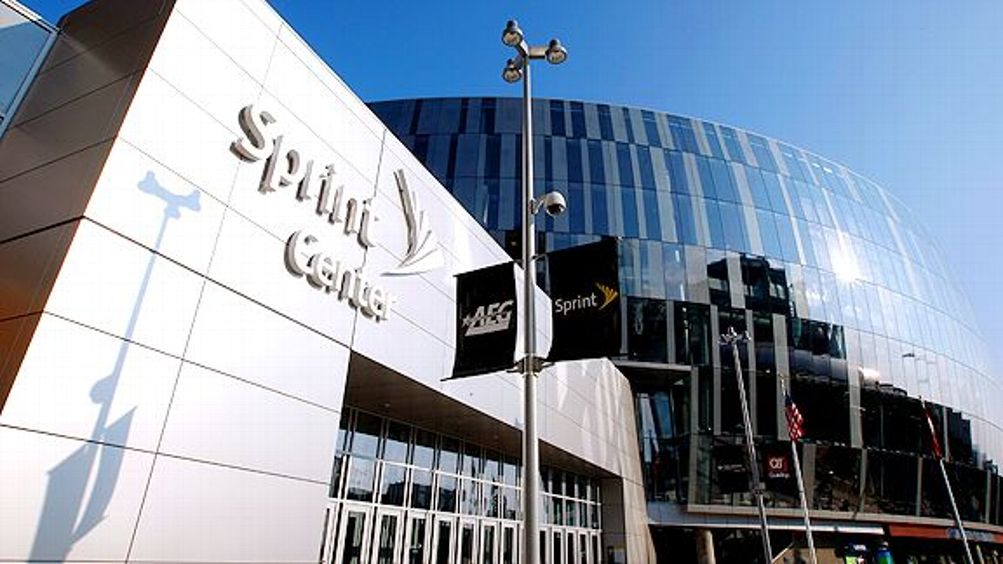 The NBA lockout has begun, and 30 cities now fear the same sad prospect this fall: day after day of staring at a lovely arena built for the pleasures of watching grown men play professional basketball, with no actual professional basketball team around to play in it. Twenty-nine of those cities host actual NBA franchises. The 30th is my hometown, the place where I grew up and will always be from, even if I no longer live there.

Almost four years ago, Kansas City’s civic and business leaders celebrated the opening of the Sprint Center, a 19,000-seat arena that was supposed to replace the decrepit and unloved Kemper Arena while also landing an NBA franchise for a first-rate basketball town that thinks of itself as superior to NBA cities like Memphis, San Antonio, and Oklahoma City. (Oklahoma City!) As you might have noticed — though you might not have, as we’re talking about Kansas City here — things have not gone as planned. Currently the Sprint Center is home to an arena football team and not much else. Its Wikipedia page boasts of “notable concerts,” “possible major-league sports” and, my favorite, “other sporting events,” a category expansive enough to include both beach volleyball and bull riding. The fate of the Sprint Center is the latest bit of evidence that things have gone south on K.C.’s sporting scene: The once-great sports page at the Kansas City Star has been gutted, the Chiefs haven’t won a playoff game since the 1993 season when Joe Montana was the quarterback, and, as Rany Jazayerli persuasively argued in Grantland the other day, over the past 25 years the Royals have been the worst franchise in all of professional sports.

These developments have added to Kansas City’s longstanding and permanent inferiority complex. Other cities are proud of what they are, and if Kansas City were a typical city, it would revel in its status as a cow town with a distinctive local character and a pair of once-great sports franchises. But Kansas City wants to be more than that. It wants to be thought of as sophisticated and big league. It is proud not of what it is but of what it used to be — a vibrant and violent place of jazz and gangsters and Negro Leagues baseball. Combine this romantic, backward-looking vision with the traditional Midwestern delusion that you are more American than the rest of the country, and you’re left with a strikingly insular self-conception, a sense that you are in a place in righteous decline.

This unusual self-image, both nostalgic and resentful, is one reason why growing up in Kansas City — or having grown up there, as the feeling doesn’t fully set in until you leave — imbues you with an unexpected feeling of loneliness. It’s startling to find out — for me, the first time was as a college freshman in the South — that Kansas City is not like anywhere else. It’s as distinct as Texas or New Orleans or Los Angeles or Manhattan, only you wouldn’t know it by its local view of itself (which is that it’s the perfect, if disrespected, distillation of the hard-working, unpretentious American essence) or its national reputation (which is that, as the lack of an NBA franchise indicates, it doesn’t exist).

Bear with me, but the best way I can explain this lonely feeling, this disconnect between the way Kansas Citians view themselves and the way Americans view Kansas Citians, is by relating the legend of Billy Smith. If you’re from Kansas City and in your 30s, you’re probably already smiling. Perhaps your brain has begun an incantatory recitation: I’ve been climbing trees all my life. But never trees near overhead lines … And if you’re not from Kansas City, you’ve probably clicked away by now, and are already watching a man punch a woman in the face at a McDonald’s on YouTube. But for those of you still here, know this: Billy Smith was of titanic local cultural import when I was a child.

Every weekday afternoon, as Kansas City’s children of the 1980s settled in front of their televisions for their regular V.H.F. diet of G.I. Joe and He-Man and Jem and Transformers, we were also treated to ritual appearances by a child named Billy Smith (surely not his real name). Billy was billed, in white type, in the style of those old “less filling/tastes great” Miller Lite ads, as a “tree-climbing expert.” While sitting in the branches of a tree — he was an expert, remember — Billy would advise kids, on behalf of Kansas City Power & Light, not to climb utility poles (“Really dumb,” he would say) or trees near overhead power lines (“Because if you touch a line, or your weight makes a branch touch a line, that electricity could come right to you. And that could hurt — it may even kill you“). He ended with a slogan that my friends and I recall with the affection that right-thinking non-Kansas-Citians reserve for something like “Where’s the beef?”: Always look up before climbing. And please, stay out of trees near overhead lines.1

If Billy Smith’s commercials had aired in New York, he would have had a Seinfeld episode made in his honor. Instead, he is lost to history. In a fate that sounds like something Winston Smith would have carried out in 1984, Billy Smith can’t even be found on YouTube, even though Google Suggest fills in “tree climbing expert” for you as soon as you type “billy smith t.” (Are hundreds of thousands, if not millions, of members of the Kansas City diaspora furiously typing his name into Internet search engines, desperate to see him one last time?) I’m pretty sure that Billy Smith is the only thing I have ever searched for on YouTube that could not be found. They have those awful “My Buddy” ads from the same period, after all. Like Kansas City to David Stern, Billy Smith might as well have never existed.

Nowadays, Kansas City Power & Light is known for something other than terrifying the city’s children with televised threats of their impending deaths by electrocution. The utility gave its name to the city’s popular Power & Light district, which abuts the empty Sprint Center, the symbol of Kansas City’s aspirations to national relevance and its actual national irrelevance. In defense of Kansas City, though, no one there really cares. Or rather, it’s slightly more insane than that. We care that David Stern keeps slighting us, even though we don’t care about the NBA. We’re2 happy to have an arena that likely will serve as the permanent home of the Big 12 men’s basketball tournament and will cement Kansas City as the best college basketball city in the world.3 (Really, I would rather Kansas City be the home of the Big 12 basketball tournament than an NBA franchise.)

If the NCAA were to somehow lock out the nation’s college basketball players, Kansas Citians would begin climbing utility poles in droves, in search of the blissful release of instant death. To us, college basketball is not the minor leagues — it’s the main attraction. The NBA is more like the Senior PGA Tour, a place to watch aging, faded greats who are no longer on the big stage. (I watched the NBA Finals with at least one eye keeping track of where Mario Chalmers was, on or off the court, at all times.)

And so we can’t get a team, David Stern says, because no one in Kansas City wants to buy a team. And to be honest, there are more important things for our Local Rich Guys to do (and in Kansas City, the Local Rich Guys include people who live in Texas, a tradition that dates back to Lamar Hunt). They’re busy outbidding the Basketball Hall of Fame for the two pieces of paper that contain James Naismith’s original 13 rules of basketball, so they can be put on display in — I am serious — Kansas City’s largest art museum (before one day bringing them “home” to Lawrence, Kan.). A bunch of rich people got together and built the College Basketball Hall of Fame in Kansas City — right next to the NBA-less Sprint Center — because they think the Basketball Hall of Fame in Springfield, Mass., doesn’t pay enough attention to the NCAA. One day soon, the NBA lockout will be over, and a lot of people in those other 29 cities will celebrate. In Kansas City, they’ll barely notice — except to possibly take umbrage at David Stern’s refusal to honor us with a franchise that we don’t really want except as validation of our needy aspirations to the big-time.

I’m not trying to be mean to Kansas City.4 It was a pretty great place to grow up in, in part because we were all pretty lonely, even if some of us didn’t know it. I liked it enough that I moved back after college, hoping to find a writing job somewhere. It sounds ludicrous to me now, thinking of a 22-year-old me carting clips from a college-humor magazine to the Star and the alt weeklies and the Olathe Daily News, a suburban daily near my suburban hometown that actually did give me a job.

I didn’t know yet that if you want to do something reasonably creative for a living and get paid for it, pretty much the only way to do it in Kansas City anymore was to write for Hallmark cards. That’s probably part of why my friends and I were so bored, why a large number of us assembled one day in Kauffman just to see the name of our mythical organization — the American Serfs International Youth Militia, MO-KAN chapter — on the Royals’ big light-bulb scoreboard as one of the “visiting groups” thanked during the middle innings. (We were a hand-to-hand combat militia. The slogan: Try to take these arms away, Uncle Sam!)

My point is this: Not long after I took that job in Olathe, I left, looking for a bigger stage and a bigger paycheck. We pretty much all left. I went to Washington, others went to Chicago or Los Angeles or New York, aspiring writers and comedians and filmmakers and actors and even lawyers. I don’t think you can blame us. Each and every one of us just wanted the same thing out of Kansas City that David Stern wants and hasn’t found: ownership and fan support.