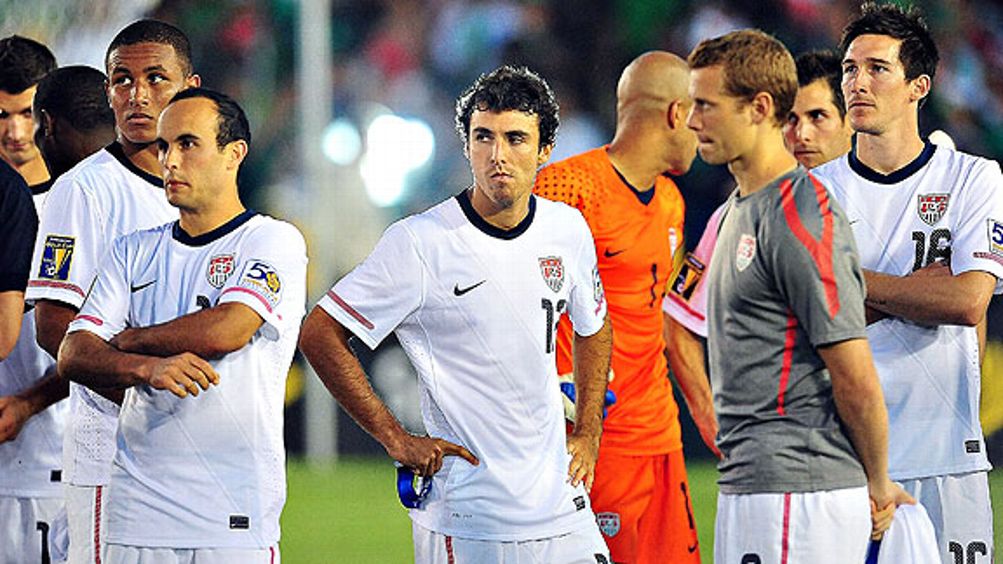 Losing 4-2 to Mexico in the Gold Cup final was the best thing that could have happened to the United States men’s national soccer team. It’s time for the USMNT and its fans to grow up and realize that progress is not measured by narrow victories over Central American countries or avoiding embarrassment at the World Cup. The solution to what’s wrong with the team is bigger than putting Jonathan Bornstein on a slow boat to Honduras. It’s even bigger than firing Bob Bradley.

What should the goal of the national team be? Should it be to win as many games as possible? To defend the country’s honor and foster a sense of civic pride? To get Landon Donovan on late-night talk shows? The goal of the USMNT should be very simple: To win a World Cup. Every single decision Bob Bradley and U.S. Soccer Federation president Sunil Gulati make should be considered with that idea in mind. Instead, the minds in charge of the USMNT have consistently employed a strategy based around quick fixes and short-term victories.

If the United States had beaten Mexico and won the Gold Cup, that mentality would have been rewarded. It was plain to see on Saturday night that the American team was making superheroes of Giovanni dos Santos and Andres Guardado. The USMNT was overmatched on Friday, but the team’s deficiencies stretch far beyond Saturday’s results and have bearings on the future of U.S. soccer.

In naming his roster and setting his starting lineup, Bradley blooded two relatively new 29-year-olds into the side, center back Clarence Goodson and midfielder Jermaine Jones. Goodson had 18 caps before this tournament; if he was really a player of international quality, he would have shown it before now. Jones is unquestionably talented, but he’s a German transplant who’s never played with any other members of the national team at any level. Talent trumps chemistry, but by the time Brazil 2014 rolls around, Goodson will be 33 and Jones will be 32. By then, they will be past-their-prime question marks, not lynchpins of a great team.

Bradley’s decision to include Carlos Bocanegra and Steve Cherundolo as regular starters was also questionable. Both Bocanegra and Cherundolo will be 35 by the time the next World Cup rolls around. Only one defender older than 35 started all of his team’s games at the World Cup in South Africa, and that was 2006 FIFA Player of the Year Fabio Cannavaro. Neither Bocanegra nor Cherundolo are anywhere near as talented as Cannavaro, and as we saw with Cherundolo on Saturday night, older players are at a higher risk of getting injured after a full season of club football in Europe.

Meanwhile, the core of what will likely be the 2014 World Cup team sits on the bench. Twenty-four-year-old center back Tim Ream is the next great American export to Europe, capable of turning defense into attack in a moment with his potentially brilliant distribution from the back. After Ream gave away a penalty in the Panama match, Bradley benched him for the rest of the tournament, even turning to Bornstein ahead of Ream in the final. Ream’s partner in central defense will likely be mammoth L.A. Galaxy defender Omar Gonzalez, 22, but Bradley called up Goodson instead of Gonzalez for the Gold Cup. Jones played ahead of Maurice Edu, who was a regular contributor to Scottish power Rangers this past season at the age of 25. Those are players who will be peaking when 2014 comes around, but they need the experience of playing competitive international football together now to be ready for Brazil. That experience doesn’t come from sitting on the bench.

Bradley the elder has brought in some youth, but only grudgingly. After Bocanegra took Ream’s spot halfway through the Gold Cup, 22-year-old Eric Lichaj moved into the lineup at left back. He looked bad when he was moved to right back against Mexico on Saturday night, but those are the growing pains should be tolerated at this early stage. Bradley started the tournament with Jozy Altidore and 18-year-old Juan Agudelo at striker, but replaced Agudelo after two games with once-capped 28-year-old Chris Wondolowski, who, during the Panama match, miraculously punted the ball over the crossbar from three yards out. In the final, Bradley opted for a 4-6-0 alignment, with Landon Donovan and Freddy Adu as the players furthest forward. Adu was arguably the team’s best player. Bradley needs to give Adu a few matches in a row to prove his worth, not pull him out of mothballs every two years like an old toy.

You might excuse Bradley’s decisions if this was an isolated incident, but he’s consistently struggled to keep the big picture in place as team manager. Back in the 2007 Gold Cup final, the U.S. roster included Pablo Mastroeni and Brian Ching. Neither of those players made the World Cup squad. Bradley ran out older nonentities such as Eddie Lewis and John Thorrington in early World Cup qualifiers before narrowing down the player pool, but he never found a midfielder to work alongside his son Michael. This roster instability ultimately ended up tanking the team’s chances in South Africa. Bradley started with Ricardo Clark against England, benched him after one game, and then went back to Clark for the Ghana match. Clark promptly gave the ball away for the first Ghanaian goal and was subbed out for tactical reasons after 31 minutes. You don’t find a midfield partnership in the World Cup. You can find it in the Confederations Cup, but Bradley started seven different midfielders in five games there, too. The best place to forge a national team partnership is in the World Cup qualifiers and the friendlies and international tournaments that precede them. That includes the Gold Cup.

There would have been no shame in losing to Mexico with a young, developing team that could take the experience into the World Cup qualifying phase next year. Instead, Bradley clearly believed that he could win the Gold Cup with another run from his team of veterans.

The fact that he failed at both is a catastrophe for the current USMNT and its future. Let’s hope, though, this humiliating and counter-productive loss to Mexico will finally be the wake-up call U.S. Soccer has needed for years.

Filed Under: College Sports, Soccer, Sports, The U