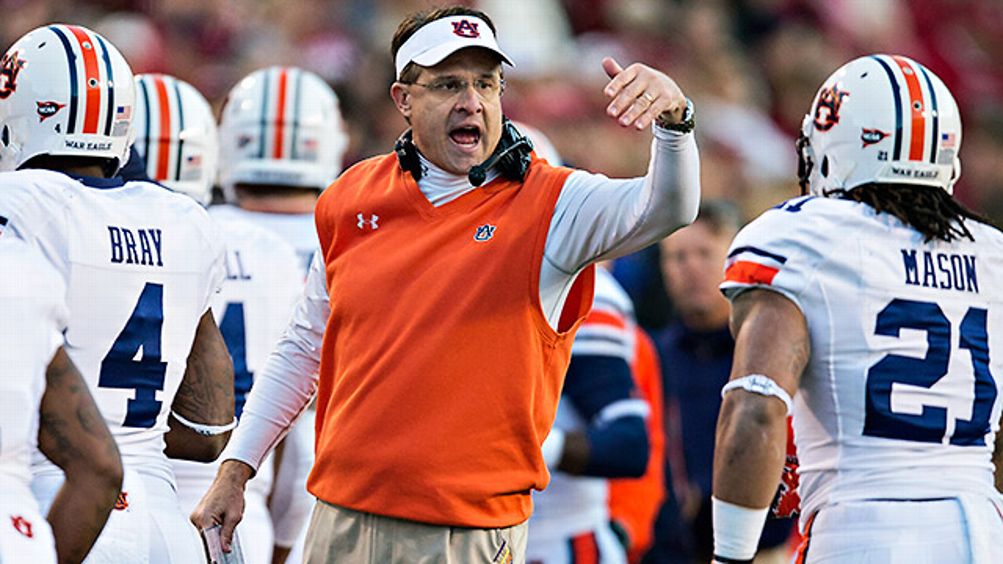 In 1999, Shiloh Christian and Junction City played in the third round of the Arkansas high school football Class AA playoffs. Shiloh quickly fell behind 24-0, then 38-14, but rallied to win 70-64 on a touchdown in the final two minutes. The next morning, an Arkansas newspaper called the game “legendary,” “mythical,” and “unbelievable,” prophesying that it would “become one of those games that started with 6,000 in attendance and, as the story grows through the years, will probably end up with around 40,000 there.”

Gus Malzahn, then Shiloh Christian’s head coach and currently the head man at Auburn, vividly remembers the game. “It was the wildest experience of my coaching career,” Malzahn wrote in his book, The Hurry-Up, No-Huddle: An Offensive Philosophy. “The first question that will probably come to your mind is, ‘Just how bad were both defenses?’ The funny thing is that, coming into the game, both teams were undefeated. Junction City was only giving up four points per game and we were only giving up 11.”

The game started portentously when, just before kickoff, a car backed into a telephone pole, exploding a transformer and knocking out the power. “The game started an hour and a half late, and the scoreboard didn’t work, which upset me,” Malzahn wrote. “Little did I know, however, that the malfunctioning scoreboard would be an advantage for us when we got so far behind early and our kids couldn’t see the score.”

Junction City’s star running back, Marcus Godfrey, exploded out of the gate for first-quarter touchdown runs of 39, 93, and 79 yards. “I looked at my defensive coordinator, Kevin Johnson, and said ‘They’re going to score a hundred points and he is going to run for a thousand yards.’ He looked back at me with a blank expression,” Malzahn wrote. “We were in a state of shock.”

The ugly start proved to be an opportunity for Malzahn, who believes his wide-open hurry-up system is designed to physically and mentally wear down opponents. When better to test that belief than in a game that looked hopeless? Shiloh narrowed the gap to 51-35 at halftime, and though his team still trailed by a considerable margin, Malzahn knew the tide had turned.

“As I watched their players leaving the field, I noticed some of their athletes were jogging slowly, while others were walking laboriously to their dressing room,” Malzahn wrote. “I told our coaches, ‘We are going to win this game.'”

He was right, and not for the last time.

This has been a dream season for Auburn. Just one year removed from a dismal 3-9 record, including an 0-8 conference mark, the Tigers are 12-1. They beat their archrival, Alabama, in one of the best football games in recent memory, and now they’ll face Florida State for the national championship.

Much has contributed to that turnaround, including the talent Malzahn inherited when he became Auburn’s head coach in December 2012. But Malzahn and his madcap offense are the primary reasons why the Tigers have gone from being a last-place SEC West team to a national title contender. Auburn’s offensive resurgence has largely stemmed from two factors: the lessons of a 30-year-old book about a 50-year-old offense, and the ability of a former high school coach to adapt schemes to his players.

Malzahn began his coaching career in 1991 as a defensive coordinator at Hughes High School in Arkansas. After just one season, he was promoted to head coach. “I didn’t have a clue what I was doing,” Malzahn told Sports Illustrated in 2010. “No, I’m serious, I really didn’t.”

Malzahn had never been in charge of an offense before. Searching for help, he turned to a book famous in coaching circles, The Delaware Wing-T: An Order of Football,1 by Harold “Tubby” Raymond, and followed it “word-for-word.”

The genius of Raymond’s book is that it’s not merely a collection of football plays, though there’s still plenty of that. Instead, it’s primarily a treatise on how to think about offensive football. “The Wing-T is more than a formation,” Raymond wrote. “It is sequence football.” The animating idea behind Raymond’s “Delaware” wing-T was his belief that the best offenses were built around a tightly wound collection of plays that fit together so that defenses effectively dictated the next play; each time a team tries to stop one thing, it opens itself up to something else. Beginning in the 1950s and lasting into the early 2000s — first as an assistant under wing-T innovator David Nelson, then as head coach from the mid-1960s on — Raymond fielded teams that devastated defenses. If the opposition tried to stop his base plays, Raymond had counters to his counters, counters to his counters to his counters, and so on. He amplified this “sequential” approach by “utilizing the misdirection theme to its fullest.” With a dizzying array of motions, backfield actions, and fakes, Raymond correctly determined that defenses wouldn’t be able to stop his offense if they couldn’t find the ball.

Although Malzahn’s early teams ran Raymond’s brand of the wing-T verbatim, Malzahn soon began experimenting with the new trends sweeping across football in the 1990s. By the time Shiloh Christian faced Junction City in 1999, Malzahn’s offense had evolved into the up-tempo spread that would become his trademark.2 Raymond’s influence remains crucial to Malzahn’s offense, however, and much of Auburn’s current playbook consists of updated takes on staple wing-T plays. While serving as Arkansas State’s head coach, for example, Malzahn explained how he adapted one of Raymond’s core plays, the Buck Sweep, to fit his shotgun spread offense.

In Raymond’s wing-T, wingbacks, receivers, and running backs often went in motion one way or another, and the quarterback almost always carried out one, two, or sometimes even three fakes on a given play. The same is true in Auburn’s offense: Against Missouri, running back Tre Mason’s big run around the right end on the Buck Sweep was set up by a receiver who faked an end around to the left, thus freezing Missouri’s defenders long enough to allow Auburn’s pulling linemen to get out in front and lead the way.

Over the last several seasons, Malzahn and his offensive coordinator, Rhett Lashlee, have evolved the offense beyond its wing-T roots. Rather than chase the latest trends floating around coaching clinics, however, the two have always built their offense around their players, in particular their quarterback. While many consider Malzahn a run-game guru, he has coached pass-happy offenses, run-heavy attacks, and evenly balanced offenses over the last seven years.

Following a turbulent season as Arkansas’s offensive coordinator under Houston Nutt, Malzahn became co-offensive coordinator at Tulsa along with Herb Hand, currently the offensive line coach at Vanderbilt. Tulsa led the country in total offense in both of Malzahn’s two seasons, sporting a slightly different style each time: In 2007, Tulsa finished third in the nation in passing offense, as quarterback Paul Smith threw for more than 5,000 yards and 47 touchdowns. The next season, Tulsa finished fifth in rushing, as Malzahn merged his wing-T-infused run game with the zone-read ideas Hand brought from West Virginia, where he’d coached under Rich Rodriguez. Auburn was fairly balanced in both of Malzahn’s first two years, when he served as offensive coordinator and coached two very different quarterbacks in Chris Todd (2009) and Cam Newton (2010). And last season at Arkansas State, Ryan Aplin threw for more than 3,200 yards.

This season, Auburn has been anything but balanced — not that it has mattered. The 2013 Tigers are the first SEC team to average more than 300 yards rushing per game in almost 30 years. (The last team to do that? The 1985 Auburn team led by Bo Jackson.) But while Newton and current Auburn quarterback Nick Marshall both ran for more than 1,000 yards in Malzahn’s offense, they did so while using very different approaches. At 6-foot-6, 250 pounds, Newton was essentially Auburn’s power back, and Malzahn featured him on a variety of inside runs. Marshall, by contrast, is shorter and lankier than Newton but boasts great quickness and acceleration. As a result, Auburn’s 2013 offense has focused less on the core wing-T run plays and more on zone reads to get Marshall on the edges while allowing Mason to use his excellent vision and patience to find running lanes.

The backbone of Auburn’s current rushing attack has been an amped-up version of the zone-read, which gives Marshall as many as four options: (1) throw a receiver screen, (2) hand it to Mason, (3) keep the ball, or (4) keep the ball and then toss it to a receiver who can sit in an open area of the defense if the man covering him comes up for the run — a form of the quadruple-option.

Auburn used a version of this play repeatedly on its final offensive drive against Alabama (albeit one with only three options), when Marshall hit Sammie Coates for the game-tying touchdown as the entire Tide defense collapsed on the quarterback.

The most dangerous wrinkle in Auburn’s offense this season, however, has been providing Marshall with more protection when he keeps the ball. As the zone-read has become increasingly popular over the last several years, defenses have devised a variety of ways to defend it, often by confusing and overwhelming the quarterback.

Malzahn and Lashlee have countered those defensive responses by borrowing a concept from Chris Ault’s Nevada offense, one the San Francisco 49ers in turn borrowed and expanded upon once former Ault pupil Colin Kaepernick became their quarterback: namely, using tight ends, H-backs, and fullbacks to “arc block” linebackers and safeties who crash when the quarterback keeps the ball on the zone-read.

The Tigers do it in more than one way. Since Auburn’s loss to LSU earlier this season, Malzahn and Lashlee have continually tweaked and expanded how they use these extra blockers, including by sometimes using two arc blockers to take out linebackers and safeties.

Current Auburn offensive coordinator Lashlee was Malzahn’s quarterback at Shiloh back in ’99. Trailing 64-62 with roughly two minutes left in the fourth quarter, the then-sophomore — who set a national record with 672 yards passing that day — threw a touchdown pass to the back left corner. Along with the two-point conversion, it put Shiloh ahead for good.3

Malzahn still cites that game as the best embodiment of all the reasons why he believes in his offensive philosophy. “Quite obviously,” Malzahn said, “we wouldn’t have won the game or the state championship that year” if the coaches and staff didn’t also believe in that philosophy — or in Malzahn himself.

Malzahn made believers out of the rest of us this season, as Auburn became the hottest team in the country late in the year thanks to one improbable win after another.

Florida State, of course, will be a different kind of challenge on January 6, and the Tigers are more than a touchdown underdog. Whether it’s Shiloh vs. Junction, the Georgia deflection, or the Alabama Kick Six, however, miracles seem to follow Malzahn wherever he goes. Just ask the 6,000 — or 40,000 — fans who watched a pretty spectacular high school football game in northwest Arkansas in 1999. They know that Malzahn’s teams are capable of anything.