Andrew Luck and Robert Griffin III: The Future Is Now 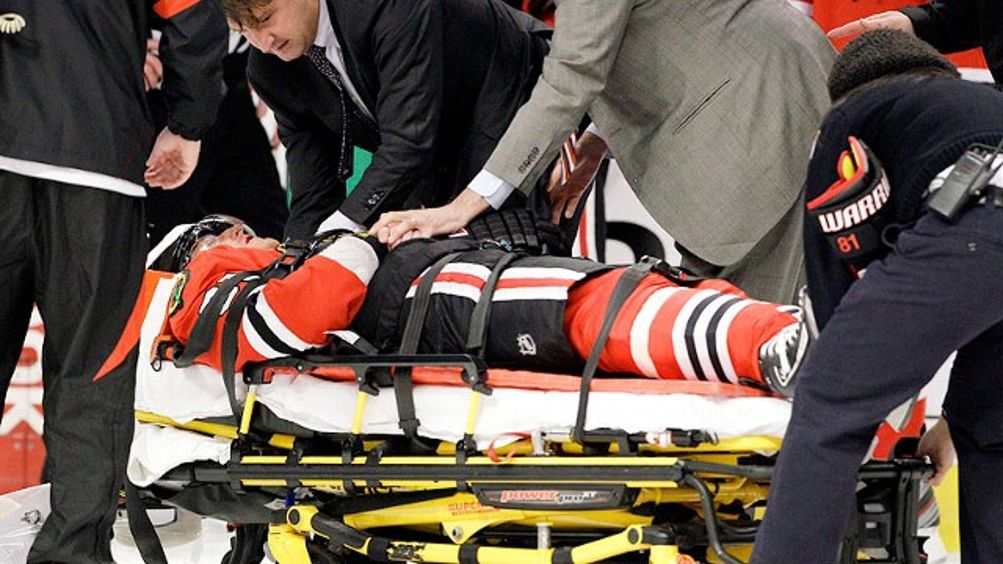 It was the Stanley Cup finals, the Detroit Red Wings and Toronto Maple Leafs, 1964. The game was in Toronto.

Johnny Bower was 39 years old. He had kicked around the minor leagues almost all his professional career, but everyone knew he would do anything to stop shots, even put his maskless face in front of them. He finally got his chance with the Leafs at age 33.

Gordie Howe had always been great. He had the hands to score, the elbows and attitude to command the corners, and the fists to embarrass anyone foolish enough to take him on. His reputation is embodied today in what is called “the Gordie Howe hat trick” — a goal, an assist, and a fight in the same game. He was then 36.

The puck had been shot into the corner in the Leafs’ zone near Bower’s net. Bower, who had learned to play his position before Jacques Plante had untethered goalies from their goal creases, moved toward the puck uncertainly, leaving himself exposed from behind. Howe bore down on the puck. Bower and Howe were both from Saskatchewan, Bower from Prince Albert, Howe from Floral. They had fished together. They were great competitors. The Wings hadn’t won the Cup in nine years. Bower’s backup goalie was Don Simmons, who hadn’t played a single minute in these playoffs. Howe, the toughest guy around, could’ve plastered Bower’s head against the glass, perhaps deciding the Cup at this one moment. Instead, he yelled, “Look out, John, I’m behind you.”

The Leafs won the Cup. I was 16, living in the Toronto suburb of Etobicoke. I read the story the next day in the newspaper. Howe’s “Look out, John” comes back to me 48 years later.

It was the third game of the opening round of the Stanley Cup playoffs, the Chicago Blackhawks and Phoenix Coyotes, 2012. Marian Hossa, a strong, talented forward for the Blackhawks, got the puck near his own blue line and started up the ice. With his teammates speeding past him, Hossa looked to make a short, backhanded dump pass, but had the puck knocked from his stick. As he turned to skate toward it and his teammate Jamal Mayers gathered it up and continued toward the Phoenix zone, Raffi Torres of the Coyotes crashed into Hossa.

Torres had once been a player who liked the puck. He scored goals. But when you score goals you have a target on your back, or head, or wherever your opponents decide to put it. All their focus can be on you. All your focus can’t be on them, because you have the puck and you have to be aware of your teammates who are rushing to find open ice. There is safety in being the hunter, not the hunted. As the hunter, as the lion, you seek out the vulnerable — the old, the sick, the injured. For the lion, it’s survival. Marian Hossa, unaware because he had no reason to be aware, was as vulnerable as the oldest, sickest, and most injured antelope in the jungle. Torres did what he did not because it was survival but because the weak have it coming to them, he had been taught — if they have their head down or their eyes away from the play. And because he’d started toward Hossa while Hossa still had the puck or almost still had the puck, he could say he was “just finishing his check.” That it was “just a late hit.” Torres crushed Hossa because he could.

Torres was suspended for 25 games. Hossa never returned to the series. Phoenix won. Shut down by the Coyotes’ goalie, Mike Smith, the Blackhawks needed the extra scoring that Hossa might have provided. After Smith, the most valuable player in the series was Torres.

It was the sixth game of the Coyotes-Blackhawks series; the third period. Michal Rozsival, a tall, angular defenseman for the Coyotes, was carrying the puck behind his own net, chased by Blackhawks forward Jonathan Toews, who had Rozsival’s attention. Coming from the other side of the net was Chicago forward Andrew Shaw. Four games earlier, Shaw had hit Mike Smith’s jaw with his shoulder as Shaw turned the Coyotes’ net, sending Smith spinning and to the ice. Smith was shaken, but got back up and continued. Shaw was suspended for three games. This was his first game back. Rozsival, his vision now blocked by the net and distracted by Toews, didn’t see Shaw coming. Shaw could’ve launched himself into Rozsival’s head the way Torres had launched into Hossa’s. But he didn’t. He hit Rozsival solidly in the chest with his shoulder. The puck went loose. Maybe Shaw let up because he still had in his mind his three-game suspension. Maybe Shaw realized it was his job to create a scoring chance, not to maim.

A few minutes later, in a different kind of vulnerable moment, Rozsival’s face was smashed into the glass by Blackhawks forward Jimmy Hayes. Rozsival was dazed and cut, and didn’t return to the game. Hayes was given a five-minute boarding penalty and a game misconduct.

I love the first round of the playoffs. Everything is fresh; everything is possible. First-seeded teams play eighth-seeded teams that are just as able to win as the no. 1s. Upsets happen; many more almost do. By the last two rounds especially, when even the unworldly energy of the underdog seems to flag, talent tends to win out (goalies notwithstanding) and the outcomes become more predictable. In the first round there are also games everywhere on the digital box time zone after time zone, with cut-ins from other games and overtimes. If the games don’t quite blend into each other, their emotions do. Every next game in a night seems more exciting because of the last one. Every next game seems more out of control because the last one was.

This year’s first round felt like a giant primal scream. The scream began when Nashville’s Shea Weber rammed Detroit’s Henrik Zetterberg’s head into the glass, it picked up volume after the Rangers’ Carl Hagelin took out Senators captain Daniel Alfredsson, and it culminated with the Torres hit and in the days that passed before his final suspension was announced. By then, things seemed different than they had ever been before. You could hear it in the intensity of the talk on sports channels, on mainstream channels, in newspapers, and on the streets. Players going down one after another — who would be next? What’s going on here?!

The talk wasn’t just about which player was a disgrace or what coach should be fired, but rather the violence that seemed deeply entrenched in the game itself. Yet people were watching. TV ratings were up. One writer explained that it was because of our fundamental human love of violence. But for most, it was simpler. The unimaginable was happening in front of our eyes every night; we couldn’t miss seeing what would happen next.

Then one moment chilled my spine. If the league isn’t going to do something, some coaches were reported as saying, we’re going to have to do it ourselves.

Players commit themselves to their teammates and to their teams. It’s what they love about their teammates, and what their teammates love about them. It’s part of who they are. It’s what the fans love about them, too. If these players are asked to do more, if the standard of commitment to the team goes up, they will do more. Yet something keeps them from committing to what they shouldn’t commit to. In the 1980s, if opponents of the Edmonton Oilers had truly done everything to win the Cup, they would’ve gone after Wayne Gretzky’s head. It wasn’t Gretzky’s enforcer teammate, Dave Semenko, who stopped them, nor the referees nor the league officials and the suspensions they would have levied. The players wouldn’t do it, just as every Texas Rangers pitcher didn’t throw every pitch at Albert Pujols’s head in last year’s World Series. Some basic humanity, some basic belief in the essence of a game held them back.

That all seemed on shaky ground in Round 1. In this atmosphere, if the teams were to do it themselves and not wait for the league, it might mean not just a fist for a fist but a head shot for a head shot. This after news of the New Orleans Saints’ bounty program targeting opposing players and the curdling words of Saints defensive coordinator Gregg Williams about a San Francisco 49ers running back: “We’ve got to do everything in the world to make sure we kill Frank Gore’s head.” Where are we going? Is there anything we won’t do?

Now with fewer games and fewer series to build up the collective temperature, and with the consequences more clear — of the injuries more so than the suspensions — maybe things will settle down. Maybe they will revert to teeth-gritting, eyes-popping, normal playoff intensity.

Don Cherry likes to talk about how the implementation of the instigator rule changed the game. Teams had employed enforcers to protect their star players, but, with the new rule, enforcers might draw an extra penalty as “instigators” when they intervened. This ultimately proved too high a price for teams to accept, star players went unprotected, and, according to Cherry, made them increasingly open to abuse and injury, throwing the game out of control. But it also opened up the prospect of the league acting as its own enforcer, to shut down the most dangerous and exaggerated aspects of its play. This it could have done. Make no mistake: In Round 1 it wasn’t the league as enforcer that settled things down. Brendan Shanahan’s 25-game suspension of Raffi Torres was shooting a fish in a barrel. The real enforcer was the public. They’d had it and they said so. They don’t believe Gordie Howe and Johnny Bower are wusses.