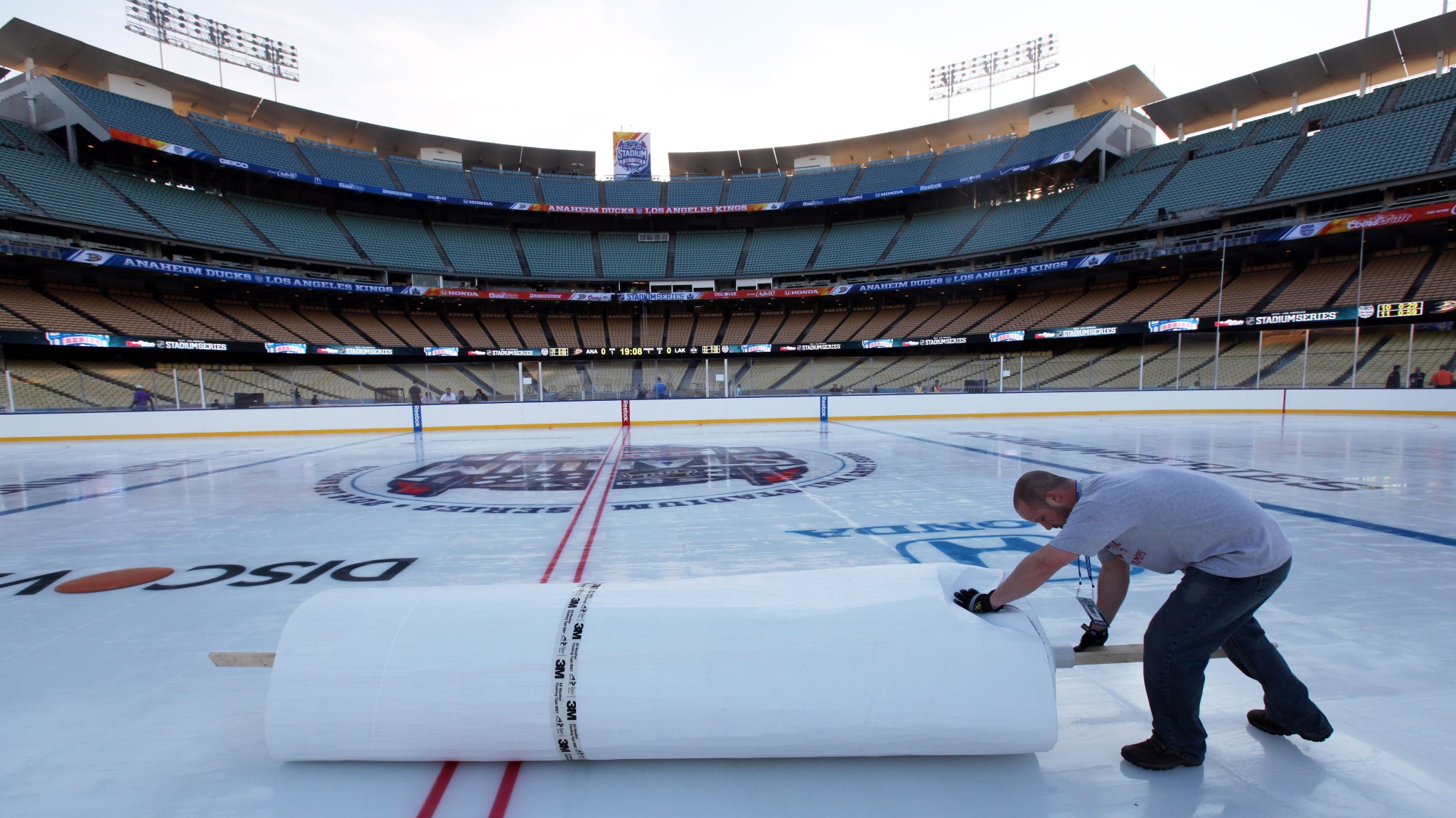 With the NHL well into its second half, the playoff races tightening, and the Sochi Olympics just weeks away, there’s just one question on the minds of most fans.

What’s that? You thought we were done with outdoor games for the year? Why, just because we already had the annual Winter Classic more than three weeks ago? Silly hockey fan. This is the NHL, where anything that turns out to be popular has to eventually be beaten into the ground until we’re all sick of it and every penny has been sucked dry.

This year, we still have five more outdoor games to go.1 Between the brand-new Stadium Series and the resurrection of the Heritage Classic, we’ll be talking outdoor hockey from now until the first weekend in March.

Overkill? Probably. But that doesn’t mean the individual games can’t still be plenty of fun. To prepare you for the coming onslaught, let’s take a look at all the key details for each of the five remaining matchups.

When and Where: Saturday at Dodger Stadium

Actual Selling Point: Because the game is in Southern California and the forecast calls for temperatures around 80 degrees, everyone will be waiting to see if the ice will melt and drown all the players. (It won’t.) (Probably.)

Novelty Factor: Extremely high, given the location and venue. And to their credit, organizers aren’t shying away from the warm-weather theme, even including a beach volleyball court and apparently aiming to “create a Venice Beach atmosphere.” I have no idea what that is, but I’m guessing it won’t involve toques and hot cocoa.

Fashion Police: As per tradition, both teams will use the outdoor game as an opportunity to introduce and market specially designed jerseys. The Kings have chosen a cheerful gray-and-black ensemble, while the Ducks are going with a head-to-toe orange. You can see both uniforms here. They’re … interesting. I’m doing my best to resist the urge to make fun of them. I’m pretty sure I can do this.

Non-Hockey Entertainment: Kiss will be performing live after the first period. Wait, the first-intermission entertainment will be some old guy from the 1970s in an outrageous costume yelling incoherently at the top of his lungs? How original.

Potential Problems: From all accounts, the preparations have gone fairly smoothly, though this week’s sudden flurry of “Hey, we really need everyone to purchase prepaid parking” messaging seems like an ominous sign, doesn’t it?

Why You Should Watch: It should be a legitimately great game between two very good teams with a genuine rivalry. Also, it will be your first chance to see a team dressed in bright orange at a baseball park since your 6-year-old’s last T-ball game. (Dammit. I tried.)

In a Perfect World: Darryl Sutter shows up in his typical outdoors wardrobe.

Prediction: We get a classic game, featuring a high skill level and plenty of intensity, that keeps getting interrupted at crucial moments by the beach volleyball accidentally getting knocked onto the ice.

When and Where: Sunday at Yankee Stadium

Official Selling Point: Outdoor hockey finally comes to the league’s largest city, as the Rangers and Devils renew their rivalry.

Actual Selling Point: Come see the Rangers play at Yankee Stadium against … someone.

Novelty Factor: Fairly high. Despite being the third outdoor matchup of the season, this will be the first time in its history that Yankee Stadium has hosted a hockey game.

Fashion Police: The Rangers will be wearing white jerseys with “New York” on the chest. The design is clean and simple. Nice job. Meanwhile, the Devils are apparently going to break out their red-and-green road jerseys from the 1980s and early ’90s, and if you know me, it goes without saying that I’m irrationally excited about this. Also, not even bothering to design new uniforms for an outdoor game is the most Lou Lamoriello thing ever. Can’t you just picture him barking “Just find some old ones!” at the terrified intern who mentioned it?

Non-Hockey Entertainment: The league is planning an extensive fan zone inside Yankee Stadium. It will be a pretty corporate-sponsor-heavy event by the sounds of it, but could still be fun.

Potential Problems: Henrik Lundqvist is sick right now, so we might not get to see his heavily hyped Yankees-themed mask. Though really, can anything that obscures Henrik Lundqvist’s face ever be considered a good thing?

Why You Should Watch: The Non-Penguin Metro Teams are all in a massive logjam for playoff spots right now, so any game between them is important. And the spectacle of a hockey rink in the middle of Yankee Stadium should be pretty cool.

In a Perfect World: After Derek Jeter and Andy Pettitte make an emotional walk out to center ice, a confused Jaromir Jagr has to explain that he’s not actually ready to retire yet.

When and Where: Wednesday at Yankee Stadium

Actual Selling Point: Come see the Rangers play at Yankee Stadium against … someone … else.

Novelty Factor: This will be the first time in three days that Yankee Stadium has hosted a hockey game. In other words, pretty much nonexistent.

Fashion Police: The Islanders jerseys are … not terrible. For this franchise, that’s progress. Also, Lundqvist is getting a little weird about the pads thing, right?

Non-Hockey Entertainment: Everything from the Devils game, basically, since the league is essentially treating the two games as one event.

Potential Problems: Seriously, did we need a second outdoor Rangers game just a few days after the first? And on a Wednesday night? Featuring the last-place Islanders? Apparently not, if rumors of slow ticket sales are to be believed.

Why You Should Watch: Other than 50,000 fans chanting “Potvin Sucks”? OK, while they’re still mired in last place in the Metro, the Islanders have actually turned into a fun little team to watch over the past month or so, and they’re not out of the playoff hunt yet. And if you’re American, this is your last chance to like John Tavares before he and the rest of Team Canada light you up at the Olympics next month.

Prediction: Hockey fans unanimously complain about the existence of this game and make a point of not watching it, which probably guarantees it will be the best of the group.

When and Where: March 1 at Soldier Field

Actual Selling Point: Read that last part again. I’m not really sure what else you want.

Novelty Factor: Iffy. This will be the fifth outdoor game of the season, not to mention the second time Chicago has hosted an outdoor game,3 and the third time the Penguins have played in one.4 But at least there will have been a full month since the last outdoor game by this point, so that’s something.

Fashion Police: Both teams are keeping it fairly simple, using their traditional logos and avoiding anything too fancy. The Blackhawks are going with a mostly black look that’s heavily based on their regular jerseys. The Penguins uniforms are white and will have a slight chrome effect on the logo that you won’t be able to see but will pretend to out of politeness.

Non-Hockey Entertainment: Nothing has been announced yet. In honor of these two teams’ shared history, may I suggest a looping clip of Rob Brown highlights?

Potential Problems: Not many, unless you were hoping to buy a ticket. The game reportedly sold out in less than 24 hours.

Why You Should Watch: Once again: Two star-studded franchises meet in a 90-year-old football stadium in a battle between arguably the two best teams in all of hockey. Other than that, no reason.

In a Perfect World: The Penguins and Blackhawks players are introduced two-by-two, and have to come out doing little action moves like in the NHLPA ’93 title screen.

Prediction: This should be a fantastic game, and a fitting end to the Stadium Series. Finally, we’re all done with outdoor games and can move on to focusing on … really? Still more? Wonderful.

When and Where: March 2 at BC Place Stadium

Official Selling Point: For the third time in history and the first since 2011, the all-Canadian Heritage Classic returns.

Actual Selling Point: Uh-oh … we’d better give Canada a game or else we’ll never hear the end of it. Quick, find two random teams and pretend it’s a rivalry!

Novelty Factor: Low, though Canadians will probably embrace it. And as an added twist, this will be the first NHL game held at a retractable-roof stadium, which means that it may not end up being an outdoor game at all.5

Fashion Police: In a very Canadian show of friendliness, the two teams unveiled their uniforms together. The Canucks will be sporting a much different look than usual, wearing burgundy jerseys with a large “V” on the front, in recognition of the Vancouver Millionaires. The Senators jerseys will feature a large “O” on the front, in recognition of how many Stanley Cups these two franchises have combined for.6

Non-Hockey Entertainment: Not announced yet, but we’re talking about Vancouver and Ottawa here, so we’re probably looking at Nickelback as the opening act for a VHS tape of old Alanis videos.

Potential Problems: “Sight lines at BC Place for a hockey game differ greatly from other events held at the stadium,” warns this page, which also seems to indicate that the cheapest seats are in the first few rows. Yeah, the people who get suckered into buying those seats from scalpers aren’t going to be able to see anything.

Why You Should Watch: If you’re Canadian, civic duty. If you’re not … well, these are still two pretty decent teams. The Canucks are holding on to a wild-card spot, and the Senators probably will be, too, by the time this game arrives, so the two points will be important.

In a Perfect World: An enraged but confused John Tortorella tries to fight Paul MacLean’s doppelgänger.

Prediction: The league uses this event as an opportunity to just go ahead and announce that, starting next year, every single NHL game will take place outside for the rest of time.