The Eleventh Day of NBA Christmas 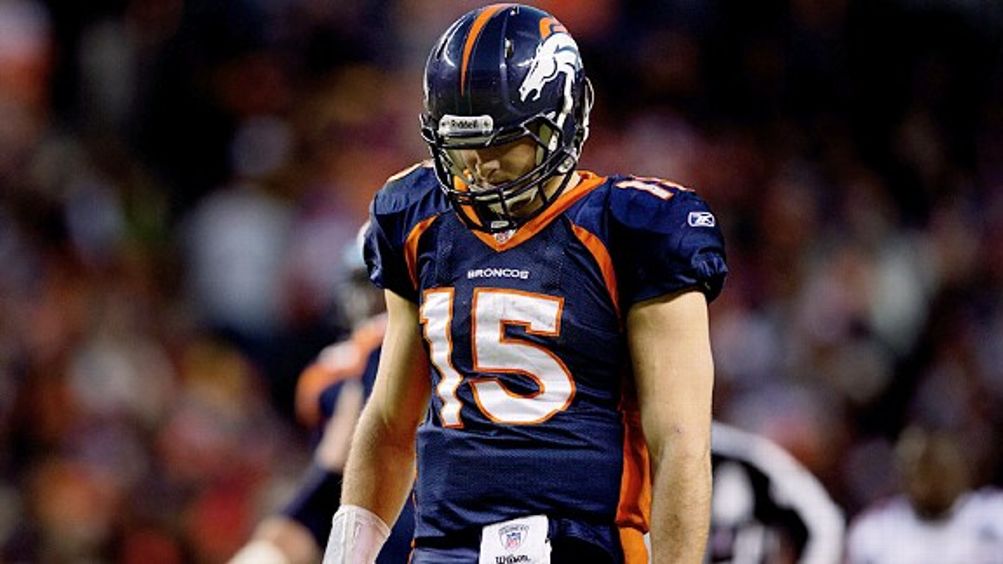 I don’t know what this means in the grand theological scheme of things, but the best play Tim Tebow made yesterday came in the third quarter, when his athleticism and his brains kept him from looking foolish on SportsCenter replays from now until the final trumpet sounds. With Denver already far behind New England, the Broncos had the ball on their own 2-yard line. New England’s Brandon Deaderick got in clean and had Tebow wrapped up for an obvious safety, but Tebow fought him off and got free, dropping the ball in the process. He picked it up and circled deeper into the end zone with a couple of Patriots still in pursuit. They had open shots at him, too, but they couldn’t bring him down, and Tebow still had enough left to throw a pass across his body with enough ginger on it that he avoided an intentional grounding penalty.

That was his best moment. Through a combination of athleticism and intelligence, he avoided a safety and he avoided a penalty. Otherwise, his team might have lost 43-23. Nevertheless, it was the most exciting play for no gain that I’ve ever seen.

(As such, it goes on the list with something I saw the late Steve McNair do in college. By an odd set of circumstances, I happened to be in Mississippi the day McNair played against what was then called Troy State in his last game at Alcorn. Midway through the game, McNair got flushed from the pocket, circled back about 30 yards, juked and faked his way through virtually the entire Troy defense, and then, at the end of the play, jumped over some dude for a 1-yard gain that was the greatest 1-yard gain I’ve ever seen. Now I have my greatest no-gain play to join it. I’m thinking of compiling a life list.)

Reading someone else’s mind, and then committing your thoughts on what they’re thinking to print, is always a mug’s game, but I don’t think I’m out of line in believing that it was something of a relief to Tebow yesterday to discover that all he really has established in his career is that he’s a inexperienced quarterback, albeit one with unique athletic skills and the throwing motion that Tim Robbins displayed in Bull Durham, who has far, far more to learn than he already knows. He does not yet play the position well enough to lead his team to a victory from behind against a really good team. (Note: Neither does Mark Sanchez.) My old friend Tony Kornheiser this week called Tebow “the most compelling athlete in America” and compared him to Magic Johnson. All I can say is that Mr. Tony is becoming easily compelled in his old age. (I may try to steal his wallet by e-mail.) In fact, and as was demonstrated yesterday, Tebow’s got more in common with Andy Dalton than he does with either Magic Johnson or St. John Chrysostom. And so we come to today’s reading, from the Gospel of Mark, Chapter One, Verses 35-38:

“Jesus got up, left the house and went off to a solitary place, where he prayed. Simon and his companions went to look for him, and when they found him, they exclaimed: ‘Everyone is looking for you!’ Jesus replied, ‘Let us go somewhere else — to the nearby villages — so I can preach there also. That is why I have come.'”

In other words, sooner or later, everyone gets tired of his own hype.

He was not the reason Denver lost 41-23 yesterday, although his inexcusable second-quarter open-field fumble helped open the floodgates. The Broncos defense picked a bad day to stop being the 1985 Chicago Bears. Tom Brady sliced and diced them for 27 straight points after Denver had started so well. Brady’s primary weapon was tight end Aaron Hernandez, who used to help Tebow provide Christian witness by stomping all over the rest of the SEC. With Denver geared to stop Rob Gronkowski, the other gifted young New England tight end, Hernandez had his best day as a pro — nine catches for 129 yards and a touchdown. There are a dozen good reasons why Denver is not as good a football team as New England, and the relative abilities of their respective quarterbacks is right at the top of the list. Tom Brady can control an entire game. The available evidence indicates that Tim Tebow can control a game just well enough to put his kicker in position to nail one from 59 yards to tie a team that yesterday lost by 24 points to the Seattle Seahawks. Compelling? Not as a player. Not yet.

But, of course, that was not what the past week was about, either. Tim Tebow became “compelling” because he became a character in the great national dumbshow that is our culture war. And we should be very clear about one thing — he wasn’t dragooned into this. Nobody drafted him. He walked into this role with his eyes open. Before he ever took a snap in the NFL, he appeared in an anti-choice television ad with his mother that was sponsored by Focus on the Family, an influential anti-choice, anti-gay-rights organization founded by the Rev. James Dobson. He knew what he was doing.

(Added historical curiosity: Dobson was playing in the pickup basketball game during which Pistol Pete Maravich was stricken and died. Strike two.)

Which made a lot of the chin-stroking about Tebow’s religion over the past weeks pretty much beside the point. It has been argued paradoxically that his faith is both vital to his success and off-limits to criticism. This is, of course, nonsense. He put his business in the street that way, and he did so by allying himself with the softer side of a movement that contains other organizations that the Southern Poverty Law Center, which knows about this stuff, recently designated as hate groups. There was considerable thumb-sucking about the propriety of criticizing — or, gloriosky, perhaps even mocking — Tebow’s conspicuous religiosity. This was an ironical moment in that it came in the week that journalist Christopher Hitchens died, and it was Hitchens whom I first heard say, although he may have been quoting someone else, that the only proper answer a journalist can give to the question “Is nothing sacred?” is “Yes.”

Of course, you can mock public religiosity. You can treat it with scorn and disdain. You can put a rubber nose and clown shoes on it. That’s a proud American tradition. Read Mencken. Read Mark Twain. Hell, read James Madison, never known in his day as a comic stylist, although he was said to have been great fun in small groups, and he did get the Gisele Bundchen of 19th-century political wives to marry him. Start him up on public religion, though, and the little guy was on fire:

During almost fifteen centuries has the legal establishment of Christianity been on trial. What has been its fruits? More or less, in all places, pride and indolence in the clergy; ignorance and servility in the laity; in both, superstition, bigotry and persecution.

Let us be quite clear — Tim Tebow adheres to a particular form of American Protestantism. He belongs to — and proselytizes for — a splinter of a splinter, no more or less than Mitt Romney once did. This particular splinter has a long record in America of fostering anti-Enlightenment thought, retrograde social policies, and, more discreetly, religious bigotry. To call Tim Tebow a “Christian,” and to leave it at that — as though there were one definition of what a “Christian” is — is to say nothing and everything at once. Roman Catholics are Christians. So are Lutherans, Episcopalians, Melkites, Maronites, and members of the Greek and Russian Orthodox faiths. You can see how insidious this is when discussion turns to the missionary work that Tebow’s family has done in the Philippines. This is from the Five Priorities of the Bob Tebow ministries, regarding its work overseas:

If religion comes into the public square, it is as vulnerable as any other human institution to be pelted with produce. Ignorance does not become wisdom just because you gussy it up with the Gospels.

It so happens that 95 percent of the population of the Philippines is Roman Catholic. Catholic doctrine just happens to be in conflict with what Bob Tebow and his son preach in regard to personal salvation. (To devout Catholics, for example, sins are not forgiven “by faith alone,” but through the sacrament of reconciliation as administered by a priest.) Bob Tebow’s goal is not to convert unbelievers. It is to supplant an existing form of Christianity. So who’s the actual Christian here? This is not an idle point to be made. Down through history, millions of people have died in conflicts over what a “Christian” really is, which is what so exercised Madison, and also what brought down a lot of Hitchens’ wrath upon religion in general. History says that as soon as you start talking about “the only true message” in this regard, you guarantee that, eventually, people will get slaughtered in the town square.

Earlier this week, some kids were suspended at a high school on Long Island for “Tebowing” — dropping to one knee in prayerful contemplation — in the hallways. Asked for his reaction, Tebow replied, “You have to respect the position of authority and people that God has put in authority over you, so that’s part of it. But I think it does show courage from the kids, standing out and doing that, and some boldness.”

First of all, God is involving Himself in how they select principals to run the high schools on Long Island? That’s a bear of an interview process right there. And you will note the obvious passive-aggressiveness in the second part of the answer. Obey your principal because God got him the job, but, damn, these kids are brave in their faith to defy the principal’s authority and, by extension of the first point, God’s. This is childish. It is silly. And it also makes my head hurt.

If we’re going to have a real discussion about the place of public religion in our public spectacles, then let’s have one instead of some mushy, Wonder Bread platitudes about how great it is that Tim Tebow talks about Jesus and doesn’t get caught doing strippers two at a time in the hot tub. If religion comes into the public square, it is as vulnerable as any other human institution to be pelted with produce. Ignorance does not become wisdom just because you gussy it up with the Gospels. If we keep faith with those American values, then we might just let him off the hook enough to see if he simply can become a better quarterback than Andy Dalton.

Previously from Charles P. Pierce:
The Stupidity (and Sexism) of Baseball’s Media Dress Codes
The NCAA and Nostalgia
It Wasn’t (Just) About the Money
The Tailgate and Modern America
The Brutal Truth About Penn State
The Decline of Horse Racing
The Beginning of the End for the NCAA