Bane of the ballpark

You’re probably tired of reading those “Where did these guys come from?” stories about the Seattle Mariners, who valiantly clawed their way to baseball’s best record earlier this season, despite losing Randy Johnson, Ken Griffey Jr. and Alex Rodriguez over the past three years.

For most baseball fans, Seattle’s spring surge was more inexplicable than Colby voting off Keith over Tina on “Survivor” last week. How can a franchise prosper after losing three of the biggest stars in baseball? How does this make sense?

I have a three-word explanation for you: “The Ewing Theory.”

Here’s everything you need to know about the Ewing Theory, in the form of a Q & A:

What’s the Ewing Theory? Where did it come from?
The theory was created in the mid-’90s by Dave Cirilli, a friend of mine who was convinced that Patrick Ewing’s teams (both at Georgetown and with New York) inexplicably played better when Ewing was either injured or missing extended stretches because of foul trouble.

Curious to see if this phenomenon applied to other stars/teams, Dave noticed people were pencilling in the ’94-’95 UConn Huskies for a .500 season because “superstar” Donyell Marshall had departed for the NBA. Dave knew better; a lifelong UConn fan, he thought the Huskies relied too much on Marshall the previous season and could survive without him. Like Ali predicting the first Liston knockout, Dave told friends the Huskies would thrive in Marshall’s absence — and that’s exactly what happened. By midseason, UConn was ranked No. 1 in the country for the first time in school history; the Ewing Theory had been hatched.

Dave introduced me to the Ewing Theory three years ago, and we’ve been tinkering with it like Voltaire and Thoreau ever since. Eventually, we decided that two crucial elements needed to be in place for any situation to qualify for “Ewing” status:

When those elements collide, you have the Ewing Theory.

What’s the best example of the Ewing Theory? 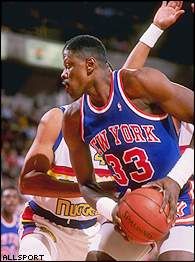 That’s easy. During the ’99 NBA Playoffs, Ewing tore an Achilles tendon during the second game of the Eastern finals against Indiana. With Ewing finished for the playoffs and nobody else on the Knicks who could handle Rik Smits, the series seemed like a foregone conclusion. As an added bonus, since Ewing himself was involved, that made this the ultimate test of the Ewing Theory; in fact, I e-mailed Dave that week to say, “This is the greatest test yet.”

Dave’s return e-mail oozed with confidence, as he told me in no uncertain terms, “Ewing’s injury is the best thing that ever could have happened to the Knicks — they’re definitely making the Finals now.”

So what happened? The Knicks won three of the next four and advanced to the NBA Finals for only the second time in 26 years. Had Jeff Van Gundy’s crew shocked the Spurs in the Finals without Ewing, Dave might have his own line of “How-To” videos out right now (a Knicks upset was simply too tall of a task against Duncan and Robinson, Ewing Theory or no Ewing Theory).

What are other examples of the Ewing Theory in action?
Some classics from the past three years, in no particular order:

2. Tennessee Volunteers, 1998: Even more ballyhooed than Van Horn during his college career, Peyton Manning leaves UT without either winning a national title or beating Florida — and the Vols win the national title nine months later.

4. Boston Red Sox, 1999: After Mo Vaughn signs with the Angels for $80 million, nobody believes that the Sox have enough hitting to finish above .500. Wrong. They roll off 94 victories, capture the wild-card berth and win their first playoff series in 13 years (beating Cleveland in five games).

5. Miami Dolphins, 2000: Dan Marino retires and everyone prepares for a rebuilding year in Miami; the Fins end up advancing to the second round of the playoffs with Jay Fiedler. Jay Fiedler! 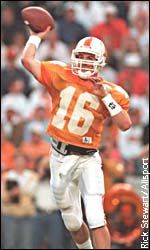 6. Philadelphia Flyers, 2000: After losing superstar Eric Lindros to a serious concussion in mid-March, the Flyers hold on for first place in the conference and defeat Buffalo and Pittsburgh in the playoffs. In the conference semis, the Flyers take a 3-1 lead when rumors swirl about a Lindros return. Stunned, the Flyers drop Game 5 at home, as Dave and I send frantic e-mails back and forth. Lindros finally returns in Game 6, and the Flyers squander that one, too; now people are blaming Lindros for killing Philly’s momentum. In the climactic Game 7, the Flyers get expunged as Lindros gets knocked out with another concussion midway through the game. Season over.

7. Boston Red Sox & Seattle Mariners, 2001 (ongoing): Written off after Nomar Garciaparra‘s wrist injury and Alex Rodriguez‘s departure, both teams cruise to the top of their respective divisions during the first five weeks of the season.

8. University of Kentucky, 1998: One year after the departures of Rick Pitino, Derek Anderson and Ron Mercer, the Wildcats never miss a beat with new coach Tubby Smith and went on to beat Utah to win another NCAA title.

9. St. Louis Rams, 1999: Starting QB Trent Green tears an ACL during the preseason. Given up for dead, the Rams rally behind former Arena League football star Kurt Warner and win the Super Bowl, which might be the most unbelievable thing that ever happened..

10. Detroit Lions, 1999: Stunned by Barry Sanders’ retirement in August, everyone gives up on the Lions for the ’99 season. The Lions respond by sneaking into the NFC playoffs.

What are some famous examples from the last few decades?
In no particular order:

1. The LA Lakers, 1972: NBA legend Elgin Baylor retires before the season without ever playing for a championship Lakers team. Of course, the ’71-72 Lakers end up running off a record 33-game winning streak en route to their first-ever NBA title in L.A. Seriously, you couldn’t make this stuff up.

2. Virginia Cavaliers, 1984: Three-time Naismith Award winner Ralph Sampson graduates without ever leading Virginia to a national championship. Amazingly, the Cavs regroup the following season behind Othell Wilson and Rick Carlisle, going just as far as Sampson ever took them by sneaking into the Final Four. A Hall of Fame Ewing Theory example 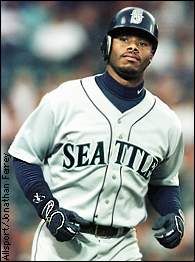 3. N.Y. Yankees, 1996: Yankees icon Don Mattingly retires without ever playing in a World Series game. The Yanks replace him with Tino Martinez and immediately roll off four of the next five World Series titles, as Mattingly joins a weekly support group with Buck Showalter.

4. Cleveland Indians, 1997: Superstar slugger Albert Belle signs with the White Sox as a free agent. Eschewed as a threat to win the World Series without Belle, the Indians respond by making it all the way to the seventh game of the ’97 World Series.

5. World Wrestling Federation, 1997: Then-WWF champ Bret “Hitman” Hart signs a contract with Ted Turner’s WCW federation (No. 1 in the TV ratings battle at the time). Aided by publicity from a real-life, backstage fight between Hart and WWF owner Vince McMahon after Hart’s final match, the WWF rebounds in the Post-Hart Era and regains its No. 1 status within a year. Ironically, Hart’s departure is considered the crucial turning point, because it gave birth to McMahon’s new “bad guy” status and paved the way for the WWF to promote fresh stars like “Stone Cold” Steve Austin and Shawn Michaels. Even in fake sports, the Ewing Theory is indomitable.

Currently, who are some possible Ewing Theory candidates?

All right, I’ll bite. Remember, we’re targeting stars on teams that haven’t won anything, as well as teams that would probably be written off without the stars we’re about to mention: