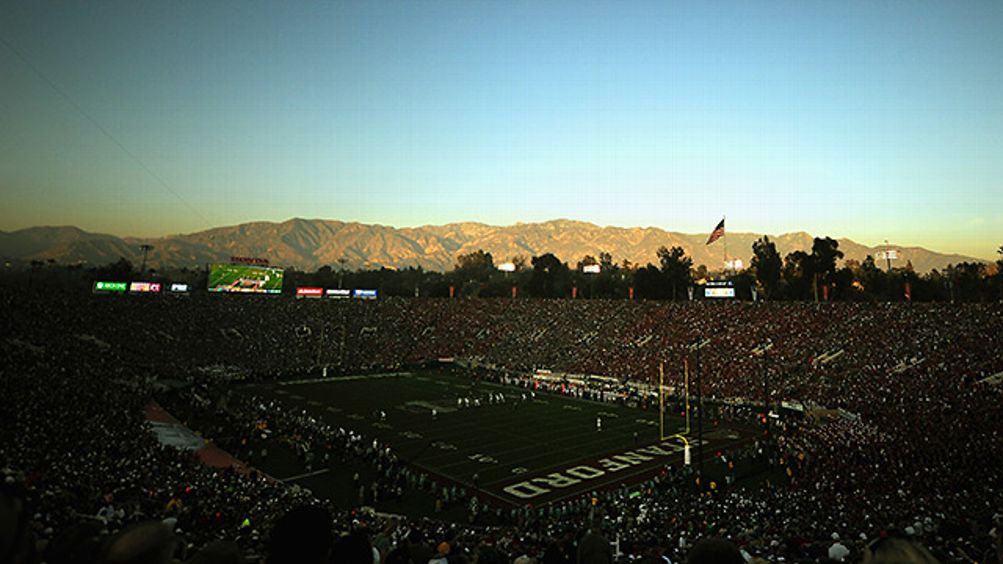 We hadn’t been to the Rose Bowl for an actual Rose Bowl until yesterday, and since this is the Internet, you may understandably react with contrarian irritation to hearing that it’s as mesmerizing as advertised. It’s like walking around in the middle of a sports movie, one that’s advertised incessantly in hurried television spots with “HEARTENING!” and “THE BEST MOVIE YOU WILL SEE ALL YEAR!” and “CURED MY ROSACEA!” flying across the screen in metallic all-caps text. And there’s a natural temptation in a place like this, once you’re good and ensorcelled, to make the game match the staging.

Amplifying this instinct are round numbers, visual cues, tidy organic story lines, and the ends of eras: It’s the 100th Rose Bowl. There’s a Red Team and a Green Team, the former charging into its fourth consecutive big-money bowl, the latter clawing in off a quarter-century dry spell. It’s the final Rose Bowl of the BCS era, before the game is folded into the playoff rotation following the 2014 season. And we wanted it to be good. We (royal we) might have been lured into burnishing a lackluster game, because we (people) want these things to Matter. It’s silly, but it happens.

That choice was taken from us on Wednesday. The Granddaddy didn’t need our help. The Spartans and Cardinal staged what will be called a “classic,” but would probably be more appropriately termed a “blockbuster” — a blockbuster in the cinematic sense, and a blockbuster in the sense of its component words, with large blockish objects with sharp corners attempting to break other large blockish objects into smaller pieces.1 Did you see the first Wolverine movie? The one that consisted almost solely of Hugh Jackman and Liev Schreiber running toward one another and jumping in slow motion to collide in midair and exchange scratches? Michigan State–Stanford was that, but with more believable special effects.

Take Kevin Hogan and Michael Rector, connecting for a 43-yard pass on the game’s second play from scrimmage, which the Cardinal used to construct a 77-yard touchdown drive on their opening possession. It was a flurry of positive yardage that frankly seemed a little uncouth for a setting like the 100th Rose Bowl, but three punts and a field goal later, order was restored.

Order is overrated, but there’s a way to play old-man football and put on a follies show at the same time. To stage a barn burner, but with a barn that’s been converted into a guesthouse and tastefully furnished. A shootout, but with cannons. The Rose Bowl achieved this equilibrium late in the second quarter, when Cardinal linebacker Kevin Anderson, who’d already come perilously close to intercepting Connor Cook in the first quarter, picked off a pass for real and rumbled 40 yards for six, and then a minute and a half later, this happened:

It was a moment straight out of a slasher flick, with Cook as the comely heroine, pursued by a silent killer played by Cardinal linebacker Joe Hemschoot, and the audience can see he’s coming and the tweens in the back row take a break from making out to scream HE’S BEHIND YOU HE’S RIGHT BEHIND YOU RUN RUN JESUS GOD WHAT’S WRONG WITH YOU RUNNNNNN, only then the heroine throws a touchdown pass.

Halftime came and went. The Stanford band formed the Snapchat ghost at midfield. You had to be there. The view from the top of the stadium morphed from earthy brown to slate blue to inky charcoal, overlaid with haze. The world narrowed to the concentric rings of the Rose Bowl experience: the San Gabriel mountains and the forested hills, then the lights, then 95,000 shouting fans, then a layer of smoked-meat scents unbelievable for a game not containing an SEC squad, then the field. Haymakers and boneheaded happenings were swapped with gusto. Bennie Fowler slap-fighting defenders for a good 40 yards of a 60-yard catch was followed in short order by another sack on Cook, a game-tying field goal, a Hogan interception, and a Cook interception negated by a holding penalty. Heading into the fourth quarter, following three consecutive Tyler Gaffney rushes into a Cardinal three-and-out, Red Team and Green Team remained tied, 17-17.

Either time sped up from here or the rush-pass ratio did, because the next thing we knew, Michigan State had achieved a bit of history with this Tony Lippett touchdown:

That’s the first touchdown Stanford has allowed this season on a drive started in Cardinal territory.

The Cardinal would settle for a field goal with just more than four minutes remaining and get the ball back still down four with 3:06 on the clock. Three rushes from three different carriers and two timeouts later, with 1:46 to play, we found ourselves positioned at a weird angle to see what would happen next.

These are Stanford’s offensive linemen. The shrimpiest among them stands 6-foot-3 and weighs 286 pounds. Behind them lurked fullback Ryan Hewitt, who has three inches and 20 pounds on Gaffney. On fourth down, with one yard needed to extend the team’s last shot at a go-ahead score, the Cardinal started coming toward us — and were blotted out by green.

We saw the back of Kyler Elsworth, the linebacker tapped to replace suspended defensive star and captain Max Bullough, scale a pile of green and white jerseys like a burly tailback on a goal-line charge, and then the sound wave hit the windows. The monitors played it over again, in slow motion, in what would be bullet time in a movie theater: Elsworth and Hewitt, colliding in midair with enough force to expand the periodic table. Colliding, said the officials, behind the first-down line.

Cook knelt twice, and senior quarterback Andrew Maxwell trotted out for the Spartans’ final victory formation. Flashbulbs lit up the stands, augmented by howitzer blasts from the sideline glitter guns. Stanford fans cleared out in an astonishing hurry. Giant swaths of seats appeared, as if their occupants had teleported away. It is Stanford. Perhaps they did.

The platform for the trophy ceremony was hastily erected. More glitter cannons appeared. Centuries from now, intrepid explorers will find our bodies entombed beneath vast mounds of sparkly paper shreds. They will wonder what diabolical ritual brought about the shimmering death of so many onlookers. They will marvel at the preservation of the floral arrangements. Our long-dead lips will breathe no answers.

We’d been told stories of signs in the public parking lots warning patrons who lingered more than 90 minutes past the game’s end that their vehicles could be towed. Undaunted, at 7:30 in the evening, Pacific time, stray clumps of fans lingered in opposite corners of the stadium, watching the crisp semicircles and mild dancing of the Spartan band, and the ragged LSJUMB arc and Dollies kick line. Security guards maintained their rope line around the midfield logo, which disappeared long before midnight. The turf, which looked nearly untouched, was pulled up section by section. Entirely new sod will be brought in and laid down for Monday night’s Florida State–Auburn BCS title game tilt. This is the Rose Bowl, and immaculate is the only standard.

While we swooned to old-man football, a new-money upset erupted in Arizona. Bryan Curtis was there. This is his story. Here is Bryce Petty scaring the bejesus out of his mama:

The Rest of the Blessed

• Sugar Bowl: No. 11 Oklahoma vs. no. 3 Alabama (January 2, 8:30 p.m. ET, ESPN). For impartial observers bent on giggling at somebody’s gross misfortune, there’s a high win-win probability here: Either Bob Stoops’s Year of Feeling Out Loud ends with a prime-time loss to an SEC team that didn’t even win its division, or the Crimson Tide extend their losing streak to an unheard-of two games and plummet to a galling 11-2 record for the season, which will make for excellent drive-time radio entertainment as caller after caller wonders whether Nick Saban is the Man for This Job After All.2

• Cotton Bowl: No. 13 Oklahoma State vs. no. 8 Missouri (January 3, 7:30 p.m. ET, Fox). A better-looking matchup than a couple of the big-money games, the Cotton comes preloaded with its own big-play reaction GIF.3 We’re expecting a lot of these, as well as a game played with all the intensity of Mizzou players receiving iPad minis.

Between the use of Papa John’s to assuage hurt feelings and the flu bug that went on a merry tear through the ranks of the Buckeyes, it’s been a rough month for the guts of Ohio State.

We got a reader email from a “Greg” shortly after the bowl pairings were announced, in which an intrepid Clemson fan suggested Dabo Swinney take a swing at somebody early on in Miami, to balance the histories but mostly “to establish dominance.” We are interested to know how Greg managed to form the image in his mind of Swinney striking another living thing in anger; as of this writing we have not ourselves managed it.

Counting down the best of the bridge between that year and this:

7. An encounter between Logan Thomas and Myles Jack, with results unexpected to perhaps both players and certainly to the viewing audience.

“He had no business producing a wine this subtle and mature. Not in that soil. But then, that’s why they call him Johnny Zinfandel.”

2. The Outback Bowl was Jeremy Hill’s show, but when we asked how prepared Odell Beckham and Jarvis Landry were to make Anthony Jennings look good, this is pretty much exactly what we had in mind:

Get paid. And stay this way forever.